Timing is everything! As noted in Victorian Spiritualism: Arthur & George, I was totally mesmerised by Arthur & George, a novel by Julian Barnes. Now Heritage Magazine (May 2009) has presented an article called The Chronicles of Conan Doyle, based largely on work published by Doyle’s biographer, Andrew Lycett. 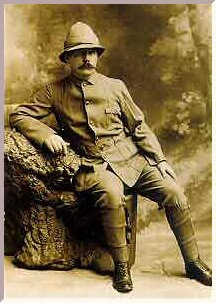 Other than the importance of Sherlock Holmes as a character, several significant issues arose in the article that need attention. Firstly Arthur Conan Doyle (1859-1930) drew upon his experiences as a phys­ician. Murder Mystery blog noted that just months shy of graduating, Doyle made the adventurous decision to accept a posit­ion as a surgeon on a whaling ship heading to the Arctic. Grist for his later mill.

Even when he gave up medicine to write full time in 1891, he was still committed to his concept of national duty. When the chance came for him to join a hospital unit that had been put together by a medical friend in the Boer War of 1900, Doyle jumped at the chance, even though he had to do so at his own expense. At least two significant books came out of his work as a military doctor: The Great Boer War and Great Britain and the Next War. 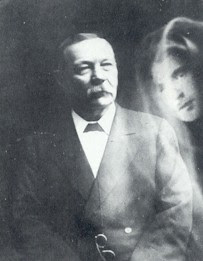 Secondly Doyle turned to spiritualism during very trying periods in his life that were filled with loss and mourning. His first wife was diagnosed with tuberculosis in 1893, forcing them to emigrate so she could receive top class treatment. As the very same time, his own father died. It is no coincidence that Doyle joined the British Society for Psychical Research in 1893.

Then in World War One, his family was again devastated by death. Doyle’s beautiful young son, Arthur, was killed, as was his brother and two of his nephews. The war was a nightmare for all families, but Doyle’s family seemed to lose more than its fair share of young men. Victorian Paintings noted that mediums could call the spirits of loved ones in to sit for a picture, so so-called spirit photos would have been precious.

I haven’t read The History of Spiritualism, a reference book that Doyle wrote in 1926. If he really did dedicate himself to the cause of spiritualism in later life, perhaps he feared he only had a few years of life left. Armchair Travel blog cites Conan Doyle in that that it really matters what people think. Conan Doyle believed that what people think is not just what occurs to them. They can actually direct their thoughts into creative and even inspirational channels.

Many people took up spiritualism after the First World War, which is hardly surprising as many not only lost family, but couldn't mourn properly as many of the dead were never recovered.

Criticism of Doyle and his gullability as far as Spiritualism is concerned, always seemed harsh to me. Not many could have any idea as to what Doyle was going through at the time, and if he seemed to gain comfort from Spiritualism, despite the charlatans, who are we to criticise?

The brutal facts of life are not always acceptable.

I agree. Machine gunning 18 year old boys as they run over the top of their trenches, by their thousands, is an obscenity that we can hardly grasp.

And you are correct about not being able to mourn properly. That certainly led to the creation of public war memorials in every city and town in Britain, Australia and every other country that lost its best young men.

But Doyle was already showing signs of stress and spiritualism in the early-middle 1890s.

My guess is that he was clinically depressed and handled it as best he could. He had given up his core career; he had risked his financial stability in a new career; he was married to a very very sick woman whom he was cool about; and he could rarely see the woman he was passionate about. Then his dad died and he was responsible for his mother.

I would have been searching around for answers too :(

You are excluding the possibility that it might be true of course! I have read his book and he certainly did and endured a lot of ribbing over his involvement with the Cottingley fairies but he stuck to his beliefs and lectured widely on both subjects. It was a widely held belief at the time with scientists such as Oliver Lodge actively investigating it.

I agree, Hermes. After all, 'there are more things on heaven and earth...'

Those Cottingley Fairies girls certainly fooled everyone, however! I still like to believe in the idea of fairies...

I had a quick look at your beautiful blogs and I'm very glad to have found you.

Thanks Viola, I love that picture under the Jacaranda tree on your blog. I try to keep an open mind, but I am more concerned that we try to assess historical figures on their own terms, not ours.

Holmes was also a friend of Harry Houdini, who, some people argue, used his crusade to "debunk" phony spiritualists as a cover for his own belief in the possibility of communicating with those beyond the grave.
Incidentally, the quotes I used in Armchair Travel came from 'Conan Doyle's Wallet' by Patrick McNamara.
Doyle says so many people have envisioned Sherlock Holmes that he often runs into him over there in the great beyond.
It's great to find fellow fans of ACD.