My husband was a young lad in Jablonz Czechoslovakia (now Czech Rep­ublic) although his parents’ home was actually near Munkachevo (now Ukraine). The family had a particular affinity for Alfons Mucha 1860 -19139 who was born in the town of Ivancice, Moravia, then part of Austro-Hungary (now Czech Republic).

Young men seemed to travel very easily back then because in 1877, Mucha applied to the Academy of Visual Arts in Prague. When that failed, he soon got a job in Vienna as an assistant in a firm that made theatrical stage sets. In 1884, after touring northern Italy and Austria with his noble patron, he studied at the Academy of Visual Arts in Milan.

But it wasn’t until 1888 that Mucha first visited Paris, the artistic and cultural capital of the universe. Like many an expat before him, Mucha studied at the Academie Jul­ian and the Academie Colarossi. But his parents couldn’t support him so he needed a real job. Mucha began to draw illustrations for books and magazines. An artist must eat, pay for rent, buy clothes and drink, so it wasn’t long before the painter designed his first advertising poster.


Advertising might have been selling out to the enemy, but the work was profitable and it could also be quite creative. Examine an image he created for a beer company, Muchian to be sure, but blatantly commercial. And visit the Old Paint blog which has a gorgeous advertising poster called Papier a Cigarettes: Job,1896. The young lady's flowing golden tresses actually merged with the picture frame! 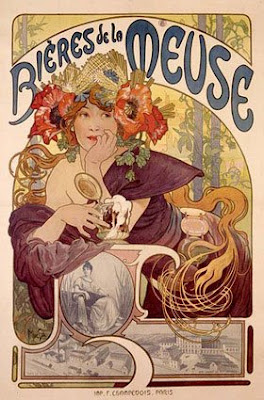 
Mucha made his name for designing a poster for the show Gismonda of the hugely popular stage actress Sarah Bernhardt in 1894. Poster-printing was well known in Paris, usually consisting of large amounts of text with a few simple illustrat­ions, in few colours. The Gismonda poster, on the other hand, was utterly different. The col­ours were confident, the line very vertical and the details were profuse. The gorgeous Sarah Bernhardt was so impressed with his work that she im­mediately offered Mucha a long contract. He was responsible for all her posters during the 1890s, as well as the stage sets and costumes at the Theatre de la Renaissance, where Bernhardt worked.

The Calladus Blog was delighted with Mucha, writing that Mucha's style of bold, sensuous lines and bright colours, coupled with nat­ural and idealised decorative elements were a perfect fit for litho­graphy and for the decoration of the rest of the world. The precepts of his art were quickly incorporated with other Art Nouveau concepts for the design of everyday items, from chairs to bus stations. But Mucha just painted as he pleased.

The Written Word blog was more measured, noting that Mucha specialised in a decorative and romantic style of illustration. His works evoked old world charm and mystery, and were often based on elemental designs. His style was particularly feminine: the fashion, fauna and ornamental bordering. 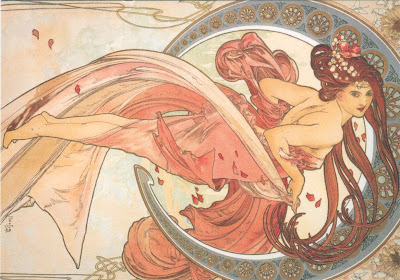 Magazine History: A Collector's Blog reported that Mucha’s magazine work was limited and, naturally, it appeared in French periodicals for the most part. Happily Steve found a few Mucha images reprinted on the covers of American magazines: Burr McIntosh Monthly, Literary Digest and Hearst's.

Timing is everything. Mucha wanted to design a spectacular series of elaborate jewels, to be created by Georges Fouquet in Paris. Those jewels did in fact form the centrepiece of Fouquet's display at the 1900 Exposition Universelle in Paris. Mucha also designed the Bosnian Pavilion in the same World's Fair. As soon as the Exposition was over, Mucha set about publishing Documents Decoratifs, passing on his artistic theories to a keen audience of young students and artists. 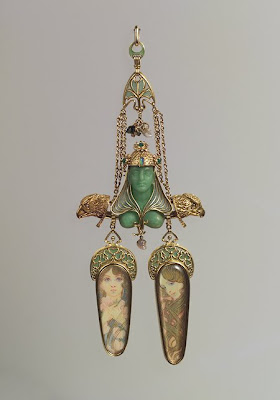 Art Nouveau had nowhere to go in the new century. When Mucha travelled to his homeland, visiting Moravia and Prague in 1902, he seemed to become excited about painting a series of historical patriotic works, visualising the Slavs in a neo-classical style. This project consumed so much of his time and energy that the once-extremely popular artist tended to disappear from the art world. I stopped following his work at this stage.

The world´s first Mucha Museum, dedicated to his life and times, is not in Paris. Rather it is housed in Prague's Kaunický Palace, appropriately for a Czech lad.

To Steve Lomazov
Hi Steve
I don't know if your Mucha cover is right up there with the most valuable. In fact I don't even know if it was 20th century or not. Do you have a date?

But I've made a link to your post because (my guess is) Mucha would be very well known by European contemporaries, not American. Perhaps the editors saw Mucha on his tour to the USA and loved his work.

The Mucha magazine is sells for a few hundred dollars. The literary digest cover was used multiple times and sells for much less. The Hearst Cover is my personal favorite of all magazine covers.

Thanks for your interest.

Apart from Art Nouveau, Gismonda seems to have a relationship in design and colours to an old mosaic craft shop we passed in the eleventh arrondissement. Not very well photographed in the link below. I'm new at this so I don't know if it will work

I am a fan of French poster art. Mum used to have it as a wallpaper in our house when I was eleven ! :D

Thanks for visiting my blog, I loved the story about you and your Hub.

Great article, an interesting read. Thanks for referencing my review!

The works by the iconic Alphonse Mucha, which have not been seen in the UK for almost 15 years, will be displayed at Russell-Cotes Art Gallery and Museum, Russell Cotes Road, Bournemouth. From 1st April 2015 until 27th September 2015, see a world exclusive new retrospective "Alphonse Mucha: In Quest of Beauty".

Perfect location .. an Edwardian dream house on a cliff-top, overlooking the sea. And what a connection with Mucha.

The actor Sir Henry Irving (died in 1905) was a friend of the Russell-Cotes. Items purchased at the sale of Irving's effects formed the basis of the Irving Museum and were displayed with memorabilia associated with his contemporaries eg Ellen Terry and Sarah Bernhardt!!

A new art blog Vermillion Goldfish did an in-depth look at In Quest of Beauty, the latest exhibition of Alphonse Mucha’s work that explores the theory of beauty that inspired the artist’s iconic portraits. The post offers valuable insight into Mucha’s work and explains his personal perception of beauty. For Mucha, beauty was all about idealized femininity and serenity of expression.