Augustus, Elector of Saxony 1670–1733 is one of my favourite royals because he was one of the truly great patrons of the arts and arch­it­ecture. Dresden hadn’t been the centre of world culture before Augustus, so he quickly got involved the age-old royal method of paying artists, scientists, histor­ian, philosophers and musicians to move to his court.

Anyone who has vis­ited his amazing baroque palace in Dresden, and seen his collections, cannot fail to be impressed, as shown by Guy Michael Davis and The Arkansas Traveller. The Zwinger, for example, was designed by Matthaus Pöppelmann. It took from 1710 until 1728 for the three wings to be completed, used predominantly for impressive display galleries and libraries. It might have been a bit far-fetched to refer to Dresden as Florence on the Elbe, but Augustus would have loved the label. 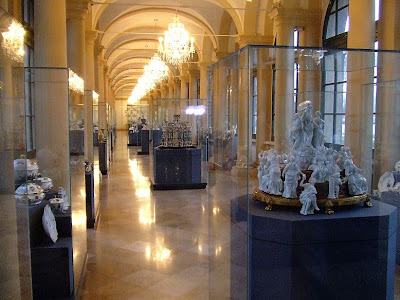 Zwinger Porcelain Displays
Write Antiques proposed that as Augustus II was a great fan of the Chinese pots, he spent a fortune on purchasing a collection of 20,000 pieces. The collection utterly filled his palaces and storerooms. Chinese porcelain was clearly the definitive symbol of prestige, luxury and good taste. But Augustus could envisage a day when the royal budget could not afford another ship load of porcelain objects. He desperately needed to discover the secret of porcelain for himself, presumably with a view to producing the precious artwork in Dresden or Meissen.

My students will be reading Janet Gleeson’s book The Arcanum over the long holidays. I refer blog readers to it now. Gleeson investigated the invention of European porcelain and the founding of the Meissen Porcelain Manufacture outside Dresden. Here is the review from Publishers Weekly:

“Who would have thought that the story of porcelain would be such a rousing tale of wealth, intrigue and outrageous greed and gluttony? In a deserted German mountaintop castle called Albrechtsburg in the town of Meissen, a brilliant C18th apothecary and alchemist called Johann Frederick Bottger discovered the secret for making por­celain, which was the next best thing to gold at the time in Eur­ope. Like many other alchemists then, Bottger had once untruth­fully claim­ed to have found the secret formula for turning base metals into gold. But for Augustus, who promptly imprisoned the young scientist, the arcanum for porcelain or china, would have to suffice. Gleeson's story of how Meissen became the West's first por­celain centre follows a colourful cast of characters: the lascivious Augustus; two rival decorative artists, Johann Gregorius Horoldt and Johann Kaend­ler, who applied their skills as diligently against each other as they did in creating precious porcelain objects; and gold­smith Christo Konrad Hunger, a hard-bitten profiteer who’d happ­ily stoop to intimid­ation, threats and all manner of chicanery if he needed to. Greed for money, fame, porcelain or power seems to have motiv­ated everyone associated with Meissen. A delightful historical narrative”.

A couple of years passed, and with the assistance of miners and metal workers, Bottger’s experiments with different clays cont­in­ued. The breakthrough was not achieved until 1708 when two loads of minerals finally changed pottery into porcelain: kaolin, and alab­as­t­er as flux material. A delighted Augustus was informed and Böttger’s success came when he was made head of the first porcelain factory outside Asia. 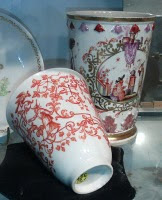 Meissen flowers and animals, 1730
Alas poor Bottger died in 1719 and Johann Gregorius Höroldt soon became the director at Meissen. It was Horoldt who introduced the brilliant colours that made Meissen porcelain so deservedly famous.


The three wings of the Zwinger were not enclosed until Prof Gott­fried Semper built a neoclassical building for the fourth wing. Called the Semper Wing, it was built in the C19th to host the Gemälde­galerie Alte Meister art gallery. Spanish, It­alian, German and French masterpieces were collected from the Kunstkammers in princely castles and palaces, a perfect partner for the splendid porcelain and architecture. 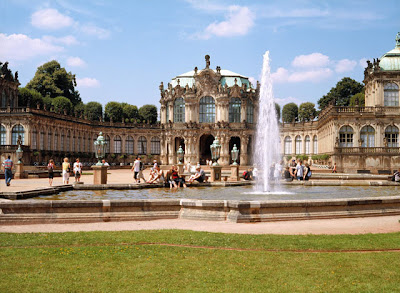 Didn't "we" destroy a lot of china when we bombed Dresden?

I cannot imagine why 18th century architecture presented such a threat to the Allies, but the city was indeed largely razed to the ground.

That leads us to two conclusions.
a] that all the porcelain and painting treasures were put underground for safe keeping during the war, because the collections seem to be intact today. And

b] The surviving citizens of Dresden wanted to rebuild the architecture exactly how it had been before WW2, rather than rebuilding in the Soviet Brutal style of the 1950s.

The nearby town of Meissen, although historically very different from Dresden, is also an essential destination for those interested in the history of porcelain.

Thanks for raising the discussion
Hels

To Christopher Proudlove of WriteAntiques:

I couldn't find a space for comments under your post on Meissen porcelain. Thus the email.

Thanks for the article and the good quality photos.

But mostly I added your post to my blog because finally someone has quantified the amount of Chinese porcelain that Augustus owned. It is one thing saying he was denuding the state budget, because of his porcelain obsession, but it was another thing finding how many pieces of Chinese porcelain he actually owned.


Dear Helen
Thank you for your email, it's always a pleasure to hear from a reader, particularly one who pays me compliments. Sorry about the lack of comment space. As it happens. I am currently in the process of migrating the wesbsite to my own domain at www.writeantiques.com. Work in progress, but it should resolve the issue. Good luck with your own very elegant Blogspot.