The Bauhaus Moved to Tel Aviv

When Tel Aviv was recognised as a city in 1921, Meir Dizengoff was elected mayor. He remained in office largely till his death. Sir Patrick Geddes (1854–1932) was a Scottish urban planner. Having publicised his Cities and Town Planning Exhibition 1911, Geddes lived mainly in India, where he was involved in town planning work. Geddes was not Jewish, but he was very familiar with the Old Test­ament and was committed to Utopian ideals that could be applied to the new Jewish homeland. 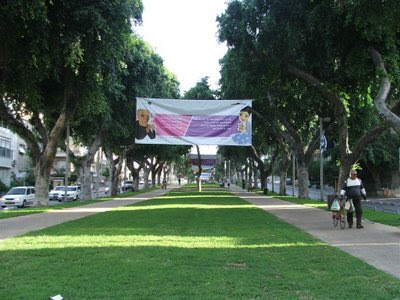 In 1925 Mayor Meir Dizengoff asked Geddes to submit a mas­t­er plan for Tel Aviv. The city limits he worked to were the Yarkon River in the North and Ibn Gvirol St in the East, the original boundaries of the city. Ged­des presented a fascinating report in 1927 which was quickly ap­prov­ed by the City Council. He brief was to cr­eate a European Garden City for 40,000 citizens. Geddes’ plan provid­ed wide, main streets on a grid pattern, single plots for family homes, small pub­lic gar­d­ens in the side streets and open access to the beach. And Ged­des sp­ecified mixed residential-commercial use, at least on the main roads. 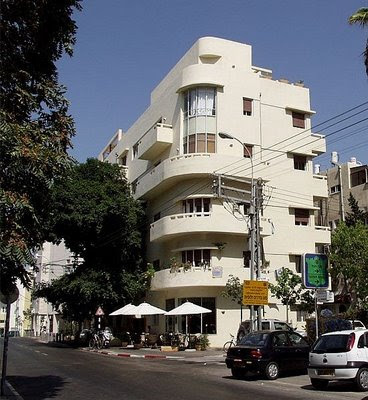 Inevitably Geddes’ plan had to be modified so it never fully mat­er­ial­­ised in its purest form. During its implementation, the density of the city had to be greatly in­creas­ed, to cater to the flood of imm­igr­ants to Tel Aviv in 1930-9. By the height of British Mand­ate, the city had grown enormously and was home to 150,00 people and 8,000 buildings. Of Geddes’ 60 public gardens, only half were ever built.

You can still access the 1931 Master Plan of Tel Aviv, drawn up by the city engineering department, according to the original Geddes master plan of 1927. The primary roads, containing the city’s com­m­ercial activity, are indeed broad and flow north-south. The second­ary roads, mainly residential and still broad, do flow east-west. Wide tree-lined streets increased the sense of shade and of pleasant public space; trees added essential colour.

German Jews who made aliya in the l930s brought with them the then-newest architectural ideas: the modernist ideas of ar­ch­itects Le Corb­usier and Walter Gropius. And at the VERY time the Tel Aviv was getting going, modernist archit­ects at the heart of the Bauhaus movement were leaving Germany: 1933! While many of the lead­ing Bau­haus ar­chitects fled to Britain and USA, at least 20 Bauhausers and their colleagues migrated to British Palestine. Timing is everything!

Tel Aviv very quickly adopted their style as a route to defining the charac­ter of a new Jewish city, burgeon­ing on the Mediterranean. No more Levantine made from stone, peaked roof, wooden balconies, Arab­ic windows, grand colonnades and lots of metal decoration. By the mid-1930s it was the only city in the world being built ent­irely in the Bauhaus Style; its simple concrete curv­es, boxy shapes, small windows set in large walls, glass-brick vert­icals, asymm­et­ric­al fac­ades, horizontal lines and balcon­ies all washed with white. I would love to have seen Tel Aviv when it app­eared as a vis­ion of startling white: c4,000 buildings, all built from 1933 on.

1. There was no need for Tel Aviv architecture to be historically consistent with pre-existing buildings as there WAS no past. They could focus on developing a new, modern direction.

2. Bauhaus architects believed it was their job to improve so­c­iety with their designs: a new form of soc­ial housing for working famil­ies, trade union cooperatives and free medical clinics. Bau­haus' socialist ideas were popular with Jewish intell-ectuals, especially its view on form and function.

3. Bauhaus designs were quicker and cheaper to build. A Bauhaus building needed prefabricated blocks of reinforced concrete, had a flat roof and sheer façade, with no cornices, eaves, addit­ions or decorative bits. There was a 3 storey limit. As colour was considered bourgeois, build­ings were white, grey or beige.

4. At least 20 young, energetic Bauhaus-influenced architects fled Germany in 1933 and were living in Tel Aviv, looking for commissions. The city council could draw on this amazing pool of available talent.

Along the Mediter­r­anean balconies were mandatory: to in­crease the movement of breezes and to enj­oy the sea view. Where possible, over-hanging brows blocked dir­ect rays of sunshine from entering the win­dows. Roun­ded balcon­ies were clearly no more functional than angled ones but they were often chosen to mitigate the harsh, linear fac­ades. This changed in the 1930s when immigrants arrived in desperate need of hous­ing. Many elegant Bauhaus lines were then obscured by balcony enclosures, giving an extra room but looking ugly.

Concrete stilts, which raised the buildings off street level, creat­ed room for a green garden area while providing greater air flow. As with the balconies, much of the once-open area created by the stilts has since been enclosed.

Flat roofs were already a feature of the Bauhaus buildings in Eur­ope, as opposed to the more typical shingled and slanted roofs. While Tel Aviv roofs in most cases did not feature roof gar­d­ens as planned by Le Corbusier, they at least served all building res­idents. 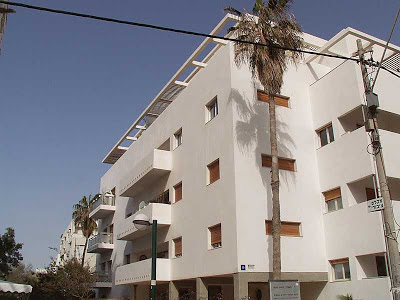 Note the flat roof  with gardens

Bauhaus interiors in Germany were already white, functional and unadorned. But Tel Aviv has a hot climate, so rooms had to be made as cool as possible. Wall to wall carpets and curtains were out; marble or tile floors were substituted; and shutters could close windows entirely. Since space was at a premium, there could be no narrow and useless hallways. And space could be used flexibly, of necessity.

I have lived in, or visited many modernised Tel Aviv flats, but I have never seen a photo of what the interiors looked like in 1933. Thus this photo is, at best, a guess. 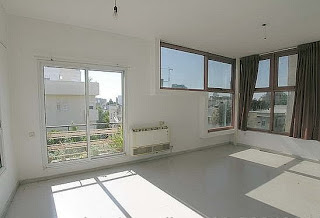 Over the decades, buildings were seen to be too degraded to restore. The original Bauhaus build­ings would have all ended up being bull­dozed unless enough people cared to save the derelict ones still standing. Three miracles happened:

A] In 1991 the Engin­eer­ing Dept of Tel Aviv municipality created a Modern Heritage Preservation under architect Nitza Szmuk.
B] Bauhaus Renovation Foundation was formed and organised a Bau­haus Conf­er­ence for May 1994. 2,000+ inter­nation­al particip­ants arrived.
C] 2003-4, UNESCO declared central Tel Aviv a protected city, on the World Heritage List.

So I am sitting here in Melbourne, thinking fondly of Geddes. With the hearty help of Dizengoff, Geddes planned a Garden City of wide tree-lined boulevards, small roads with smaller green spots, clean-lined, boxy buildings with very little ornamentation and a beach focus. Appropriately Tel Aviv now has a Bauhaus Museum to dis­play Bauhaus-designed furnishings and related objects. It opened in 2008 at 21 Bialik Street.

What do you know about Moshe Cherner? I'm trying to collect a list of his buildings (which included Tel Aviv's City Hall, the Ohel Shem bldg - the first home of the Israeli philharmonic, something to do with the original Haifa Technion building, and several residential buildings in Tel Aviv.

Avi, no wonder the Bauhaus guide showed me only buildings designed by the architects who worked in Tel Aviv from after 1933. Perhaps Moshe Cherner/Czerner arrived in Tel Aviv in the early-middle 20s and was too early for a le Corbusier influence. Like you, I know of only:

2. The building at 27 Bialik St, which was originally planned and built by Cherner as a hotel in 1925, functioned as the town hall until 1965. Now Skora’s Building is the Museum of the History of Tel Aviv-Jaffa.

And you should also try
3. Boutique hotel at 25 Nachmani St which seemed to have been designed by Moshe Cherner in 1925.

The fine blog called "Samuel Gruber's Jewish Art & Monuments" informed his readers that the Jewish Museum of Munich was putting on several exhibits called "Places of Exile" until Aug 2009.

The second of these exhibits looks at the Bauhaus architecture of Tel Aviv, celebrating its 100th anniversary in April 2009. The photos emphasise that the White City was and is the largest concentration of Bauhaus-inspired architecture anywhere.