Two of my old Melbourne friends and colleagues have published books recently, which is very exciting for me. I am gaining vicarious pride from their successes. 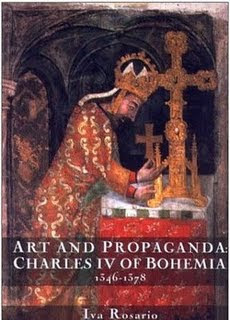 "Charles IV, Holy Roman Emperor and King of Bohemia (1316-1378), was one of the most astute and cultivated monarchs of his time, and during his reign Prague became a major cultural centre and royal power base. In an age when royal portraits were a rarity, he showed an early understanding of their ability to project the power, wealth and cultural sophistication of the court. A number of royal portraits were commissioned within the decorative schemes of the buildings, altarpieces, manuscripts and reliquaries with which he endowed Prague and the royal castles. This is the first study in English to look at the phenomenon of Charles' early use of the arts to consolidate his power. It focuses particularly on some thirty portraits of Charles IV, to demonstrate how and why the court harnessed the visual arts to legitimise, glorify and sacralise the great medieval ruler. By placing each portrait in its historical context, the author gives a fascinating insight into the art of political propaganda in an important European court of the middle ages. Dr Iva Rosario is honorary Senior Fellow of the School of Fine Arts, Classical Studies and Archaeology, University of Melbourne".

“In 2005, in the wake of the Cornelia Rau scandal, a citizen's inquiry was established to bear witness to events in Australian immigration-detention facilities. Until then, the federal government had refused to conduct a broad-ranging investigation into immigration detention in Australia, and the operations within detention centres had been largely shrouded in official secrecy. The People's Inquiry into Detention heard heartbreaking evidence about asylum-seekers journeys to Australia, their detention process, life in detention and life after detention. In total around 200 people testified to the inquiry, and a similar number of written submissions were received. 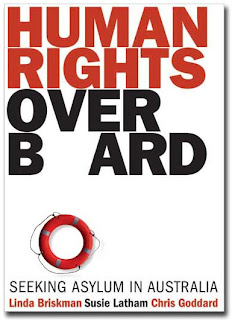 Human Rights Overboard draws together, for the first time, the oral testimony and written submissions from the inquiry in a powerful and vital book that stands as an indelible record of one of Australia’s bleakest legacies. Clearly and comprehensively presented, the book is a haunting journey guided by voices from every side of the fence: former immigration detainees, refugee advocates, lawyers, doctors, psychiatrists, and former detention and immigration staff. Together, their stories bear testimony to a humanitarian disaster that Austral­ia caused and that must be remembered so that it never happens again”
Posted by Hels at 29.11.08