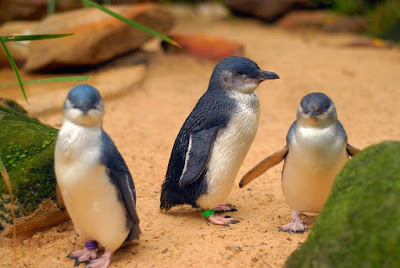 Penguin colony has expanded significantly in the time Dann has worked at Phillip Island. A property buy back in the 1980s helped consolidate the colony’s fut­ure. “I’ve met people who don’t like Christmas and cats and babies,” says Peter Dann. “But I’ve never met someone who doesn’t like peng­uins.” Dr Dann estimates he has watched the penguins come ashore at Phillip Island more than 1000 times, and has been fascinated every single time.

But after a 42-year career in penguin conservation and research, Dann believes the time has finally come to retire from full-time work. “It’s been a consuming passion of mine. My interest in it and the pleasure I get hasn’t diminished.”

He was the only research biologist working with the penguins at Phillip Island when he began in 1980, and it’s been his only full-time job. The conservation effort has since expanded, and Dann now leads a team of eight researchers at Phillip Island Nature Parks.

But all was not well at the penguin colony when he first arrived at the island. A housing estate at Summerland Beach, where the penguins nest in burrows, had grown to almost 180 houses. Numbers were falling in the penguin colony, which was regularly attacked by foxes and dogs. Penguins were often killed on the road by cars. It was the most difficult period of Dann’s career, and he was frustrat­ed that action to protect the penguins was happening so slowly. “I lost a lot of sleep over the population when it was clearly declining,” he recalled.

In the mid-1980s, the government decided to buy back the properties on the estate to protect the penguins. Dann said he lobbied the government to enact the policy, even though he was living at the Summerland Estate himself. “It was a very emotional time for a lot of people,” he said. “We had many difficult conversations, but it was a remarkably civilised process.”

Dr Dann said in 1983 there were between 8000 and 12,000 breeding penguins on Phillip Island. It now has the largest colony of little penguins in the world with 40,000 spread across the peninsula.

Dann has grown intimately acquainted with the charismatic creatures and marvels at how the flightless birds have adapted to life at sea. He can instantly recognise their short barks when emerging from the water and their louder courtship calls.

Dann has co-edited a book on penguin ecology and management and written many academic papers. Yet he insists his affection for wildlife is not limited to Phillip Island’s beloved seabirds. Dann says there would be at least 100 animals jostling for space in his top 10 list and all native species have a right to exist in their natural habitat.

A property buyback at Phillip Island from the 1980s helped consolidate the penguin colony’s future. “To me, it’s tied up in justice as well.” Now he hopes the penguins will act as a flagship species and their endearing nature will encourage people to protect the entire ecosystem.

Dann feels confident the future of penguin conservation is in safe hands at Phillip Island, and he will continue co-supervising four PhD students.

“There’s only one thing on my list that hasn’t been done: the eradication of feral cats on Phillip Island.”

“Its value as we enter a period of more rapid and potentially more devastating change is inestimable,” she said.

Environment Minister Lily D’Ambrosio also thanked Dr Dann for this contribution to biodiversity. “The dedication of ecologists like Dr Dann is vital to protecting our precious plants and animals, alongside sustained investment in biodiversity,” she said.

Dann feels he can retire free of the worry that plagued him as a young biologist when he feared for the future of Phillip Island’s penguin colony. “You can bask in the knowledge that the population is thriving,” he said.

**
The world's smallest penguins, fairy penguins, are among most amazing Australia's phenomena. For possibly thousands of years, every evening, after sunset, in any weather, 365 days a year, these little penguins walk to their burrows at the Summerland Beach. They gather in groups of 10-50 individuals in the surf at the water's edge, and then, as if at a command, start marching through the beach to the sand dunes where their homes are located. To observe the Penguin Parade, go to rove.me

Some people really do change the world for the better. Well done Dann. Fortunately you can still drive through the estate and see the views during the day, but I think the road is closed and locked at dusk until dawn to protect wandering penguins.

Research Director at Phillip Island Nature Park, Dr Peter Dann has devoted his 40-year career to studying penguins, and oversees one of the world's largest colonies of the smallest member of the family. During the March heatwave over 35 degrees in southern Australia in 2019, the Phillip Island penguins became extraordinarily heat-stressed while moulting in their burrows. And despite draping many burrows in shade cloth, and placing delirious penguins in the fridge to revive them, Dr Dann and his team found hundreds dead in the days afterwards, the greatest known loss to date. “They don’t sweat like mammals and unlike some birds they don’t pant".

most people want to be honourable, but did any of us even know that the little Mariana fruit bat went extinct in Guam or that the paddlefish has been declared extinct in China?

Which why it is so important that Dr Peter Dann and the Phillip Island Nature Parks experts have worked so hard to protect Australia's iconic treasure - the fairy penguin. Otherwise our penguin would have appeared on the Extinction List, just below the Baiji dolphin.

thank you for that information. Normally we think of penguins being killed by sharks, eagles, domestic dogs or loss of their breeding sites in new housing sites.

But you are suggesting that severe climate change caused extraordinary heat-stress while moulting in the penguins' burrows. Nothing that the carers did.. succeeded in protecting the penguins :(

I love holidaying on the island, but I hope visitors stay back from the penguin parade, preferably behind glass.

Hi Hels - what a wonderful man - so brilliant to read about him ... and how his 40 years of research will always benefit future custodians of the area. It's good to find out where the Island is ... must be beautiful - cheers Hilary

Peter Dann deserves our full admiration for his long dedication to the studying and protection of Australian penguins.

people can only watch the daily penguin parade each evening of the year, IF they have a ticket and if they sit where viewing is allowed. Tiered seating in the grandstands allow a clear and close view from _above_ the marching animals. A more expensive ticket is for the underground viewing area that allows the viewer to see the penguins face-to-face through a glass window.

I think I missed all of Dr Dann's academic journal articles and conference presentations because penguins are flightless birds and not mammals, even though they spend all their time on land and in water. I was more upset about Javan rhinoceroses being critically endangered than about any birds or fish. But that makes an academic's lifelong dedication even MORE impressive.

I agree. Academics don't receive substantial salaries, so they keep up their important work because of their professional values. A paper you might like to read, CLIMATE CHANGE AND LITTLE PENGUINS, should have been a real eye opener back in 2009.

I agree. Probably every nation on the planet has to allocate serious resources towards protecting their national treasures. It is too late to save those animals that already disappeared, but there are many species still facing extinction in the next few years. Britannica, for example, highlights the giant panda in China, Asian elephant in India, snow leopard in Mongolia and the mountain gorilla in Rwanda.

yes! I wish we were all that dedicated.

All my kids have been down to see them come ashore . It really is a magical thing to watch . Such tiny little brave creatures coming out of the wild southern ocean . Its very moving . Apparently they have to go further out to sea to feed and so use up more energy coming and going and this isn't great for them or their chicks. Bloody climate change and bloody bloody humans !!!

although conservation of species in their natural habitat is scientists' ultimate goal, the species are most vulnerable in the wild for the very reasons you specified. Even more so with cute little creatures like penguins - people just want to pet them. The scientists at Phillip Island Nature Parks may not be able to control climate control, but they have certainly done a great job keeping the foxes, domestic dogs, feral cats and human beings well away.

See "Meet the Penguins". From the world's most famous penguin parade on Phillip Island to the penguins living in St Kilda, meet key characters who will attempt to complete their mission: to stake their territory, partner up and raise their chicks. It premiered Tuesday 28 June at 8.30pm on ABC iview and ABC TV.

I always enjoy the accounts of those who study animals so closely, sharing even the minutest of details.

Thank goodness. I think most people would agree with you about mammals, preferably large and definitely attractive. And people will weep when the snow leopard totally disappears. But few care about the Oregon giant earthworm, for example.

The Little Penguins of Philip Island were one of the highlights of our trip to Australia. They were fiercely protected as we watched them from a raised walkway and we were instructed to keep very quite and NOT to take photographs.

the fairy penguins are indeed so important, they need every single penny spent on preventing extinction. Especially since, even when they lived in relatively large numbers, they only existed in New Zealand and a small portion of Australia.

My family has a beach house on Phillip Island, so we are particularly grateful to the Phillip Island Nature Parks people. But we have to be realistic - the penguins spend the long day out in the ocean and only a short time in their burrows in the dunes. They are very vulnerable for most of the day.

Our Aussie friends moved from Warrandyte to Cowes and another from St Andrews to a smaller estate; just six acres!

when is your next trip to Australia? :)