The miltary and ideological issues raised in this post will remind us of Charles Bedaux and Philippe Petain. But Pierre Laval was his own man. Born in Auvergnac France, Laval (1883-1945) graduated in Law and Science, then went into business. He was elected to the French Parliam­ent as a Socialist in 1903. Although originally a pacifist Senator, La­v­al did join the French Army when WW1 broke out.  He was a totally honourable Frenchman. 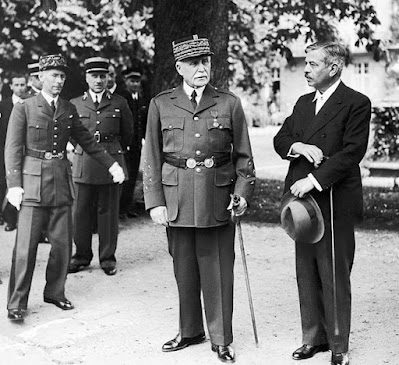 Marshal Petain and Pierre Laval,
Sevigne Pavillion Park, Vichy c1942
The war greatly chang­ed Laval's pol­it­ical beliefs; after the war he was re-elected to the French Cham­b­er of Deputies but now as a rigid conserv­ative. Over the years, he was app­ointed French For­eign Minist­er, and was Prime Minister twice, from 1931-2 and 1935-6. In off­ice he worked clos­e­ly with Aristide Briand (French Prime Minister till 1929) to est­ablish good relations with Germany and the Soviet Union. Yet he delayed the 1935 Soviet-Franco Pact, in order to align France with Fascist Italy!

In Oct 1935 Prime Minister Laval and Bri­tish Foreign Secretary Samuel Hoare negotiated a pact to end the Italian Invas­ion of Ethiop­ia Crisis. The secret Hoare-Laval Pact proposed that Italy would receive two-thirds of the territory it conquered, plus per­mission to en­large existing East African colonies. In re­turn Ethiopia would receive a nar­row strip of territory and access to the sea. The Hoare-Laval Pact was leaked to the press in Dec 1935, and was widely denounced as appease­ment of Italian agg­res­s­ion. Laval and Hoare were both forced to resign by the public out­rage!

When the German army attacked France in May 1940, Laval used the influence of his media empire to support the senile-ish, 84 year old hero Philippe Pétain (1856–1951) as head of the French collab­or­at­ion­ist Gov­ernment. It was bas­ed in Vichy, tasked by Germany with ruling that part of France not occupied by the Ger­man army, although under Ger­­man super­vision. Hostile to the original decl­aration of war against Germ­any, Laval naturally en­couraged the anti-war fact­ion in the French govern­ment. Laval also used his money in the National Assembly to give dictatorial powers to Petain. In July 1940, Laval was named as Prime Minister and Pet­ain's legal successor. 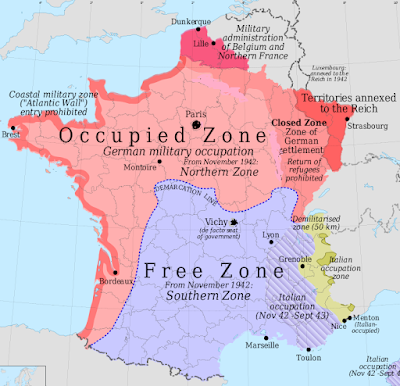 When Pétain took over the new Vichy state, Laval used his political influence to propose an armistice with Germany. Laval developed a close relationship with Otto Abetz, the German ambas­s­ador in France, and in Oct 1940, he met Adolf Hitler and proposed that the 2 countries should work closely tog­ether. At a meeting with Nazi Air Force command­er Her­m­ann Goering later that month, Laval proposed a specific military all­iance with Nazi Germ­any. French Parliamentarians worried about these devel­op­ments and event­ually Laval's actions became too much for even Vichy collabor­at­ionists.
In Dec 1940 Pétain was persuaded to have Laval fired and arrested. Abetz sent in troops to release him and he was taken to Paris, to live under the prot­ec­tion of the German Army. But in Aug 1941, a French student fired off shots into Laval while seeing off French vol­un­teer troops taking part in Op­eration Barbarossa. Al­th­ough gravely wounded, he did re­cov­er and under heavy pressure from the Germans, Pet­ain re-installed Laval as head of France's Vichy government.

Back in power and firmly under German occupational protection, Laval began a project to cleanse France of Jews. He ordered French pol­ice to round up all foreign Jews they could find and hand them over to the German authorities. He also created a hated French programme in 1942 that sent skilled French labourers to Ger­many in ex­change for Ger­man repatriation of French POWs captured in the 1940 invasion.
In Jan 1943 Laval creat­ed the horrendous Milice, a polit­ic­al police agency led by French WW1 hero, Joseph Darnard. It hunted and capt­ured left­ist act­iv­ists, and Jews with­out French citizenship, deport­ing them to Nazi Germ­any. Milice grew to 35,000 men and was so brutal that it alienated even many Vichy fans. He granted the secret Nazi Gestapo the auth­or­ity to hunt down French resistance fight­ers in occup­ied France AND ord­ered his own Vichy police to help them. By then Laval had won Hitler’s trust, and the elderly Pétain became merely a figurehead in the Vichy regime. As leader of Vichy France, Laval collaborated with Nazi oppress­ion and genocide, and became a puppet of Hitler. 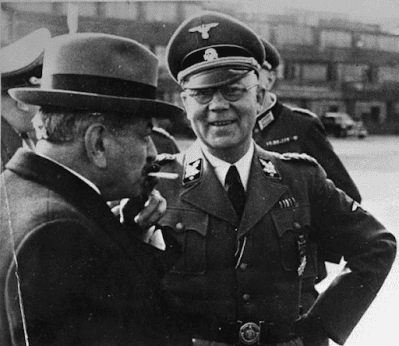 Pierre Laval and Carl Oberg, head of German police in France
May 1943 in Paris.
The Vichy government's fortunes greatly changed with the invasion by Allied armies. After the D-Day Landings in June 1944, Paris was liberated; Petain and his Ministers fled to Southern Germany and served as an exiled government at Sigmaringen. Joseph Darnand, who went with Petain, was eventually captured by the Allies. Laval moved to N.E France but with the Allies prog­ressing, Laval retreated and in May 1945 fled to Barcelona. Spain’s General Franco said Laval had an option to sail by ship to South Amer­ica, but he decided against it, freely ret­urn­ing to France in July 1945.
With Germany’s defeat in May 1945, Laval was handed to the new French gov­ern­ment led by Gen Charles De Gaulle. Laval was charged with tr­ea­son, found guilty by the High Court of Justice and shot by firing squad at Fresnes Prison Paris in Oct 1945. As was Joseph Darnand. 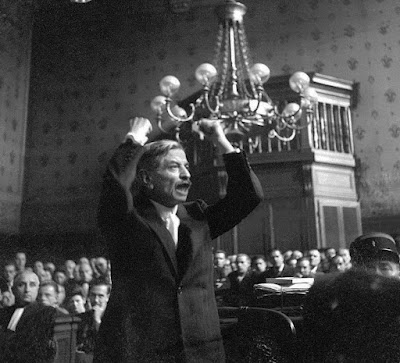 Laval defended his French patriotism at his own trial,
Paris late 1945
Pétain was tried in Aug 1945, convicted for trea­son and also sent­enced to dea­th, but it was commuted to life in prison. Read Trial of Pierre Laval: Defining Treason, Collaboration and Patriotism in WW2 France, by J.K Brody, 2017.
Posted by Hels at 21.5.22

Execution is execution whether it was ordered by Laval's own courts or the enemies. They should have put him in a repair gang, rebuilding the homes of those families he destroyed.

Who was worse - Laval or Petain?

I find shooting their ex-prime minister by firing squad to be terrible, however right wing his politics later became. On the assumption that Germany would win the war, Laval's goal was to assure Germany of France’s goodwill, thus protecting France with his negotiations with "the enemy". Needless to say Laval's negotiations were in fact diabolical to French leftists, Jews and French resistance fight­ers.

I am biased so I will quote the BBC

For the whole war Laval tried to help Germany; he thought this was for the best because the French situation would be even worse otherwise. Thus many consider that the Vichy regime betrayed France by accepting a peace which robbed France of its freedom as a state. Laval was one of the main contributors to this disgraceful peace.

On the other hand, when the first roundups of Jews took place in Paris in August 1942, Marshal Petain offered the services of his police force and the National Guard to help carry out this obscenity. All up, the Vichy regime deported 75,721 Jewish refugees and French citizens to death camps. Our two uncles in France though Petain was the worse.

me too. I knew far more history between 1625 and 1925 than earlier or later, but once every so often I get attracted to new topics via guest blog-posts, new books, new history documentaries on tv etc.

Mind you, on subjects I am not 100% confident about, I have two problems: 1] how can I answer readers' questions and comments? and 2] how can I draw as many readers to these posts as I normally attract?

When Laval knew he was going to be shot by firing squad, was he contrite for his treasonous behaviours? Or was he furious that his sacrifices for his beloved France were being ignored by the executioners?

Laval was arrested for treason by Charles de Gaulle’s French government. At trial he found himself in a hostile court and a heckling jury, such that his lawyers finally left the court. Laval was found guilty of collaboration with the enemy, so he accused the court of being motivated by political considerations, not by judicial preoccupations. And he accused the French soldiers in the firing squad of becoming accomplices in a judicial crime.

many thanks. I find some topics easy to write and easy to reach halfway decent conclusions. And I can understand why Prime Minister Laval and Bri­tish Foreign Secretary Samuel Hoare would want to end Italy's Invas­ion of Ethiop­ia in Oct 1935. But the political and military decisions were often hidden. And the alliances were equally unreliable.

Thanks for this . Its very interesting . I had heard of Laval but not the details . I do know that Otto Abetz is ours senator Abetz uncle . He defended him once by saying that he loved Paris so much that he stopped Hitler from bombing it . I was just a little nonplused by that statement !!

Otto Abetz became Adolf Hitler’s wartime ambassador to France in 1940. He was captured by Allied forces in 1945 and was sentenced to gaol for crimes against humanity, but spent few years there. Of course I know that his Australian nephews in Australia never met their uncle and had no reason to be ashamed of their family... until they found out his role in WW2. Yet Uncle Otto, apparently, "did very positive things". The Abetz brothers here, both MPs, claimed Otto left a positive legacy in protecting the collection of public and private art that he'd seized at the order of the foreign minister Joachim von Ribbentrop.

I also don't blame the Australian brothers for not knowing about their grandfather, Professor Karl Abetz who joined the Nazi Party in 1933 and became head of the Reich Forestry Office in 1942. However I DO blame Eric for his own nasty, extreme right wing policies as a Minister in Tony Abbott's government.

Hi Hels - my knowledge of WW2 is extremely limited ... I am just grateful I was born after it. Thanks for at least letting us think about it - I've a few books here I need to read. I know many have a lot of connections with the countries involved with WW2. So much has happened in history ... so many horrors ... Hilary

I too am very grateful that my father returned from WW2 in decent condition such that I could be born in the Baby Boomer era (1946-50). But you are right... we each have a lot of information about particular parts of WW2 history eg I know far more about Britain, Russia, Ukraine, Poland, Czechoslovakia and Germany that I do about France, Italy, Switzerland etc.

The ONLY good thing about long Covid lockdowns was that many of us could catch up in our reading.

mmmm I am a bit less charitable than you Hels . I sometimes ponder who in the public sphere might have been a Nazi if they had been born at that time. I think its very important that "good people" are sometimes good only because they have been fortunate enough to not come up against real evil where they have had to make a real choice about who they are . That goes across all people and all time in my opinion. I always hope I would have been courageous enough to stand up for what is right but I am not at all sure I would have .

I am not forgiving at all. But I do think capital punishment is always immoral because it makes the hangman/firing squad/electric chair operator as much of a killer as the murderer they are killing. I would have put Petain, Laval, Abetz and every other crim causing mass murder in an isolated gaol cell for the rest of their lives.

But your issue is a different and more important one i.e could even good people slip into evil, if they found themselves under evil orders? I think not, but I recognise the brave people who fled or hid paid a terrible price in their own families.