When the Irish Experiment was conceived at the Melbourne Football Club in the early 1980s, Gaelic Football was seen as more like Australian Rules than soccer, rugby or gridiron. The experiment was very positive, especially for Jim Stynes (1966-2012) who was born into a large Dublin family. Jim attended Ballyroan Boys School and as an 8-year-old start­ed competition football. He and his two brothers attended De La Salle in Church­town, a school that favoured rugby over Gaelic foot­­ball. So Jim played rugby for his school and Gaelic football for his local club. 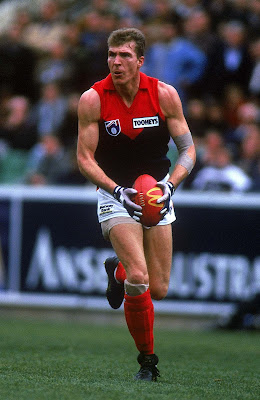 Jim Stynes
champion ruckman in Melbourne colours, 1997
ABC News
Jim was inspired by a 1980 AFL* film, The Club. A few years later, Stynes responded to a local ad for the Melbourne Football Club that off­er­ed full scholarships to play football and study here. Stynes had to im­p­r­ess Mel­b­ourne coaches at an Irish training camp seek­ing Gae­lic foot­ballers, taller than 183cm, with the skills to be­come elite Aus­t­r­alian footballers. Stynes was an Irish Experiment success!!

Did the family approve of young Jim’s decision? He moved to Aus­t­ralia in Nov and his debut was in Melbourne’s Under 19s team, strug­gling a bit. He might have been a lonely teen having some trouble adapting, but he persevered! Debuting in the AFL* in 1987, he played a record of 244 con­secutive games between 1987-98. Young Stynes apparently changed the way that the rucking role was played, and within a couple of years, his ab­ility to run and easily win possessions was noted. One year he am­as­s­ed an average of 26 possessions per match, great for a big player!!

In 1990 Stynes was named Melbourne’s vice-captain. He also played for Ireland against Australia in the International Rules series. Even bet­­ter he won the Brownlow Medal in 1991, for being the fairest and best AFL footballer of the year across Aust­ral­ia.

How did an injured footballer not miss ANY games? In 1993 Jim should have missed 6 weeks with a com­p­ound rib fracture, yet he played on! But to keep on playing, Stynes endured a rigorous fitness test where tough Demon train­ers ran into him during a 20-minute training session; the epitome of mental toughness as well. The next year he sus­t­ained a medial ligament tear, but again played on. 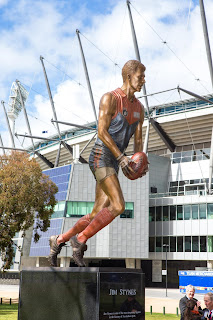 Jim Stynes statue
in the Avenue of Legends, outside the MCG
2014. ABC
In fact he was Melbourne’s best pl­ayer 3 years in a row: 1995-7 so he rec­eived 3 Best and Fairest Awards. Stynes re­p­re­s­ented Victoria for the first time in State of Origin football; altogether he played in 10 State teams for Victoria. Stynes ended his career with 264 matches, second only to God/Robert Flower as Mel­b­ourne’s recordholder.
When Stynes announced his retirement in 1998, Melbourne fans every­where were grief stricken, including myself. And he also ended his play­ing career with the Australian National team, with whom he’d played 8 Int­er­nat­ional Rules matches. In 1999 he became assistant coach for the Australian Inter­national Rules team.

Stynes became Melbourne Club President in 2008, heading up a new-look board when the club was in debt. He rebuilt an experienced team, and oversaw major debt reduction.

Note Jim Stynes’ place in the Australian sports pantheon of champions, added to the Avenue of Legends outside the MCG**, largest sports stad­ium in the southern hemisphere. He stands with 14 other Australian stars, including tennis and cricket players, scul­p­ted in bronze by Lis Johnson.

Community Work
Jim was committed to phil­an­thropy, using his high profile to co-found The Reach Found­at­ion with film director Paul Currie in 1994. Their initiat­ive encouraged the hidden-abilities in youngsters to exper­ience a better life; that ev­ery young person should have whatever support was needed. Reach impacted positively on 500,000 young Australians via schools, workshops and weekends away, and worked with teachers and youth workers.

His 1995 autobiography, Whatever It Takes, reflected the importance of this community work. Furthermore Stynes co-wrote the children’s self-help book Heroes (2003) and became a member of the Fed­eral Minister for Youths Comm­it­tee. Then Stynes co-wrote anot­h­er children’s self-help book, Finding Heroes (2005) and became a member of the Federal Minister for Educations Advisory Group. He won an Order of Aust­ralia in 2007.
Happily Jim married Samantha in 2000, and had two children: Tiernan and Matisse. And he realised his own teenage dream of a university educ­at­ion: Bachelor of Social Science (RMIT Uni); Bachelor of Education (Dea­kin Uni); and honorary Doctorate (Aust­ralian Catholic Uni).

In July 2009, Jim Stynes was diagnosed with cancer and given months to live. He was 42, had been healthy, fit and intolerant of ill­ness. In July, he held a media conference to ann­ounce that he had back cancer.. which had spread to his brain. And he be­came the first pers­on in Aust­ral­ia to trial Ipilmumab, a new immune-stimulation treatment. Then he had surgery to remove his brain tumours. 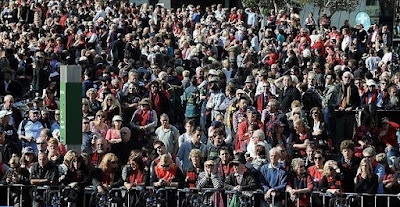 Thousands of fans at Jim Stynes' funeral
2012. Herald Sun.
Stynes’ final legacy was his book My Journey (2012). Tough in de­tail, Jim wrote a mov­ing, insp­iring story of a life lived fearlessly. And he participated in the tv docum­entary about his life: Every Heart Beats True.

He passed away in 2012 at his Melbourne home, at 45, and last res­p­ects were paid at a state funeral. Thank you Ireland for our Australian hero. 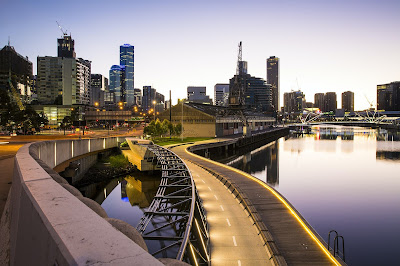 I wish Jim Stynes had lived long enough to see Melbourne win the premiership in 2021. He deserved the cup to be named in his honour.

I always love your left of field posts. There was certainly some detail about Stynes I did not know. He certainly performed some great works.
Unfortunately I could never take to him. I don't know why, but there you go.

Not being a follower of Australian football I have never heard of Jim Stynes but what a life he has led. Although tragically cut short he achieved so much, not just on the field but as an inspiration to so many youngsters. What an incredible person he must have been.

Melbourne's last premiership was in 1964!! The half century after 1964 was so depressing for Melbourne players and fans.... until Jim Stynes made a huge difference on and off the field. That he died in 2012, almost a decade before the 2021 premiership, seems incredibly unfair :(

I almost didn't publish this post because of the thousands of people who might read this blog, perhaps 27 will remember Jim Stynes. However people assume that sports stars are fast and muscle bound, but not very bright. Especially foreigners. So here we are :)

Jim Stynes was a truly great footballer, but I think I was even more impressed by his desire to earn a tertiary education, establish a major youth service across Victoria and New South Wales, have a very happy and financially secure Australian family, and write important books.

If there is a God in heaven, I don't understand why such a wonderful man would die so early. He left his wife and children heart broken, his football fans devastated and his 500,000 young Australian followers missing their mentor.

Perhaps there will be another incredible community leader in the future.

Hello Hels, I am glad you posted this story, of an man who was an exceptional athlete and then used his energy and influence to do good in the world. He is an inspiration, and how tragic that his life was cut short.
--Jim

Never heard about him. He died quite to early.

I read the news these days in newspapers and not on tv because every story is filled with oppression and death in Myanmar, Afghanistan, Sudan, Syria, Iraq, Somalia, guns in the USA, refugees drowning in Italy, covid rampant in Brasil etc. Would it not be possible to have one life affirming, inspirational story per night?

that is quite true. We tend to know about great sportsmen, only if they are stars in an international sport. For example you will know the names of Australian tennis players, if they win Wimbledon, but you probably won't know Peru's best jockey or Canada's best hockey player.

Jim Stynes died way too early. What a terrible waste of a fine human life.

Your post brings us a very moving story!
It's about an Irish-Australian great man and football player who died untimely, leaving his family, football fans,and young followers - devastated.

What happened to Jim's beloved parents and siblings?

A teenage boy, leaving everyone he knew and loved, was a brave lad indeed. However the AFL looked after Jim Stynes superbly and he was ambitious enough to know that he could never have done so well educationally and career-wise back at home. So he was a New Australian who gave everything back to his new country, community and club.

Brian told his big brother, Jim, he would follow him to Australia. There was no greater testament to a family's love than the fact that all the siblings (Brian, David, Terri-Ann, Dearbhla and Sharon) all did just that, and now call Australia home. Jim's parents, Tess and Brian snr, are Australian citizens and split their time between Melbourne and Dublin.

Understood ... Australia is connected to the rest of the sporting world via soccer, cricket and tennis etc, not via Australian Rules Football. But the issues raised in Jim Stynes' story are relevant in lots of countries - recruitment of teens from struggling countries to richer countries; provision of education/housing/training; sporting fame across the new country; community involvement at the highest level; national awards.

Everyone know Wayne Gretzky (but in Peru horse race are not very popular) :)
But Austalian football is just regional game - I know it a bit, cause I have family Down Under.

hey... we may be cousins :) I had no idea you had connections here.

I never invite people to travel to Australia in winter because swimming on the beaches in summer is much more attractive. But football runs for 24 weeks in the normal season, which is in winter i.e April-September.

I was in Australia in "normal" winter - at February :)
But with swimming was little problem, cause first was gellyfishes, second - cyclone. And we haven't time for lying on the beaches - we wanted to see as much as possible

A friend of mine from Boston was eventually getting to Melbourne but stopped en route in Far North Queensland to see the coral reefs. On the first day there she was stung by a jelly fish and ended up in hospital :(