Franz Marc's precious Foxes painting (1913). Taken by the Nazis, will it be returned? 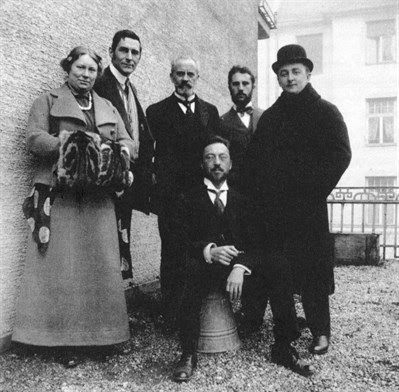 L-R: Maria & Franz Marc, Bernhard Koehler, Heinrich Campendonk, Thomas von Hartmann,
Vasily Kandinsky (seated),  Munich, 1911
Franz Marc (1880–1916) and Wassily Kandinsky (1866-1944) were the main figures in the new Expressionist art group called Der Blaue Reiter (1911-4). Strong forms and colours were the external expressions of their creat­ive spirit, and they were the influence on younger men joining this Munich-centred organisation.
Andre Derain exhibited works at Kan­dinsky’s New Art­ists Association in Munich.  He took part in the Secession­ist Der Blaue Reit­er group show in 1912 and then the Arm­ory Show in New York in 1913. Franz Marc, August Macke and Lyonel Fein­inger were thrilled. Their id­eas strongly influenced both the Cubists and the German Exp­res­sionists eg Alexej von Jaw­lensky, Paul Klee, Albert Bloch and Gab­riele Münter.
Kandinsky and Marc also influenced their Expressionist supporters’ creativity via the books they edited together: On the Spir­itual In Art 1910 and The Blue Rider Al­man­ac 1912. Marc's artistic philosophy showed that his col­ours spoke an emot­ional language, as though each colour could hit a specific note, seeking a spiritual truth.

Marc’s oeuvre was dominated by portraits of various animals, ea­ch one evoking a unique mood, and often fragmented. For Franz Marc, painting animals like Die Füchse/The Foxes (1913) represented a more innocent time. In this cub­ist paint­ing, viewers sil­ently watched the animals through a shatt­ered window. It broke down natural forms into abstract forms in bold colours.

In his many works of horses, dogs and foxes, he wanted to convey a message about the natural world & its relation to humanity. And another thing. For Marc, animals brought relief from the pain and tension of modern life. How ir­on­ic that Marc paint­ed his beloved animals until the painful end of his short life.

Why were artists, usually anti-violence, so anxious to get into WW1? And why against their beloved French artist-brothers? German artist-soldiers felt “War simply had to bring up grandeur, strength, dignity. To us it seemed a masculine act, a merry shootout on blossoming, blood-bedewed mead­ows” Ernst Junger. Franz Marc expected the war to bring a world­wide catharsis and a spiritual purging of humankind. Karl Schmidt-Rottluff looked forward to the chance to create something as power­ful as could be. 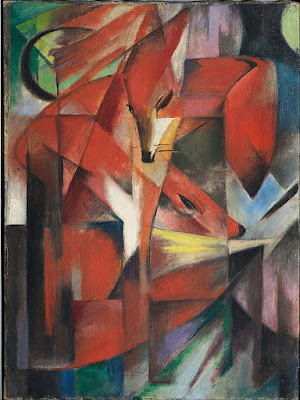 Marc, Die Füchse, 1913
Museum Kunstpalast, Düsseldorf
Otto Dix was the artist who best depicted the emotional drama and psy­ch­ological intensity of war. George Grosz volunt­eer­ed for military service in 1914, in the hope that as a volunteer and not a conscript, he would not be sent to the front. Max Beckmann, Ernst Ludwig Kirch­ner, Lovis Cor­inth, Franz Marc and Conrad Felix­mül­ler became soldier-artists. These German ex­press­ionist artists, plus Emil Nol­de, Käthe Kollwitz, Egon Schiele, Erich Heckel and Max Ernst, were indeed branded as a threat to the German nation. Sadly the group came to an abrupt end when soldiers Marc and Macke were killed in WW1.

The Foxes was bought by Jewish business­man-banker Kurt Grawi in 1928. His properties were seized by the Nazi Party in 1935 and most of his art collect­ion was seized and sold in the Jew Auction at Berlin’s Leo Spik auction house in 1937. Arrested on Kristallnacht-pogrom night, Grawi was locked up in Sachsen­hausen Camp in 1938. After his release, he wrote in a letter saying he would use the funds from the art sale to flee Germany. Grawi was able to smuggle the Foxes painting out of Ger­m­any to Paris, then he fled to Chile in 1939. His wife and sons followed him to Chile later that year.

The Foxes somehow left Paris and was displayed at US art gal­l­ery Karl Nierendorf in 1939. Extensive prov­enance research by Düs­s­el­dorf couldn’t find when and where the paint­ing was sold, and by whom. But somehow Die Füchse was smuggled out of Germany and sold at auc­t­ion in New York in 1940, for an unknown price, to German-American film dir­ector William Dieterle. Owner of a German depart­ment store chain, Helmut Horten, bought it in 1961 and later donated it to the Kun­s­tpalast Museum Düsseldorf. 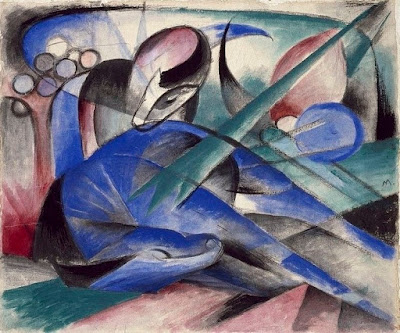 Marc, Dreaming Horse 1913,
Solomon R. Guggenheim Museum NY
In Apr 2021, the Cultural Commission unanimously voted to return the Marc painting (value $18–$36 mill). The Kun­s­tpalast Museum Düsseldorf, which held The Foxes sin­ce 1962, quickly agreed to re­st­it­ute the painting to Grawi’s heirs. But the 6-years-long case hadn't clos­ed. The deb­ate was close­ly foll­ow­ed by ex­perts because of the work’s proven­ance. Where­as most works sub­ject to restitution claims post-WW2 were “sold under dur­ess” in Nazi Europe, this one was purchased at auc­t­ion in New York in 1940. This deb­ate could potentially redefine what it means for a work to have been sold under duress.

German art magazine Mono­pol’s experts advised the restit­ution of the work because they believed it had been sold under duress, even though its auction occurred outside the Nazi sphere of influence. The sale was so closely conn­ect­ed with Nazi persecution that the sale site be­came secondary. The heirs also believed that the exact sale site had no bear­ing on whether it should be returned. Grawi’s daughter-in-law Ing­e­burg Breit showed her in-laws had to sell every­thing of value in Nazi Germany to pay for the confiscat­ory charges on Jews and for the family to flee to Chile.
Answer: yes, the painting that has been the subject of a years-long restitution case will be returned by the City of Düsseldorf to the real owner's (Kurt Grawi) heirs. The City upheld the Cultural Commission's decision in April 2021.
The Franz Marc Museum in Munich opened in 1986 and is well worth visiting.
Posted by Hels at 23.10.21

What a massacre the war was. How could the Austrian army put its most talented and most famous young men in the trenches? They could have worked in ambulance driving, teaching or camouflage design instead.

I love the work. It is complicated when something is bought in good faith. I hope the heirs put the painting on public display.

agreed... it was a tragic waste of human life for every country who participated. But Marc enlisted as soon as the war started in 1914 and didn't wait to be conscripted.

Yes, later on Germany did try protect the future of its national culture, and famous writers, composers, playwrights etc were taken out of the trenches. But it was too late for Franz Marc. Before the order reached Marc, he had already died in Verdun, France in early 1916.

the painting was indeed bought in good faith, and if I had bought it, I also would not be happy to let it go. But it has been especially difficult since there were apparently no written records. How did Marc's work suddenly appear at the New York art gal­l­ery Karl Nierendorf in 1939?

The Grawi heirs should give a permanent display of the Foxes painting to an important public gallery, while retaining ownership themselves.

Interesting info on the German expressionist group of artists!
The case of the Foxes painting raises the important topic of paintings and other works of art that fell into Nazi possession, and the struggle of the jewish owners and or heirs to regain them.

Hello Hels, This painting is a good example of the complexities of ownership and responsibilities. It was perhaps not directly confiscated, but essentially it was. The book you recommended, The Hare with Amber Eyes, showed how many insidious ways they had of directly or indirectly confiscating property, and always in the worst faith.
--Jim

over the last few years I have been watching treasures being returned, or not, to the legal owners from the late 1930s or during the war. There were so many posts that I had to add another label to the blog: "stolen lost or faked art"

The next loosely associated post will be about the medieval Luzzatto Machzor, a topic I found fascinating.

I would love to receive references to the stolen Brasilian art works you know about. Most of the works I know about are European.

when I was a snotty undergrad, I would have said that any art created after Rafael's death was not worth chasing up in court. Then I discovered 17th century Dutch art and fell totally in love. Later the Impressionists etc etc. So it took me a while to realise that Expressionist, Cubist, Surrealist and other modern art movements were as critical to the early 20th century as the contemporary galleries and families believed they were.

It is ironic that the treasures that were stolen by the Nazis had largely been defined by those same Nazis as degenerate.

I think that the German expressionists were somewhat ignored simply because they were, mostly, German. Now with hindsight, it can be seen that they showed great talent. The view of the 'noble' qualities of war were, like the Italian Futurists, also evident in British thinking prior to the actual war. Incidentally, I was surprised to see that Andre Derain had a connection with the Blaue Reit­er group! His work seems incongruous with that!
CLICK HERE for Bazza’s fondly fulsome Blog ‘To Discover Ice’

I think the art groups oozed around in the pre-WW1 era, both membership-wise and stylistically. The movement from figurative, naturalistic painting into the new world of abstraction may have made perfect sense to Vasily Kandinsky and Franz Marc, but perhaps was more of a stretch for Fauvist artist Andre Derain. In any case, there was no expectation that all the Blaue Reiter artists would all fit into one model.

By the way if German expressionists tended to be ignored because they were mostly German, they were doomed. The Nazis promoted art forms that were traditional and moral, not the modern and degenerate styles of art that were later destroyed or banned.