Eric Liddell (1902–45) was born in Tientsin/Tianjin in China, son of Rev & Mrs James Liddell, Scottish missionar­ies with the Lon­d­on Mis­sion Society. Eric and brother Rob were left at Eltham Col­l­ege in SE London, a Christian boarding school for missionar­ies’ sons; meantime his parents and sister Jenny returned to China. During those years, their parents, sister and new brother Ernest came home on leave 2-3 times and were able to be together as a family, mostly in Edinburgh. 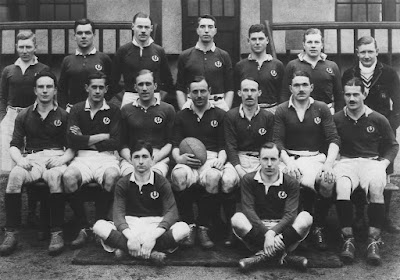 In 1921, Eric joined his brother at Edinburgh Uni, to stud­y Pure Science. He’d always been a good sportsman, ex­cel­l­ing in rug­by union and cricket; now he was playing international rugby union for Scot­land. But it was ath­letics that played a major role in his Univers­ity life, training for the Olympics Games. He ran in the 100 ms and the 220 ms for Edinburgh University, and later for Scot­land. What a sportsman!

When he set a new Br­itish record in the 100m sprint in 1923, Eric was con­sidered a great prospect for the Paris Olympics in 1924. The team travelled to Paris days before the Olympics started, enjoying a big send-off at Victoria Station.

Remember that Liddle had given up international rugby to concentrate on his Olym­pic am­bitions. But Liddell was also a committed Protestant Ch­ris­t­ian. And bec­ause the Paris Ol­y­mpics heats of the 100m sprint, his str­ongest event, were held on Sund­ay (Christian Sabbath), he had to with­­drew from the race. Lidd­ell also excluded himself from two other relays in which Britain hoped to win gold: 4 x 100m and 4 x 400m, whose finals were also on a Sun­day. I would have been heart broken, had I been the favourite for the gold. 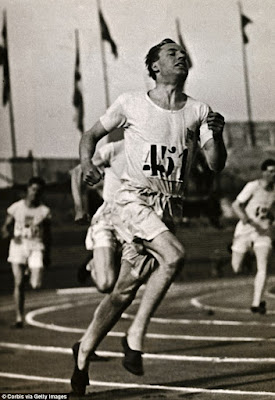 Gold medal run,
Paris Olympics 1924
Instead he concent­rat­ed on the 400m as that race schedule didn’t involve a Sabbath. The mounting excitement as the runners got on their blocks could be felt. Liddell quickly got ahead of the runners and maintained his lead through­­out, winning by 3 ms from the American Fit­ch, getting the gold medal and set­ting a new Olympic record of 47.6 seconds. He desc­rib­ed his race plan as dep­ending on God!

Amazingly he also won a bronze medal for the 200 metres in Paris.

Harold Abrahams was a British team-mate and rival. He must have relaxed a bit when he heard that Eric had decided not to run in the 100 ms – in fact Abrahams won the 100 metres in a new Games record time! Nonetheless the 400m in some way provided the UK’s greatest thrill, given the world record was broken by Eric Lid­d­ell 3 times in 2 days. It was always thought that Liddell might win, but nobody thought Lid­dell capable of the amazing performance he ach­iev­ed in the final. Highlander music celebrated loudly. 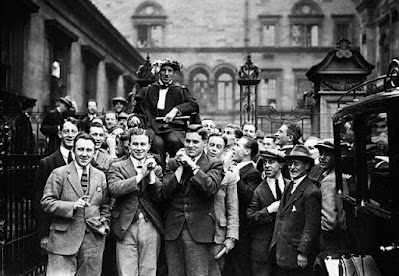 400 ms celebration in Paris streets
July 1924
After the Olympic excitement and his science degree, he moved to Tientsin to work as a Christian missionary from 1925, just like his parents. There he remained fit, but unfortunately only played sport occasion­ally.
Let's mention the North Morningside United Presbyterians who built/used the church in Edinburgh. They then built a new, larger, church across the road, for the Congreg­ational Church, until 1928 when this church was demolished and a new one erected. On furl­ough from China, Liddell returned to Edinburgh, studied at Congreg­at­ional College and was liv­ing in a George Square hostel which bel­onged to the Edinburgh Medical Missionary Soc­iety. He attend­ed Morn­ingside Congreg­ational Ch­urch, and also preached at the ch­ur­ch a few times.

After graduating with a divinity degree, Lidd­ell was ordain­ed as a min­ister in June 1932 and married Canadian miss­ion­ary Florence Macken­zie in 1934. Liddell's first job as a missionary was as a teacher at an Anglo-Chinese College for wealthy Chinese students, while the couple had 3 daughters.

In 1937 Eric was sent to Xiaoch­ang, crossing the Japanese army lines, where he joined his brother Rob. By 1941 life in China was becoming so dangerous that the British Gov­ern­ment advised British nationals to leave, so Flor­ence and the children left for Canada. The advan­c­ing Jap­anese army pressed Eric Liddell to move to a rural mission station, dealing with the stream of locals who came to the station for medicine and food. During 1941–3 Eric stayed in Tientsin. 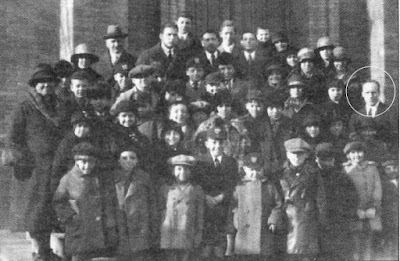 The Union Church Bible Class
in Tientsin China, 1925
In 1943, the Japanese reached the mission station and Liddell was in­terned in Weishien camp. Aggravated by shortages of food and medical treatment, Liddell developed a brain tumour. Camp internees saw him as a great unifying force and helped ease tensions through his self­less­ness and impart­ial­ity. Prisoners also said that Liddell had turned down the chan­ce to leave the camp as part of a prisoner exchange prog­ramme, giving his place to a pregnant woman. 5 months before liber­at­ion in Feb 1945, Liddell tragically died.

Three modern mentions of Eric Liddell. 1] The much loved British film Chariots of Fire (1981) chronicled the athletic lives of Lid­d­ell and Abrahams. 2] As the modernisat­ion of Edinburgh’s Morn­ingside Congreg­ational Ch­urch dev­elop­ed in the 1980s, the centre was renamed The Eric Liddell Centre in Eric’s honour. And 3] in 2002, a poll voted Liddell as the most popular Scottish sports figure of all time. Thanks to Eric Liddell Centre for images
Read Sally Mag­nus­son­'s The Flying Scotsman: The Eric Liddell Story, 2007.
Posted by Hels at 28.9.21

I think never seeing his wife and three children again was Liddell's biggest sacrifice. What a sad end to an amazing life.

Deb didn't know this. But one of Liddell’s daughters, Patricia Russell, travelled from Canada for a presentation at the inaugural Going for Gold fundraising gala. It was for Edinburgh's Eric Liddell Centre, which you mentioned. She received a reissue of Eric's lost Scotland rugby cap!

Eltham College is a few minutes walk from where I live. Eric was only 6 when his parents left him at the school so they could continue their missionary work. The sports centre at the school is named in his honour.

Hello Hels, A school for children of missionaries? It seems those parents had their own priorities clear in their heads. It seems that indoctrination took place on both sides of the world.
--Jim

It would appear Eric Liddell excelled in anything he did: sports, missionarism, science, humanity. Nice for Scotland to have honored his memory!

I never connected either sportsmen to the film Chariots of Fire. Liddell sounds like a very good man, even if he was a missionary. It is interesting that there was a conflict between sports and the Sabbath, and I suppose that's to be expected.

Well Mr Liddle did better than the brother of an old friend of my mothers who swam for Australia in the first modern Olympics and failed to finish the race !!
He sounds like a very GOOD man . in the deepest sense of the word.

Eric Liddell sent his Canadian wife and two older daughters to go back to her home, once their life in China became too dangerous. The third daughter wasn't even born yet, so Liddell never met her.

Eric's daughter Maureen published her book “God and Me” in 2017.

Although I don't understand rugby, I know how good a rugby player Eric Liddell had been and was capped seven times with Scotland's international team. But it wasn't until Dec 2017 that Scottish Rugby re-issued the Scotland cap to his daughter Patricia who came from Canada. What a long time to wait!

lots of families sent their sons to boarding school, but it sounded like a lonely existence. Did Eltham College have a good reputation for educating and caring for the children of absent parents?

many parents had to make a choice between their careers and their children's happiness, including military leaders, ambassadorial staff, church leaders, theatre and film people. Did the boarding school staff understand how lonely and vulnerable the boarders might have been. Did the parents out in the colonies or missions have time to remember their sons back in Edinburgh?

he was both exceptionally skilled in sport, university studies and religious responsibilities, and very committed. But I think that until Chariots of Fire became famous in 1981, Scotland took their time honouring their hero.

religion and sport could be very happily combined, even if some compromises had to be made from time to time. Especially at a time when sportsmen were amateurs, and depended on their outside careers for financial support.

go back and see Chariots of Fire again, with the new knowledge available. Eric Liddell's three daughters thought the film was an accurate, sympathetic story of their father.

to be an Olympian athlete back then, especially a successful Olympian, gave a person an heroic reputation, at least in his own country. And then dedicating his life to God's work made him a very good man as well. The Eric Liddell Centre was a perfect memorial to a good man - they work with the elderly and the socially isolated.

Hi Hels - interesting to learn more about Eric Liddell - I knew the basics, but not the detail ... thanks for that - cheers Hilary

I think with old news, we may have known the details and forgotten them, or the news didn't even attract our attention years ago. Thus I am very grateful to the film Chariots of Fire, the new facilities in Edinburgh named after Eric Liddell, the great books that were published recently and history blogs :)