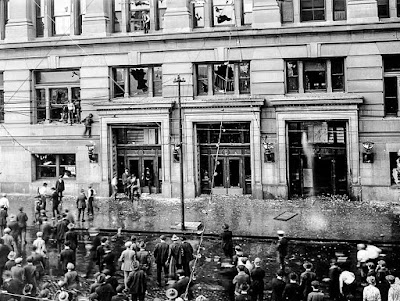 storming the Omaha courthouse
In the U.S, the Red Summer reign of racial terror arrived post-WWI. With an econ­om­ic re­ces­sion and the rising of the New Negro, det­ermined Bl­acks would no longer tolerate oppression. Ex-service­men who’d so re­c­ent­ly fought for democracy in Europe returned home ex­pect­ing U.S’s constitutional promise of equality. Yet during Red Sum­mer, White mobs attacked Black communities in 26 U.S cities.
In Sept 1919, 10,000 Whites stormed the Omaha NE court­house, de­mand­ing the sheriff release Will Brown, an older Black meat­packer. The mob raided the building and when their initial demands were refused, they burned the court­house down and invaded the gaol. They tor­t­ur­ed, mut­il­ated and tied Brown’s body to a car, dragging his corpse into Om­aha’s Black neighbour­hood. Hundreds of grinning White men crowded around. 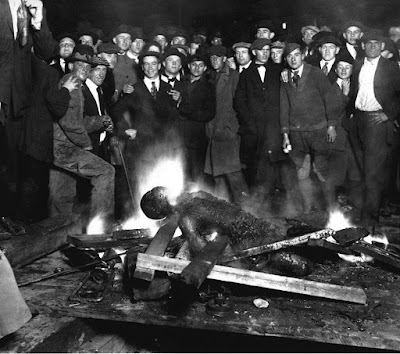 White men burning Will Brown's corpse, Om­aha
Black writers & academics encouraged Black ex-servicemen to fight ag­ainst exclusion and injustice. In Longview Tx, community leader Prof Samuel Jones entered the gaol where local man Lemuel Walters was arrested, for loving a White woman. The in­mates said that Walters had been taken away by a gang of Whites; lat­er an unident­ified Black body was found near the rail­road.
Prof Jones was soon attacked, and the local sheriff promised Prof Jones would be lynched before mid­night, unless he left town. In July 1919, a gang drove to Jones’ house, mounted the porch and yelled for Jones. No Black men were killed in the viol­ence, but appar­ently White men did die. The surv­iv­ing Whites left but re-gathered at day­break, setting Prof Jones’ house alight.

New anti-Black accusations ?were sparked by the film Birth of a Nation 1915. This rac­ist block­buster by D.W Grif­f­iths, inspired by The Clans­man, gave a nasty rac­ist view of Black people; and it glorified the Ku Klux Klan as the protector for Southern White women in the post-Civil War Reconstruction era. Sadly Pres Woodrow Wilson screened the filmed at the White House and loved it.

In 1919, Chicago Race Riots erupted that boiling hot July. Black teen Eug­ene Williams walked to the beach and put his raft into cool Lake Mich­ig­an. The raft crossed an invis­ib­le colour-line drawn in the lake when suddenly a White man began to stone Eugene. To death. His murder sp­ar­ked 7 days of violence when White men drove through the city’s Black Belt, shooting, burning and looting homes. 15 Whites and 23 Blacks died, and 537 more were injured, as noted in Chicago History Museum. Field secretary for NAACP and a det­er­­mined race in­vestigator, Walter White was sent to Chicago to report on the crisis. 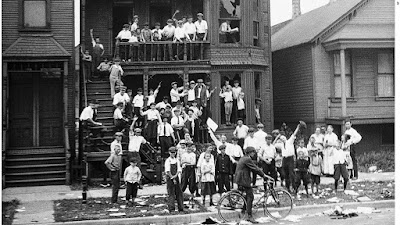 Black home in Chicago taken over 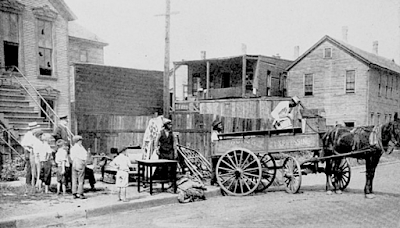 Black families forced out of their destroyed homes in Chicago
Walter heard about a violent mas­s­acre in Arkansas, after Black share-croppers unionised to fight for better wages. The Red Sum­mer clim­axed in exp­loding viol­ence in Phillips County AR. White news­papers warned that Negroes were plotting to massacre Whites and to run state gov­ern­ments. They acknowledged the vicious Black consp­ir­acy was abort­ed, but it had been neces­sary to kill Black revol­utionists to restore peace.
In Sept 1919 Black men gathered to discuss the Prog­res­sive Farmers and Household Union, to address the debt spiral created by White land­owners who cheated Black cotton-farm­ers out of profits. As they left the church in Elaine AR, shooting op­ened up and WW1 ex-servicemen in­side the church returned fire. All hell broke loose. Rumours spread that the Blacks were rebelling, so thous­ands of Whites from Missis­sip­pi, Ten­nessee, Texas and Louis­iana descended on the rural Black com­m­unity, killing c800 Black peop­le. The massacre continued until U.S soldiers from Camp Pike were sent with guns; 285 Black people were arrested!

The men were taken to Helena AR’s court, chained and forbidden law­y­ers. 12+ of the Black men arrested were tortured: White gaolers soak­ed rags with formaldehyde and pushed them into prisoners’ noses, and used electrical shocks against Black genitals, to coerce confessions. After a six-minute trial, 12 Black men were sentenced to death and 75 were gaoled for 5-21 years. 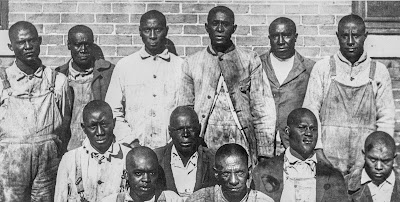 the Elaine Twelve, AR
The racial terror did not end in Arkansas, nor did Red Summer end in 1919. White mobs continued with their hatred/fear of Blacks, and in 1921 in Tulsa OK, the hat­red erup­t­ed into a tragic massacre. In May 1921, Black teenager Diamond Dick Row­land went to Tulsa’s Drexel Building, entered an elevator op­er­ated by a young White woman who screamed and Rowland fled; Rowland was later arr­es­ted for assault­ing a White woman. Whites killed 300 Blacks indisc­riminately. Occ­upied houses of Blacks in Tulsa were set on fire, and when the occupants ran out, mobsters shot them.

Then the Whites des­troy­ed 35+ square blocks of Greenwood, a comfort­able all-Black community, attacking the county court­house, Black churches, 1,200+ business­es, hospit­al, school, library, theatres and banks. At best, Tulsa Police did nothing to prevent the massacre; at worst some police actively part­icipated in rioting. Hundreds of White civ­ilians were deputised and given guns to shoot Blacks. Bodies of Black people were thrown into the Arkansas River or dumped into mass graves but no-one was pros­ecuted! 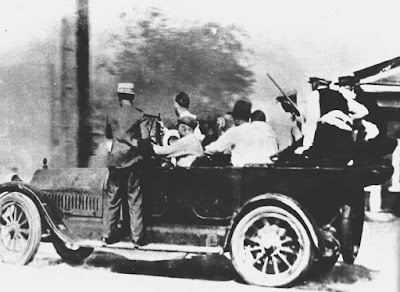 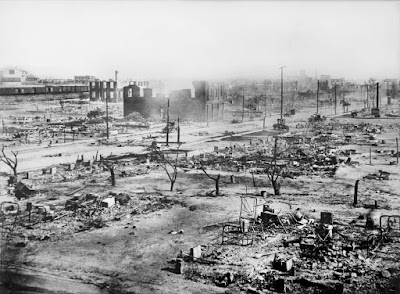 While Australia's history with non whites is far from squeaky clean, that was a horrific read. The worst part is the authorities not acting to protect the black population. Black lives did not matter.

Rise Again, Tulsa and the Red Summer was released in June 2021 on the 100th anniversary of the Tulsa Massacre. This documentary explores the role of media during the 1921 violent racial conflicts and today's revived call for justice for people of all races.

I cannot find the release details in Australia yet.

Unless some racist people were hiding their brains in a fog, I agree that Australian history of racist treatment of non whites was horrible. Ditto South Africa, Rhodesia (as it was), Canada, USA, Brasil etc etc. But I had never heard of the "Red Summer" Massacres, at least until the term was used again recently to refer to the killing of African-American citizens by policemen and armed citizens.

Thank you. I found a review in
https://variety.com/2021/film/reviews/rise-again-tulsa-and-the-red-summer-review-1234999842/, which began streaming on Juneteenth

So the timing is perfect. Juneteenth was officially made into a federal holiday in the United States in 2021, commemorating the emancipation of African-American slaves.

Sad, very sad, especially that I see no radical solution to racial conflicts. Things quiet down, until next time. There's always a next time.
People should have stayed, perhaps, in the land or continent given by God: Blacks in Africa, whites in Europe, etc... The concept of 'move and mix' does not exist in God's book of the world Creation , so no divine solution to it. God gave each ethnicity a territory, and that should have been obeyed. There are things in life, we humans cannot solve, like climate change, for example, which is God's domain only.

Thanks for replying. There was no divine solution to racism because it was definitely a human issue. Imagine when European colonials arrived in Australia or South Africa, for example, and found only black, indigenous communities happily running their own lives. Or imagine how the European colonial powers in USA felt when they had to deal with the four million enslaved people who'd been freed.

The Europeans could have expelled the indigenous or slave populations; "converted" them (as they tried with toddlers in Australia and Canadian boarding schools); make legislation equal for all citizens; or kill those they thought inferior. In Tulsa and other places, they _chose_ murder, rape and arson.

This is for DUTA . God gave us brains and a moral obligation to use them for the good of all mankind . We can do a great deal to make things better and any belief in God should support that . As someone much wiser than me said Bad things happen when good people say and do nothing .

Never taught that stuff to me in school, in California in the '50s. And taught that the California native people were 'primitives, living on acorns etc. Bah humbug to history teachers of that era!
Jim of Olym

you would think the world had learned from these earlier atrocities, but it seems not.

The Uighurs have been a sophisticated and developed people under the Mongols since the C13th, yet have been oppressed and violated by the Chinese for decades. Rohingya Muslims have been attacked, fled to Bangladesh, lost their vote, had their homes destroyed and their young men murdered by Myanmar security forces.

totally agreed. Not only do authorities give immoral instructions regarding the treatment of oppressed minority groups, but bad people (including the police) carrying out the killings and rapes with impunity.

I agree that bad things happen when good people say and do nothing, but I DO feel sorry for them. Anyone who hid a potential victim of the race riots or pogroms risked being murdered himself :(

I don't understand the official silence that followed the post-war years about Red Summer and other tragedies. Did the Federal or State governments ban any newspaper coverage, books or university courses from analysing the events? If not the governments, why did all public discussions largely end by the late 1920s?

But it was not surprised your history teachers either knew nothing about the post-WW1 racist crises or were ordered not to mention them.

The greatest sadness of all is that we don't seem to have made a whole lot of progress, and racial antagonism still resides just below the surface for many. I find Duta's explanation really strange and I wonder about her sources, let alone her belief. Does she rationally think that some deity created black people and told them where to live (Africa) and white people where to live, and so on. Try explaining to the aboriginals in Australia that they should have been in Africa. And African Americans were taken out of Africa as slaves. They didn't decide to move. Surely at some point we will evolve to accept that skin colour is cosmetic and that integrally we are all the same. But for every step forward we seem to take two back.

Australian aboriginals were the indigenous population of Australia... they didn't come from Africa or any other place. European colonists, on the other hand, were the invading newcomers. But I agree with your main point. Skin colour, eye shape or type of head-covering are shallow, cosmetic indications of human value.

But to see how popular those views were in the late 19th century, I looked at Barnum and Bailey Circus programmes. They presented African and Asian citizens in a vast animal park in which Civilised Whites were the zookeepers looking after the sub-human Primitives. Fascinated Americans flocked to the circus displays in huge numbers.

I understand perfectly well, of course that the aboriginals of Australia did not arrive from elsewhere. I was simply trying to point out that by Duta's logic it was decreed by some god that black people had been assigned the continent of Africa, and should remain there.

thanks for the clarification. It is important that we humans take responsibility for racist oppression and act positively whenever it raises its ugly head. Did you see the racist attacks this week after the British-Italian soccer final? Very ugly.