Many thanks to "Rapid Relief by Rail",  History of Medicine, 2021. Trains had already been used in the C19th and early C20th, in the Crimean War, American Civil War and Boer War. But railways weren’t fully utilised until the first truly industrial war, WW1.
Even before WW1, the British government was secretly prepar­ing for battle. By 1912 the British govern­ment created the Railway Executive Com­mittee to ensure the smooth run­ning of the railways into the future. Antic­ipating mass cas­ualties of a Europe-wide war, they met the manag­ers of Britain’s rail­ways  to design capacious ambulance trains. 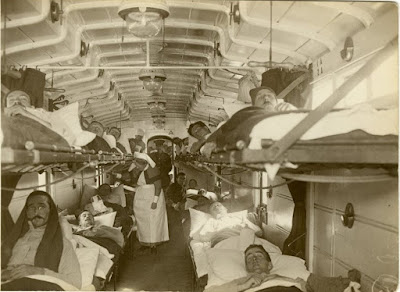 Wounded soldiers in their bunks
being checked by medical staff 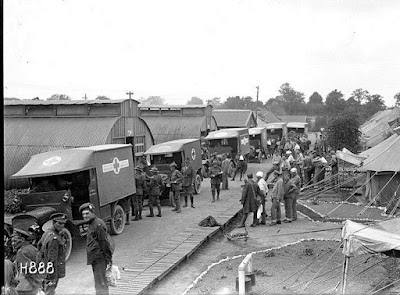 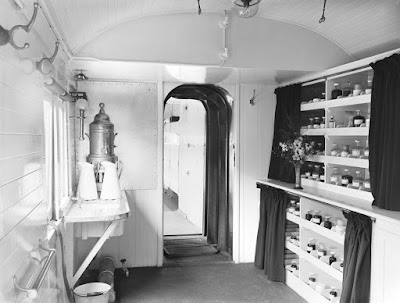 Pharmacy being loaded up before ambulance train departs
But just as thousands of British workers were leaving to join the ar­my, many railmen were barred from volunteering; they were ess­ent­ial workers during the war eff­ort. For indust­rial labourers and engine­ers far from the front, this was their chance to contribute, and they did so with great speed. They built ambul­ance trains and railway companies supplied stretchers, guns, shells and veh­ic­les.

In Aug 1914, car­r­iage builders worked around the clock to prep­are the trains and to build the vital fittings. The Comm­ittee dev­ised plans to build 12 ambulance trains, to move casualties around once they got back to Brit­ain. With patriotism booming, the rail com­panies geared up.

It was quickly clear that the hospital trains would­n’t be needed just in Britain. So in Dec 1914, the first Contin­ental Amb­u­l­ance Trains to be used in France were sent. There they provided support close to the front lines and a vital link in the military medical system. The Fren­ch railways were already struggling to evacuate injured soldiers.

In WW1 huge numbers of injured sold­iers needed to get away from the front lines, often carried by stret­cher bearers. At Reg­imental Aid Posts (just behind the lines) and Advanced Dressing St­ations (further behind the lines), men received basic treat­ment. This included deter­mining wh­ether they’d survive long enough to just­ify ongoing treat­­ment. If so, they were taken onto a Continent­al Amb­ul­ance Train, where they were treated and taken to a Base Hosp­it­al in a port city: Rouen, Calais or Boulogne.

For Britons being evacuated home, hospital ships provided the next leg of their trip - converted passenger liners carrying med­ic­al staff and facilities just like the trains. But here was an extra dan­g­er: being torp­ed­oed by enemy submarines in the Chan­n­el.

The first casualties arriving back in Britain were tak­en from hos­p­ital ships at Southampton to Netley Military Hosp­ital. But as more casual­t­ies arrived, Home Ambulance Trains took pass­en­g­ers to newly opened hospit­als across the country, as distant as the Scottish highlands.

All ambulance trains needed 15-20 carriages, to include wards for in­jured soldiers, pharm­acies, emer­g­ency operating rooms, kitchens and medical staff quarters. Each train had French cooks working in the kitchen car to feed every­body. The rationed food served was basic, but the meat stew was very wel­c­ome. Med­ical officers and nurses shared a mess carr­iage for meals and recreat­ion.

Ambulance trains were run by 3 Royal Army Corps medical off­ic­ers who examined each wounded sold­ier, and 3 Queen Alexander Nur­s­­ing Ser­vice nur­ses who prov­ided medical care under doctors’ ord­ers. The army doc­t­ors, all officers, kept records in the train office, record­ed the drugs of the wounded men and decided their treatment. The 6 med­ical staff lived onboard the trains semi comfort­ably eg baths. The pharm­ac­ies were stocked with morph­ine, medicines and bandages, to keep the wounded stable on route to hospital.

As soldiers boarded the train, medical officers checked their wounds, tri­aged the men, decided on treatments and separated the off­icers from enlisted men. Working on the am­bulance trains involved endless effort; doctors and nurses worked day & night treating their patients’ wounds. Even when the pat­ients were fin­ally unloaded, nobody rested until the train was cleaned and beds made.

Each ambulance train could carry 500 patients and was run by 50 staff. The majority of these were orderlies, who gave water to pat­ients, ch­anged dress­ings, fed all the passengers and cleaned the train. For ev­ery new load of passengers, there was a long list of jobs to be done. Staff regularly worked through the night to ensure their pat­ients’ needs were met. They all ran the constant risk of catching lice or infectious diseases, or being bombed.

For patients, life aboard an ambulance train could be a life-saving experience or a horror. Firstly pat­ients were thankful to be on board and mo­ving away from the Wes­­tern Front, and were supplied with beds, food and medical care. And soldiers from all over the world symp­ath­ised together, Brit­­ish, French, Ind­ians, Australians, New Zealanders, Canad­ians, Americans and captured German casualties.

But travelling on an ambulance train could be gruelling. Ward cars had to carry as many men as possible in the three-tiered bunk beds, so patients often felt cramp­ed and uncomfortable. When the train jolted, broken bones hurt. Some of the men had been shot or stabbed. Others were the victims of pois­on gases that burned the lungs and bl­istered the skin. Many others suffered from diseases affecting men straight from the trenches, so the trains quickly became filthy, smelly and cramped. 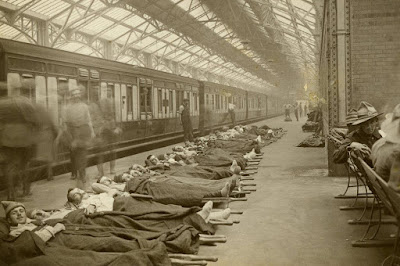 Patients lay on stretchers on a British station platform,
off the ambulance carriages and waiting to be taken to hospital.
As well as being physically wounded, many soldiers suffered post-traumatic stress disorder from the psychological effects of war. The eff­ective treatment of mental illness had not yet been developed, so patients had to be locked in secure padded cells.

By 1918, British Railway Companies had put 51 ambul­ance trains into service, 20 for use in Britain and 31 for the Cont­inent. A total of 2.7 million wounded soldiers had been taken from the front, many of whom lived!

Credit for all photos: Science Museum Group.
Posted by Hels at 13.7.21

I got this from Anzac Portal.

In World War I, the Australian Imperial Force lost 60,000 men and had 152,000 wounded. To help deal with so many injured and sick soldiers, the Australian Army Medical Corps provided doctors and nurses at its Australian Casualty Clearing Sections in France. But if the soldiers required intense hospital care, they too were put on an Ambulance Train.

I certainly knew doctors, nurses and stretcher bearers from Australian Army Medical Corps staffed important posts, in Egypt, Palestine and France in particular. But I hadn't thought much about our role in the ambulance trains, either as staff or as patients.

What I do need to think about more was our railway men's role in WW1.
https://nrm.org.au/connect/blog/12-australian-railwaymen-in-war

The Brits excelled in many fields, so no wonder they were also good with ambulance trains. With so many battles going on, and so many wounded soldiers,there was great need to take away the casualties from the front lines, and the ambulance train did the job.
Nowadays, for rescue operations, helicopters are mainly used

Hi Hels - it must have been an awful time ... but fascinating to find out more now-a-days ... all the best - Hilary

Absolutely true! It was so terrible when a nation had to send its young men into the trenches, knowing that so many of them would be killed or wounded so badly their lives would be seriously compromised. Of course it was worse for the parents/widows back home, who would never their sons/husbands again, so at least the British government did everything it could to save those wounded men who could be saved in a large hospital.

Helicopters are thankfully much faster, but they can only take one or two wounded men at a time. The train ambulances took 2.7 million wounded soldiers from the front to hospital in just 4 years.

it is a very long time since WW1, yet it is not just historians who are still fascinated in the War To End All Wars. It defined nationalism and internationalism for most countries even today, especially for my contemporaries who heard all their grandfathers' stories.

me too :) And I have taught a lot of Edwardian-1920s history in my career.

Trains. Where would we be without them. I wonder if train ambulances were used on WWII.

Yes indeed. In the German advance into France in WW2, ambulance trains evacuated the wounded and allowed surgeons to operate while travelling. However of the 14 hospital trains that were in use in France, 9 were lost through Luftwaffe bombing. WW2 train ambulances were also used to transfer the wounded to the permanent UK Military Hospitals. Sanctioned by the UK Railway Executive Committee, the main line train companies actively helped the Army, Navy and RAF with supply and management of the ambulance trains, just as they had in WW1.

Thankfully medicine and surgery were more sophisticated than they had been back in 1914.

I feel so ignorant as I was unaware of these ambulance trains. Thank you once again for educating me

Hello Hels, Not just during the wars, but all the time orderlies are among the great unsung heroes. Even nurses often get recognition, but orderlies get the worst jobs for the smallest pay and respect. On another note, in addition to medical transport, there was a tremendous need to house the injured once back home. I have read in the histories of so many grand British houses that they were volunteered or commandeered as hospitals.
--Jim

A fascinating post, I had not heard of this aspect of WWI before.

I would also not have known about the ambulance trains, but for The National Railway Museum in York. The stories and exhibitions were wonderful.

thank goodness that the doctors, nurses and other hospital staff were protected from conscription because a] their work at home and abroad was essential and b] they worked in their professions to save lives, not to kill people. If I was conscripted, I would NEVER hold a gun, but I would have been proud to do warwork in a ambulance train or something like it.

Re the orderlies, I assume they always got the worst, most underpaid jobs, during the war or any other time.

I don't understand why there was so much about the War to End All Wars that historians did not write about. After all how would all future wars be avoided, if humanity didn't learn all the details of WW1?

Thank goodness in the carnage of WW1 there were some wonderful stories of humanitarianism. Look at some of the writing from the archivist at the National Railway Museum:
https://blog.railwaymuseum.org.uk/tag/ambulance-trains/