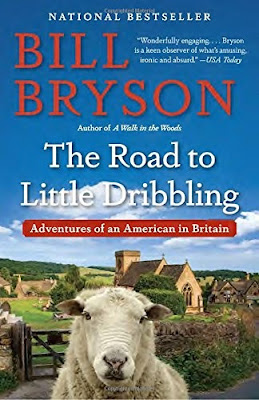 The Road to Little Dribbling
published 2015
Bryson travelled around Britain, to cele­brate the green and pleasant land that he called his own country. His book, Notes from a Small Is­l­and (1995), was the bestselling travel book ever, and one I loved. But he was rude. Remember the story in Notes in which Bryson was stuck in a train carriage with a railway enthusiast. The man went on endlessly, with Brys­on stoically enduring the boredom, at which point the mood ch­anged. Bryson learned the man's wife had died relatively recently, so he snapped: "Suicide, I would guess." How VERY rude!
Later, to mark the 20th anniversary of this classic, Bryson made a new journey round Britain (2015). Bryson again gave a perceptive insight into all that was best and worst about modern Britain in his book The Road to Little Dribbling (Double­day 2015). Following a spinal route from Bognor Reg­is on England’s south coast to Cape Wrath in the Scot­t­ish Highlands, Bryson set out to RE-discover the beautiful country that he once knew. Each village en route led him to a tale of intrigue, his­tory and goss­ip. And despite Britain’s occas­ion­al dil­em­m­as, Bryson was still in love with his country, even though he lamented a count­ry that had become ov­erly tolerant of stupid­ity.
As in his previous outing, The NY Times described how Bryson used visits to historic sites like Runnymede and Sutton Hoo to reflect on the true and otherwise details of Britain’s past. An outing in the New Forest prompted a discussion of Arthur Conan Doyle’s spiritualism; in Oxford, he wrote the story of Roger Bannister when he saw the track where he ran the first sub-four-minute mile. He scanned the tranquillity of the Cornish fishing village of Mousehole and the sadly diminished down-market resort of Blackpool.

He was constantly complaining about rubbish, il­l­it­er­acy, poor mann­ers, mediocrities, rip-offs and talent­less celebrit­ies that infested the place since he first arrived back in the 1970s. But once again, see his matchless romp through the funn­iest, the most ridiculous and the most scandalous. The latest Bry­son travel­ogue him showed him to be older (64) and grumpier, just like any ol­d­er Brit­ish man. But read­ers will enjoy this just as much as earl­ier books. 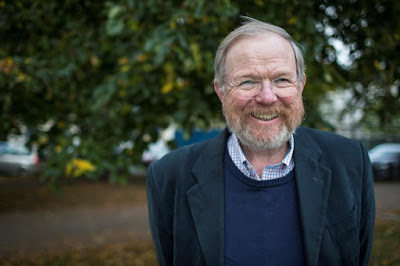 Bill Bryson, Hampshire
2017
Bryson felt perfectly comfortable to gush, despite the cynical impulse of our times. At the same time, he was equally comfortable to unleash his inner killjoy: He wrote: Eastleigh appears to have been heavily bombed during WW2, though perhaps not heavily enough! Or later, desc­ribing a local bus: It was the sort of vehicle you would expect to be put on if you were being transferred between prisons. Rudeness popped into his head and out his mouth without censorship, which every Aust­ral­ian and New Zea­l­ander und­erstood. However I would call Antipodean humour iron­ic, and Brys­on’s humour sarcastic.
In May 2007, Bryson became the passionate president of the Campaign to Protect Rural England. There wasn’t a land­scape in the world that was more artfully worked, more lovely to behold, more comfortable to be in than rural Great Brit­ain, he said. His argument was won by sneaki­ness, with charm and learning. And he still lives in the UK. 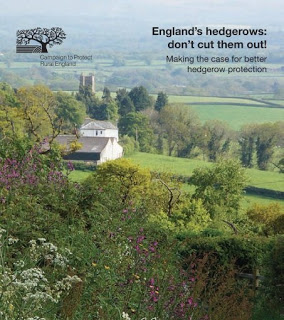 A Campaign to Protect Rural England poster
While we are talking about Australia, Bryson travelled across this nat­ion, exploring from a tourist’s perspective and seeking to und­er­stand what made Australians unique. In book, Down Under (Random House 2001) was also funny. Even though Australians knew a lot about Austral­ian history, Bill Bryson’s persp­ective could be very mind-expanding. As with every American tour­ist I ever met in Australia, Bryson focused on the many dangers of native Aust­ralian animals and used this medium to ex­amine the classic ch­aracteristic of Australians, that of underst­ate­ment. While surfing in Sydney he asked his host “What about sharks?” The host responded “Oh it’s been ages since someone was killed by a shark; months at least”. 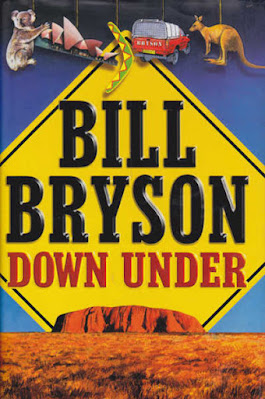 Down Under
published 2001
Bryson’s reaction to Australian under­state­ment reminded me how much we take our casual attitude for granted. Austral­ians sharks were part of our painful history, but we still went swim­ming! Only an outsider like Bryson showed us how unique (and stupid) we were. It was huge proof that it took an outsider to see the truth about our own country.
Posted by Hels at 23.2.21

Hi Hels - I've just read his Little Dribbling one - as it features The Seven Sisters coastline ... a stunning beauty spot around here (Eastbourne) ... it's great fun and I imagine his others will be too - good to see another nod to him quite so soon. All the best - Hilary

Local writers may not be nearly as insightful as foreign visitors, as you noted. They aren't loaded down with national myths, like we are. But they might be read as rather rude, by local readers.

I read the first two books you mention and they were terrific. I meant to read more of his works but I haven't yet. While Australians like to play up the dangers from critters here, who me? I can't say I've ever felt threatened by animals and I doubt you have either, unless it was a stray and rabid dog!!! Look out for them tourists...oh, we don't have any tourists at the moment.

Hello Hels, I have read several of Bryson's books, and have a love/hate relationship with him. While he can be intelligent and witty, he often ruins this by being not only rude, as you mentioned, by also unnecessarily crude and vulgar, which I detest. Also, he has a tendency (in common with many modern authors) to go into uninteresting backstories in excruciating detail. I kept wondering where his editors were all the time.
--Jim

A very popular author but I've not got round to reding his work yet.

I have not read his books yet although my fellow walkers enthuse over them.

I have got a couple downloaded to audible and waiting to be read.

I thought Bryson's writing career was over and didn't look out for The Road to Little Dribbling. So I am very pleased to read your recommendation.

it comes with the territory, doesn't it? A person from another country is not loaded down with our traditions, national myths, long British history and passion for cricket, so he/she can be more clear-eyed and honest. But if a foreigner wrote that Melburnians are old-fashioned and obedient because they rely on trams instead of buses, I too would be very peeved.

I have been in a social network (mirc) since 1993 which started as an Australian channel but has become more American-populated over the decades. Despite Australia being most famous for inventing: the application of penicillin, cochlear implants, Wi-Fi technology and ice-making machines and refrigerators, Americans know ONLY about our snakes, sharks and poisonous jelly fish!

vulgar language in writing indicates the author's anger, frustration or intentional connections back to his fair dinkum working class roots. But for the reader, vulgar language is horrible :(

I wonder if there was a no-editor-interference clause in the contracts.

I know nothing about his books on science and language.

I am not at all surprised that your fellow walkers enthuse over Bryson's travel books - they are the perfect audience: middle aged, literate and open to new discoveries :)

I have enjoyed a few of Bryson's books (but not recently) and although, I enjoyed them, one thing that struck me was that an outside observer can sometimes reveal to us things about ourselves which we not not seen! If you remember the round-the-world yachtsman, Sir Alec Rose, he was once interviewed by Michael Parkinson who asked him what was the one piece of advice he could give after his epic journey. Sir Alec answered, "I would station a special ambassador to report back from New Zealand because things in the UK seem so much clearer from that distance." Maybe Bryson serves a similar purpose!
CLICK HERE for Bazza’s wonderfully withering Blog ‘To Discover Ice’

I believe that Bryson definitely served and still serves a similar purpose, but I don't think that was Bryson's original motive. He had a wonderful time in Britain the first time, but when he returned to Des Moines in 1975, he seemed to think he was home to stay. Moving back to Britain permanently was not the decision that would have been expected from an outside observer and teacher.

I hope so too. You will enjoy it.

Throughout my Gap Year back in the 1960s, I was surrounded by 110 South Americans and only 10 Anglo Saxons. So it seemed sensible to learn Spanish and Portuguese as quickly as I could. Spanish was relatively easy for me :) ... Portuguese was impossible :(

William McGuire Bryson OBE HonFRS (/ˈbraɪsən/; born 8 December 1951) is an American–British author of books on travel, the English language, science, and other non-fiction topics. Born in the United States, he has been a resident of Britain for most of his adult life, returning to the U.S. between 1995 and 2003, and holds dual American and British citizenship. He served as the chancellor of Durham University from 2005 to 2011.[1][2][3][4]

Thank you. Which of his books did you enjoy most?