Few artists have captured Australian history as convincingly as Sid­ney Nolan (1917–92); his most iconic old works were synon­ymous with Australian mod­ernism. Nolan was known as an artist who celebrated the human spirit, so this story was previously unknown. Many thanks to Andrew Turley.

By 1939, in Mel­bourne, Nolan first painted the darkness of concent­r­ation camps with deep feeling. Prison Camp was brushed over a news­paper photograph of Buch­enwald Germany inmates wearing striped uni­forms. In 1944 he painted Lublin, the Polish city that before WW2 had been an important centre of Jewish culture. It featured two buildings pierced by square windows, each window trapped a single distraught face below a row of chim­neys (crematoria).

The Nazis had established a ghetto within Lublin’s city limits to house “relocated” Jewish and Polish families. Overcrowd­ing, disease and starvation sapped their strength as they waited to be shot in the forest, or packed in­to the gas chambers of Maj­dan­ek, Bel­zec or Sobib­or. By late in WW2, Lublin's Jew­ish population had been er­adicated.

By June 1955 Nolan was living in London, where he saved disturbing newspaper art­icles revealing new horrors of the Holocaust. But it was the capture of one of the Holocaust’s most notorious German of­fic­ers, Adolf Eichmann, that created the catalyst for Nolan’s jour­ney to Ausch­witz. Eichmann had disappeared after the war and had been tracked to Argent­ina where, in May 1960, he was caught by the Israeli Int­ell­ig­ence ser­vice, Mossad. He was smuggled back to Isr­ael, charged with crimes against humanity and in Apr 1961, went on trial in Jerusalem.

At the Eichmann trial, The Observer had asked Al Alvarez to write about the concen­t­ration camps in Poland. Alvarez talked about it with Nolan, and agreed that if Nolan could paint the camps, it would be a duty to do so. Nolan agreed!

The camps already haunted Nolan, so he made notes on how he'd paint them. In Nov-Dec, in the weeks before Eichmann’s jud­ges passed sent­ence, Nolan repeatedly filled sheets of paper with the one notorious prisoner. Some were simple out­lines, others fully formed, but every image had a broad forehead, receding hair, thick glasses and thin lips.

In Dec 1961 Eichmann was found guilty of crimes against the Jewish people, again­st humanity and of war crimes. Nolan was re­luctant to dig deeper into Europe but when Eichmann was sen­tenced to death, it pro­vided the release Nolan needed. He then switched from Eich­mann’s face to painting 100+ images of con­centrat­ion camp inmates, keeping them with the Eichmann portraits in his Judges and Victims folder. The first group was char­­­ac­terised by prison stripes. The second group were wreathed in smoke, which sudden­ly cleared to ex­pose harsh heads with screaming mouths. The third group were skelet­al heads, tortured and twisted. His icon­og­raphy was clear; with an economy of strokes, Nolan’s pictures displayed nothing to redeem the human race. 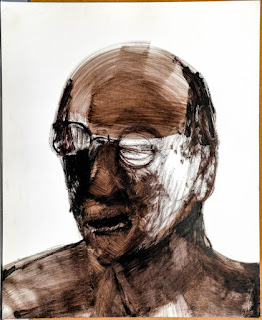 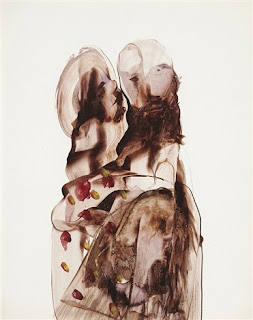 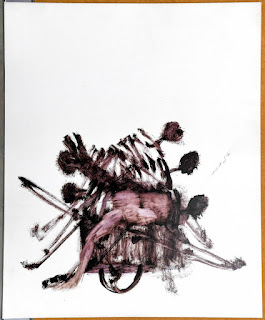 In Jan 1962, Alvarez knew Auschwitz was a difficult experience to handle, even as a visitor. Nolan saw piles of human hair, suit­cases, spectacles, shaving brushes, artif­ic­ial limbs. Great mounds of old shoes reach up like rubble, all of it cov­ered in dust and human ash. In his autobiography, Alvarez remembered that Nolan was upset by these horrific relics. AND also by the order­lin­ess of the camp’s layout. The interiors of the barracks were horror-filled, especially the tiers of bunks in which the prisoners slept, six men to a bunk, waiting to be slayed.

Overwhelmed, Nolan refused to illustrate The Observer article. It was an emotional experience that triggered an unexpected retreat from any direct Auschwitz imagery. Alvarez added to Nolan’s emotion­al turmoil in 1962 by sending a draft of his article, suggesting that in modern times all humanity had the capab­ility to be inhuman. If the camps were simply the play­grounds for sadists who, in another soc­iety would have been locked away, then they were an aberration best forgotten.

From Sept 1962, Nolan chased visions of paradise in a 3-month trip in Africa. But a deep well of grief ran through the res­ulting work. There were faces & figures of tragic tribes and races, subjugated by colonial empires. In 1965, Nolan briefly placed apes and saints on smoking crosses while helmeted Nazis mar­ched beneath or leered at women. Psycholog­ically unable to trans­late the exper­ience into paint, Nolan continued to stare into the pit and avoided speaking of the Holocaust for 20+ years. 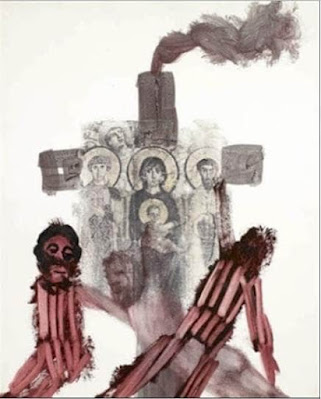 Sidney Nolan, Auschwitz, 1965
63 x 52 cm
aCOMMENT
This powerful 1965 image was from a series he painted years after visiting Auschwitz. Two camp labourers lowered a naked body from the cross which held religious icons, one including the Christ child. The cross doubled as a chimney and the smoke belched out.

A few years ago Andrew Turley uncovered, in the Nolan archives, a haunting series of works relating to his journey to Auschwitz in 1961; this year, 2021, marked the 50th anniversary. To mark the event, the Sydney Nolan Trust exhibited the Auschwitz artwork that Nolan had created. And the anniversary of Eichmann’s trial is a good time to re-examine Nolan’s warning. Look back to the crem­at­oria and barbed wire, and along with Nolan's exploration of our lesser nature, acknowledge and honour the millions of ghosts.
Posted by Hels at 6.2.21

I feel so sorry for our Australian artist. Nolan knew how deadly the camps had been and was already deeply disturbed. He should never have travelled to Poland. He should have illustrated the Eichmann trial instead, dreadful but better than Auschwitz.

Sidney Nolan was strongly against Australia rushing into WW2 and did everything he could to avoid being conscripted himself. He believed that soldiers became psychotic as a result of the killing. Nonetheless he was conscripted in 1942 and ran away, without leave, in 1944. In June 1946 he was discharged in absentia for his misconduct, changed his name and couldn't reappear until an amnesty for deserters was issued in 1948.

No wonder he was still suffering war damage in 1961.

I am only a bit read not well read on Nolan and I didn't know about this part of his life. Quite shocking and clearly the experiences affected him badly. He was a complex man, for sure.

I think if we ask Australians who was our most famous C20th artist, a lot of people would choose Sidney Nolan. Presumably everybody across the nation is familiar with all the Ned Kelly paintings. So although I was never a Nolan fan myself, his war experiences in the 1940s and in the early 1960s were indeed terrible. The more we read about his battle years, the better his later career can be understood.

Hello Hels, I don't think it is possible for any mind to fully compass the enormity of the Holocaust. I can imagine that writers and artists, like Nolan, used to translating reality and ideas into metaphor, would be particularly affected by this event, the horror of which was so out of scale with any other.
--Jim

I agree with you totally and would never have travelled to an extermination camp myself, for that very reason.

But look at aCOMMENT to see the work Nolan had already done in the 1950s: crucifixion, pain, horror and death. He must have been already traumatised, years before the Eichmann Trial and his trip to Auschwitz.

thank you. I actually preferred Albert Tucker, John Brack, Russell Drysdale, Arthur Boyd and other mid century artists, but this was an important story for a different reason. Did artists have a moral obligation to illustrate horrors, to prevent them happening again? How did artists deal with the devastating consequences on their own mental health?