A maritime mystery since 1872: the Mary Celeste

The 282-ton brigantine Amazon was built in 1861 in Nova Scot­ia Canada. In Nov 1872, and now called Mary Celeste, the ship sailed from New York Harbour en route to Genoa. It was a merch­ant ship with a tricky past so presumably the name change was to dis­associate itself from a series of mishaps eg the sudden ill­ness and death of its first captain; a collision with another ship in the English Channel. 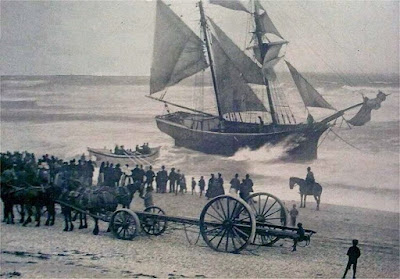 The Mary Celeste, still in full sail, was taken back to Gibraltar
by Capt Morehouse and his crew
On board for the 1872 trip were the ship’s captain, Benjamin Briggs, wife, toddler daughter and 8 trusted crew members. After leaving New York, Mary Celeste bat­tled through treacherous seas and howling winds for two weeks. According to the last entry in the ghost ship’s log book, written 25th Nov, the Mary Celeste was within sight of the Azores island of Santa Maria west of Portugal. Nothing was amiss, according to the log book.

Less than a month later, a passing British brig called Dei Gratia spotted the Mary Cel­este at full sail and adrift c450 miles east of the Azores, with no one aboard. When Captain Morehouse and his crew boarded the Mary Celeste, they found it largely in good order. Aside from the disassembled pump, sev­eral feet of water in the hold and a miss­ing life­boat, the ship was und­amaged. In fact the ship was still loaded with 6 months’ food and water, and well packed crew uniforms. Even the cargo was intact, apart from some empty alcohol barrels. But there were no humans :(

The ghost ship was still seaworthy, so the crew of the Dei Gratia split up and together the two ships sailed to Gibraltar where they could claim salvage rights under maritime law. When the two ships arrived in Gib­raltar, the Dei Gratia submitted its salvage claim from the insurers. The admiral­ty court at first suspected foul play. But after a 3-month investig­ation, the Dei Gratia crew event­ual­ly received payments. Not the full value, to be sure; were the author­ities not totally convinced of their innocence?

This maritime mystery continued: Why would a captain such as Briggs, or his sailors, ab­andon a perfectly sound ship: mutiny? pirate attack? giant squids attacks? an explosion caused by fumes from the 1,700 bar­rels of crude alcohol in the hold? A blast large enough to persuade an experienced captain to take the terrible decision to abandon ship would have left signs of fire or explosions on the wooden barrels, or in the hold. 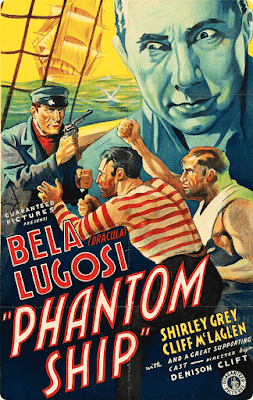 The short story and the film
made the Mary Celeste story widely known
Sir Arthur Conan Doyle suggested in a short story,  J. Habakuk Jephson’s Statement 1884, that the inhabitants of the ghost ship fell victim to an ex-slave seeking vengeance. And The Mys­tery of the Mary Celeste was a 1935 British mystery film directed by Denison Clift and starring Béla Lugosi. It was called Phantom Ship in the USA.

Why was the ship abandoned? There were numerous competing theories on exactly what happened to Capt Briggs and the other people on board:

1. CRAZED MUTINY Initial checks of the ship found strange marks left by ?axes, along with traces of ?blood. The Attorney-General and his inquiry team believed the crew became violently drunk on the ship's cargo of alcohol, mutinied and then massacred men before taking the ship's sole lifeboat. Unlikely, as there was no sign of violence.

2. CRIMINAL CONSPIRACY Many suspects have been im­plicated in the case of the Mary Celeste. Could North African pirates have attacked the ship and killed the crew? Unlike­ly, since no val­uables were missing. Even worse was the idea that it was an inside job, with Capt Briggs faking their deaths to claim the salvage money with a co-conspirator.

3. ALIEN ABDUCTION Many people improbably suspected that aliens ap­peared and whisked away the crew. This was likely due to the Dei Gratia crew finding the Mary Celeste in a reasonable condition.

4. NATURAL DISASTER Perhaps the Mary Celeste fell foul of a tornado at sea, or perhaps a sudden violent seaquake. Either of these events could have caused superficial damage and some waterlogging, perhaps making the crew think the ship was about to sink. Thus the lifeboat.

5. ALCOHOL EXPLOSION Perhaps the best theory related to the ship's cargo of industrial alcohol. Whether due to turbulence or porous barrels, noxious alcoholic fumes may have escaped, making the crew think an explosion was imminent. Then, fearing fire, the crew aban­doned ship temporarily, at least until the danger had passed.

But a captain would only abandon ship in the direst situations, and the circ­umstances found on the ship certainly didn’t seem dire. For all of the above theories, none of the evidence ever matched. In any case, Mary Celeste later sailed under different owners for 12 years. 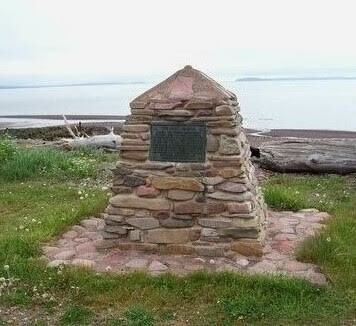 Mary Celeste Monument
Diligent River, Nova Scotia
In the end Anne MacGregor's documentary, The True Story of the Mary Celeste 2007, suggested that rough seas, a faulty chrono­met­er and a clogged onboard pump ?led Briggs to order the ship aband­oned, shortly after sighting land. MacGregor’s theory was not prov­able, but I was at least grateful that the alien abduction was losing favour.
The Peabody Essex Museum is the home of the surviving Mary Celeste artefacts. It’s located in Salem Mass, up the coast from New York. Or visit Maritime Museum of the Atlantic in Halifax Nova Scotia. Thanks to Smithsonian, History and Museumhack.

I wanted to see what people thought back then. Newspapers were rife with speculation, as can be seen in the contemporary (1872 and 1873) newspaper articles in this blog:
The Mystery of the Ghost Ship ‘Mary Celeste’
by Tony Pettinato December 4, 2018
https://blog.genealogybank.com/the-mystery-of-the-ghost-ship-mary-celeste.html

Thank you! We really need to read contemporary reports because they are more heartfelt and urgent, whereas 150 years later the reports are more scientific and remote. For example in 1873 they wrote "manifests, bills of lading and every document which might have afforded any clue to the history of the vessel had been removed...The probability is that the vessel was seized by pirates, or taken possession of by her crew, and that a terrible deed of blood was done before she was finally abandoned".

Hello Hels, The Mary Celeste mystery, like the case of Lizzie Borden, will never lose its appeal either to true historians or conspiracy crackpots. As you have documented, there are several types of theories, and plausible explanations to counter any of them. Since the physical and documentary evidence is/was missing or badly handled, anyone can set himself up as the next expert or clairvoyant. My own question is if the captain's papers were removed (as in an abandonment of the ship), why was the log kept on board?

Between accidents, natural disasters, dishonest captains and crews, and pirates, it seems a miracle that the basic system of sea transpiration worked as well as it did in those early days.
--Jim

Some things will forever remain a mystery and this is one of them. Thanks for the historical snapshot.

This reminds me of the more modern loss of Malaysia Airlines Flight 370.

Both are still a mystery.

And I agree with you that sea travel was very dangerous. So conspiracy theories blossomed there.

Blogging is important, yes :) I had heard of the story as a sort of a fairy tale, but noone had ever offered evidence.

Historians normally give extremely definitive evidence in their writing. You know what I mean... "the king went into his wife's bedroom on Wednesday at 8.30 AM and they had tea together. Then he handed her the divorce papers and went hunting on a horse called Spot".

Some historical mysteries will definitely remain.

Spot on! The loss of Malaysia Airlines Flight MH370 has created even more conspiracy theories than we know about. Like shipping, airline travel is potentially dangerous anyhow. But on top of that, we need to add anxiety about foreign governments, spying, technology, capitalist profit making and Cold War history.

This was essentially the prevailing theory during the actual salvage inquiry in 1872. Naturally the court suspected foul play by the crew of the Dei Gratia, but they could find no evidence. On top of that, the captains of both ships had been friends. And the fact that no evidence of violence was found, this theory doesn't feel right.

Alex Johnson
What Really Happened to the Mary Celeste
October 29, 2019

Thank you Alex.
It is interesting that you write that the Attorney General of Gibraltar, Frederick Solly-Flood, led the salvage inquiry and clearly suspected foul play by the crew of the Dei Gratia. Commissions were there to test all possibilities, not to prefer one explanation over the others, before they even started.

In any case, you say that after over three months of stern, bewigged British inquiry, the court found no evidence of foul play.

thank you. When there is no true understanding for a crisis, all sorts of explanations emerge. Have a look at the thinking about the fire that utterly destroyed Crystal Palace in 1936.

Some posts draw hundreds or even thousands of readers, and others are lucky to hit 100. So I am very pleased that the story of the Mary Celeste is still fascinating.