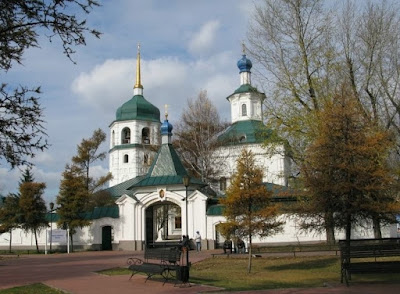 Znamensky Monastery
Just north of the Mongolian border, Irkutsk was the crossroad of old trade routes, between the Angara and Irkut Rivers. The town was founded around a wooden fort in 1661 and later became the capital of Eastern Sib­eria.

Epiphany Cathedral is one of the most expressive sites in town. Originally built in wood in 1693, Epiphany was de­s­troyed in a fire. The church was then rebuilt on site in 1731, but in stone. Construction on the second bell tower began, in the Russian classical style. In 1934, divine services in the cathedral stopped and it was closed until restoration work began in the 1980s. Now it appears almost in its original form, linking Russian Classical and Baroque styles. Its facades are decorated with multi-coloured glazed tiles, with images of flowers and mythical animals. 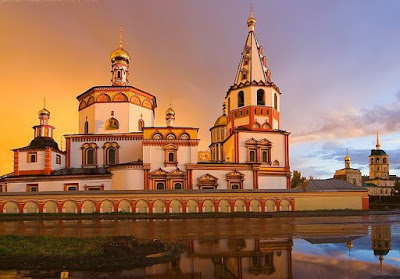 Epiphany Cathedral
Irkutsk Regional Museum of Local Lore, the oldest museum in Siberia (1782), holds historical and cultural treasures. The col­­­l­ection came from expeditions of Asian scientists in the Rus­sian Geog­­raphical Society. Objects, documents & photos charact­er­ised the life, material and spir­itual cul­ture of the peoples of Siberia, Far East, Korea, China & Mongolia.
Many of Russia’s Decemb­rist rev­ol­ution­aries, drawn from the arist­oc­r­acy and younger army officers, dev­el­oped as a secret society to ab­olish the despotic reg­ime in 1825. They were exiled to Irkutsk after their detention. Irkutsk Historical and Memorial Museum of the Dec­emb­rists has 2 memorial estates in the historical centre of town.

Znamensky Monastery was a great architectural and economic form­at­ion. The wonderful interior has muralled vaulting, a towering icon­ostasis and a gold sarcophagus holding the precious relics of Sib­erian missionary St Inokent. In 1872 at the monastery was opened the hospital for monks. In 1889, they operated a female spiritual school. The mon­ast­ery also served as a hospice, and sometime later as a parochial school and orphanage.

The development of Siberia was hampered by poor transport links with the rest of the country; for 5 months of the year, unfrozen rivers were the main means of transportation. The first railroad projects in Siberia were promoted after the Moscow-St Pet­er­sburg Railway was completed in 1851, to advance colonis­ation in Russia’s Far East.

The plans and funding for the Trans-Siberian Railway, to connect St Petersburg with the Pacific port of Vladivostok, were approved by Tsar Alexander III and launched by his son in 1889. The Imperial State Budget spent a fortune during the construction years, 1891-1913. The route started in St Peters­burg, via Moscow, Omsk, Novosib­irsk, Irk­utsk, Khabarovsk in southern Siberia to Vladiv­ostok. At 9,259 ks, the journey spanned 7 time zones and took c6.5 days.
In 1850, professional theatre history began when an itinerant acting troupe remained in Irkutsk. The first per­formances were staged in the Noble Assembly building, and soon expanded. In 1857 Irk­utsk Theatre hosted the All-Russian prem­iere of a Alexander Ost­rovsky comedy, then other plays. By 1897, the new theatre building was impressive. 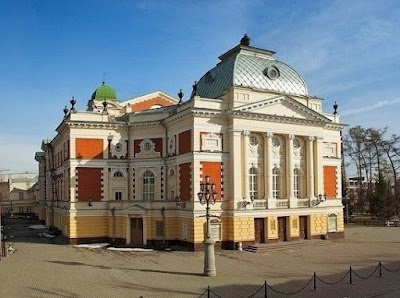 Drama Theatre
Since Siberia was not inside the Pale of Settlement which was created in 1794, how did Jews arrive in Irkutsk? Some got perm­ission to move over the Ural Mountains, as convicts or exiles but Tsar Nich­ol­as 1 (1825–55) opposed them.

When political prisoners became involved in growing rev­ol­ut­ionary move­ments, the flow of Jews to Sib­eria increased. And Irkutsk wel­comed the Jews who had completed their military serv­ice i.e the Jewish-cantonists i.e underage sons of Russian consc­ripts who were educated in special Canton schools (ab­olished 1857) for future military serv­ice.

In 1860 merchant YS Dom­browski bought an old house, for a community centre and school. The Irkutsk authorities allowed a mod­est wooden syn­ag­og­ue in Ap 1878 where the labour was pro­vided by for­mer sol­diers. The first service was attended by the Governor Gen­er­al. One of the oldest and most prest­ig­ious commun­it­ies in the Russian Feder­at­ion, Irkutsk also had a Jewish college at the synag­ogue, a prof­ess­ional choir and a lib­rary. 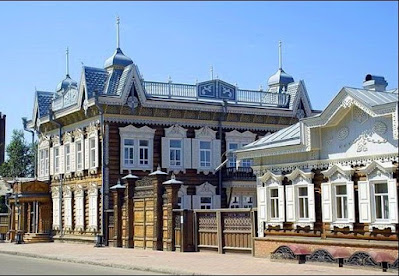 Timber houses with decorated exteriors
Locals lived in simple structures, until a fire in 1879 de­st­royed 80% of Irkutsk’s cent­ral area. The town was rebuilt quick­ly, with bright­ly painted shutters and houses decorated with wooden lace­work. Irkutsk’s recov­ery was aided by the Trans Siberian Railway coming in 1898. This lovely city is loc­ated on Angara River, outflow of Sacred Lake Baikal, the deep­est freshwater lake anywhere. The 60 ks rail link from Irk­ut­sk to Lake Baik­al was comp­leted in 1899.

From 1899-1902 merchant I.M Feinberg constructed a fancy two-storey stone house with architect A Kuznetsov. The many tenants over the years have included Circum-Baikal Rail­way, the Irkutsk military and Regional Con­sumer's Ass­oc­iat­ion. Later the second floor of the Feinberg House became the Irkutsk Regional Mus­eum. 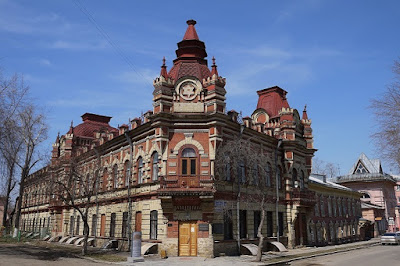 Feinberg House, later Irkutsk Regional Mus­eum
After defeat in the 1904-5 Russian-Japanese War, when Russia clear­ly wanted to keep the Empire’s vast eastern lands, they had to improve the railways. Irkutsk’s railway-station, opened 1906, was stunning. Ir­kutsk was becoming an important indust­rial centre, shipping in gold and furs from the Lena goldfields. The first industry inside Irkutsk was a brick fact­ory, then ship-repairing, tim­b­er, mach­ine tools, oil refining and hydroelectricity. The merchants played a prominent role in the region’s light in­dustries: soap, yeast and paints. And there were craft­s­men who trained in their own school: tail­ors, shoe­mak­ers, jewellers, locksmiths and watchmakers.

The exiled political prisoners came from different pol­it­ical move­ments: Bundists, Socialist-Revolutionaries, Bolsheviks, Mensheviks and Zionist Socialists, so Sib­eria became a centre of Zionist polit­ical act­iv­ity. The 1st Con­gress of the Zionists of Siberia in 1903 in Tomsk was attended by rep­res­ent­atives from 13 Siberian com­m­unit­ies. And the Bund representatives of Siberia held their con­fer­ences in Irkutsk during 1917-22. 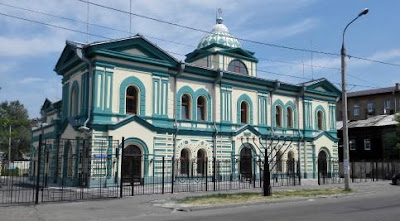 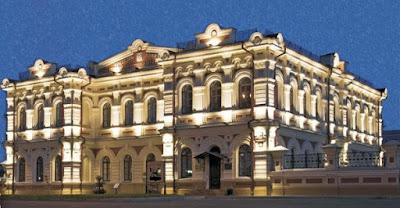 Memorial Museum of the Dec­emb­rists
Irkutsk State University was founded in Oct 1918. It became a large scientific and educational institution, training 14,500 students in human­it­ies, natural, technical and applied sciences in 11 facult­ies. And after the 1917 revolution, the city also built agricul­tur­al, medical and technical tert­iary instit­ut­ions, and libraries.

After 1923, many of Irkutsk’s religious institutions were closed, including the synagogue and the old cem­etery. In 1926 the Irkutsk monastery was also closed and used for war industries. In 1945, the Znamensky Cathedral was returned to the Ch­urch again. The monastery was revived recently, but only the chur­ch and gates had survived.
Irkutsk (pop 625,000), the Paris of Siberia, is still full of old chur­ch­es. And it’s a city of museums, literature and science. Photo credits: Tripsib 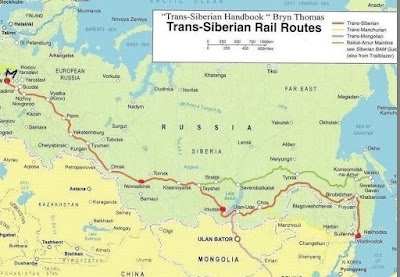 Trans Siberian Train Route
from Moscow in the west to Vladivostok in the east.
Posted by Hels at 5.12.20

Hello Hels, Irkutsk has a unity of architecture that must make the city a pleasant place to stroll around--at least on days suitable for walking. I looked at a few articles about the city, which is not noted for its pleasant climate, although they seemed to find a few nice days to take the pictures. I read that the interesting 19th century British blind traveler and writer James Holman made his Russian journey as far as Irkutsk, but was ordered out of the country on suspicion of his being a spy. Suspicion of everyone seems to be a Russian characteristic.
--Jim

The Trans Siberian Railway must have had a huge influence on both Europe and Asia. It seems like Irkutsk is still a very important city.

Epiphany Cathedral looks spectacularly lush and over-the-top inside, as you might expect, but quite unusual on the exterior. I have not seen another cathedral like it.

so many cities had beautiful architecture that was later destroyed by war bombing, fire, invasions, pandemics or careless modernists who torn everything down. Irkutsk was well planned and well protected.

if I had a choice, I would never live in a continental city... only a maritime climate has a chance of being not too hot in summer and not too cold in winter. Irkutsk's coldest season lasts Nov-Feb inclusive, with an average daily high temperature below -7°C. Snow is common for almost half a year :(

That said, the Germans found out about invading brutally cold Russian cities in winter during WW2. They regretted it bitterly (pun intended).

Irkutsk was never, and still isn't a very big city, but the arrival of the Trans-Siberian Railway made its location perfect. Had the railway been planned along a more northerly track, or planned to open 50 years later, I imagine Irkutsk would have remained a small, quaint town.

I love the interior but you are right... I have seen that glorious interior around the world. The interior’s walls and barrel vaulted ceiling are decorated with endless glittering mosaic tiles depicting religious figures. But the multi-tiered exterior was built in the style that became known as Siberian Baroque. The church and steeple are a traditional Russian Siberian architectural style while the adjacent bell tower is Neoclassical. So strange that the locals apparently call the exterior a gingerbread house.

well no doubt the climate will improve . I hear they are having summer days in Siberia which get into the high 30s. The melting of the permafrost is going to release an enormous amount of methane and Co2 so it will warm up everywhere including Irkutsk . I imagine living on the coast may become less attractive then !!
I just love the timber buildings of Russia. I imagine that it was a preferred option due to the huge timber resources and the limited time each year to quarry stone .Timber buildings would have been quicker to build too. Maybe in my next life I will get to Irkutsk . Thanks for taking us there in my current one Hels.

Thank you for the reminder :) Climate change deniers drive me nuts, but wouldn't it be ironic if some parts of the world were actually happy with their warmer weather.

The wooden architecture was very sensible. Firstly the timber was readily available and relatively cheap. And also the buildings were made from large logs, which guaranteed great insulation, security from thieves and stability for the high roof. Fire was the only risk.

I liked the tourist page that told the following story. Irkutsk has assets to work with that many cities around the world can only dream of – beautiful Lake Baikal nearby, the Trans-Siberian Railway, an interesting history and museum base, a linguistic university and rural Russian hospitality in a urban setting. That doesn't mean that the protected architecture will remain protected forever - capitalists can destroy a building in a heartbeat and build up something new in its place.