In 2018 Italy’s far-right Lega party pledged to convert the Casa del Fascio, a former Fascist party head quarters in Como, into a mus­eum. Before I have a heart-attack about a public celebration of Fascism, I thought I better examine the history and architecture of the building in detail.

Fascism’s effort to establish a new society was a hallmark of the regime’s engagement with modernism. So the party’s head-office was the primary institution through which Fascists altered the attitudes of its citizens. The facility thus advanced the party’s objectives and clarified Fascism’s central place in creating a modern urban landscape. Benito Muss­olini (and Adolf Hit­ler) utilised the new style of symmetrical and stark architecture to unify their citizens, mark a new era of nationalist culture and exhibit the meaning of absolute rule. 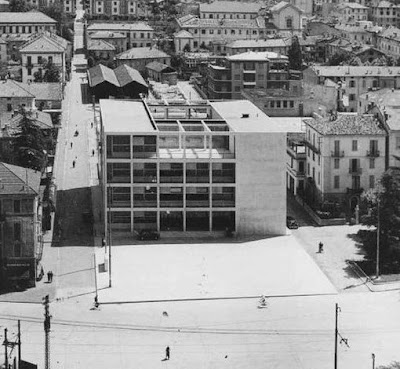 Casa del Fascio, Como
sitting in the centre of a medieval town 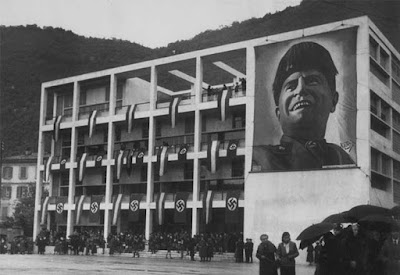 The white space on the right facade of Casa del Fascio
was used to add giant, changing photos of Mussolini

Giuseppe Terragni (1904-43) was born into a significant family in Como. His brother became the Fascist mayor of Como. The young Fascist arch­itect’s chief patron was Mussolini's mistress and cultural adviser Margherita Sarfatti, or other influen­t­ial Fascist party family members.

So it is not a surprise that Terrag­ni's abstract architectural language spec­if­ically embodied some­thing significant about the Fascist period. Even if the architect had not been a Fascist himself, he would still have wanted his patrons to love his work.

Built from 1932 to 1936 under the regime of Benito Muss­o­l­­ini, Casa del Fascio on beautiful Lake Como was to be a temple to Fas­cism. The building was designed by Italian rationalist arch­itect Giuseppe Terragni, and built in front of the city’s cathedral, domestic and commercial buildings, railway lines and roads. Looking somewhat like a regular urban villa, Casa del Fascio nonetheless had a very public role to play. As the seat of the local branch of the Nat­ion­al Fascist Party, this municipal admin­istration building was seen as an elegant site for mass Fascist rallies.

This International Style work appeared as a half-cube, 33m in plan and 17m in height. There was a strong sense of weightlessness, con­trol and precision about the building's form that could immed­iately be revealed by light. The plan used a double-height covered court, a space at its core. The transparency and light was a direct ef­f­ect of the missing upper floor, but high ceilings were in any case com­m­on in this region and cross ventilation made these tall spaces cool in summer. Each facade was differ­ent.

Terragni’s use of elegant and durable marble surfaces was called Renaissance Rationalism. And his love of glass could be seen in the large glass doors that opened to the piazza and in the atrium inside. Apparently transparency was a metaphor for the Casa del Fascio that Terragni proudly attributed to Mussolini. Il Duce declared that “Fascism was a glass house” and in architectural terms, this meant clarity and honesty in construction. The building was of course lacking in the neoclassical fripperies (that dis­guised the essential nature of the Nazi architecture). Mussolini loved the building and became a vocal champion of modernist Italian architecture.

Inside, the glass atrium was fres­coed in the main conference room with abstract paintings by local artist Mario Radice. There was also a marble statue of Mussolini in that spacious room. On the outside, Terragni wanted to use the white space on the right of the building facade to add giant, changing photos of Mussolini.

Note that by completion, Casa del Fascia was very different from every other piece of architecture in the area. It was white, mod­ern, stark and severe. So either the architect did not care that the Casa stood out like a sore thumb, or he proposed demolishing (perhaps at some future date) the entire medieval centre of Como.

Terragni was conscripted in 1939. Wounded on the Rus­s­ian Front when the Italian army collapsed near Stalingrad, he returned home in 1943 and renounced the Fas­c­ism he'd believed in earlier. Terragni went mad, spent his last days in Como streets and died at 39. His career was very short. 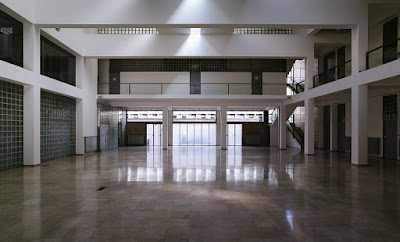 Every physical detail & spatial relationship inside was invested with political symbolism.
Built from 1932 to 1936 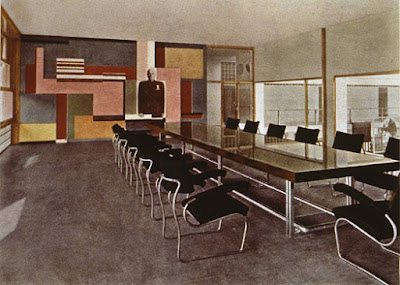 The problem for me is that I love this building that was built for Fascists. No amount of architectural modernisation and rehabilit­ation can get around this truth. But perhaps it doesn’t matter.

The Art Newspaper reported that Italy’s far-right Lega Party, which won almost 18% of the vote in the March 2018 general election and  went on to form part of the next coalition government, had plans to turn a former Fascist party head-quarters in Como into northern Italy’s biggest museum of Modern Art, Architecture and Design. The surprising pledge appears in the anti-immigration, Eurosceptic manifesto of Lega’s leader, Matteo Salvini, who has transformed the former northern separatists into Italy’s leading right-wing party. Lega Party may even apply for the site to gain UNESCO World Heritage status. But it is not clear from the Art Newspaper report if a new Casa del Fascio Museum will celebrate Fascist history in Italy or not.

This is new to me. Imagine if he had succeeded in wrecking the whole mediaeval town! To be honest, I don’t find the building attractive. Sorry!

Hello Hels, I agree that the Casa del Fascio has its attractions, although I don't know if they removed a mediaeval building in a mediaeval context in order to build it. Also, the prospect of losing more old buildings for more Fascist architecture is not too appealing. I think we are getting back in the territory of admiring an artist's philosophy or life versus admiring his work.

This happens all the time in architecture. I still feel strange about much ante-bellum plantation architecture in the American South, as beautiful as some of it is by independent criteria. Also, many of the pictures I collect show beautiful (and now historic) houses built by people whom I would abhor, and who in turn would probably not have had anything to do with me! Still, they had nice houses.
--Jim

New to me too. I have been to Italy many times in the past, but the politics have changed in the last 4 years and I have been caught unprepared.

You are correct about not everyone liking the modern architecture. I will change that straight away.

Nod. _Celebrating_ foul parts of all our national histories would be an abomination. Fascism was finally defeated and hopefully will never breath oxygen again.

But equally, immoral history must not be whitewashed out of our school and university text books. The trick today, in a n increasing right wing world, is to clarify Fascism's racism and genocide.

I have always acknowledged your point about judging an artist by his output rather than judging him by his behaviour. That is equally true for a painting, a book or a silk rug.

But a giant institution, in the centre of a modern city, is far more than a statement of personal artistic taste. I think it is more a blatant statement of political power.

This appears to be dissimilar to the Nazi architecture in Berlin, which seemed to me to be based on a Grand Roman Empire style. Equally brutal I suppose. I do agree with the point that Jim makes but for some of us it is difficult to admire any fascist architecture.
Modernist architecture is not a thing I admire much (unlike some of the painting).
Off on a tangent, while talking about Italian fascism, I saw a stage version of Captain Corelli's Mandolin in London this week. About as disappointing as the film and far below what the book achieved.
CLICK HERE for Bazza’s righteously rebarbative Blog ‘To Discover Ice’

We know that many powerful leaders wanted to make their mark on all sorts of places (other than Parliament and the military of course) eg they organised state orchestras to play their special music. But is it interesting that Benito Muss­olini did not choose elaborate, classical Roman architecture; instead he chose harsh, symmetrical architecture to mark HIS era of power and modern, nationalist culture.

If I had to guess, I would have guessed Mussolini liked reinforced concrete and steel, with a Brutal, functional feel. Wrong again!

this is interesting given the fascist attitude to modern degenerate art . It seems contradictory . One of my best memories of Berlin is visiting Templehof airfield ,I think was the first or very near the first airport ever built in the sense that we understand it now .It opened in 1923 band was redeveloped in the 1930s under Albert Speer. It is a very interesting place . The buildings are enormous and very imposing in an overbearing sort of way . The irony is that it is now a large refugee camp and the actual runways are a large community garden . I love that :)

Degenerate Art was a term designed by the Nazi Party to describe art that did not support the ideals of National Socialism. To be more specific, Degenerate Art was the decadent product of Bolshevik, Jew and modernist artists in Germany. But I am not sure that modern art was seen as problematic by the Fascist hierarchy in Italy.

Excellent that you saw the reconstructed design of the Tempelhof Airport. Yes it was typical of enormous and scary National Socialist architecture, but I am glad they didn't pull it down.

Hi Hels - well thank you for introducing us to this building and Terragni - poor chap ... dreadful end. If I ever get to Como - I will definitely look for it ... and wonder if the museum will ever come to fruition. Fascinating with the comments and your answers - cheers Hilary

it does not happen very often that we have a true dilemma between protecting heritage buildings on one hand, and not celebrating immoral epochs on the other. I would definitely protect the 1936 Olympic stadium in Berlin and the Prora-Rügen holiday camp on Germany's north coast, but what happens if rashes of swastikas appear all over the walls?