Marcel Mangel/Marceau (1923-2007), the legendary mime, was born in Strasbourg on the German border and raised in Lille until WW2. There he was introd­uced to music and theatre by his Pol­ish father, Charles Mang­el, who was a kosher butcher and a support­er of arts and mus­ic. His mother was Anne née Werzberg, from Ukraine.

Anne took young Marcel to a Char­lie Chaplin's movie, and he immediately decided to bec­ome a mime! Young Marcel, fluent in French, German and English, was also fond of art and literature. At the beginning of WW2, he had to hide his Jewish origin when his family was forced to flee their home. Marcel and his brother, Alain, both joined the French Resistance, and assumed false identities. He changed his name to Marceau, to honour a famous Napoleonic general.

Inside the French Resistance, Marceau posed as a Boy Scout director and evacuated a Jewish orphanage, children who had lost their parents in the deportations. He first convinced the children in eastern Fran­ce that they were going on a hiking vacation in the Alps. Then he guided them to safety in Switzerland. During the dangerous trip, he charmed the children with silent pantomime and they adored him.

Marceau’s talent of mimicry also may have saved his own life during the war, when he ran into a unit of 30 German soldiers. The mimic pretended to be an advance guard of a larger French force and con­vinced the Germans to retreat. Alas Marcel couldn’t save his fat­her. The Vichy police came and deported him to Auschwitz, where he died. 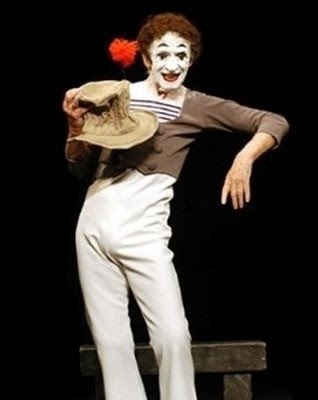 After Aug 1944, when Paris was liberated, his first big show was in an army tent for 3,000 American soldiers. And as he spoke three languages fluently, he served as a liaison officer with General Patton. Marceau also serv­ed as interp­reter for the Free French Forces under General Charles de Gaulle, acting as liaison officer with the allied armies.

Marceau had always dreamed of becoming a painter and was educated in an art school in Limoges. Even at 19 he felt his profession was painting and that mime was his hobby. Nonetheless Marceau decided that he would “make theatre without speaking.” It made sense; France had long had a strong mime tradition. In 1946, he enrolled as a student in Charles Dullin's School of Dramatic Art at the Sarah Bern­­hardt Theatre in Paris. There his great mime teacher was Etienne Decroux, whose partner Jean-Louis Barrault cast Marcel Marceau in the role as the clown Pierrot.

In 1947, blending the gestures of the clown Pierrot, Charlie Chaplin, Buster Keaton and the Marx Brothers, Marceau created his most famous mime character, Bip, a white-faced clown with a tall, battered opera hat, striped jersey and a red flower. A solitary figure on stage under a spotlight, his white face below the battered hat flickered between emotions as if someone was controlling his masked face. The act seemed to take itself so seriously as to be ridiculous. But the audience believed it.

He had to bring hope to people who had struggled. Marceau alluded to his character’s dark origins, saying the people who came back from the concentration camps were never able to talk about it. Perhaps that unconscious­ly contrib­uted towards his choice of silence. You see the pain and the sadness in his mime skits, the origin of the pain being the deportat­ion of his father.

Marceau’s Bip increased the appreciation of mime outside France. Marcel shone in a range of characters, from an innoc­ent child, to a peevish waiter, to a lion tamer and an old woman, and became acknowledged as one of the world's finest mimes. He could show a meta­morph­osis of an entire human life, in just a couple of minutes, from birth to death. Marcel’s classic silent works included satires on artists, sculptors, matad­ors, works of genius. Marceau also played several silent film roles.

In the early 1950s, Laurel & Hardy were doing a world tour and, while playing in Paris, they were told that Marceau was doing incredible mime in a minor sub­urban theatre. They went to see him and loved his work. A few days later, instead of doing the second half of their own show, Laurel & Hardy introduced Marceau, walked offstage and gave the rest of their programme over to the Frenchman.

After performing in Jean Louis-Barrault's troupe, Marceau set up his own company, and staged 26 dramas. He received no subsidy, so he had to raise the funds for his prod­uct­ions by internat­ional tours. He have given performances on all five continents, with particular success in the USA and Japan, and appeared many times on tv. 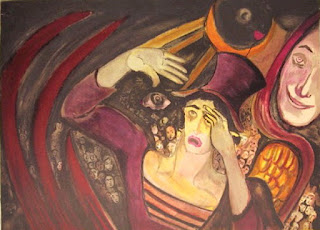 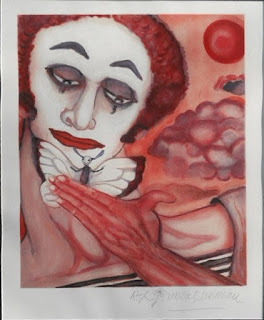 Marceau asked the French authorities to help him prevent the art of mime from disap­p­earing. He received a subsidy from the City of Paris and he was able to set up his own Marcel Marceau International School of Mime and Drama in Paris in 1959, which pro­vided training courses in dance, fen­cing, acrobatics and drama, and was attended by students from many countries. Later he also opened the Marceau Foundation to promote pantomime in the USA.

His Art of Silence filled a remarkable acting career that lasted 60+ years. Finally he lived on a farm in Cahors, near Toulouse, where he continued his daily routine to stay in good form and continued coaching his students.

Marcel Marceau died in Sept 2007. His burial cer­emony, in Pere Lachaise Cemetery Paris, was accompanied by Moz­art and JC Bach music. Marceau's costumes and belongings were sold for $700,000 at a Paris auction, including his famous top hat, sailor suit, paintings & art objects. Part of the profits paid off Marcel's debts left after his death and many of the objects were acquired by the National Library.

Absolutely fascinating - I had no idea. Someone should make a film about his life.

I miss your lectures. Come back.

I wonder if MM was old enough to see silent films, before they ended in 1930. Silent films stars like Charlie Chaplin had to be very clever mimes.

Hello Hels, Although not a fan of mime, I found this account fascinating. I did not know of Marceau's background, and what he went through makes symbolic sense of his artistic career.
--Jim

your timing is immaculate! "Resistance" is a biographical drama, based on the life of Marcel Marceau, that will be finished in 2019. Out of Marceau's long and creative life, the film will focus on the young man’s commitment to the Resistance in Occupied France.

thank you :) Mime was an art form that had been popular since the Ancient Greeks. But in Marcel Marceau's time, the most important names would have been film stars working at the end of the Silent Era, as you noted. Silent film comedians like Charlie Chaplin, Harold Lloyd, Buster Keaton, Jacques Tati and others must have been role models for the young man.

The peak of modern mime, or the Art of Silence, was reached in France, where its practice is said to have peaked with Étienne Decroux, Jean-Louis Barrault and Marcel Marceau. In the silence, the art of expressing feelings was by attitudes; it was not a means of expressing words through gestures. So although I too was never a huge fan of mime, it certainly was a very specific art form that most artists could not star in.

Until Marcel Marceau was awarded the Raoul Wallenberg Medal for humanitarianism, most people didn't know about his heroism during the war. Unfortunately it was not awarded until he was elderly, depriving him of decades of honour.

I believe Marcel chose not to seek publicity for what he had done in the war - like so many other heroes of that time.
CLICK HERE for Bazza’s ultimately unthinkable Blog ‘To Discover Ice’

Everyone my age would know of Marcel Marceau, but probably like me know very little about him. What a great person.

that is so often true. Here is another fascinating fact. Marcel Marceau's first cousin Georges Loinger was already involved in the French Resistance and encouraged the much younger Marceau to join up. Georges Loinger saved hundreds of French Jewish children during the war, also slipping them across the Swiss border. Loinger appropriately won every honour the French had to give to their Resistance fighters eg Croix de Guerre and Legion of Honour.

that reminds me. We didn't know about Sir Nicholas Winton's wartime heroism either, until he was knighted as a very elderly man. In fact modesty prevented Sir Nicholas from even telling his OWN wife about his war-time heroics, until he was in his 90s.

In some cases, some heroes paid a terrible price for saving Jewish lives during WW2. Chiune Sugihara had a high status Japanese government consul job in Lithuania. When he got back to Japan after the war, he lost his foreign office job, his income and was sent into exile.

There are 7.5 billion people on earth this week, 99.999999999% of them totally unknown to anyone but their family. It was easiest for individuals to become famous for being a top sportsman, film star, royal, mass murderer, head of a technology empire etc etc. But how many artists, scientists, performers and architects do we still remember, 50-100-250 years after their careers? Go Marcel Marceau!

Thanks, Hels, a fascinating life! I confess I hadn’t known all of this. Wonderful!

Hi Hels - I certainly didn't know all the background about his life ... this was/is fascinating to be made aware of. Love the bit about Laurel and Hardy giving him half their show the one night. What a talented man - so so interesting. Thank you - Hilary

Some performers (in all sorts of arts and science) were big on self-advertising and some seemed extremely modest. I think there is more to reveal about Marcel Marceau.

the Laurel and Hardy story is literally true. That showed us, I believe, that the comedy duo recognised rare and special talent when they saw it.