A very special parliamentary building - the Bundestag in Berlin

When a large parliamentary building was required in Berlin, the Reichstag building was proposed and debated. The fights bet­ween Otto von Bis­marck and Reichstag mem­bers delayed construction so an architectural contest was held. The winner, Frank­furt arch­itect Paul Wallot, was asked to design a building in the Italian High Renaissance style that would feat­ure a very large dome. In June 1884 the foundation stone for the building was laid and ten years later, the build­ing was complete. Located on Platz der Republik, along the Spree River just north of Brandenburg Gate, the Reichstag had four 40-meters-high towers.

After it opened in 1894, the Reichstag building housed the German Parl­iament. But in Feb 1933, the dome was ruined along with the rest of the building in a fire. Despite there being lit­tle evidence to blame anyone in particular, it was blamed on the Communists. The remains and the dome were further demolished with the bombings of Berlin through WW2 and the eventual liberation of Berlin by the Soviets in 1945.

With the new Constitution of 1949, the Bundestag was established as the new West German parliament in Bonn.

The Bundestag/Lower House decided to rebuild the Reichstag building in Berlin, this time without a dome; the original had been demolished in 1954 as structurally unsound. The decorative figures that had been dest­royed were not restored, and the façade was simplified. While the Reichstag was part­ially reconstructed in the 1960s as a conference centre, the dome was not. Renovations to the building were carried out according to plans by Paul Baumgarten and were completed in 1972. 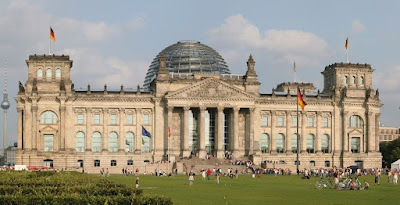 The Reichstag in Berlin
transformed by Norman Foster from 1993

With the reunification of Germany and the decision to move the cap­ital from Bonn back to Berlin, it was decided that the old Reich­stag building should be re-built along with a new dome that emphas­ised a unified Germany. The transparent design of the Reichstag dome was intended to symbolise Berlin's attempt to move away from a past of Nazism and turn instead towards a united, democratic Germany.

The Reichstag in Berlin was the site of German reunification cerem­onies in Oct 1990. British architect Sir Norman Foster was commis­s­ioned in 1992 to trans­form the renovated C19th building into the new home of a unified German Parliament. Foster began to rebuild the Reichstag in 1993, focusing on the glass dome that was constructed on top. The distinct­ive app­earance of the new dome, which derives from a 1988 design by Gott­fried Böhm, has made it a prominent landmark in Berlin.

Foster’s Reichstag was deliberately intended to be viewed from above. His brilliant gleaming glass and metal dome directly overlooked the debating chamber for the Bunde­stag, all­ow­ing the German people to watch their Govern­ment’s Parliamentary proceedings down below. Citizens were now democ­ratic and "above government", as opposed to how German society had existed under National Social­ism. 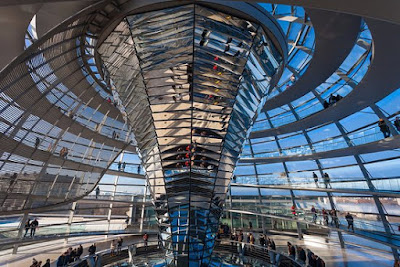 Inside the glass dome
Note the inverted cone of mirrors in the mid­dle, and the spiralling ramps. 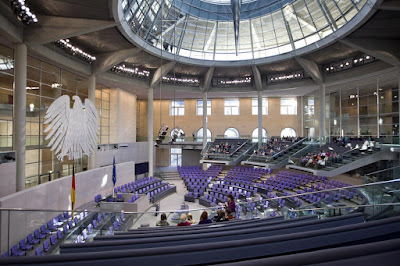 The Bundestag today, flooded with natural light
In the absence of the 709 Parliamentarians, guides can take tourists around the building.

The dome is open to the public and the roof terrace above can be reached by climbing two steel, spiralling, double-helix-type ramps. The dome thus works as a viewing platform with clear panels, from which the public could view the entire city. In fact the 360° view of the surrounding Berlin cityscape includes both East and West.

The glass dome was specifically designed by Foster to be environ­ment­ally friendly. He wrote that the cupola is both a generative element in the internal workings of the building and a key component in our light & energy saving strategies. It communicates the themes of lightness, transparency, permeability and public access that underscore the project.

A skylight, with a significant inverted cone of mirrors in the mid­dle of the opening of the dome, directs sun­light into the building and draws light into the plenary chamber. A large sun shield tracks the movement of the sun electr­on­ically and blocks direct sunlight, thus effectively decreasing the carbon emis­sions of the building.

Foster was awarded the Pritzker Prize in 1999 for his work on the building, which has become one of the top tourist destinations in Berlin. It is known for sleek, mod­ern designs of steel and glass, an innovative archit­ectural dome design that was described as a sculpture of light. 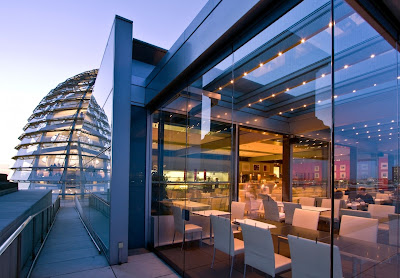 The architect’s final task was to design a restaurant that is pub­licly accessible all year round in the national parliament build­ing. The exterior of this rooftop restaurant is a big box, placed on the Reichstag’s eastern wing next to the crowning glass dome. And the restaurant’s interior is simple. But the views east across the German capital are amazing and the food is rich and very inter­esting eg the beer-and-sausage Bavarian breakfast. Reservations and security checks are essential! Is the German Bundestag the only parliament building in the world to include a fine public restaurant?

The German Bundesrat is the Upper House legislative body that represents the sixteen federated states of Germany at the national level. The Bundesrat meets in a separate Berlin building.

Hello Hels, A happy ending for a building with a troubled past. The metaphor of transparency is one that certainly could be adopted on a larger scale!

You mention the "decorative figures" that had been destroyed. One wonders about the huge number of sculptural fragments from buildings destroyed in the wars, fires, and other causes of attrition. Unless reduced literally to smithereens, most of these must be extant in some way, even if buried in landfills, like the many fragments that have survived from antiquity. I wonder of this type of architectural salvage is prevalent in Europe? It seems a resource that would be imbued with extra meaning by the recent, indeed sometimes living, memories with which they are infused.
--Jim

Strangers' Dining Room in London's Parliament House was opened to the public in 2017. Expensive food but splendid decoration.

Parliament House in Victoria has a restaurant that is open to the public, but only when Parliament is not sitting. Strangers' Corridor looks elegant.

Hi Hels - what a great article on the transformation of the damaged building to today's Parliament. Love the idea of it being available for the public to view ... thanks so much for letting us know the details of this - cheers Hilary

I love the idea of transparency and illumination as well. Symbolically, and also in practice. Actually I think the special design of the buildings has as much to do with energy generation and supply, but that is also important!

Every time the building was renovated or rebuilt, I imagine the architects were asked to incorporate elements from past incarnations, but that the focus should be on contemporary politics and culture. So the latest incarnation had to create a parliamentary building that was a symbol of modern German democracy but with no sign of Germany's imperial past, two world wars and Nazism.

oops thank you. Clearly the German Bundestag is not the only parliament building in the world to include a fine public restaurant. The Parliamentary Dining Room in British Columbia is open to the public every weekday for breakfast and lunch. In Quebec, Le Parlementaire is a handsome beaux arts dining room once reserved for MNAs, but for decades now its has been open to the public. Etc etc

I really love Berlin . There is a friendly informal vibe and a thoughtfulness to the modern architecture and the memorials which have been built there . In some strange way it reminds me a little of Melbourne but Melbourne doesn't have the burden of all that history . Its a really wonderful city and very livable . I hope it stays that way .

agreed 100%. Last time we were there, we had 8 days to explore Berlin and surrounding areas, and still wanted to stay longer.

Since my brother in law was from Leipzig, we also wanted to see his beloved classical music, architecture and fine arts.

A very interesting building. While it is not Vienna, Prague or Budapest, I think Berlin would be an interesting city to visit. We experienced German beer and sausages for breakfast in Germany. There wasn't too much special about either.

There are few cities I am passionate about, but you have picked most of them in one sentence - starting with Vienna, Berlin and Prague!

Re the beer and sausages for breakfast. I don't eat meat ever, but people who do... really like "going local".

I think we should be grateful that the outer walls survived the fire and the war and for the 1960s restoration. I'm sure that otherwise the whole thing would have been rebuilt as a glass and concrete monstrosity (cf new public buildings like the Scottish Parliament or City Hall in London). It's such a pity that modern architects have such a prejudice against classical, baroque and gothic styles and the use of stone.

It breaks my heart when beautiful, historic architecture is intentionally pulled down and replaced by ugly, modern buildings. Out and out vandalism! A gaolable offence!

But when the destruction was caused by war or fire, and some proportion of the building remains, there is every reason to restore the facility to its original design. In modern cities like Atlanta, that may not matter. But in medieval and early modern cities like Prague, it does matter.

Very interesting to read your post and see your pictures and thanks for commenting on mine. I wish I had felt like going to that restaurant, but actually it was so hot all I wanted was an icecream! In that heat I felt that the cooling system was less than perfect, eco friendly though it was, I might have been happier with a full on fridge-type a/c!!!!!

my best time of year for travelling to Europe is during our winter holidays when the tertiary institutions close for 4-6 weeks - last half of June and all of July. I KNOW it is going to be hot but I was caught out only once. My suitcase went to Manchester instead of Malta and I was wearing winter clothes in 42c heat :(

In 1841, Kaiser Frederick Wilhelm IV of Prussia put into motion his plans for a ‘sanctuary for art and science’ on a small island in the river Spree. He commissioned Friedrich August Stüler to design two grand museums – the Neues museum and the Alte Nationalgalerie – to join the existing Altes Museum. The Bode-Museum and the Perganonmuseum arrived later, in 1904 and 1930 respectively. Together, the buildings of Museum Island in Berlin stand as a symbol of national identity and self-confidence. So it will be interesting to see in 2019 how David Chipperfield’s addition – the James-Simon-Galerie, a colonnaded entranceway that links the five historic institutions together – will complement the Kaiser’s vision.

Many thanks. I think a trip to the River Spree is going to be even more impressive!