Dutch artist Vincent van Gogh (1853-1890) was known in art history as soc­ially isolated, mentally unstable and having an extremely emot­ion­al response to his environment. Growing up in his parents’ home at Etten in The Hague, van Gogh had taught himself to paint by copying prints and studying drawing manuals. His first aim was to master drawing in charcoal and in perspective, but in any case, he was totally reliant on his brother for financial sup­port. And as he died in his 30s, van Gogh enjoyed a very short career.


In April 2017, the National Gallery of Victoria will put on Van Gogh and the Seas­ons. After long negotiations with overseas mus­eums, this exhibition will feature works lent by international museums, includ­ing the van Gogh Museum Amsterdam, the Kröller-Müller Museum Otterlo, the Von der Heydt Museum Wuppertal and Triton Found­ation, all in The Netherlands, The National Gallery London and The Armand Hammer Museum of Art Los Angeles. Curated by the former Head of Collections at Amsterdam’s van Gogh Museum, the NGV will walk visitors through 50 works by van Gogh in four separate sections, each devoted to one of the four seasons. Additional documentary material, including works from Van Gogh’s own art coll­ection, will show his deep interest in literature and nature. 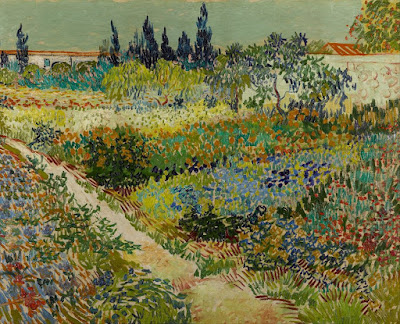 The seasons had great meaning for van Gogh, representing the circle of life within nature – birth, bloom, maturity and death that he represent­ed in his dramatic, expressive and colourful works. For Vincent, this ongoing cycle represented the greatness of nature. So he rep­eatedly painted scenes that richly evoked the sensory influences part­icular to each season: spring had bloss­oming orchards and flowering meadows; summer had fields of ripe wheat shimmering under the hot sun; autumn gave abundant harvests; and winter depicted with peasants digging potatoes out of frozen fields, or sharing miserable meals. Seeing a van Gogh up close will be an exciting first for many Australians.

During a critical two-year (1886-1888) stay in Paris, van Gogh met Impressionists, saw their works and particularly loved Paul Seurat’s experimental brushwork and Paul Gauguin’s colours. The Melbourne exhibition includes works that depicted places in the Netherlands that were the setting for the critical events in the artist’s chaotic life eg the Dutch region of Brabant, where van Gogh was born and raised. But it also includes the paintings from France done in the late 1880s eg Arles, where the artist exper­ien­ced his greatest creativity; Saint-Rémy de Provence, where he was treated for mental illness in an asylum; and Auvers-sur-Oise, where van Gogh committed suicide in 1890.

I am assuming that being in Arles in 1888 had a significance for the artist; it was from Provence's nature that all of his strongest colours evolved. Think of brilliant van Gogh sunshine and the earthy, fertile, sun-baked Provencal region of France everyone loves. This was where van Gogh best discovered that colour was a perfect expression of a love of nature. Even his letters, written in Arles, expressed colour verbally “my house here is painted out in fresh butter yellow, with raw-green shutters, and it sits full in the sun on the square where there is a green garden, plane trees, pink laurels, acacias. Inside its completely white-washed and the floor is red brick. And the intense blue sky above!’ 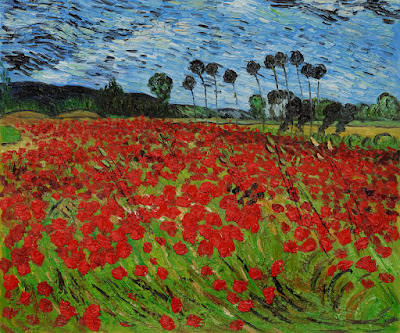 
In all the world’s art galleries and private collections, there are only 800 paintings signed by Vincent van Gogh. Yet even that was a remark­able achievement as van Gogh suffered from depression and died when he was only 37 years old! So his life’s work was basically produced in only a decade, the last three years of his life proving the most product­ive. This was when his observations of the seasonal changes within the natural world were most profound.

In one sense Vincent van Gogh’s letters to Theo suggested the artist was a rel­ig­ious man who saw the hand of God everywhere in nature. But did he believe these seasons were like the cycles of life: birth, youth, maturity and old age were like spring, summer, autumn and winter? And did he find spirituality in changing moods and colours of the seasons? NGV curator Ted Gott said yes: it was the linkage to emotion, vigorous brushstroke and religious expression of colour that made van Gogh a unique artist. The viewer can see the energy and dynamism of the artist’s distinct brushstrokes, which almost leap off the canvas with vitality.

I have problems with this analysis. Firstly I am not at all sure that Vincent saw himself as a religious man, at least in the trad­it­ional sense. And secondly will Australians be as aware of the changing seasons as residents in the Netherlands are? Of course I know we swim in summer and put a jumper on in winter, but even our evergreen trees look unchanged throughout the year. And if an Australian viewer has never seen snow, can he “find snow beautiful and burning sun beautiful etc”, as Vincent wrote with excitement? 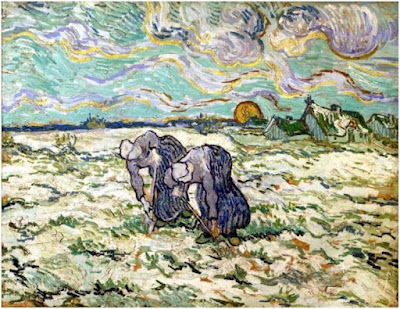 In the end, it didn’t matter. During the final van Gogh era, 1888–1890, his paintings were on show at the Salon des Indépendants in Paris where they attracted attention. And in 1890, his works were exhibited in Brussels, with some success. So when van Gogh assessed his artistic legacy as of only secondary import­ance in 1880, despite his works having begun to attract critical attention, perhaps he was being unduly modest. Or perhaps he was too depressed to appreciate it all.

It is difficult for modern viewers to understand how hard he struggled to earn a living from his passionate art. Already, during the first decade after his death, Vincent van Gogh’s name had become integral to the modern world as he inspired the next gener­at­ion. I can only hope the Fauvists, artists who redefined pure colour and form as means of communicating the artist's emotional state, thanked van Gogh properly.

van Gogh and the Seasons, the NGV's Winter Masterpieces season, will run from Apr 28-Jul 9, 2017. See the NGV's home page for the some of the paintings. The exhibition bookshop is selling an excellent catalogue and a children’s publication.

Many thanks to Carolyn McDowall, The Culture Concept Circle, 2016, and to Urban Melbourne.

We did not examine Van Gogh's paintings seasonally, in class, but it makes me wonder. Could the artist have suffered from some sort of seasonal affective disorder?

I don't think we will ever understand the nature of van Gogh's depressive illness, whether it was manic depressive bipolarism, perhaps combined with epileptic fits, suicidal thoughts or alcoholism. But his winter scenes do seem particularly bleak, don't they? He wouldn't be the first Dutchman to go into a reactive depression in the cold, snowy weather.

Hello Hels, People who live in temperate climates really feel the power of the seasons. Although cycle-of-life interpretations make a convenient literary metaphor, I think that people who really get out understand the seasons in a more complex way. Life, death and continuity are perpetually present--the spring flowers fade and die quickly, and life is abundant in winter with underground potatoes and roots, the buds on trees, etc. Perhaps dividing van Gogh's works into frank seasons is an oversimplification based on preconceptions. Either way, Australia is lucky to have such an important exhibition.
--Jim

I too am assuming that because the NGV only received a small proportion of the works ever painted by van Gogh, it is easier for the curators to display the art in four separate sections. Each room is being devoted to a convenient literary or visual metaphor, just as you say.

van Gogh's problems were insurmountable during his own lifetime. He was not confident about his own art skills nor did he believe anyone on the planet would ever buy one of his paintings. Finally his social life was non-existent, except for his heroic brother. So I am very grateful for any historical analysis that will help us understand his world. It looks like a terrific exhibition!

I imagine various big gallery curators trying to outdo each other's gross takings when they get these big shows on the road. The massive cost of security, mounting and packing means real money for the NGV in selling the catalogues and in packed food locations.

But oh those red poppies you've shown are so much more exciting than the IRISES that convicted fraudster Alan Bond infamously paid eleventy million for back in the 80's.
Poor Vincent, the most tortured of all tortured creatives.

They are not called Melbourne Winter Masterpieces for nothing. Each year a blockbuster extravaganza is arranged that is soooo compelling, people will avoid the winter rain and misery by spending time inside the NGV. So far, so good. The costs have been high but the outcomes have been worth the effort eg Titanic, The Dutch Masters, Vienna Art and Design, even Degas etc.

Forget Alan Bond. Feast your eyes on a real talent, even if he was a bit damaged.

I don't think I was aware how much van Gogh loved and was influenced by Japanese prints, until this exhibition opened (to gallery members). Just as well he later was more influenced by the post-Impressionists. Van Gogh suddenly learned to love colour, as the exhibition showed so well.

The catalogue is fantastic.

Have a look at The Virtual Victorian who wrote: Having just been to see the recent Van Gogh exhibition at Tate Britain, I was reminded of another one in 2010 when much of the artist's work was shown at the Royal Academy in London.