Marcel Breuer - modernist designer/architect in Germany, Britain and the USA

Marcel Breuer 1902-81 was born in Pecs, Hungary in 1902, son of a phys­ician. In 1920, when he was looking for a university, Breuer received a scholarship to study art in Vienna but disliked the Art Academy there. He started working in the studio of a Vien­nese archit­ect instead and soon became interested in cabinet making. In 1921 teenage Breuer departed for Bauhaus Academy in Germany.

Bauhaus combined teaching of the pure arts with training in modern funct­ional technology, exactly what Breuer wanted. He received a Bauhaus degree in 1924, then studied architecture in Paris and met Le Corbusier. In 1925, Bauhaus director/architect Walter Grop­ius enticed Breuer to return to Bauhaus (in Dessau), by offering him Young Master­ship of the furniture design workshop and a commission to design the int­eriors of the new Bauhaus buildings. 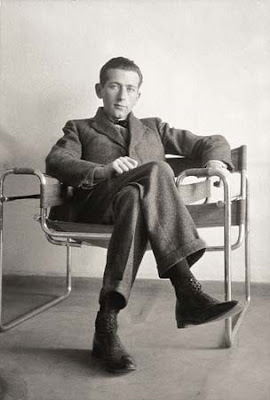 sitting in a Wassily Chair that he designed
late 1920s

Breuer and his textile-designer wife eventually left Bauhaus in 1926 to begin a private architecture prac­t­ice in Berlin, emphas­ising prefab­ric­ated housing and the use of conc­rete. In this time Breuer participated in a number of designs, including the Elberfeld hos­p­ital.

Breuer could already be described as one of the most influential furnit­ure designer of the C20th. But he had only had time to be the sole arch­it­ect on one private house before leaving Germany: the Harnisch­macher House in Wiesbaden 1932. Note its contrasting mat­erials and distinctive interiors.

Bauhaus was closed by the Nazis in 1933 and the graduates were banned from architecture because of their so-called Bolshevism. So Jewish Breuer emigrated to Britain in 1935.


British Isokon/Isometric Unit Construc­tion Control Co was originally established in Hampstead to make flats, houses and furn­iture. The owner Jack Pritchard and the designer Wells Coates shared a common fascination with the problems of city living in the modern age; both had met Le Corbusier. In 1932 Coates was asked to build a block of service flats in Lawn Rd, Nth London (op­ened 1934), to be fitted out to a standard plan, using Isokon designed furniture. Walter Gropius got to England in Oct 1934 and became Con­troller of Design for Isokon, living in one of the Lawn Road Flats.

Just before he left for the USA in March 1937, Gropius recommended his old Bauhaus mates Marcel Breuer and Lazlo Moholy-Nagy for on-going jobs with Isokon.

Mod­ernism in Britain was different from the Continent. Britons loved trad­it­ional not­ions of comfort and decoration, and the intell­ec­tual side of cos­mop­olitan modernism wasn’t trusted. No extreme metal furniture! So Breuer rejected the tubular steel objects he’d produced at the Bauhaus. At Isokon, he designed laminated plywood pieces of furniture.


The arrival of the Bauhaus teachers in the USA and their training of a new gen­er­ation of American students helped spread Bauhaus design prin­cip­les. In 1937, Breuer accep­ted a Gropius invitation to join the School of Design at Harvard University in Boston to teach architecture. Ludwig Mies van der Rohe went to the Illinois Instit­ute of Technology in Chic­ago.

Breuer also formed a part­nership with Gropius in Cambridge Mass from 1937-41. Their firm was engag­ed primarily in the design of private homes.

His hillside Breuer House in Lincoln Mass 1939 displayed the daring use of the cantilever. Breuer had been experim­ent­ing with using frame walls as truss-like members, and here this potential inherent in wood frame construction was exploited to the utmost. The building cantilevered from its whitewashed concrete base in four directions. 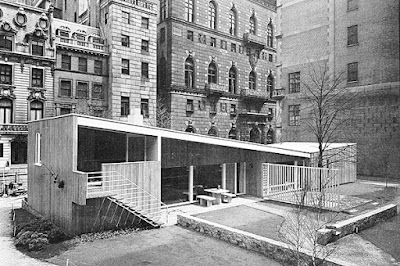 House in the Garden, 1949
outside Museum of Modern Art, New York
The architect was Marcel Breuer


In 1946 Breuer moved to NY to establish an office. The num­ber of commissions began to grow, and it was then he designed his own home in New Canaan Ct. He developed a design to meet the living requirements of modern families by creat­ing functional areas for separate activities.

Breuer's architectural reputation was greatly enhanced in 1953 when he and two others were commissioned to design the UNESCO World Head quarters in Paris. And in 1963-4 Breuer began work on what is perhaps his best-known project, the Whitney Museum of American Art in NY. Bec­ause the mus­eum was located on a very small corner site, the design had to max­im­ise space via concrete cantilevered upper floors and small framed windows. 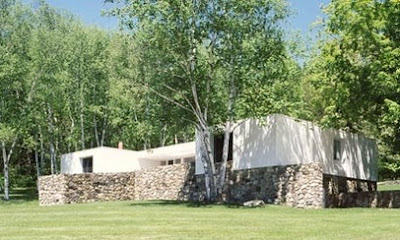 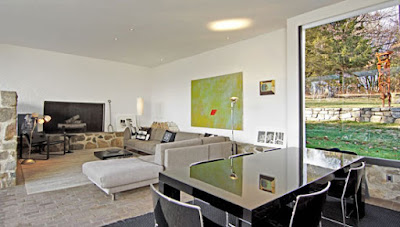 Stillman II, 1965
The architect was Marcel Breuer
Note how the expanses of glass connect the interior to the lawns and trees

Yet of all the important commissions coming to Marcel Breuer, I wanted to see the Stillman houses. In 1949 Rufus Stillman, CEO of a manufacturing company, saw the house that Breuer created outside NY’s Museum of Modern Art and decided that he had to have a Breuer home for his own family. From 1950 on, Breuer went on to design a number of Litchfield projects - Stillman I, II, and III - for that family.

Stillman II was designed in 1965 by Breuer to epitomise the perfect blend of art, design and luxury. Restored with great sensitivity towards its origins, Stillman II integrated every C21st comfort without affecting the spirit of Breuer's original mid-C20th vision.

Its floor plan, its efficient use of space, and the use of natural materials remain. Note the local stone that formed the foundation and which extended into the interior, patinated brick floors and white Mediterranean stucco walls. In combination with the posit­ioning of the house, 3.7 metre ceilings and vast expanses of glass, Breuer created a seamless connection between the interior and the surrounding landscape.

This 5 bedroom residence was located in a serene and natural 9.5 acre setting alongside an additional 37 acres protected by the beautiful Litchfield County Hills Ct land-trust. Amenities now include a canti­levered guest cube, fancy kitchen and butler's pantry, heated pool and attached garage with storage built-ins. Stillman II was and is an archit­ect­urally significant home that was built for form, function and comfort.

Breuer donated many of his professional papers and architectural plans to the Syracuse University library in the late 1960s. He died in 1981.

Hello Hels, Breuer designed the 1970-1 expansion of the Cleveland Museum of Art, in modern contrast to the neoclassical 1916 main building. His addition has been rather obscured by the recent huge expansion of the museum, which did borrow some of the Breuer elements. I hadn't known about the archive at Syracuse. Although Syracuse does hold many important archives, including that of photographer Margaret Bourke-White, I wonder what was Breuer's connect to Syracuse?
--Jim

I originally intended only to follow Breuer into the post-war era in the USA (late 1940s and early 1950s) because I assumed that would be the end of the influence of Bauhaus on his designs. Plus I know precious little about late 1950s and 1960s architecture in general. Yet his career went on and on, as you note yourself. I bet his mum and dad back in Pecs would have been surprised and delighted.

Syracuse Uni said that in the last decade they got a National Endowment for the Humanities grant to create the Marcel Breuer Digital Archive. The archive was a collaborative effort that included Bauhaus-Archiv Berlin, Stiftung Bauhaus Dessau, Harvard University etc. It already includes Breuer's work up until 1955, digitising 30,000+ drawings, photos and plans.

*agreed* you are by far the most intellectually aware and historically sensitive students of all :)

I am still very tired and breathless, but hopefully this will be the last semester of semi retirement. All going well, I will be back bright-eyed and bushy-tailed by the autumn term. In the meantime, this blog will continue to be my main engagement with history, art and architecture. And a conference paper that I gave in Sydney.

Interesting....I seem to always say that, but it was. It was quite predictable that he would not be a good fit in England, and more appreciated in the US.

The arrival of Bauhaus philosophy, designs and staff arrived in the USA in the 1930s, even before they knew what sort of reception they would get. An Institute of Design was established at the Illinois Institute of Technology, and was called the New Bauhaus. László Moholy-Nagy, one of my favourite Bauhaus teachers, was recruited to be the founder and director. Ludwig Mies van der Rohe, one of my favourite Bauhaus architects, headed up the University's Dept of Architecture.

Black Mountain College in North Carolina recruited the other amazing Bauhaus teachers to move to the USA to lecture, including my favourites Anni and Josef Albers, Xanti Schawinsky and Oskar Schlemmer. The only problem in the Illinois and North Carolina universities was that every ex-Bauhaus lecturer spoke English with a very strong German accent.