Ignacy Jan Paderewski (1860-1941) was born in Kurylowka, a Polish area that later became Russian and then Ukrainian. His father ran the estate of the local absentee landlords and may not have been wealthy himself. But father certainly had enough money to hire music tutors for the children.

Barely into his teens, Ignacy entered the Fryderyk Chopin University of Music in central Warsaw. He graduated well in 1878 and was immediately hired by the Conserv­atory to teach piano classes, and to compose for violin and piano. He befriended a prominent violinist, Wiadyslaw Gorski and his wife Helena, and teamed up with Gorski for concert tours.

In 1880 Paderewski married Antonina Korsak, a pianist. They were thrilled when their first baby was born, but grief stricken when Antonina died soon after. He composed a eulogy in her honour.

At 22, Paderewski moved to Berlin for four years to study composition. There his older friend and mentor, the Russian pianist and composer Anton Rubinstein (1829-1894), encouraged Ignacy to devote himself to the piano. The Pole did indeed move to Vienna in 1886, to master the piano. His studies in Vienna were funded by joint appearances with the famous stage actress Helena Modrzejewska.

Paderewski’s debut in Paris was in 1888. It was an instant success, as were his next tours of Paris and London. Even modernists would have loved his physical appearance – awesome long red hair, an enticing stage presence and fine facial features that particularly enchanted women. Especially me!!! Many musicians tried to emulate him, wearing the familiar top hat, long coat and long hair. Artists loved to paint his portrait, sitting at a piano like a Botticelli angel. British artists Burne-Jones and Alma Tadema created amazing portraits in London concerts, in 1890 and 1891. 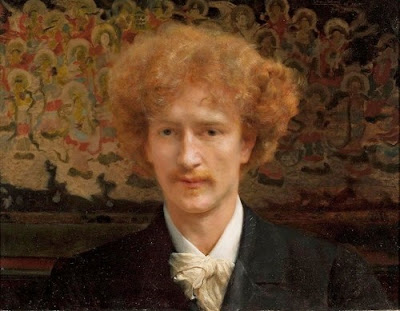 Paderewski moved to Morges in southern Switzerland in 1896, rented the beautiful fully furnished Chalet Riond-Bosson from Comte Le Maroisa, and made it into his permanent haven of serenity. In May 1899, following her divorce from her first husband, Helena Gorski (1856-1934) became the second Mrs Paderewski. She too moved to Morges and this time they bought Chalet Riond-Bosson. Undoubtedly Ignacy said, the most important place in his long life was Switzer­land. The Swiss citizens had adopted the couple with pride.

In 1902, Paderewski organised his next American concert tour, travelling in his own piano-filled railway car. In 1904, he continued his concert circuit across Australia and New Zealand. Australian music lovers packed out the Melbourne Town Hall and filled the streets outside; the newspapers wrote that never has Liszt or Schumann been performed so skilfully. Paderewski received encore after encore.

Was he as good as the claims? Some musicians said he was the greatest Bach exponent of his time; that his Beethoven, Liszt and Chopin renditions could not be surpassed. Perhaps he was not the greatest piano virtuoso in the history of music, but he was the most multi-talented. He was also a composer, a tireless activist campaigning for Poland's independence and later a Polish politician.

In 1910 he toured across Europe yet again, giving concerts, inspiring men of letters and composers. Sir Edward Elgar used various motifs taken from Paderewski's Fantaisie Polonaise in his symphonic Prelude Polonia and Camille Saint-Saens dedicated a Polonaise for two pianos to the Pole. 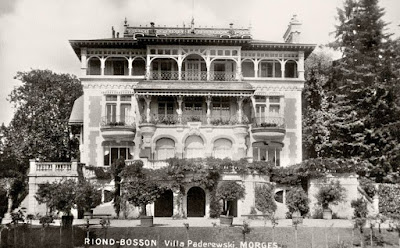 Soon Paderewski started combining his concert programmes with speeches camp­aigning for Polish independence and famine relief. The outbreak of WWI in 1914 found him safely back in his Swiss villa. But with the approval of the Swiss government, he soon became head of the General Committee for Aid to Polish Victims of the War. He lobbied for the formation of similar committees in France and Britain, and made public speeches, in Polish, to Polish expats across the world. And he donated his own money to the Polish Victims Relief Fund.

Paderewski called for the formation of Polish Army to fight during the later years of WWI, and became a member of the newly formed Polish National Committee. Soon, the French government despatched a Polish-French mission to America to recruit volunteers to the Polish Army from among the 2.5 million Polish ex-pats who had migrated to the New World. Because the USA had not yet join the Allies, the training camp for Polish Army volunteers had to be established in Niagara-on-the-Lake in Ontario, Canada. Paderewski visited the camp and addressed the troops. After the USA declared war against the Central Powers, a Polish Army training camp was also established on USA soil at Fort Niagara. Shipped to France, units of the Polish Army finally saw action of the Western Front.

After the Armistice, Paderewski travelled to Poland where he received a hero’s welcome. Poland’s new head of state asked the musician to become Poland's Prime Minister and Foreign Minister. Paderewski agreed, and represented Poland at the Peace Conference in Paris; he became the Polish signatory on the Peace Treaty at Versailles.

Never a dedicated politician and unsuited to that type of work, Paderewski resigned in July 1920, went back to Switzerland and never set foot in Poland again. He could now resume his musical career. On his 1923 concert tour of the USA, his magical performances were enthusiastically received by the audience and critics alike. National and international honours were being tossed around like confetti. 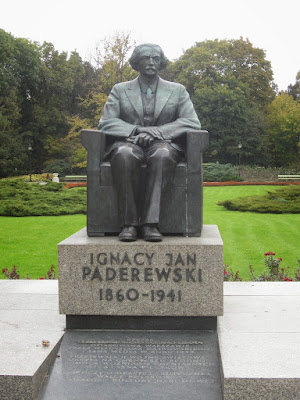 Ignacy Paderewski statue, 1988
Skaryszewski Park in Warsaw.
The park was designed and built in 1905.

In 1939, Poland was again partitioned. Paderewski travelled to the League of Nations in Geneva to ask for help for Poland, and became the head of the National Council in exile. But Paderewski was nearing the end of his life. He died in New York City in 1941, lying in state in St Patrick's cathedral, from where his body was conveyed on a horse-drawn gun carriage and then by special train to Washington DC. Of course he wanted to be buried in Poland, but not until the country was free and independent. That occurred in 1992; his body was re-buried in the crypt of St John’s Cathedral, Warsaw.

No wonder the women loved his performances.

He looks like the Art Garfunkel of his time! His achievements outside of music may have been enough to make him famous on their own.
CLICK HERE for Bazza’s fabulous Blog ‘To Discover Ice’

Hello Hels, When I collected old records, Paderewski's 78's were frequently encountered. Although he was not central to my collecting interests, I enjoyed many of his charming performances.
--Jim

Some people just seem born to be high achievers and he was clearly one of them. It is always a bit exciting to hear an internationally famous person visited Australia back then, even more so that he performed at our own town hall.

Do you have a photo of the pianist's tomb or statue in Poland? I hope the Poles warmly welcomed his public image back in their parks and churches.

you mean his piano performances, I am assuming :) Let me quote from Prof Lidia Kozubek:

"During Romanticism, virtuosos frequently displayed their keyboard skills by adding ornaments or variations to already existing musical material. Such practices were considered as the performers’ right and privilege. They opened doors for further displays of musicality and artistic inventiveness." But not every composer liked inventiveness. "One must be aware of how much this practice was abused. Chopin, who never played the same way twice, put enormous effort into writing down exact final versions of his works".

interesting that you would say EXACTLY the same thing as my late mother said. Although Paderewski he was not central to her collecting interests, she did enjoy many of his performances. But while she had every musical score written by Russian, German and Austrian composers and every book published about them, she owned precious little about Paderewski. (I know.... I inherited her library).

I always ask the same questions - what attracted star performers from Europe to travel to Australia during the late 19th and early 20th centuries? And were they hugely successful here?

I think he is still very popular. The huge Skaryszewski Park in Warsaw developed, in part, thanks to a private subsidy from Paderewski himself. The park was completed by 1905.

The famous bust of Ignacy Paderewski now stands in pride of place at the entrance to this park, but it did take until 1988 before people could "visit" their favourite composer.