The town of Hay-on-Wye lies on the border between England and Wales, tucked into Brecon Beacons National Park and the River Wye. Most of the town is in Wales but the eastern part of town spills over into England. King Offa of Mercia built an enormous earth wall in the later C8th to protect himself from the Welsh. This now forms the line of the Offa's Dyke Footpath, which runs from South to North Wales along the border. 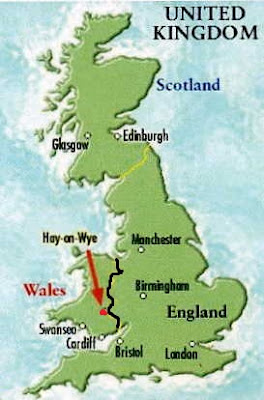 UK Map
Hay on Wye is on the Welsh-English border.

It is easy to see the gateway of the Norman castle which towers over the narrow streets beneath its walls. Hay Castle replaced the earlier and much smaller castle built on an artificial mound close to Hay's parish church in St Mary's Road. William de Breos II, who had been one of most deceitful of the Norman Marcher Lords, built the present castle in c1200. William irritated King John who took vengeance by imprisoning William’s wife and son. William fled to France where he died in poverty in Normandy in 1213. His body was taken to Paris and buried in an abbey.

Because of its position, the town has seen many battles through the ages. The castle was attacked several times in its history from both sides of the border. It was destroyed by the English King John in 1216, and soon after the Welsh Prince Llywelyn set fire to it. Its history of being tussled over by Welsh and English has given Hay a double identity. 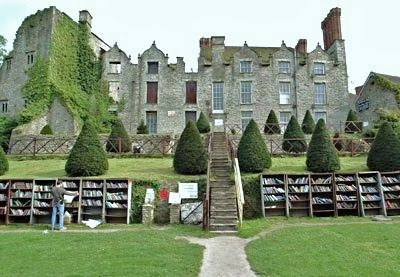 The town’s historical records are in good condition eg parish records of the many churches, including non-conformist chapels. Records also exist of the almshouses, built for moral women who did not have families to support them. And because Hay was on the road to Brecon, it was once the most important town for miles around. I note a long history of coaching inns and pubs, and the tradition of offering food and lodging to travel­lers. The rural curate Francis Kilvert (1840–1879), for example, was a frequent visitor, working primarily in the Welsh Marches between Hereford and Hay on Wye. He carefully recorded the town’s activities in his diary.

Were the resident Welsh farmers of the fertile and hilly Wye Valley closely connected with sheep and cattle farming? Or were they townies in wealthier houses, often owned by English families? Both! The Market has always played an important part in this town, and for people from the surrounding countryside. The Wye Vall­ey Walk, runs through the town enables visitors to ride, canoe or cycle nearby.

The book-lover used to be able to visit 30 amazing bookshops, Richard Booth's Bookshop being the grandest and best-known of the book­shops that spread across the few small streets. Richard Booth had been the man who, in 1961, opened the first second-hand bookshop in Hay’s old fire station. And it was his vision that one day Hay would become a town of booksellers, each an expert in his/her own specific field. By the early 1970s, when I lived in the UK, Hay had become internationally known as the Town of Books.

Each book shop has its own specialty. Visitors go to Murder and Mayhem for detective fiction, true crime and horror; Rose’s Books specialises in rare and out-of-print children’s and illustrated books; C. ArdenBookseller is more popular for natural history, botany and gard­en­­ing; and Addyman Annexe has lots of stuff. Then every May the town celebrat­es its Hay Festival that not only brings in 80,000 writers, publishers and book fans, but also film-makers, historians, philosophers, environmentalists, musicians and scientists from all over the world to swap ideas. Remember the permanent population of the town is only c2,000 people. 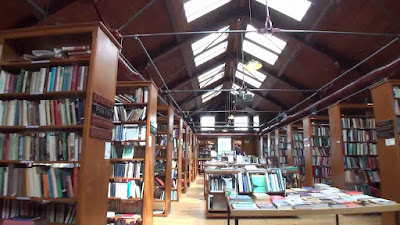 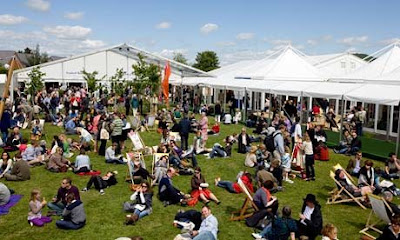 Hay Festival of Literature and Arts
Inside one bookshop (above)
Tents, outdoor bookstalls, discussions and deck chairs (below)

If I had to select a favourite, it would be Boz Books which specialises in C19th literature. For fans of Victorian authors like Charles Dickens, George Eliot and Anthony Trollope, Boz Books is like dying and going to heaven.

Is there a future for the town, now that the younger generation uses Kindles instead of books? Certainly the number of book shops has reduced in the last decade. But Mostly Maps says a new chapter has now opened in Hay with the acquisition of Hay Castle, Richard Booth books and Summerhill Golf Course by Elizabeth Haycox. She appears dedicated to enhancing the arts in Hay-on-Wye - she is building a theatre, a cinema, a wonderful restaurant and has renovated the dusty Richard Booth books.

Hello Hels, Sounds like my kind of place and festival. I am deprived of English books most of the time, and I can never import enough, but every time I visit home I go on a book-buying binge, although in Cleveland there are fewer and fewer used book shops to visit. Trust me, now is the time to be buying books, when so many people and even libraries are dumping them in favor of (often inferior) electronic resources.
--Jim

I love to read in bed at night. Who can do that with an electronic device??

do you believe bookshops are closing because it is cheaper and easier to buy books on line? or because people aren't reading paper books in the old fashioned way? For me, it is because I filled the house up with books, instead of reading them and then selling them/putting them into the library at work. My children had to leave home because I needed their bedrooms to extend the library.

Being deprived of English books sounds like cruel and unusual punishment :(

when our fathers were demobilised in Dec 1945, little did they know they would be giving birth to the last generation that likes its books in hard covers. I go to book fairs each year and they are filled with Baby Boomers!

Elizabeth Haycox sounds like someone to be treasured. The golf course is a curious purchase but I am sure she knows what she is doing.

We had to add a room to our house in order to keep up with the many books! I hesitate to think what will happen if that room fills up!

When the Hay Festival first started in the 1980s, the locals assumed it would be the book business as usual, only outside on the lawns. Now the suggestion is that vigorous tourism will still be based on literary activities, but a wider range of activities will be on offer - music, panel discussions, great food, cinema and even golf. Well done, Ms Haycox.

you are a man after my own heart.

I have a tiny bit of a solution. Every time you are invited to a birthday, dinner party, wedding, engagement, bar mitzva, graduation celebrations, house warming or christening, don't take chocolates or flowers. Give a book from your collection that you know would interest the bride and groom, university graduate or newborn baby.

Let us say you have 5000 books and you go to 10 parties and celebrations each year. You won't run out of gifts until the year 2516.

Tracy Chevalier’s best-selling novel Girl With A Pearl Earring inspired many readers to look at Vermeer’s famous painting more closely. Now she has participated in a documentary film directed by Phil Grabsky – part of the pioneering series Exhibition on Screen. How did the writer help the award-winning film-makers to bring the work to life? How has the film affected her own understanding of a painting she thought she knew well?

I happened to be in the London Underground in 2000, soon after Girl with a Pearl Earring by Tracy Chevalier was published. It was on one of those enormous escalators with posters on each side, and I glimpsed the front cover of the Vermeer painting in passing. Being a Vermeer fanatic, I was hooked - changed my plans for that morning and went straight to the closest book shop. One of my better decisions in life!

The Festival has been very wise in presenting a film that links the worlds of art and literature. Thank you.