David Garnett - how much sex did one writer need????

I have asked the students to read Bloomsbury's Outsider: A Life of David Garnett, written by Sarah Knights and published by Bloomsbury Reader in May 2015.

David Bunny Garnett (1892–1981) was the only child of the very lit­er­ary Edward Garnett, and his very literary wife Constance. Edward Gar­nett was a friend and advisor to such writers as Maugham, Lawrence, Forster, Wells and Conrad. Young David seemed to be brought up with­out the normal limitations; for him, home schooling, trips to Russia and dad’s writer friends were a constant. David met them all.

Driven by some sort of need to be constantly in love, he dazzled men and women, believing the person mattered, irrespective of gender. Yet Garnett “considered himself a congenital outsider, attracted to experimental living, to life beyond the mainstream”. But was he a true Bloomsbury outsider? The group’s core was the Stephen family, Vanessa, Thoby, Virginia and Adrian, and the friends Thoby met at Cambridge: Leonard Woolf, Clive Bell, Lytton Strachey and Saxon Sydney-Turner. At 46 Gordon Square, Thoby’s regular salons introduced his sisters, Vanessa, who was studying art at the Royal Academy under John Singer Sargent, and the writer Virginia, to his crowd’s intimate gatherings, where they would read aloud, and discuss literature and philosophy. But Garnett was neither a student at King’s College Cambridge, nor an habitué of Gordon Square. 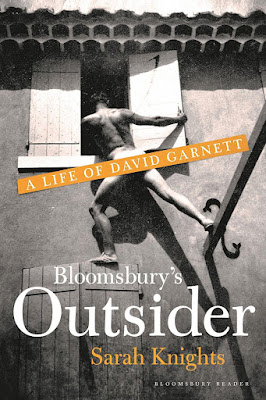 Garnett was a generation younger than Roger Fry and younger than the Stephens and the Bells. Garnett’s position in the Bloomsbury Group was cemented when he met Dun­can Grant at Lytton Strachey’s 1914 Christmas party. Garnett felt closest to Vanessa Bell and Duncan Grant, his male lover, with whom he lived during WW1. Nonetheless Vanessa gave her blessing to Duncan and Bunny’s affair, telling Bunny that “she was in love with Duncan but couldn’t feel jealous of a man”. Clearly the relationship was only damaged by Duncan’s jealousy at Garnett’s endless affairs.  Lytton Strachey lusted after the young man and Lady Ottoline Morrell invited him to her Bedford Square salon. But it worked. Well-placed friends offer­ed him good jobs, no matter how unsuitable his qualifications.

When I talked with the students in lectures about the Bloomsbury relationships, I used a two dimensional matrix with straight and broken lines. In 1920 he met Rachel “Ray” Marshall, the sister of Frances Marshall, who after her marriage to Ralph Partridge, prev­iously married to the artist Carrington, who loved Lytton Strachey, who loved Ralph, became the diarist Frances Partridge. Got that?

In 1921 Garnett married Rachel Ray Marshall. Ray was a talented book illustrator and in 1922 Garnett had his greatest literary success. Lady into Fox was a novella which he wrote and she illustrated brilliantly. It told the story of a man whose beloved wife turned into a fox and so was lost to him. A metaphor for what he believed to be the absurdity of fidelity in marriage, perhaps.

The money he made from Lady into Fox enabled Garnett to buy a C17th manor house near Cambridge called Hilton House. 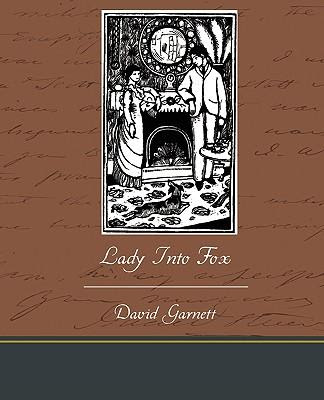 He opened a London bookshop with one of his male lovers, Frankie Birrell. This strange Bloomsbury bookshop, called Birrell and Garnett, was a hub for discussions of the latest literary sensation. Lady into Fox won two literary awards, and raised his reputation as a journalist. He soon became literary editor of the New Statesman and Nation.

Garnett repeatedly cheated on his wife, at the same time making it clear to her that these peripheral affairs weren’t important to him. As a result Ray fell into tears or into resentful silences, both of which irritated him totally. Was Garnett totally insensitive to his wife’s needs? Did he not care? During Ray’s illness with cancer, Garnett had already been courting the teenage Angelica. What a relief for the widower when poor Ray died in 1940.

The long Bloomsbury friendships were threatened only when the middle-aged Garnett planned to marry Vanessa Bell and Duncan Grant’s daughter, Angelica. It should have occurred to Garnett that since he was Duncan Grant’s ex-lover, marrying his lover’s child was vaguely incestuous. No matter; they married in 1942.

Unlike Ray Marshall, this second Mrs Garnett (Angelica Bell) seemed to have been a stronger wife, at least when he went off with his men friends. Angelica got her revenge after her husband died. She wrote a critical memoir about her family life, appropriately titled Deceived with Kindness, concluding that her love for him was simply a delusion and that he was a predator. But their four daughters were not strong survivors; one may very well have killed herself, while another attempted it. Garnett had been an insensitive and absent father. 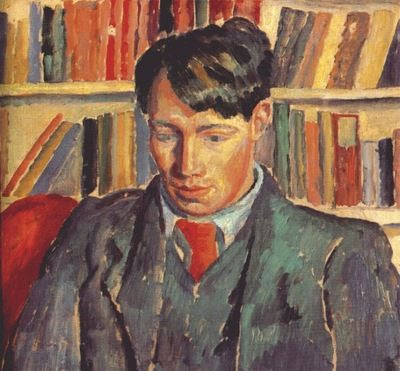 From 1969 until his death in 1981, Bunny Garnett lived mostly alone, in a tiny stone cottage in France. His life was full of strange situations. Trained as a scientist (botany) at Imperial College London, Garnett worked as a novelist. In WW1, he was a conscientious objector. A believer in free love, he married women. He loathed literary criticism but became a leading literary critic. Garnett was clearly a Bloomsbury insider pushed into contra­dictions.

Sarah Knights summarised a messy life thus: “Bunny was not perfect. He espoused honesty but lacked self-awareness. His need for diversion was often destructive. He was cruel to his wife Ray. Perhaps he was selfish in loving Angelica and marrying her. But as an imperfect example of humankind he created courageous stories, wrote beautiful prose, supported his friends, helped other writers, remained true to his convictions and loved his family.” I have to disagree. I don’t mind that he was bi-sexual or polyamorous, but I do care that he thought about nobody’s emotional needs except his own. Not his wives, not his children’s and certainly not his lovers. Being a great writer did not make up for his other failings.

Hello Hels, I agree with you--Garnett sounds like pretty sleazy as a human being. If the affairs meant nothing to him, then why did he take part in them, especially knowing how this affected his wife. I don't believe that creativity in one part of your life justifies or balances out deliberate meanness or cruelty. (The composer Wagner is possibly the strongest example of this concept.)
--Jim

Wow. Bloomsbury' outsider looks in the top photo as if he is definitely getting IN.

I can think of many artists and writers whose work I admire enormously but who in their private lives were cruel. Wagner might be a good example for me to look at this year, particularly when we discuss Felix Mendelssohn, Giacomo Meyerbeer and Jacques Offenbach in lectures.

Charles Dicken's wife Catherine had 10 children in 15 years, so he thought she had became sloppy around the stomach and always tired. He cruelly locked her in a separate room, never allowed the children to see her while he was alive and wrote a vicious letter to The Times explaining why he was disgusted. Then he moved Catherine's 17-year-old sister Mary into his house to "look after the children".

Unlike Wagner and Dickens, David Garnett was at least affable, good looking and socially skilled, never intentionally cruel. I will still read Garnett's writing, but I will not listen to Wagner nor read Dickens.

I tried to find the events surrounding that photo. The Spectator merely says "Bunny Garnett climbing into a window at La Bergère, Cassis, in the 1920s".

I am assuming the photo must have been carefully posed. His social and physical charms were well known, but even an extrovert doesn't get caught widely straddling the side of a barn totally naked.

A cad is perhaps a good description. What was it about Strachey? I have never thought he was attractive at all, although I don't think I have seen a photo of him without a beard.

What happened to Hilton House? I don't think I knew of Garnett's house before.

It is interesting to read Lytton Strachey: The New Biography by Michael Holroyd Garnett. This book describes how Garnett and Strachey met in Dec 1914 and were intellectually and sexually very comfortable in each other's company from the start. Their letters are fascinating.

I have seen photos and paintings of all the Bloomsbury group when young, but I have _never_ seen one of Lytton Strachey without a beard.

Knights said Garnett fell in love with Hilton House, as spartan as it was. Over the years it was decorated with beautiful things, including paintings by Duncan Grant and Vanessa Bell. And the garden was the part that Garnett loved most. So why was the property given by Mr David Garnett to Hilton Church and not kept in the family?

I have been reading about spotting narcissistic personality disorders . That's my diagnosis . That and a lack of empathy , maybe he was even sociopathic ???

It is interesting how normal social requirements are not mandatory for the creative and the talented. David Garnett was handsome, witty, strapping, huge fun to be with and a very talented writer. Yet the Guardian said "this bohemian author was a pageant of narcissism".

It wasn't that he betrayed his wife a million times - lots of spouses do that. It was that he totally discounted her pain! Worse still, Garnett felt irritated and betrayed when he could no longer avoid the signs of her pain.