A Spanish mission in California? No! It is in Western Australia.

The Kingdom of Spain had wanted to establish missions to convert the pagans to Roman Catholicism in New Spain i.e Caribbean, Mexico and most of what today is the south west of the USA. This was to save their souls, and to facilitate colonisation of these lands awarded to Spain by the Catholic Church. The c300,000 indigenous Americans had to learn Spanish, vocations and Christianity, whether they wanted to or not. So the first permanent Jesuit mission, Misión de Nuestra Señora de Loreto Conchó was established in 1697.

Most missions were small, staffed by 2 Franciscans and 6-8 soldiers under an officer, who generally acted as steward of the mission's temporal affairs. The church, kitchen, living quarters, workshops and storerooms were grouped around a quadrangle. A baptised Indian was no longer free to move about the country, but had to labour and worship at the mission under their rather brutal supervision.

To become self sufficient, crop farming was the most important industry of any mission. Grapes were also grown & fermented into wine for local use and for trade from the 1770s. Mission San Gabriel Arcángel introduced the California citrus industry in 1804. Olives (first cultivated at Mission San Diego de Alcalá) were grown, both for local consumption and for trade.

The vast lands controlled by the missions made them a target for Mexican republicans who, after gaining independence from Spain in 1821, took over Spain’s church lands. So what happened to the 21 Franciscan Alta California missions along the 966ks-long el Camino Real? At the peak of the missions’ functioning in 1832, the missions controlled perhaps a sixth of Alta California. But secularisation began in 1834. During the Mexican Rancho Period (1834–49), under the Decree of Confiscation, 9 settlements closed in 1834, with 6 more in 1835; San Buenaventura and San Francisco de Asís were among the last to close, in 1836. Other settlements with large land grants were turned into ranchos for cattle and sheep. The missions were fading in importance.

By 1994 I wanted to see them all. That wasn’t always possible because some missions crumbled from earthquake and other damage, and some were sold off to private enterprises. But I did see the best pres­erved missions, starting at San Diego de Alcala and ending at Mission San Francisco Solano de Sonoma. 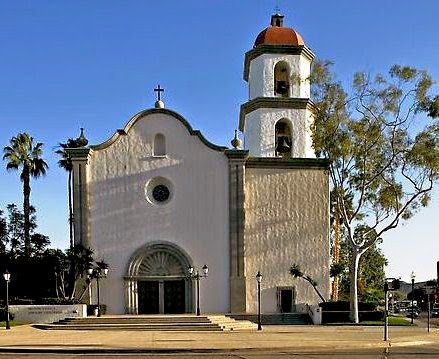 with New Norcia in Western Australia, founded in 1847 (below).
This abbey church contains the tomb of Dom Rosendo Salvado. 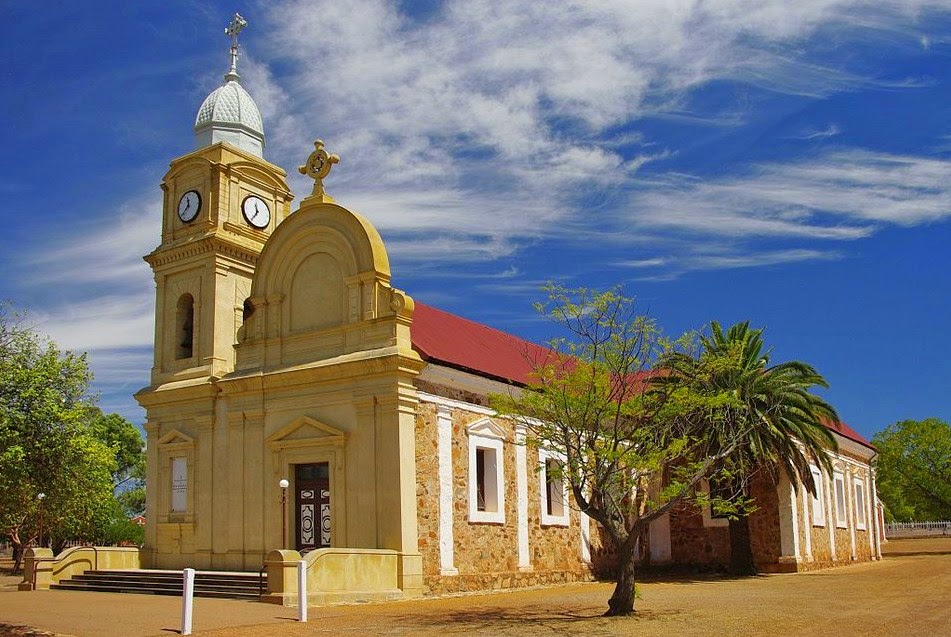 How extraordinary that 20 years later I “discovered” a Spanish mission in Western Australia. Located 130 kms north of Perth, New Norcia was founded in Feb 1846 by two Spanish Bened­ictine monks, Rosendo Salvado and Joseph Serra, a French novice, an Irish and an English monk from Perth. After five days the men had covered the distance and reached the home of Captain Scully at Bolgart. Inside a month (March 1846), a Benedictine mission to the local abor­igines was started. Within a year the mission was moved to where the town is today, and in March 1847 the foundation stone of the monast­ery was laid. The place was named New Norcia, after the Italian birth place of St Benedict.

Building moved ahead speedily. The school for Aboriginal boys was opened in 1847. The community expanded, growing to 250 at its peak in 1885, including 70 Spanish monks. Among the most impressive buildings were the two old Catholic boarding schools, St Gertrude's (opened 1908) and St Ildephonsus' (opened 1913). In 1972, St Benedict's and St Gertrude's united, becoming Salvado College. In 1986, Salvado College became New Norcia Catholic College, but nothing could save the school. It closed at the end of 1991.


There were also two aboriginal orphanages - St Mary's for boys (next to St Ildephonsus') and St Joseph's for girls (next to St Gertrude's), which closed in the early 1970s.

The mission’s relationship with the local Yued people was vital, although is difficult to know how exploitative the mission was of local aboriginal partic­ipants. Salvado was abbot until his death in Dec 1900. And during this long era, the mission believed Salvado respected the interests of Aborigin­al people, at least to the limits of his experience as a mid-C19th Benedictine monk. To do this it was important to create a self-sufficient community, and his go-ahead spirit set the course through a focus on wool prod­uct­ion. On the other hand Fiona Paisley's book called The Lone Protestor (Aboriginal Studies Press, 2012) said Aborigines there accused the mission of hastening the demise of Aborigines. They said they were underpaid and underfed.

If you are driving north from Perth today, you will arrive at what looks like a Spanish township, centred around the domed steeple of the Abbey church with the tomb of Rosendo Salvado, surrounded by palm trees, and the monastery. Clearly the town of New Norcia wanted buildings designed in a Spanish style of architect­ure, as can be seen in the an old mill, the wine press and a hotel.

The New Norcia Hostel was built in 1927 to accommodate families who were visiting theological students. I have seen thousands of Australian pubs over the years and this doesn't look like any of them.  Rather it appears to be a Spanish colonial mansion in the Australian bush.  Anyhow the hostel later became the New Norcia Hotel and is still in business. Visitors can go on tours of the town which are operated daily by the Friends of New Norcia; accommodation is available in this hostel or in the monastery retreat. 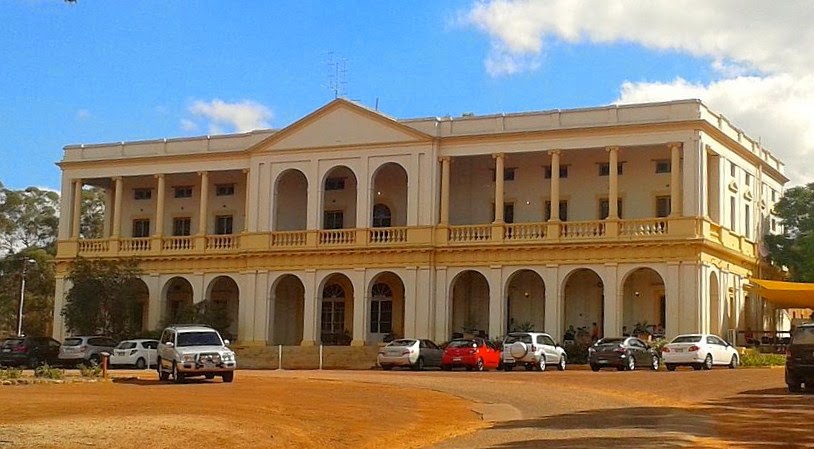 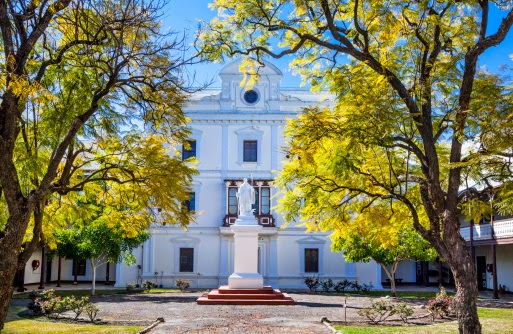 Over its history New Norcia has been an Aboriginal mission, a centre for education and a place of hospitality and culture. Abbot Placid (died 2008) was Superior of New Norcia for 25 years and during this time, New Norcia gradually discovered its special identity as Australia’s only monastic town. Thus today it continues to be the home of a small community of Benedictine monks who actively manage the site.

New Norcia Archives provide a complete collection of diaries, chron­icles, maps, letters, reports and records that focus on the story of New Norcia. The photographic collection alone holds 60,000 glass negative photographs. The achievements of the abbots and the men are very well documented in the current exhibition In Search of Rosendo Salvado in the New Norcia Museum and Art Gallery.

Abbot Placid believed the New Norcia story reflected the great historical themes of the whole nation - agriculture, immigration, education, religion and our interaction with the indigenous peoples and cultures. Can we sensibly compare this mission with the Spanish missions in California?

What were two Spanish Benedictine monks doing in a British colony like Western Australia? It looks as if they travelled to Mexico or USA and copied the church as best they could.

I easily found information about Rosendo Salvado and Joseph Serra. They were Spanish born and educated, and became Benedictine monks and close friends in Santiago de Compostela monastery. Both were very keen to offer themselves for work in foreign missions. They worked in Subiaco, Fremantle, Guildford, York, Albany and Bunbury, and there were plenty of trips back to Europe.

But so far I have not found anything about how the British colonial decision makers felt about Spanish Benedictine monks taking up land and establishing services from 1846 on.

I first became aware of New Norcia when a book called A Day in the Life of Australia was published in 1981 and I bought it. I've since tuned my ear to anything about New Norcia and an interesting place it was and is. I just had the book out and there are several photos but none showing the building(s) properly.

Amazing! I was completely unaware of such a place.

I think that book opened many peoples' eyes, even Austalians who thought they knew their own country. Now we have to learn more by going on the New Norcia Heritage Trail, a 2 km walk that links up all the important sites in the town.

Spouse and I lived in Perth for a few years and loved it. We discovered every inch of Fremantle, Mandurah, Bunbury, Albany, Kalgoorlie etc, but nobody ever mentioned Australia's only monasterial town.

Hello Hels, What a surprise to see a full-blown Mission in Australia. My guess would be that it operated somewhat differently from the California missions, especially politically, but these are fascinating research questions. (Especially so if they give you access to those 60,000 negatives and other archives.)

In America, it seems that one is always a stone's throw from some religious compound or ideal community, past or present. Often there was much bias for or against these places, which must be taken into account when reviewing old source material.
--Jim

The West Aussie one looks quite flash.

"underpaid and underfed" is probably the case with the Franciscans too, and We Travel has forgotten that convicts were sent to Freo and the goldrushers came from many countries in 1847 and Dirk Hartog got there in the 17thC as well.
Every time I read about Victoria's billion dollar water plans I recall the pipeline 150 years ago that went out to Kalgoorlie and wonder how we cannot repeat that feat with all our modern equipment.

I agree that there was often much bias for or against these places and that the various biases need to be taken into account when reviewing old source material.

But I cannot find too much outside source material to analyse in the Australian case. The Archives seem to consist mainly of material generated by the staff of the New Norcia Mission.

For example Pope Gregory XVI appointed John Brady as first Bishop of Perth in 1845. Brady moved fairly quickly to open Catholic schools, churches and religious orders, and supported the foundation of the Spanish Benedictine monastery of New Norcia. I can understand that the Bishop’s vision did not coincide with Serra’s vision, but I cannot find why the Bishop of Perth was suspended in 1851 as a result of the clashes and later resigned. And even if it was true, does it matter that the Mission Archives seem unbalanced? ummm YES.

that is such an interesting point. Salvado and Serra both spent a great deal of energy amassing resources for their New Norcia mission, even at the expense of competing projects in and around Perth. Whenever the Perth communities opposed the money pouring into New Norcia, Dom Serra simply by-passed the local decision-makers and went to Europe to raise funds.

it is a truly amazing town, so clearly they had the resources AND the technologies to make it all happen. Both the first time around (mid 19th century) and the renovations (2011-12-13).

thanks for that link Hels, and never mind the water I went straight in
( CNTL+F then enter 'wine') looking for the Benedictin liqueur ... but sadly found only their blanc de blancs.

Mon Dieu. when I went to repair that tragic link I found "It is claimed that at the Benedictine Abbey of Fécamp in Normandy, monks had developed a medicinal aromatic herbal beverage which was produced until the abbey's devastation during the French Revolution, but in fact Alexandre Le Grand invented the recipe himself, helped by a local chemist, and he told this story to connect the liqueur with the city history to increase sales."

there really was a link between the Benedictines in WA and alcohol!

Along with the olive groves, vines were one of the first things planted by New Norcia’s founder Rosendo Salvado. But his successor was not as enthusiastic. Wine production increased and became more professional with the building of a stone winery at Wyening from 1914-1916. In 1916, 80 acres were under vines and in 1917 the first non-monastic vigneron was employed. Benedictine Abbey Wines then enjoyed their golden era with a full range of wines and spirits.