Synagogue architecture in Poznan in a desperate state

In 1848, Germans dominated numerically in the western and northern regions of the Grand Duchy of Poznan, although they remained clearly in the minority in the central and eastern counties. Additionally 80,000 Jews lived in the Grand Duchy of Poznan in Prussia, making this the largest Jewish population centre in the entire Prussian monarchy. Jewish citizens lived an urban lifestyle and constituted from 30-50% of the population in many of the towns. Jews of the province definitely identified with German culture, literature, music and architecture.

When the Jewish community of Poznan was big enough, in the mid-late C19th, they built two communities. The Reform Jews built a synagogue in the Moorish style (1856–7). In 1862 they elected their own rabbi, Joseph Perles. Perles, who later wrote a history of Poznań’s Jewish community, was succeeded in 1872 by Philipp Bloch, who served until 1921. 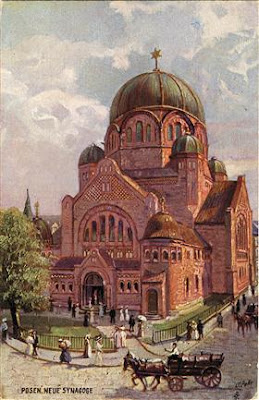 As the geographical size and population of Poznan increased, the proportion of Jews in the city fell: from 21% in 1831 to 13% in 1867 and 4% in 1910. Nonetheless a total of about 5,000 Jews flourished under Rabbi Wolf Feilchenfeld, on whose initiative a new and spacious synagogue was erected near Stawna St. The rectangular plan had been the most common for city synagogues, although around 1900 there was a turn to centralised plans, which were often domed. The centralised building was the style beloved by German Jews and so it was the style selected by Berlin architects Richard Wolffenstein (1846-1919) and Wilhelm Cremer (1854-1919) for Poznań. Of the eleven synagogues designed on paper by the two architects, eight were actually built, so this architectural firm certainly made a name for itself specialising in monumental synagogues. 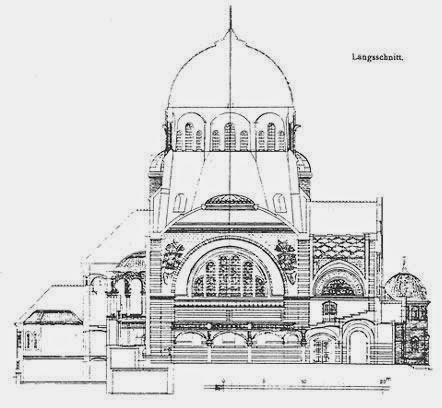 Built in 1906 and consecrated in 1907, New Synagogue was in the centre of Poznan's Old City; in fact the stunning copper-plated dome could be seen from all over town. New Synagogue was a lavish structure for 1,200 congregants with a floor plan based on the Greek cross. The building materials were bricks, granite (used for the plinth surrounding the synagogue) and steel (used for the dome and gallery). The spacious interior of the prayer hall, covered with a 20m high internal cupola resting on massive pillars, was broadened by an arcade opening inwards. This suggested the interior of ancient Byzantine cupola basilicas.

Built at a cost of one million marks, the stunning building was financed exclusively by local Jewish philanthropists. It was beautiful, inside and out.

When WW1 broke out, Poznan was heavily militarised. But as the war was ending and Germany was in retreat, the Great Poland Uprising (1918-9) and the subsequent treaty of Versailles returned most of the province of Posen to the newly established Polish nation. Poznan became once again a Polish city and the capital of the province. Most of the German population left Poznan for Germany.

To modern historians, it seems ironic that the defeat of Germany in World War I and the annexation of Poznan by Poland was perceived by the Jewish community as a shock. 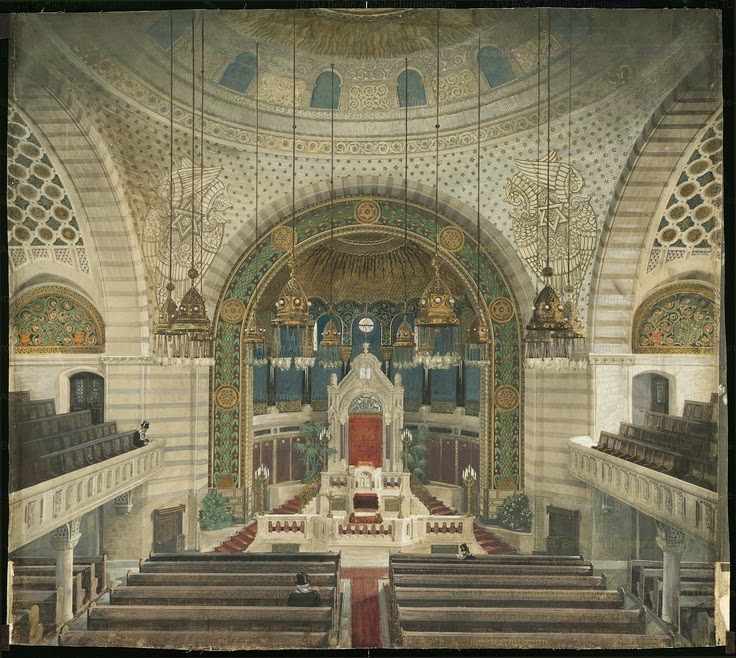 Nazi invasion in 1939 re-made Poznan a German city; the German authorities started to Germanise Poznan once again, expelling 100,000 Polish citizens to central Poland and bringing German settlers back into the city. During World War Two much of Poznan was destroyed, including over 90% of the Old Town, and almost the entire Jewish community of 3,000 citizens were slaughtered.

In 1940, this beautiful building was commandeered by the Nazis and redeveloped into a swimming pool-rehabilitation centre for Wehrmacht soldiers. Although the main architectural features of the building were not destroyed, the stunning dome was eliminated. Even today the synagogue’s exterior is largely intact, although without dome, tiles and handsome brickwork, it might look like a rather ordinary picture theatre. Or a rather ordinary swimming pool complex.

Legislation passed by the Polish Parliament in 1997 mandated that a formerly Jewish community facility can only be reclaimed by the Jewish community, through a recognised umbrella organisation. While this is a fair requirement, it is problematic, since most Jewish families in Poznan had been obliterated during WW2. 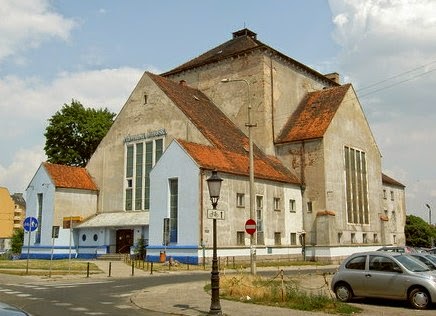 The synagogue was returned to the Jewish community in 2002 yet it still functions as a municipal pool. I have heard of plans to convert the old synagogue back into a Jewish community centre complete with prayer halls, kosher restaurant, library, theatre and conference facilities. However the Jewish community is tiny and the costs are too high. What a terrible loss, both culturally and architecturally, for a nation where Jewish citizens constituted 10% of the total population as recently as 1939 .

Finally there is a connection with an earlier post in my blog. In January 2009 Poznan’s Jews dedicated a Torah scroll and a prayer sanctuary in the community centre. The Israeli family who donated the scroll travelled to Poland with the Ra’anana Orchestra, in honour of Irena Sendler; she was a little known but hugely admired world war two heroine in the Warsaw Ghetto. 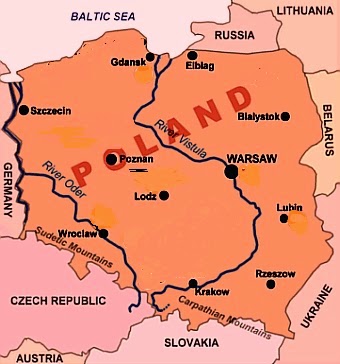 Map of modern Poland. Poznan is due west of Warsaw

Gosh what a complex history this building has had. Such extraordinary turns of events and such a pity that the 'synagogue' is today a mere shadow of its former self.

We have little knowledge of Poznan but know that Krakow was also heavily under German control throughout World War II. There is a marvellous interactive museum outlining these events in the former Schindler Factory in Krakow.

In Budapest, the synagogue is the second largest in Europe. It is extraordinary that so many Thriving Jewish communities were completely wiped out in the course of the war. Such utter devastation and inhumanity is still inconceivable yo us.

My parents were survivors not from Poznan but from a bigger city (Lodz). Did anyone survive WW2 in Poznan?

I am delighted the former Schindler Factory in Krakow was retained and restored in 2007 for its very important historical value. I would have presented this museum differently, but we have to be thankful Emalia wasn't razed to the ground.

Poznan does not seem to have the same commitment to retaining its historically and aesthetically important sites. Or perhaps the money isn't available.

In Your Pocket Guide to Poznan wrote that a small number of Jews survived in hiding during WW2, and after the war several hundred actually returned to re-settle in the city. But they were not made to feel safe and so the number of Poznan Jews soon dwindled to well under a hundred.

Hello Hels, So much of Jewish life and culture were lost in Poland that there is an extra importance to maintaining this site and acknowledging its history, even if a full restoration is not in the cards for the immediate future.

Incidentally, I cannot help wondering what the interior looks like in its current state. I wonder how much of that elaborate decoration is extant.
--Jim

Re acknowledging the history of the building, there is a proper brass plaque in four languages.

The interior of the building has been stripped bare and looks like any other swimming pool:

I stumbled across your blog post and read with interest what you had to say abut the old synagogue. I recently visited Poznan in search of historical materials about my family - my dad was born there. We were hosted there for a couple hours by Alicja who heads the local Jewish community and is instrumental in raising funds to restore Jewish sites. She has a fund for the old synagogue, to which you might want to contribute. Here is the website.
http://www.poznan.jewish.org.pl

That seems a big task, doesn't it. But one well worth sharing. When I remarked that the swimming pool synagogue was functional but ugly, I meant it literally :(

Neither my family nor my husband's family comes from Poland, but in my year at school the children were almost all born straight after WW2 to Polish survivors. On your trip to Poznan, I hope you found some of your father's history intact - the written records? the house.. and shop?