the birth of democracy in Australia - Eureka Stockade 1854

The Eureka Stockade Rebellion (Dec 1854) was fought between rough and rugged gold miners, on one hand, and the British Colonial forces in Australia, on the other. There is not a primary school student in this nation who would not know about the rebellion in Ballarat, or be able to pick out the Eureka flag. 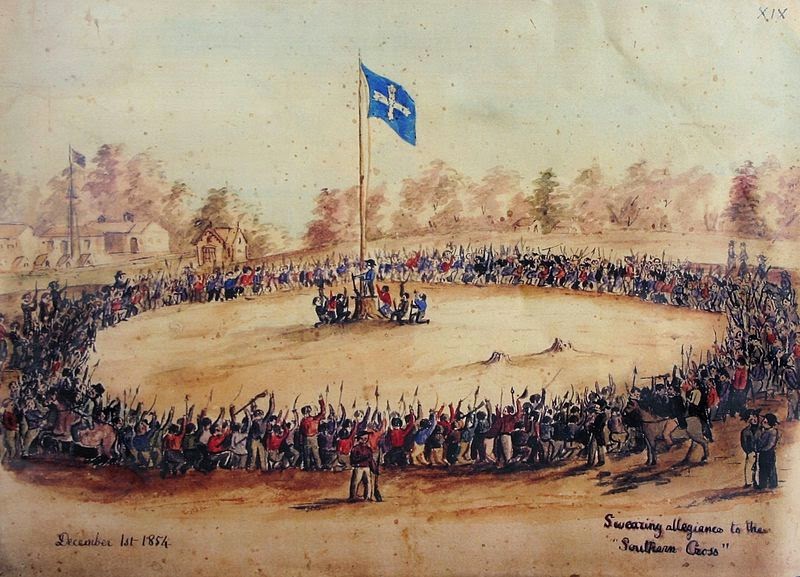 Doudiet, Sweaing Allegiance to the Southern Cross flag of Eureka, 1854

In 1854 there were c25,000 diggers of many nationalities on the Ballarat goldfields. And this was the very time that the gold miners were in revolt against the colonial authority of the United Kingdom. Civil disob­ed­ience in the Ballarat region during the Victorian gold rush had st­arted with the miners objecting to
a] the expense of a Miner's Licence,
b] taxation without representation and
c] the tough and possibly corrupt behaviour of the government's police and military forces.

Several Reform Leagues had been established in the city but they failed, so the ultimate rebellion in Ballarat was the culmination of the miners' civil disobedience. I am ass­uming the diggers did not know that by establishing a crude battle­ment and not paying the Miner’s Licence, a swift and deadly siege by colonial forces would come down on their heads. But they were wrong - the Battle of Eureka Stockade was brutally short, and fatal. Resulting in dozens of deaths, the majority of whom were rebel males, it was the most significant conflict in the col­on­ial history of Victoria, and probably all of Australia.


In 1854 Charles Alphonse Doudiet (1832-1913), a Swiss-Canadian artist and digger, was present at Eureka Stockade. His sketchbook, discovered by his descendants only 18 years ago, has provided precious eye-witness accounts of events connected to the Eureka Stockade and the Eureka Flag.

Australians don’t like violence, but they do enjoy the working class­es males sticking it up the nose of rich capitalists and greedy colonial authorities. Mass public support quickly emerged for the captured rebels when they were put on trial in the colony's capital of Melbourne, 120 ks from Ballarat.

And something else impressive emerged, directly out of the Eureka Rebellion. The introd­uction of the Electoral Act 1856, which mandated full white male suffrage for elections for the lower house in the Victorian parliam­ent, has been identified as the birth of democracy in Australia. The Australian Labour Party took shape directly as a result of the workers’ struggles against wealthy exploiters in Britain and in Australia. To this day, the Construction and Mining Union flies the Eureka flag. But were there any women involved? Not that I knew of. 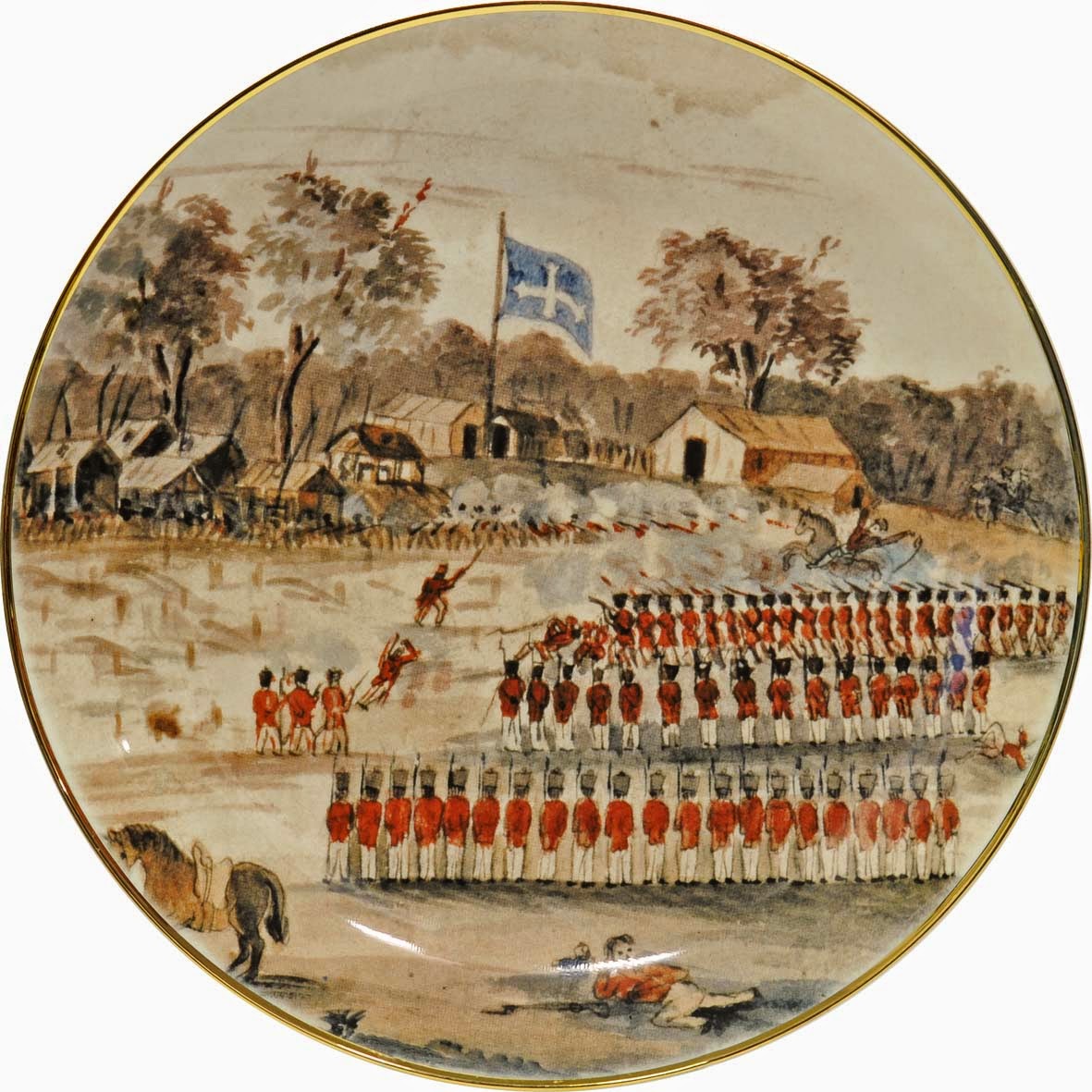 Enter The Stella Prize, an important new literary award celebrating Australian women’s writing, both nonfiction and fiction books. It was named after one of Australia’s iconic female authors, Stella Miles Franklin, and was awarded for the first time in 2013. The winner in 2014 was Dr Clare Wright, a historian at La Trobe University. Here is what Kerryn Goldsworthy, chair of the 2014 Stella Prize judging panel said about Wright’s book, The Forgotten Rebels of Eureka (published by Text Publishing, 2013).

“The Forgotten Rebels of Eureka sheds a bright new light on a dark old Australian story. In her account of the Eureka Stockade and the years leading up to it, Wright revisits that well-trodden territory from an entirely new perspective, unearthing images, portraits and stories of the women of 1850s Ballarat and the parts they played not only in its society but also in its public life, as they ran newspapers, theatres and hotels with energy and confidence.

A rare combination of true scholarship with a warmly engaging narrative voice, along with a wealth of detail about individual characters and daily life on the goldfields, makes this book compulsively readable. It has a highly visual, almost cinematic quality, with vivid snapshots and pen-portraits of goldfields life. It also moves briskly from one scene or character to the next, with variations in pace and mood, in a way that heightens anticipation and suspense even though we know about the violence that will eventually explode as the tensions between the miners and the forces of officialdom increase to a point beyond containment.

The book explores the different kinds of power and influence that women wielded, and reveals the importance of their role in the miners’ growing resistance to oppressive government regulations. That resistance culminated in the 15 minutes of chaos that came to be known as the Eureka Stockade, leaving four soldiers and many miners dead – as well as one unnamed and hitherto unrecorded woman, an eye-witness account of whose funeral Wright has unearthed in the private diary of a shell-shocked Ballarat citizen. 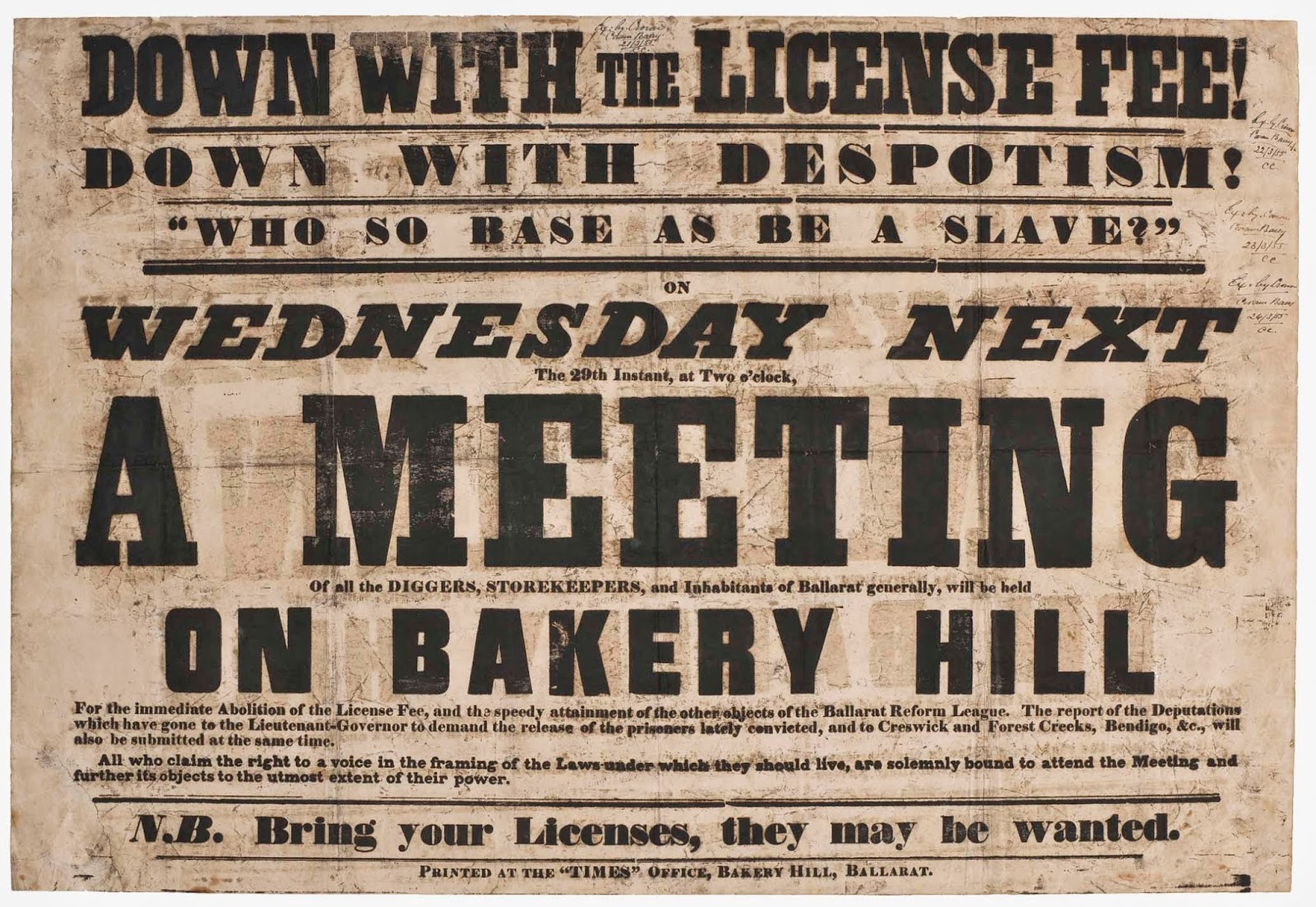 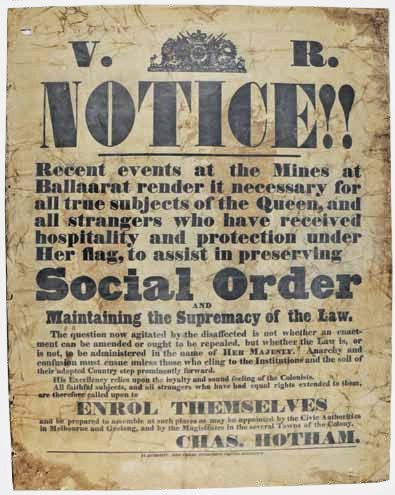 Public notice, after the Battle at Eureka, warning miners of the power of the Law.


Material from newspapers and journals reveals a flourishing female culture in the life of the goldfields: there are notices for dances and balls where childcare will be provided, stories of women setting up a business in baby clothes, even advertisements for breast pumps. Wright also makes extensive use of private journals and letters, which are always a revealing and sometimes very moving source of in­formation about the ordinary folk who get written out of the official records and histories. Her frank and lively style of storytelling makes her material accessible without sacrificing either the scholarly accuracy of her account, the depth of its detail, or the complexity of its ideas.

Traditionally represented as a key moment in the forging of Australian masculinity, the Eureka conflict and the events that led up to it are shown in this book to have involved many women as well. Far from the popular image of a wild shanty-town with an all-male population, the book reveals a relatively ordered goldfields society where commerce, domestic life and even theatre all flourished. The Forgotten Rebels of Eureka is a revisionist history written not in a corrective or a combative way, but as something more positive and celebratory: Wright does not attempt to discredit existing versions of events, but rather to deepen and enrich our knowledge of Eureka and our understanding of its place in Australian history”.

I realise the mythology surrounding the miners’ stand at the Eureka Stockade has taken on a life of its own, especially since we know that every nation needs its foundation myths and legends. But until now the story of The Eureka Stockade has been told as though only the male participants were there. Twenty five percent of the extended Ballarat community were female, most of them young and newly married. Now is the time to hear their story. 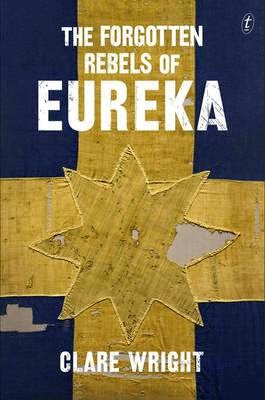 I remember examining the Victorian architecture of the gold cities in lectures, but i don't remember back as far as this. Who organised the rebellion and did they become heroes or villians?

the only name I know is Peter Lalor. Martial law started and the rebellion quickly collapsed. But the Government's huge victory was seen as vicious. Even in distant Melbourne, civilians turned out to boo the authorities and to honour the rebels and their reforms.

Thank you. I am embarrassed about how little I knew about a very important part of Australian history.

Hello Hels, It is interesting to compare this rebellion to what went on in the U.S. gold camps in California and Alaska. They were not part of the Colonial history, but occurred in the period of Western expansion and the creation of new states, and the miners of course were a big part of that. Although plenty of political shenanigans did take place, I don't recall any rebellion like that of the Eureka Stockade.
--Jim

I love that Martial Law was declared here in Ballarat. Many of the government troopers were ex-convicts and while inspecting Miners Licences on the diggings they would confiscate the miners home brew. I suspect this detail to be the real reason for the big fight.
Here is something funny: while reading about Oscar Wilde, I found out that 'our' Peter Lalor's father was part of the Dublin 'salon' held by Oscars mother who was known as Speranza and called for armed revolution. As Sir Michael Caine is known to say often "not many people know that'.

I am still at my conference and will be back to normal living by late Monday evening. Sorry for the delay in responding.

the mass killing of the diggers and the introduction of martial law seem very extreme responses to us. But I suppose Eureka was too much for the governor and his troops. Throughout 1853 and 1854 there had been protests, mass meetings, fights and political action. And not just in Ballarat.

By the way, who was Peter Lalor's father?

Agreed. I think mining was such a brutal industry in the mid 19th century that it was likely to be the site of rebellion all over the globe. California indeed plus I was thinking of nations as diverse as Wales, South Africa, Brasil and China.

You can get to the fathers link through this Peter Lalor wiki.
Direct link to the father won't work because wiki creator put a " in it.
The whole family were dedicated to standing up for their rights, and Lalors very arrival on the 1852 goldfields would have been a tip to trouble ahead for anyone rich who was treating anyone poor badly.

This sounds like a fantastic book and definitely a prize to look out for. I'd love to read more Australian literature, especially historic fiction.

some families seem to breed wonderful, committed people in each generation who take great personal risks on behalf of their community. I love the Lalors already!

agreed. But I wouldn't have known about The Forgotten Rebels of Eureka if it wasn't for the Stella Prize and the attendant publicity. I imagine there are many great books that don't win prizes and don't get read.

To Mandy Southgate above: you will love reading The Mystery Of A Hansom Cab, and Robbery Under Arms about bushrangers.
My favourite local book is Joan Lindsay's 1962 'Time Without Clocks' memoir of the artistic community that anyone would love reading. It has baby Rupert Murdoch on horseback and parties in London and Paris.

Thank you for the recommendations Ann! I've added all 3 to my Goodreads to-read list!