Rasputin: a short life and an ugly one

Grigory Rasputin (1869–1916) was an illiterate Siberian peasant who had a religious vision in the early 1890s and from then on, led the life of a mystic and sage. Frances Welch tells a great story in Rasputin: A Short Life (Short Books 2014), a story I would not have believed, had her book been a novel.


The last Romanovs, Nicholas II and Alexandra, were not happy people. The tsar had married the granddaughter of Britain’s Queen Victoria, who never quite adjusted to Russian life or lost her accent (she communicated with Nicholas in English). Their four daughters were healthy, happy teenagers but Nich­olas and Alexandra had to sustain vigilant watch over their only son Alexei, the haemophilic heir to the throne. If he fell over or bumped his limbs, Alexei might have quickly died. And the doctors prescribed the anti-coagulant aspirin, the exact opposite of what the young haem­o­ph­iliac really required. During his many bleeding episodes Alexis would suffer miserably, and his mother could but sit by him wretchedly.

In 1905 Rasputin was recom­mended to the royal family by their confes­sor. And it appeared as if Rasputin was only person who could help young Alexei. During bleeding episodes, Rasputin would talk quietly to the boy, calming him and lowering the heir's blood pressure, easing the bleeding. Contemp­or­aries claimed that Rasputin could also hypnotise Alexis with his eyes, further calming the lad.

How strange that a holy man with bad teeth, manky hair, smelly body and debauched sexual habits had this sort of charisma. Welch said he carefully cultivated these disgusting qualities to ingratiate himself with the royal family of Russia. Even more disgustingly, he seduced thousands of young women by day, and became fall-down drunk in the evenings.

For Tsarina Alexandra, Rasputin was a Man of God. He became a frequent visitor to the royal household and the tsarina offered him every gift under the sun, as long as he kept Alexei alive and well. 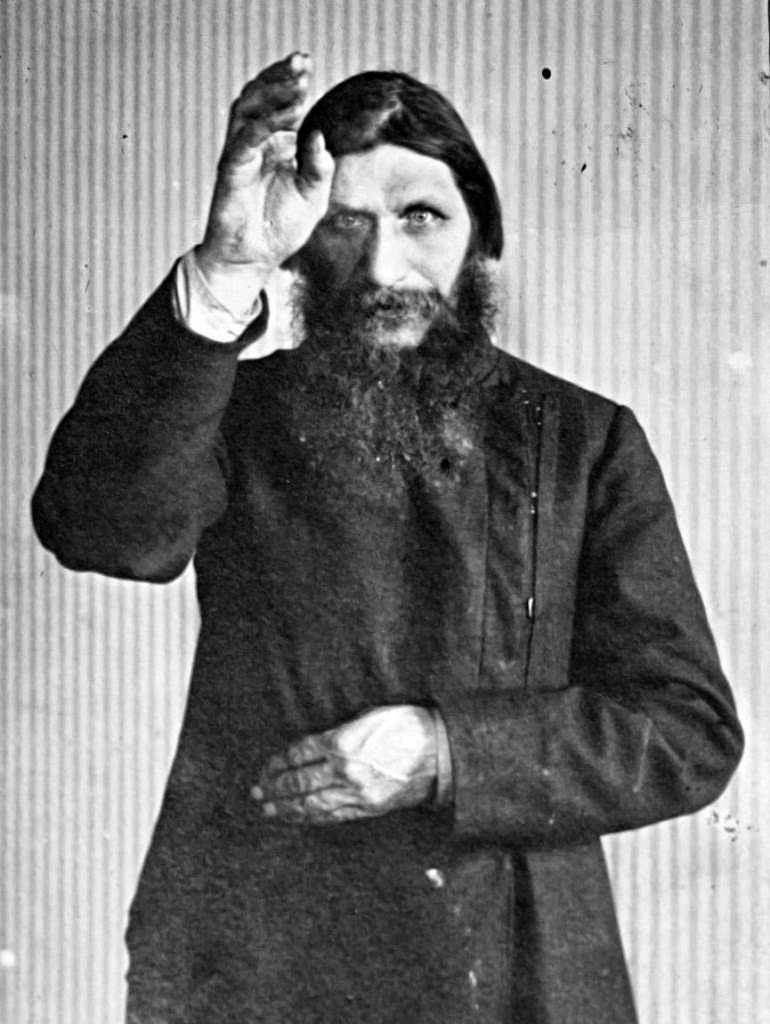 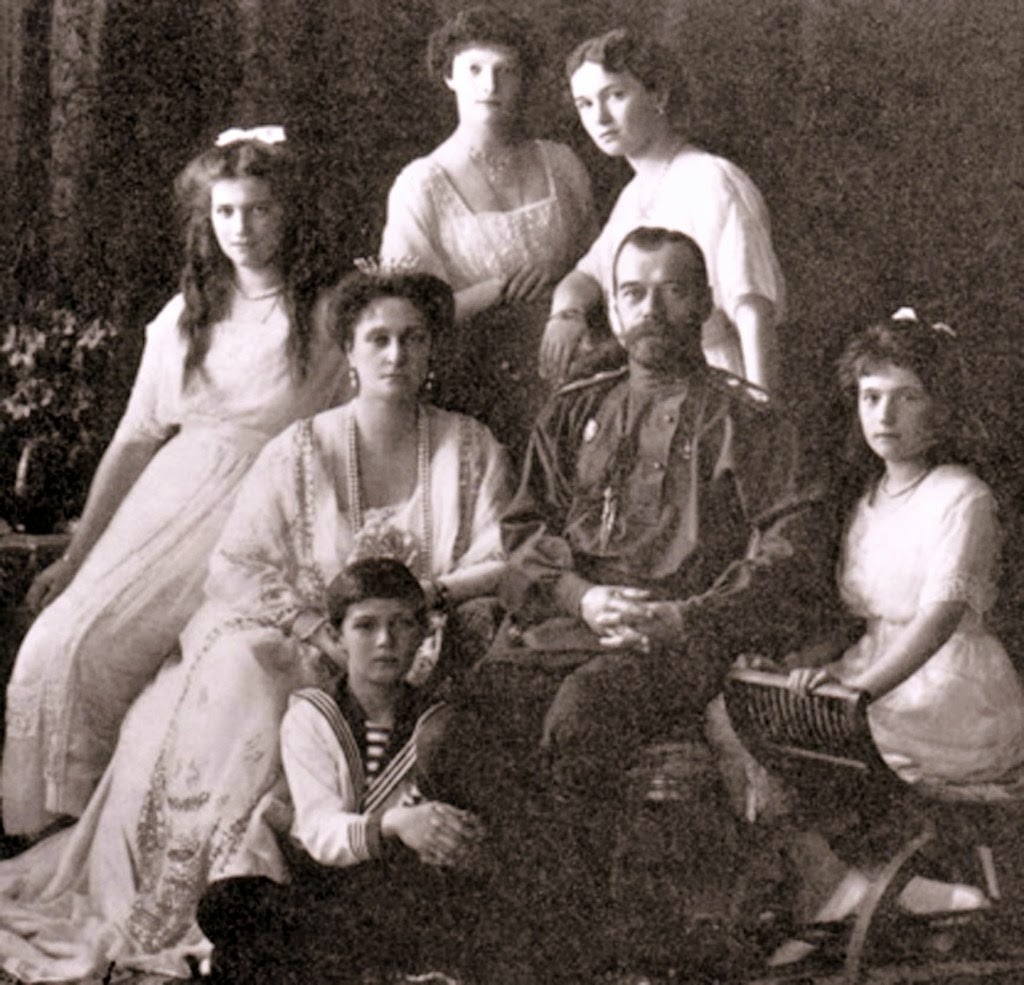 In 1905, after a war with Japan ended in defeat and civil unrest arose in St Petersburg, Nicholas was reluctantly forced to grant a constitution and convene a parliament, the Duma. As soon as the Duma became too bold in its demands, Czar Nicholas dispersed it. Another Duma was called but it too was closed. This unrest had nothing to do with Rasputin, but the timing was important. Rasputin's relationship with the royal family was became public and scandalous knowledge. And no matter how many political or church delegations begged the royal couple to throw Rasputin out of court, Alexandra would not listen to a single word they said.

In fact the very opposite occurred. The worse things got, the more Alexandra came to rely on Rasputin's judgment. In the summer of 1915, with World War One killing millions of young Russian lads, Tsar Nicholas decided to leave the capital and assume command of the Russian army, leaving the gov­ernment in Alexandra's hands. The German-born Tsarina loved Russia, but didn’t know the first thing about government and was blinded by her belief in Rasputin. For a year toward the end of the Romanov dyn­asty, and with the Tsarina’s active consent, Rasputin was said to be the de facto power behind the throne. And since the Tsarina herself was German-born, people were even more suspicious of her and of Rasputin’s influence.

Welch noted many assassination attempts on Rasputin… yet as if by magic he did not die. Only in December 1916 did two young pro-monarchy aristocrats, both relatives of the Tsar, succeed in finally killing Rasputin (by poison, gunshots and drowning). Just two months later, crowds took to the streets of St Petersburg; following the February Revolution of 1917, Tsar Nicholas was forced to abdicate. Soon the Bolsheviks took over and nothing could save the oppressive Imperial Family or the corrupt aristocracy.

Welch’s final task was to decide how much Rasputin was to blame for everything that was decadent, corrupt and remote about the royal family and its court. She believed Rasputin's role in the downfall of the tsarist regime was indisputable, especially when it was wrongly rumoured across the nation that the monk was both shaping Russian policy during WW1 and shagging the Empress. Without him, wrote Alexander Kerensky, the leader of the first of the two Russian revolutions of 1917, “there would have been no Lenin”.

But it was The Revolut­ion of 1905 that was the beginning of the end for the Romanovs, before Ras­putin came to court. There was a unstoppable wave of mass politic­al and social unrest that spread through the enormous Russian Empire - worker strikes, misery for the peasants, military mutinies, the establishment of the parliament and the Russian Constitution of 1906. Tsar Nicholas might not have understood what was happening, but most other people in Russia did.

A postscript. When the imperial family members were murdered in Yekaterinburg in 1918, the Tsarina and four young Grand Duchesses were found to be wearing amulets containing miniature portraits of “Our Friend”, Rasputin.

We visited the Rasputin Bar in Singapore for wild Russian music, dance and drinks. So Rasputin is a name associated with fun, at least for some people.

you are right... a given history has many different interpretations. But in this case, I believe the bar in Singapore was going for the alcoholic and sexually debauched reputation, not a fun-based reputation.

Why did the Russian Orthodox Church not try to shut their monk down? Or did they try?

Hello Hels, In singer Blanche Arral's autobiography, she mentions that when she was touring Russia, she met Rasputin and was terrified of him. (I tried to look up what else she said about him, but cannot locate the volume right now.)

As a privileged and fêted star, Arral met much of the aristocracy, and even married a nobleman, so she offers an unusual viewpoint of the Russian court at that time.
--Jim

I have seen very mixed responses to that question.

On one hand, the Russian Orthodox Church did not consider Rasputin a real monk and so The Holy Synod felt free to attack his debauchery. On the other hand, the Orthodox Church was very conservative and wanted Rasputin to strengthen the royal family. Only thus would the working classes not be able to bring on the revolution.

what a great story. It seemed that Blanche really enjoyed living in Tsarist Russia and hobnobbing with the Russian aristocracy. In fact, as you say, she married a Russian prince.

I wonder if her view of Rasputin and his presence at court would have been very different from Frances Welch's.

What a fascinating post! Perhaps my favourite of all your posts. I love the story of Rasputin and was glad to read your factual account. The last version I read was a Sherlock Holmes / vampire mashup that painted Rasputin as an evil vampire and the prince as his source of food, cured only of his hemaphilia when he was made a vampire too.

I wish it WAS my account :) Rasputin: A Short Life by Frances Welch was well worth reading. My only disagreement with the author was in the last paragraph about Rasputin's role in ending Tsarist rule.

I see what you mean about having done your research, very thorough and a great read! I love history in general and have a keen in interest in Genghis Khan!

Thank you for visiting :) Some histories are difficult to locate because the host nation is too humiliated to release the information. Or because Hollywood films have glamourised one version of that history, at the expense of a proper examination.

Confessions of a Ci-Devant recommends the book Four Sisters: The Lost Lives of the Romanov Grand Duchesses by Helen Rappaport (published by Macmillan in 2014.) Alexandra and Rasputin had important roles in this history.

There were five main men who, pushed to the edge of desperation, formed a conspiracy to finally end Rasputin's horrible life: