Garden bridge over the Thames

The revival of the Thames’ South Bank over the past two decades has created a vibrant and artistic district attracting large number of visitors to its art galleries, theatres, music halls, restaurants and outdoor entertainment. However visits to Temple and the north bank area east of Somerset House and Waterloo Bridge are far less freq­uent. Thomas Heatherwick has shown that a new London bridge could grow and nourish the infrastructure connection between these distinct areas, whilst providing new walking routes to and from Covent Garden and Soho.

The Hanging Garden of London refers to a pedestrians’ Garden Bridge that is planned to span the River Thames in London. The allusion to the Hanging Gardens of Babylon may be slightly exaggerated since Babylon’s treasure was once one of the Seven Wonders of the Ancient World.

Conceived in 1998 but not yet funded or approved, the Garden Bridge will feature trees, gard­ens and walking parths. Costing perhaps £60–£100 million, the bridge will 367 metres long and 30 ms wide. It will link the the south bank of the Thames to Temple tube station on the north side. Horticulturalist Dan Pearson will design the planting scheme.

The bridge’s designer, Thomas Heatherwick, believes that Londoners’ experience of their river has been marginalised by successive transport moves. So the designers need to explore the relationships between cities and nature, and the significance of plants to human health, economic success and social change. And not just for locals; presumably the scheme would increase visitor numbers to London. 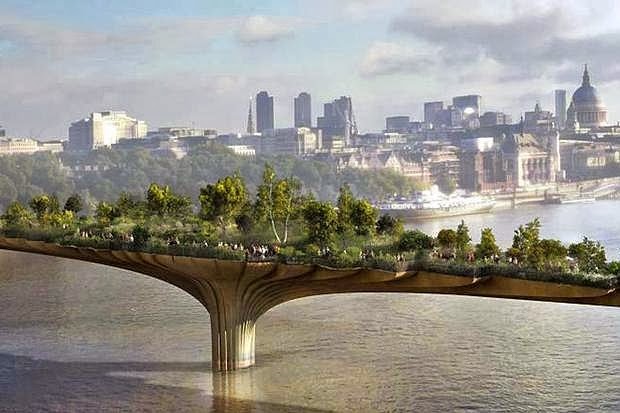 London’s city workers would be encouraged to take their sandwiches to the new bridge, to sit on benches or to walk down the garden paths. Only thus can the vitality of green space in urban landscapes and the signif­ic­ance of them for human health and well-being be reinforced.

A comparison is always made to the High Line in New York. Originally built in 1929, the railway line was raised high above the ground and used to safely transport freight along the Westside waterfront. Its main users were the warehouses and markets in Manhattan’s Meatpacking Dist­rict. But by 1980 the line was not used any more and lay neglected and derelict for decades.


In 2004, the New York City government committed itself to est­ab­lish a park on this old, disused transport line. A design competit­ion, that attracted 720 entries from 36 countries, came up with plans that included high-flying pools, wetlands, outdoor art projects, bicycle paths and nature trails. 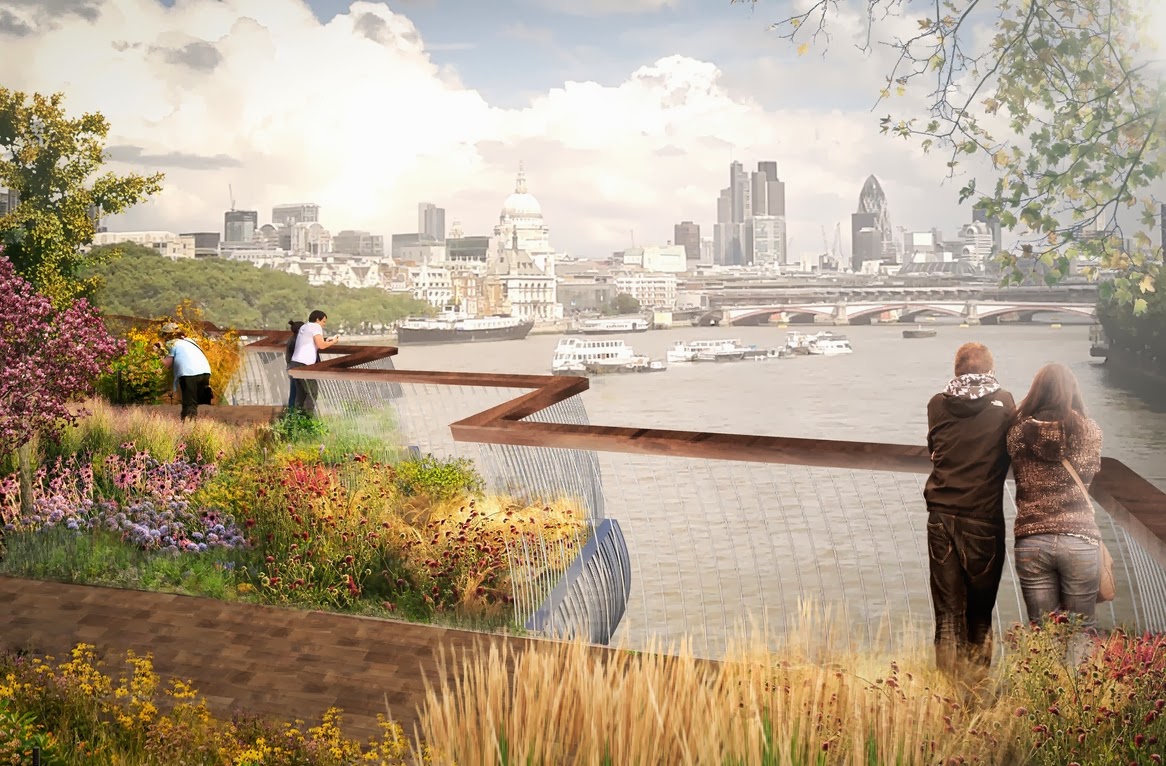 In April 2006, New York’s mayor ceremonially marked the beginning of construction on the High Line project, turning it into an elevated park. In June 2011 a ceremony was held to open the High Line second section, from 20th-30th Streets. At a cost of $152.3 million for the two sections so far, a natural oasis had been created in an urban city.

**
I'm all in favour of a garden bridge over the Thames, but there is a very important difference between the London & New York projects. Having an elevated urban park that connected New York’s neighbourhoods and provided a sense of place was a unique, transformative public experience. It was considered a radical demon­stration of people power and local planning, based on the idea that an open space could be at the heart of neighbourhood revital­is­ation. As a result, the High Line has been embraced by New York and is now an integral part of that city’s contemporary culture.

London is not trying to revitalise an existing piece of infrast­ruc­ture that has been neglected for decades. Nor will London’s Garden Bridge utilise or demonstrate people power. Rather the brand new bridge will offer gor­geous green spaces, clean air and fabulous river views in the centre of a very busy metropolis. So the question remains: can we realist­ically expect that the Garden Bridge will become an integral part of London’s contemporary culture? 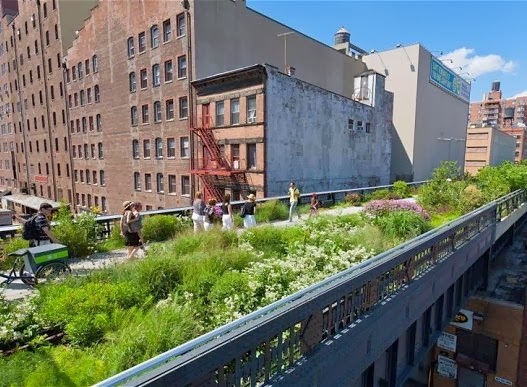 Locals and visitors are loving the completed High Line,
high above Manhattan streets in New York.

Clearly other cities are now interested in the concept of a garden bridge. The Reading Viaduct in Philadelphia is a hulking century-old masonry and steel railroad trestle, runs for ten blocks north of Centre City. Abandoned since 1984, the viaduct has long been overrun by weeds and rubbish. But now there is growing interest in redeveloping the railway into an elevated park. The success of High Line in New York, in terms of number of visitors and of private investment moneys, has prompted Philadelphia to explore its own rails-to-park proposal. The co-founder of the Reading Viaduct Project says it could connect several neighbourhoods. She believes that redeveloping the Viaduct would be far less expensive than the $50 million it would cost to demolish it. And it should rejuvenate surrounding neighbourhoods. 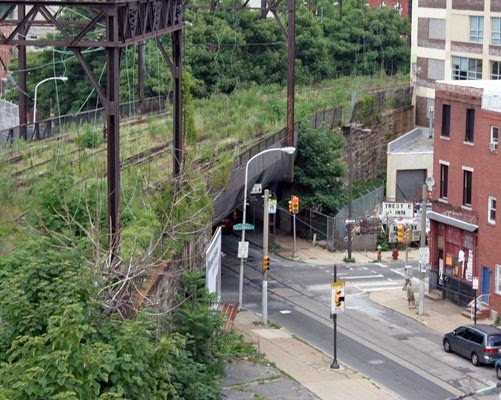 Hello:
At the risk of swimming against the tide [and no pun is intended] we rather think that this particular use of, in all probability, public money is somewhat misdirected. The comparisons which you make, or lack of them, with New York rather support this we feel. Furthermore, vast tracts of London remain in urgent need of regeneration which, if carried out, might conceivably improve the living conditions of those who are possibly more disadvantaged than those who will enjoy lunchtime sandwiches on the new bridge.

Hello Hels, While I can see interesting possibilities in this surrealish park plan, I wonder how necessary it really is. Perhaps creating new land by building over the Thames, which this plan essentially does, will set a bad precedent for all kinds of nightmarish developments in the future. This is one project that I would not rush to go ahead with.

The trend is catching on. Look at Philadelphia.

Re the Reading Viaduct Elevated Park project, the City District has commissioned a design study for what could be the first phase of the elevated park on a viaduct. The first section of the Viaduct is not long, but the designs are nothing less than transformative. The park designs include a bunch of amenities like new trees and plantings, an outdoor classroom, seating, swings and more.

That would be amazing. I was on the High Line in January. Not the best time to visit a garden but it was still an oasis running through the craziness of New York. I can only imagine how beautiful it is in Spring, Summer and Autumn.

I don't think the Garden Bridge ever, in its designers' wildest dreams, hoped to regenerate disasvantaged parts of London. I doubt that it will even provide serious infrastructure between the two banks of the river.

So the question has to be "is that amount of public money worth spending on a) bringing thousands of extra tourists into the city and b) giving city workers fresh greenery and stunning views?"

The project has been very carefully designed and won't spin off any nightnarish developments in the future. But your question about the _necessity_ of the Garden Bridge is a good one.

I am reading lots of letters to newspaper editors and they seemed to be equally divided between positive and negative responses.

I had never heard of the trend towards high viaducts being converted to garden oases in big cities, until visiting High Line in New York. Now a number of similar projects are being mooted.

Thank you for the reference to Philadelphia. If I can find a photo, I would love to add it to the post.

I would never visit the northern hemisphere in their winter, unless it was a desperate emergency (eg a niece's wedding). That said, High Line is very impressive, isn't it?

Hels you are right. London in January is minus 6 degrees Centigrade and ears turn blue, and it is dark at 1PM, New York city in January has layers of litter frozen into snow with footways cut through that feel like one is walking through an aspic terrine.

Peopl want plants in the sky. Search "Coutts Skyline Garden" and see 5-star chefs harvest everything they need for the restaurant and executive dining room.
Also search (London rooftop vegetables) and see all the other massive plantings in the sky.

I too work in a concrete jungle and get desperate for the sight of a park, river, port, beach or field. Yes yes yes! Plants in the sky is a rather radical response, but I understand it absolutely.