Classical concerts in a Nazi camp

A short film has just come out in time for the Jewish Film Festival called The Lady in Number 6. The summary was follows. “This is a film about the remarkable Alice Herz-Sommer, a renowned concert pianist, a distinguished music scholar and, at 109, the oldest Holocaust survivor in the world. Alice is clear-eyed, witty and above all, joyful as she shares with us the details of her remarkable life and how music saved her”. Canada-USA-UK, 2013, documentary, director Malcolm Clarke.

I was fascinated because Alice was Czech (my favourite nationality) and lived in London (my favourite city) and because three generations of her family made their life surrounded by music and literature (along with art, my favourite cultural worlds).

Alice Herz was born in Prague in 1903, then in the Austro-Hungarian Empire, to a merchant father  and a mother who moved in a literary world. As a child she learned piano and eventually studied at the prestigious Prague German Conservatory of Music. Mother introduced young Alice to Gustav Mahler (d1911)  briefly and to Franz Kafka very often - apparently she enjoyed playing Beethoven and Chopin for Kafka’s pleasure. And she performed in concerts throughout her young career with the Czech Philharmonic Orchestra, particularly enjoying Schumann’s music.

Alice married Leopold Sommer in 1931, another music buff, and life was good.

Then catastrophe occurred. In 1938 the Germans annexed just the Sud­et­enland part of Czechoslovakia but in March 1939, the Germans took over the rest of Czechoslovakia. After the invasion, Jewish families knew they had to escape while they could. But for some reason to do with family members, Alice Herz-Sommer remained in Prague. (My Czech inlaws escaped to Budapest, but that proved to be no safe haven either).

By July 1943, the end was in sight. Alice, Leopold, their young son and her elderly mother were deported to Theresienstadt camp in Terezin Czechoslovakia. This was a transit camp en route to the extermination camps in other countries. Alice and the son were not further deported and so they survived; her husband and mother were sent on to Auschwitz and did not survive. 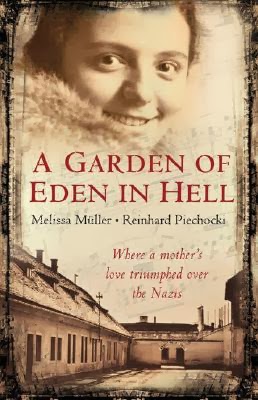 Mueller, Melissa & Reinhard Piechocki: A Garden of Eden in Hell: The Life of Alice Herz-Sommer (McMillan 2008).

Nick Reed interviewed Alice who told with great passion of playing along with other musicians in 100 concerts inside Theresienstadt. She likened that experience, both for the perf­ormers and their imprisoned audience, as being close to the divine. Alice was clear that music preserved her sanity and her life – while bringing hope into the lives of countless others. What the interview did not reveal was why the Theresienstadt guards allowed music to be played, who provided the instruments, where the sheet music came from and why other prisoners were allowed to participate in the concerts.

Ed Vulliamy explained this bizarre environment.  All Nazi camps were diabolical, but Terezín was redemptive, at first. It was the place in which Jews of Czechosl­ovakia were concentrated, especially the intelligentsia and prominent artistic figures. And, in time, members of the Jewish cultural elites from across Europe were brought to Terezin, prior to transportation to the gas chambers.

And as a result – despite the cruelty, rampant fatal disease, malnutrition, paltry rations, cramped conditions and death – Terezín was hallmarked by a thriving cultural life: painting and drawing, theatre and cabarets, lectures and schooling, and, above all, great music. Among the inmates was a star pupil of Leoš Janáček; plus there were four composers of note, including one of the most promising composers from the circle of Arnold Schoenberg, Viktor Ullmann. Each prisoner had been allowed to bring luggage and many of them had smuggled in musical instruments, even though it had been forbidden for Jews to own them. No wonder the beauty of music and art bloomed in that real-life hell.

So clever was the plan to calm the fears of Prague's Jews that the Nazis eventually presented Terezín as "the Fuhrer's gift to the Jews”. This model camp, where they really did permit the performance of serious and cabaret-style music, theatrical performances and soccer teams, would be a place where the Red Cross representatives were allowed to visit.

Viktor Ullmann wrote some of the most important music; amazingly some of his sheet music survived. Additionally Edna Mor discovered that among the pieces Alice played in the camp were Chopin's Etudes. The so called "Revolutionary Study" must have acquired a very special meaning in that horrible place. The film's conclusion was clear. It has often been said that fear and hatred eat the soul,  but conversely it can also be argued that love,.. of life, of family, of music.. can nourish the soul and liberate the spirit.

Alice and her son returned to Prague after being liberated by the Soviet Army in mid 1945, but no-one from her pre-war world was there. Her flat had been confiscated by the Nazis and given to a Christian family. In 1949 Alice migrated to Israel, working as a music teacher in Jerusalem.

She emigrated to the UK in 1986 where her son became a professional musician in his own right. Herz-Sommer died peacefully in London in February 2014, aged 110.

We had previously read something of this incredible story to which this post adds to our knowledge in the way of additional detail and information. Will one ever really comprehend the true horror of these camps?

Regarding your comment on my blog. The School of Arts in those days was really a School of Industrial Arts where men went to learn their trade eg. carpenter, electrician, plumber etc. It was basically what a Technical and Further Education (TAFE) College is today.

Hello Hels, Somehow this story is even more depressing and horrifying than many other Holocaust incidents. They knew how much these people had contributed to society, and rewarded them with a temporary stay in a "premium" prison camp before being shipped off to death.

Viewed another way, this shows how the Nazis denied yet another layer of humanity to those not regarded as special and sent directly to the death camps.

Agreed. Now that the generation of survivors has all but died of old age, historians will increasingly have to rely on testimonies of people like Alice Herz Sommer. It is worth seeing the film. Especially if you like classical music.

nod. I assumed it was a Mechanics Institute, just like some of the old buildings still dotting the Victorian country side. Brilliant concept!

We tend to think of Nazis as brutish and uneducated. Not at all. They included some of the finest patrons of art, music, literature and architecture (as long as it wasn't Degenerate). So many senior Nazis had a good eye for selecting which prisoners to save.

Only one thing irritates me about the concept of music nourishing the soul and liberating the spirit. That is that life and death were _totally random_. Had Alice and her son been in one queue and not the other, she would have been sent to the extermination camp. Surviving was an utter fluke.

Did the Nazis present Terezín as the Fuhrer's gift to the Jews as cynical propaganda to fool Red Cross and calm Pragues’ terrified Jews? Or was it clever utilisation by the Nazis of educated and acculturated Jewish prisoners? Read "Hitler's gift: the story of Theresienstadt", written by George E. Berkley and published by Branden Books in 1993

Alice died on 23rd February. She used to say that 'The world is wonderful. It is full of beauty and full of miracles'. It is, and Alice was one of those beautiful miracles.

many thanks. I have added a line to the post.

What a life! Rest in peace, Alice.

Just a fortnight after I wrote the post and a week after Alice Herz Sommer past away, "The Lady in Number 6: Music Saved My Life" won the following prestigious award:

I'm so glad this won. Sad she passed last week. Thankfully her story is now immortalized in film.

timing is everything! Imagine if the producer hadn't raised enough money by 2013 or the director was still busy on another project.

This film was protected from above, I think :)

not just the NAZI Germans, or Austrian Adolf, but the Russians were pretty evil too. Their arts intelligentsia had already fled to Paris in 1920. I have just read 2 books by the daughter of Josef Stalin and he was able to eliminate close members of his own family without a second thought. Do we all have this capacity within us?
I know I could really enjoy hurting anyone who maliciously harmed an animal or child.
Right now Australia - the country that was made by people fleeing The Potato Famine and the vicious Highland Clearances by the English, just turns it's National Back on the many sad people who just want to live where nobody shoots at them. Hypocrisy is rampant everywhere.

The question of turning away desperate refugees and asylum seekers in small leaky boats makes me ashamed of being Australian. Everyone I know is either the child or grandchild of a refugee; in fact Australia used to actively recruit new immigrants (as long as they were "suitable").

For an important petition on saving refugees, see "Asylum seekers and refugees - Australia's future? or our destroyers?"
http://melbourneblogger.blogspot.com.au/2011/03/asylum-seekers-and-refugees-australias.html