Many thanks for the following article (14/12/13), courtesy of The Age and its writer Jamie Lafferty. I have added my own comments below Jamie Lafferty’s report.

We start in the newly constructed Kinsei Lounge at Hakata Station where the Japanese national television station NHK has an enormous camera covering the maiden voyage of Nanatsuboshi/Seven Stars, a new luxury sleeper train that tours around the western Japanese island of Kyushu. Its arrival is the biggest rail event to happen on the island since the 2004 launch of the shinkansen/bullet train. But this new train could hardly be more different.

The emphasis now is on taking time, absorbing the history and culture of Kyushu, if only for a few days. So where the Shinkansen/Bullet Train can speed from Hakata Station Fukuoka City in the north of the island to Kago­shima in the extreme south in less than two hours, the Seven Stars takes four days to do the round trip, taking in all seven of Kyushu's prefectures along the way. Where the bullet train lets commuters catch a brief nap between destinations, the seven carriages of the new luxury train share 14 suites, each with a different design, all fitted with en suite bathrooms and petite twin beds.


At one end there's a bar and restaurant car; at the other, two luxury suites share the final carriage. The very last of these is the most expensive, offering sensational views through the rear, all-glass wall. This suite will no doubt go on to host the Great and the Good, but for its maiden voyage, it hosts neither dignitaries, nor VIPs. 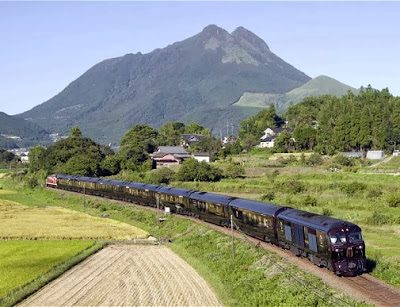 The European journalists, the first official Seven Stars passengers, were here to cover its unveiling. This is strange for a number of reasons, not least because of the Japanese national press covering our departure. There are several reasons for JR Kyushu not entertain­ing the native media. Chief among these is that domestic demand was so enormous there was simply no need - every ticket on board every journey for the Seven Stars' first six months has already been sold and could have done so nine times over.

We have only found ourselves on board because company president Koji Karaike wants to promote his new baby to Westerners, as though their approval will validate his ambitious $30 million project. From April 2014, the train company will reserve two of the 14 suites for non-Japanese guests. Without this amendment, it would have taken years for foreigners to get on board. How has it been so wildly popular? Well for some Japanese, to be seen spending money is exceedingly important. This is a country that has more than $10 trillion of debt, twice its GDP. So financial doom, a falling population, unending economic pressure from China - what of them? There's a new, expensive train to ride? Great. President Karaike had wanted to build the Seven Stars for 25 years and within months of becoming president of JR Kyushu, he commissioned designer Eiji Mitooka to make it a reality. The result is a gorgeous wine-coloured train with gold emblems, the kind of thing that draws a crowd.

Now Koji Karaike's guests have the choice between a fleeting two-day, one-night course that stays in the north of the island, and a longer, 4 day course, with two nights on the train and one in a ryokan/­traditional Japanese inn in Kagoshima prefecture. While the train doesn't go anywhere in a hurry, it doesn't spend too much time at any of its scheduled stops either. Japanese tourists are used to such brevity, but it may feel a little frustrating for foreign guests.

Take Nagasaki in the west of Kyushu, a city that's impossible to cover in a day, let alone in a few hectic hours. It was here in 1597 that 26 Christians were crucified as Japan moved towards its isolat­ionist Sakoku period; but it was here too that the Dutch were allowed to trade when all other nationalities were forbidden. But for most people, Nagasaki is most famous for the apocalyptic horror of August 1945 when the atomic bomb Fat Man was dropped, killing and maiming thousands, razing much of the city.

Curiously, though, none of those things are covered when visiting on the Seven Stars. Instead, the focus is largely on visiting Glover Gardens, former home of the Scottish industrialist Thomas Blake Glover, who helped revolutionise Japan when it finally reopened its doors to foreigners in the late C19th. High on a slope above Nag­as­aki's famous harbour, its views are unrivalled, the ornamental garden perfect. Presumably tourists, especially Japanese tourists who will always be the majority on Seven Stars, prefer this to ugly history.

Really, though, the excursions are little more than fillers between stints on the train. On board, guests eat the finest cuisine Kyushu Island has to offer and watch the island trundle past the window. Everything in the train is immaculate, the attention to detail is sensational. The staff are handsomely turned out at all hours of the day, genuine­ly keen to help when they can, none more so than the violinist and pianist duo. They take requests ahead of the journey, practise, then perform on board. 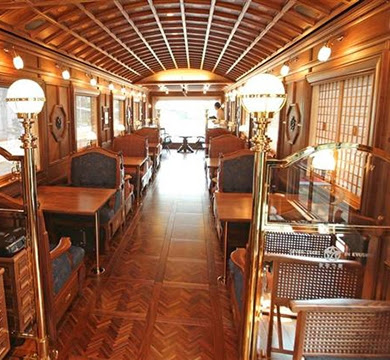 Bookings for foreign guests are now open, with the first spaces available in April 2014. Prices start from £970 each based on two sharing with all meals included. With a year's notice, the entire train can be booked for up to 30 people, with prices dependent on route and duration. More details are available on line in (bad) English.

But a much bigger problem needs to be addressed. It costs most would-be travellers a great deal of money to get themselves to Japan where they want to see everything!!! Two and four day trips, with most of the time spent on board, don’t meet the needs of curious, educated tourists. That each cabin has a shower and a toilet with washbasins made of locally produced Arita porcelain is wonderful; I love porcelain and I love craftwork related to the community we are visiting. I am also sure the mixed-wood panelling in the carriages is sublime, the stops at hot springs are refreshing and the food is the best in Japan. But I could do that in Switzerland. Or Banff in Canada.

I want to know who lives in this southern rural island of Kyushu, what agriculture or industry do they live off, what religions do they practise, what history have they experienced, what architecture do they select? If that takes 7 days instead of 2 or 4, so be it! If trains have to depart more frequently and the price goes up, trav­el­lers will understand. If more carriages have to be added for each trip, it won’t reduce the passengers’ sense of exclusivity. 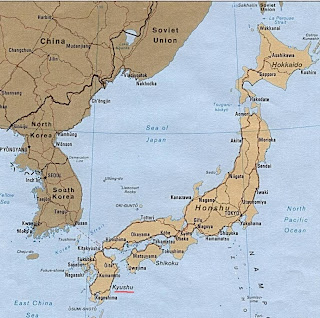 Kyushu is the southernmost large island

A similar problem was noted in the post about The Ghan, luxury train travel between Adelaide and Darwin. The Ghan has only two set stops en route, Alice Springs and Catherine, and each for only four hours. I would have liked half day stops in both Coober Pedy and Uluru, thus extending the two nights on board to at least three.

I agree with you but I think the average passenger profile is probably not so interested in history and culture. I also guess that JR know what makes money very well and that is what a private company is about.

Sad for the likes of you and to a lesser extent me, but it is the way of the world.

Now, off to have a good look at the train. I hadn't heard about it.

I have added a link to our own Ghan, to support your view that private, money-making enterprises know their market in all countries.

Very frustrating for cultural tourists, but since they haven't elongated their scheduling, the Company must be right and I must be wrong.

Will you add a map of Japan please since it will help to establish where Kyushu is, in relation to the other islands. It might also show why the Company selected the less populous Kyushu for their new railway service.

"Why Kyushu" is an interesting question. Japan's population is c128 million, with 80% of the population living on Honshu.

Kyushu Island is the most mountainous, has stunning harbours and has the most interesting mud hot springs in Japan. So perhaps the decision was based solely on scenery.

This is really interesting and your points equally so. I've always dreamed about taking a train journey like this, especially through America or South Africa but I imagined you go for the scenery and the journey, not necessarily to learn much about the places you're travelling through. Still, this sounds great - I'd definitely love to go on a journey like this.

you are quite right in pointing out that every luxury train traveller has his/her own personal reason for getting on the train. For me it might be historical sites; for you it might be the scenery; in Canada the travellers were passionate about spotting the mountain animals. The train even stopped to a crawl, so people could take photos.

I have set myself the goal of going on every long distance luxury train trip in the world. Sofar I can thoroughly recommend this sort of holiday to you :)

It's all Agatha Christie's fault. We imagine the Venice-Simplon with beautifully behaved and dressed travellers, and we get jeans and rich Japanese children which are the worst experience. Thanks for those links, off I go.
Happy Trails to you

The Age article had a link to an all Japanese site but I am proud to say I stumbled around intuitively till I got to a page with an ENGLISH option and then found this link with images.
It also says "we are grateful for this beautiful place" which is more than we get from Vline.

always expect the unexpected from the other passengers. My father had a travel agency and had cheap flights in first class on Aeroflot. He soon got used to shooing the chickens out of his seat in every plane he flew on :)

Your link is an excellent one. Thanks.

Very informative. We are living in Japan and take the Shinkansen often for pragmatism but this sounds like a lovely trip just for the fun of it. Thanks for sharing.

*nod* I absolutely understand the difference - the pragmatic response is to get business done as efficiently as possible; the fun response is for leisurely and informative cultural tourism.

This is very interesting. Thanks for this. This is very informative. I find it interesting to know more about the luxury options and the elaborate train system. In my opinion, travelling by train is not really about reaching the destination, but about the comfort and experience. Maybe you can try looking into their private luxury jet offers as well. :D
Shawn Holstein

I agree. If you cannot see the countryside you are passing through and meet the locals en route, you may as well be in a hermetically sealed plane.

As long as there is a full day to enjoy each town en route! I hate being rushed.