The Red Lion Brewery is a new book written by Victoria Hutchings, to be published by Calder Walker Associates in late 2013. The publishers say the book provides a history of the Red Lion Brewery, estab­lish­ed in the C16th, and owned for over 100 years by the bank­ers Hoare's from 1802-1933. Although the name Red Lion Brewery was chang­ed to Hoare and Co in 1924, it remains as one of Britain’s oldest brew­eries and pioneered many brewing developments. Note that Hoare and Co, brewers of Wapping, acquired 11 public houses throughout Britain’s south east, at the same time. The book is meticulously researched from inside the family archives and from Hoare's Bank.


So let us go back to 1802 when the brewery came into the hands of the Hoare family. Since that time, the business has passed down from one generation of the family to the next without outside intervention. The Red Lion Brewery must have been enormous, consisting of a large range of buildings facing the River Thames, and covering 3 acres.

Red Lion Brewery and shot tower, from the Thames River

Note the lion above the roof line. Image credit: Dictionary of Victorian London

The malthouse was the oldest part of the complex, displaying thick crossbeams and joists, and old staircases with broad landings. Like many other London breweries, the Red Lion Brewery was supplied with the purest water by means of a deep well. This well had a diameter of 5’ to the depth of 100’, below which it was carried by two bore-holes 300’ down to the chalk. A further supply of water was obtained from the London Clay by their lesser wells i.e those that were only used in summer when the Thames water was not cold enough for supplying the refrigerators. The peculiar flavour of dark Porter Beer gave rise to an opinion that only Thames water could produce good Porter.

The main building facing the river was of five storeys built in brick, with stucco work on the river and back elevations. The river front had Roman Doric columns which extended through the upper floors and carried an entablature. The podium, which extended below the wings at each side, had recessed semicircular headed windows and doorways. Above the entablature was a lion made of Coade stone which stood on a substantial base incised BREWERY. This lion statue could clearly be seen on both sides of the Thames.

The rear elevation also had a rusticated podium with a slight projection at the centre. This projection had coupled Doric pilasters supporting a pediment. The roof of the main building was designed to act as a large shallow tank for the storage of water. It was formed of cast-iron plates, which extended up to form parapets. The street and courtyard elevations of the subsidiary buildings and the arched entrance from Belvedere Road were also stuccoed. The buildings, all with cornices below the parapets, were of three storeys. 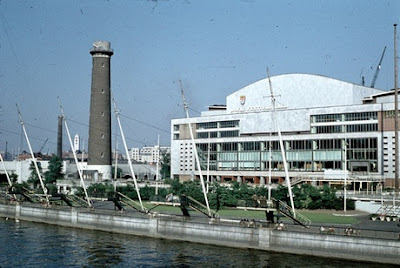 Royal Festival Hall and shot tower, opened 1951
Photo taken from the same vantage point across the Thames.
Only the tower remained in place.

Red Lion’s buildings ceased to be used as a brewery in 1924 but were not demolished until 1949, to prepare the South Bank site of the 1951 Festival of Britain. In the mid 1950s the stone lion was saved and placed outside Waterloo station on a high plinth, then painted red as the sym­bol of British Rail. Initials of the sculptor William Wooding­ton and the 1837 date were accidentally discovered under one of its paws. Later the red paint was stripped off to reveal the fine Coade stone surface below. In 1966, the statue was moved from to its current location on Westminster Bridge, and has since been protected by British Heritage.

The Shot Tower, which you can see in the first two images, was to create the shot needed for projectiles in weapons and had nothing to do with beer. Used for its purpose from 1826 until 1949, the shot tower might have gone the way of the brewery before the 1951 Festival of Britain. But it was kept as a Thames landmark for Festival goers and was not demolished until 1967, to make way for the Queen Elizabeth Hall.

The Red Lion Hotel, set at the foot of the Henley Bridge, also over­looks the River Thames. Emerging in the 16th century as a coaching inn on the road between London and Oxford, the hotel has been offering beer-based hospitality for many centuries. The brick façade was added in Georgian times. Alterations in 1889 included the addition of a porch on which a red lion was placed.

Many of the hotel rooms are identified by the names important people who, at some stage in the hotel’s history, used those rooms. Dr Samuel Johnson and Mr James Boswell stayed there in 1776. King George II was a frequent visitor to Henley and was familiar with the Red Lion from his boyhood days. He certainly visited in 1788, accompanied by Queen Charlotte and two princesses. The Prince Regent, later King George IV, was another visitor. 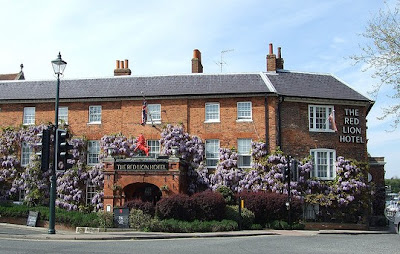 Readers might enjoy reading "The Lambeth Waterworks and the Lion Brewery", in British History On Line.

Your blog layout is extremely ugly and unaesthetic, maybe you should change it before saying anyhting further about art...

Thank you for the critique. What is your favourite area of art?

Take no notice, Braun's blog is a bit of a dogs breakfast, more the disparate peripatetic ramblings of someone who has too high an opinion of himself.

Thank you. Most commenters are very specific in their corrections or suggestions eg " Waddesdon Manor might have had French looking architecture, but I think you will find that the landscaping was much more in the English taste".

At least then I can either change the views expressed in the post, or I can marsall evidence to support my original position. Sometimes errors can actually produce a useful dialogue.

But "extremely ugly layout" is not very helpful.

thank you. I presume you are responding to the post on European town planning in Chandigarh. I will follow up your reference.

Hello Hels, What an amazing brewery that must have been, with so many fine architectural details. It's too bad it had to be sacrificed, even for the Festival of Britain.

I had missed your earlier post on the festival; you probably are familiar with the Noel Coward's satirical song, Don't Make Fun of the Festival.

P.S. I have been introduced to so much beauty through your blog, from red-painted lion carvings to more traditional art to the beauty inherent in noble thoughts and actions that you feature so frequently. --Jim

I think you hit the nail on the head. When should an important old building be renovated and re-purposed? And when has it been so badly neglected that it should be razed to the ground and rebuilt?

Since probably none of us have seen the inside of the Red Lion Brewery before demolition and there don't seem to be any interior photos around, there is no right answer in this case. But _in general_ I would vote for renovation and re-purposing, not demolition.

This is not red lion brewery

You are correct. The brewery ceased operating in 1924.