The German Colony in Jerusalem was established by members of the Tem­ple Society which was founded in Germany in 1858. They soon moved to Pal­estine to escape religious persecution at home, and to put their religious beliefs into practice: that is, to establish colonies in the Holy Land where they could prepare for Messianic salvation.

The idea to build a railway linking the coast with the Jerusalem was first raised by Dr Conrad Schick, a German archaeologist-architect-city engineer who had been part of the German community in Jerus­al­em. It was considered a great idea, so French engineers went ahead and conducted an extensive survey in 1874–75. This was a truly co­op­erative project between Catholic French, Protestant Germans, Jewish Jerusalemites and Muslim Ottomans.

The man who in 1885 won the franchise from the Ottoman government to construct the railroad was Joseph Navon, a Jewish banker who lived in Jerusalem. Navon had spent three years in Constantinople to pro­mote the project and to obtain a permit from the Ottoman auth­or­ities. His chief partners were Ottomans and Greeks, in conjunction with mostly French investors. Yet due to financial difficulties, he had to sell the franchise to a French company, Société du Chemin de Fer Ottoman de Jaffa à Jérusalem. 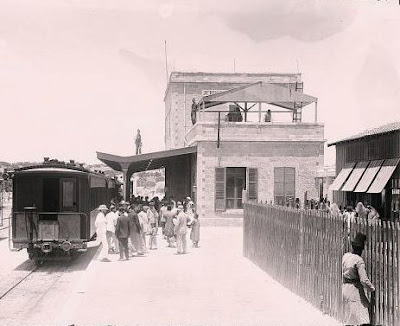 The railway was the largest civil engineering project in Palestine at the time, using local and Egyptian labourers. The original Jerusalem station was a symmetrical Turkish-Templer st­ruct­ure containing the station offices, ticket hall and a concourse – two storeys high in the centre and one storey high on each of the two wings. The original building was identical to the Jaffa Railway Station (see photo below) which had been built in 1891, except that Jerusalem used limestone and Jaffa used the local sandstone. Perhaps both of these stations were also similar to the Sirkeci Terminal in Istanbul that had been built in 1890.

Israel might be the narrowest country on the planet, but it had once taken donkeys hours to travel from Jaffa on the Mediterranean Sea to the hills of Jerusalem. Once the Jerusalem station was ready September 1892, the first train arrived from Jaffa in the presence of enormous crowds and every important and unimportant official in the entire city. The train brought the two sides of the country, and the two centres of population, closer together.

The triangular arches on the roof of the first floor, on both sides of the ticket hall, were built in early 1920s by the British-run Palestine Railway, who managed the railway during the British Mandate of Palestine. The building underwent many renovations over the years, but its basic shape has not changed since 1920.

The station operated almost continuously until 1948, when traffic stopped on the Jaffa–Jerusalem line due to the 1948 Arab–Israeli War. Following an armistice agreement, it was agreed that Jordan would hand the control of the railway back to Israel, in order to enable Israel Railways to service Jerusalem once again. The service on the line resumed in August 1949. 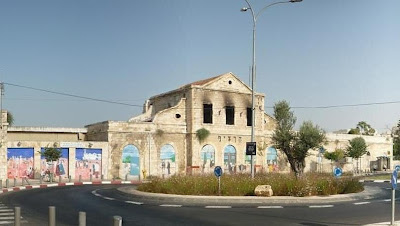 The old Jerusalem Railway Station, pre-renovation
Despite the tragic look, you can see the triangular arches that were added during the British Mandate.

In 1959 the railway tracks to Jerusalem underwent extensive ren­ov­at­ions, but the number of passengers using the line decreased in the 1960s, 70s and 80s. For most years until the line was finally closed, there was only once or twice daily service to Tel Aviv South Railway Station or Haifa Central Railway Station. During the 1990s, due to the inadequate level of work done on the tracks, there were many minor incidents. In August 1998 the last train service left the station which was then closed, presumably for ever. After its clos­ure, the station was sadly neglected.

A massive ($9.3 million) refurbishment was fin­an­ced by the Jerusalem Mun­icipality and the Jerusalem Development Authority, and in May 2013, this neglected heritage site reopened as The First Station. The railway lines have been covered over in gorgeous timber decking, food stalls, umbrella-topped vendor carts and a 7 ks bike path that links the station to the Train Track Park. Several restaurants and pubs have opened in the area, and an exhibition of historic photo­graphs can be viewed by visitors inside the building. The station is already hosting musical and other cultural events.

Many thanks to the First Station Homepage for the technical information. For a discussion on the role of the First Station combating relig­ious intolerance in Jerusalem, read Renee Ghert-Zand’s paper in The Jerusalem Report (9th Sep 2013). 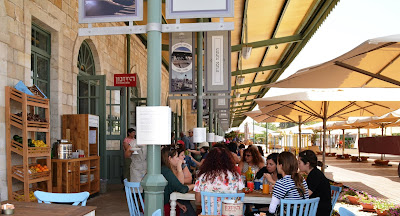 First Station Jerusalem, 2013
Outdoor restaurants
You can see where the rails were covered with timber decking
Photo credit: 100% Jerusalem 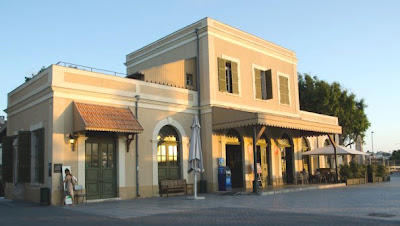 Jaffa railway station opened in 1891 and closed in 1948.
Recently Jaffa was also restored and converted to an entertainment-leisure venue called The Station.

I went on the old train to Jerusalem. A bit rattly and not very comfortable, but fast and direct.

Oh me too! I think people were so delighted to have modernity and speed in their transport system that they tolerated not having comfort.

I haven't eaten there (yet) but my son and his family agrees with you... the food at First Station is delicious. Next I want to hear if the music, dancing, photography and art are also great.

Thanks for this history.
I never did make it to HaTachana Harishonah.
But inspired by you, I just posted my pics of the construction from last April.

People know what they see in front of them and forget everything that went before. Thus your photos of the construction process will be really important, to remind people of Ottoman architecture, excitement about coming of the railways, whether the historical integrity of the old site was preserved or not...etc.