In the 1840s, according to Bobb Stagg (Gippsland Country Life 21, Summer 2012), the Church began making visits to the early settlers in Gippsland in Far Eastern Victoria. Itinerant ministers travelling on horseback held services wherever a meeting place was available. From time to time, mar­r­iages and christenings had to been postponed due to the non-arrival of the clergyman who was, for example, unable to cross flooded rivers.


Initially the visiting clergymen were Church of England, but in time, ministers of other denominations began to establish their circuits and the build­ing of new churches was proposed. A visiting clergyman was always assured of a warm reception by the local citizens, no matter which denomination he represented. 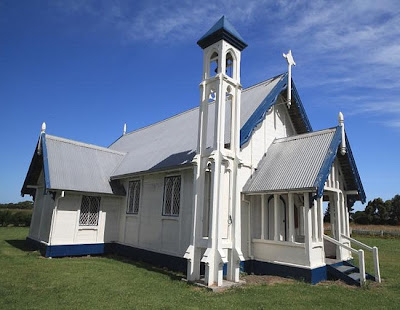 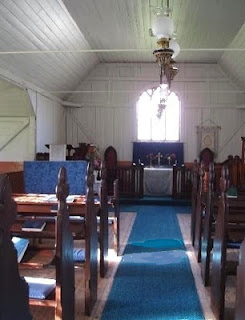 Of all the small towns in Gippsland, the first church was located in Tarraville. Why Tarraville, a town that 99% of Australians would not have heard of? With the establishment of Port Albert as an access point to Gippsland, the development of the neighbouring town of Tarraville looked set to boom. Today it is difficult to imagine that there was once a thriving small town in Tarraville, a town that had 5 hotels and wine bars, dozens of businesses and the largest permanent town population in the region.

The first resident minister to be appointed to the parish was Rev Willoughby Bean. Under the direction of local architects and sur­vey­ors John Pettit and George Hastings, Christ Church was built in 1856. Pettit and Hastings’ chosen style, Victorian Carpenter Gothic, was developed to showcase the skill of the builders AND to provide a relatively cheap alternative to brick or stone buildings.

The public buildings that were best suited to Victorian Carpenter Gothic were small churches and meeting halls, especially in the areas where budgets were very small and there was a growing need for places of worship. The style was most prevalent in places like Gippsland where wood was the most plentiful building material. Of course public acceptance of budget-built churches relied on the charm and quaintness of timber, replacing the authenticity of carved stone Gothic architecture.

Port Albert and Tarraville are 225 ks SE of Melbourne

In Tarraville they used local mountain ash and yellow stringy bark timbers, and did not use any nails. The roof was originally of wooden shingle; a galvanised iron roof has subsequently been laid over the original shingles.

Christ Church Tarraville continued to be used as a parish church until there were not enough parishioners and eventually there was no resident minister. So what went so sadly wrong with the growth plans for this part of South East Victoria? It seems that once the modern railway op­ened up from Melbourne to Sale in 1877, Sale boomed and Tarraville was by-passed. This lovely religious site now has Heritage Protection and so it is preserved and restored, but a heavy security grill inside the door means the visitor can only see down the nave from a distance.

Virtual Tourist records the impressive Victorian architecture still to be seen in Tarraville and Port Albert. For example, by the time the Gippsland gold rush made a major government investment in Port Albert-Palmerston necessary, most of the land within the township was in private hands. Two fascinating buildings from that time survive: Police Barracks and Gaol (1857) and Immigration Depot (1858).

By way of comparison, examine Christ Church in St Stephen, New Brunswick. This Canadian church was built only 7 years after the Gippsland church, and it shares many of the Carpenter Gothic elements. This wooden church remains as an example of the application of formal British Neo-Gothic theory developed by Britain's Ecclesiological Society to the design and construction of a vernacular wooden church in the colonies. Originally, Christ Church had the essential 90' Gothic tower attached to the front of the nave, but it fell during the 1869 hurricane. The chancel windows were designed by prominent English Gothicist, William Butterfield. 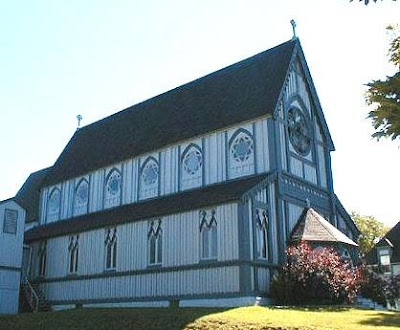 Visitors to St Stephen will note the exterior decorative detail including vertical board and batten panels, and elaborate barge boards featuring Gothic symbolic motifs. Along the length of the church, there is a combination of double lancet windows below and round, star-shaped motif windows in the clerestory above. Since stone was unavailable or unsuitable, local timbers were used throughout.

Travel Victoria is my favourite on-line tourist information service and it has excellent material on Sale, Yarram, Port Albert and other Gippsland towns. But I cannot find Tarraville.

nod... Travel Victoria is the best visual and verbal presentation of sites that have historical or architectural interest. See
http://www.travelvictoria.com.au/ then look at the region of interest.

I knew Tarraville was a town that most Australians would not know :) Port Albert might be small, but it is better known.

What a pretty church! I'd love to see it. Thank you so much for this interesting article. My great-great uncle was one of the first Anglican ministers in Queensland, so I am very interested in church history in Australia.

I lived in Yarram for a couple of years in my youth and I don't remember the church at all, and I was completely unaware that Tarraville had been such a large town.

I would be very proud if my family included one of the foundation Anglican ministers in the state.. it is almost as if our generation had a hand in building this nation.

I had not heard the term Carpenter Gothic architecture till last year. But we can see immediately why it worked so well in the early days of rural Australian church history.

that suggests to me that:

a] we don't know as much Australian history as we should do, especially me :(

b] towns rose in glory and disappeared into oblivion rather quickly, especially gold towns like Walhalla. Tarraville wasn't a gold rush town; its failure to thrive seemed to be related more to the train network in Gippsland.

And I do know a bit about trains in the area.

Hello Hels, There are many Carpenter Gothic churches in America, but this one looks a little different, perhaps because the bell-tower is off to one side, and not placed as a steeple. The tower is quite attractive and unusual. I'll start paying attention to this detail to see if I can find any American examples.

if I say here (in the USA) that I want to use trains and trams instead of hiring a car, they think I am a bit dim witted.

I wonder if there was another term for Carpenter Gothic in mid 19th century rural churches in Australia. Any examples you might find in American architectural history would be warmly welcomed.

That is really beautiful and I'm glad they have painted it blue and cream. I found the concept of Victorian Carpenter really interesting because for me, the era was so much about stone and urban development and memorialisation.

you are so right. We do think of the mid Victorian era as being much about stone and urban development and memorialisation.

So there was something about geographical remoteness and a lack of wealthy patrons that promoted an alternative style. I am going to look for more examples.

Marvellous design. Like this sort of white design for churches.

Ohhh Jim, me too. Have you seen any other churches that are comparable?

I found a North American example that brings out some of the points I was trying to make. The timber work on the St Stephen New Brunswick church is truly is beautiful.