Majorca is a fine island off the Mediterranean coast of Spain. Valldemossa, only 16 ks from the island's capital city of Palma, has retained its small, picturesque village character. So it was somewhat surprising to see bus-loads of tourists in Valldemossa, visitors who flock mostly to visit the monastery complex where Frederick Chopin and Amandine Dupin aka George Sand stayed in the winter of 1838-9. The Polish composer arrived on the island already exhausted and in poor health due to TB, hoping to work in a warm climate with beautiful beach views. And to relax with his lover, and her two children, far away from prying eyes. 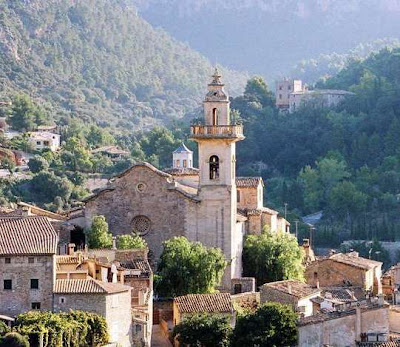 Valldemossa monastery, with views over the valley

Although it was the presence of Frederic Chopin (1818-49) that made Majorca famous, George Sand (1804–76) should have been of equal interest, at least for modern French visitors. She supported the French Revolution and in her books, letters and pamphlets she made a strong stand on changing relationships between men and women. Sand was a prolific writer, publishing 70 novels, 24 plays and thousands of letters. 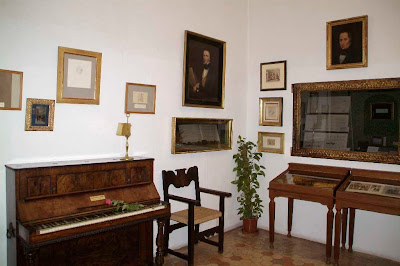 One of the rooms the couple lived in

Sand had made the courageous decision to leave the husband she didn't love as far back as 1830 when she travelled to Paris to pursue her literary career. Sand was friends with the cultivated company of the day who thought she was terrific, including Delacroix, Balzac and Liszt. And now I find I have mentioned her before in this blog: George Sand had a party where she introduced Franz Liszt to the famous performer Lola Montez. A very successful introduction it was, too :)

However Sand's great love was clearly Fredric Chopin, a man significantly younger than herself whom she met at a party given by Franz Liszt's friends.

It was her proto-feminism that grabbed attention, as she rather stuck out in her day as a free woman, challenging traditional expectations of women, wearing trousers and demanding equality and non-violence in relationships. This most interesting of women was very liberated for her time, especially since she lived with Chopin without benefit of clergy. And she didn't go to church on Sundays!

The locals must have been disturbed by their behaviour because the couple was evicted from their expansive villa in the island's capital city Palma. Chopin, Sand and the two children moved inland to an old, stone-built Carthusian monastery in the hilltop town of Valldemossa, where they lived in its rather basic accommodation that the brothers had once slept, prayed and studied in. With three rooms and a garden terrace, they lived a rather spartan existence. 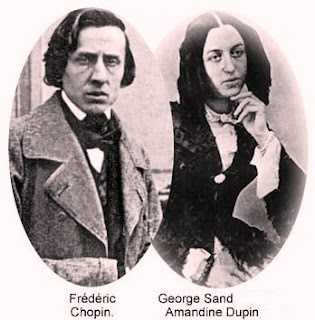 The ride from the harbour to the mountain village passes through olive and almond trees as the elevation increases from the coast. The village is quite charming, and the ancient monastery has been preserved very carefully. In addition to the cells occupied by Chopin and Sand, the church and pharmacy are both interesting. On my tour, the drugs and equipment in the pharmacy looked exactly as you imagine they would have looked in 1838-9. And following our tour of the monastery, all the visitors were entertained by a Chopin piano concerto.

The unusually miserable weather and the islanders' lack of hospitality during their year on Majorca was well described in Sand's book A Winter in Majorca (published Paris 1855). It is said that the islanders were not happy with the book and Sand was threatened with a law suit by some Palma lawyers after Winter in Majorca first appeared.

So why was this couple so important for Valldemossa? Majorca's Chopin Festival has been held every Sunday in August since 1930. The festival takes place in the chapel at the Valldemossa Monastery, consisting primarily of works by Chopin, alongside works by other composers as well. The Festival is famous enough to attract well known musicians from all over the world. As well as concerts, there are exhibitions and other events associated with the festival. 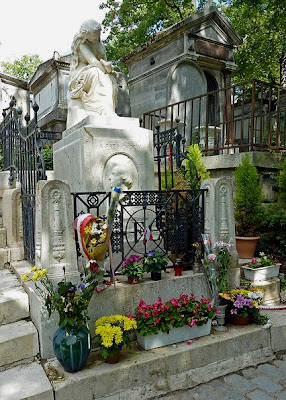 With the exception of the year on Majorca, Chopin established himself as leading composer and piano player in Paris during 1830-49. Shortly before he died in 1849, Chopin had requested that Mozart's Requiem be sung at his funeral service. Thousands of people attended the funeral of the 31 year old, but George Sand was not invited. The composer was buried in Pere Lachaise cemetery Paris, alongside France's other notables.

Hello Hels:
We have always somewhat disparaged Majorca [total prejudice, we know] for the island's reputation as a beach resort for tourists without our being aware of its connection with George Sand and Chopin which, together with the annual music festival, present it in a very different light.

Robert Graves, who years ago we met at the opening of a new building at St. John's, Oxford, also lived on the island.

Thanks for the history snippet. I have never heard of george sand but she certainly was ahead of time with her philosophy. Neither did I realise how young Chopin was when he died.

If she nursed him through the illnesses and moved onto a remote island for him, why did Chopin and Sand break up?

you are so correct! The island is chockablock full of historical fascination, going as far back as the Moors' building period. I went to one Chopin performance and it was terrific.

Hard to understand why some people just want to have yachts, daqueries and gorgeous beaches hehe

Chopin was young, sick, a long way from home (Poland) and tragic. Sand was healthy, long living, wrote well and knew the most culturally and politically important people in France.

How sad life is, sometimes.

Back in Paris in 1839, Chopin and Sand moved into flats on Rue Pigalle, spending winters in Paris and summers together at Nohant. Three years later they moved into ajoining flats in Square d'Orléans. Then they stopped talking to each other.

I suspect they were pushed apart by their differing politics and social groups; by Sand's difficult children; and by Chopin's inability to have sex.

Such a historical town with that look of ambience. thank you for showing this wonderful looking town through your eyes.

I was on a Mediterranean cruise ship that was only in Mallorca from 8 AM to 4.30 PM. But I saw enough to know I want to go back :)

My former in-laws tried to build a house on Mallorca, but the "islanders' lack of hospitality" drove them away and they moved back to Switzerland (inconveniently without telling us before we purchased tickets to Barcelona!).

One day I will get there.

Shame about the stuff up, but at least you had the pleasure of spending quality time in Barcelona.

Real estate agents on the island say that in recent years, 80% of buyers were British and German (retirees?), and they were buying the more expensive houses. Perhaps the locals got sick of it.

Admiring the persistence you put into your site and in depth information you provide. It's good to come across a blog every once in a while that isn't the same outdated rehashed information. Wonderful read! I've bookmarked your site and I'm including your RSS feeds to my Google account.

thank you. I was just in Majorca this winter and crawled all over Valldemossa and the monastery.