At first glance there doesn’t seem to be much of a connection between the political values held by the people in a nation, and the clothes that a nation manufactures and wears. But if anyone needs to be convinced that the connection is real, consider the 1960s in the British countries that I knew well.

No self-respecting, progressive young woman in 1965 would buy her clothes in any shop other than the Handicrafts of Asia chain. The cotton clothes she bought from those shops made a clear political statement that the young woman was concerned about the following:
1. natural (and not synthetic) materials;
2. the rights of women workers in Third World countries;
3. owning cheap, long lasting dresses;
4. ignoring the dictates of fashion houses in Paris and Milan; and
5. defying her mother’s tastes. 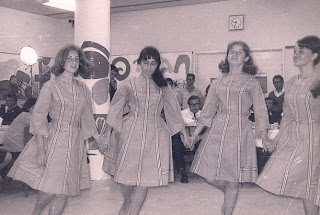 In Israel, even more so than in Britain, Australia, New Zealand and South Africa. Consider the changes that took place in Israeli society from the 1930s (a time of mass migration from Nazi Europe) to the 1980s (when capitalism ran rampant). Just 50 years! The country’s worldview used to draw its inspiration from draining the malarial swamps via shared labour (even if most citizens had always lived in cities), and providing for the welfare and education of every citizen, regardless of his income level.

The Ata Textile Factory, that was founded in Kfar Ata near Haifa in 1934, was fascinating. It was established by the Moller family, Czech Jewish industrialists, at a time when the nation’s most important social organisations were the trade unions (Histadrut) and the Labour government. By 1946, Ata had over 900 workers living in Kiryat Ata, all enjoying the community rights that made life pleasant eg housing, childcare and subsidised groceries.

In addition to the socio-economic story, the history of Ata also relates the story of the factory and its textiles i.e the physical appearance of Israeli society. Israel’s workers and soldiers wore Ata clothing, as did members of youth movements. When every prime minister in the world would have worn a suit and tie, David Ben Gurion proudly chose khaki shirt and slacks that suggested he was a man of the people, a worker of the land. Sandals were de rigeur.

One of the primary values behind ATA clothing was national solidarity. The factory's fashionable products in its early years included a drill fabric called Army and a cotton satin called Officer. There were only four colours available - khaki, white, black and blue.
*

How do I remember this so clearly? I lived in Israel in the middle 1960s.

In the 1960s, Ata realised the company needed to modernise its image so they established a female apparel division called Splendid Model. They started creating fashionable dresses in bright colours, not hippy but certainly reflecting the 1960s zeitgeist. But the times were changing faster than Ata was. The State of Israel was moving towards a capitalist model, raising the threat of privatisation, cutting the economy off from governmental management and making large cuts in welfare budgets. It was a tragedy for workers, but a great boon to industrialists. Soon urban and bourgeois Israelis preferred more stylish clothing from abroad, and they wouldn’t touch the old Ata lines with a barge pole.

The history of the Ata Company has been displayed at the Eretz Israel Museum in Tel Aviv, revealing the economic, political and social changes that took place in Israeli society during the most important decades in the state’s short history. The exhibition is called Factory, Fashion and Dream. It displays these national memories in a broad historical context, moving FROM pioneering spirit, workers’ rights, concern for the community and a commitment to basic, somewhat utilitarian clothes. It moves TO a rolling back of workers’ rights, modernity, private greed and lack of interest in the history of the state.

It was no wonder that the Ata factory closed down in 1985. Yet even then, the 3,000 Ata workers thought the government would save them from unemployment and poverty. It did not. The government stood aside, allowing a core part of Israeli society to close and workers to be cut adrift. For decades ATA had symbolised prosperous Israeli industry, proletarian pride and a struggle for the work place. Its closure meant that the sense of idealism, always a core part of Israeli identity, ended as well.

Hello Hels:
We had not, until now, greatly considered the connections to be made between fashion and politics beyond, of course, Communist China and so what you write here about the State of Israel, ATA, and the clothes of the 1960s is of interest and something which, we feel, through the museum is good to be documented.

How really interesting - never gave it a thought.

Fascinating. We normally get a very narrowly focused view and knowledge of and about Israel. At the very same time as Ata closed, momentous and similar changes were happening in Australia, as the worker's mate Hawke started the process of feeding lambs to the wolves as he gave control of our country's finances to overseas vested interests.

I also started to think of examples where women's fashions, in particular, were related to feminist politics.

So in the 1890s I can imagine young women, who wanted to ride bicycles, would no longer tolerate broken ribs and lack of oxygen. So they threw out their whale bone corsets and never went back to imprisonment again.

neither did I, until this Factory, Fashion and Dream exhibition started :)

One extra thing occurs to me. Countries that have school uniforms for all primary and high school students champion equality in appearance, regardless of family income; cleanliness and neatness; pride in school and community etc. Countries without school uniforms are more involved in individual freedom, initiative etc.

that is so true. Factories moved off shore; good quality manufacturing jobs were lost; loyal employees were thrown on the rubbish heap; and the quality of clothes seemed much lower.

I suppose the reason I didn't make the connection myself was because Australia is 4,000km wide. The width of Israel, at its widest, is 114 km. 100,000 unemployed people can get lost in Australia; 5 unemployed people in Israel stand out.

Remember the farming hats that everyone wore in the youth movements? Certainly they protected heads from the sun, but from behind, you couldn't tell the boys from the girls.

true true! The kova tembel hat was another Israeli national symbol. It represented the value of labour and a strong connection with the land. But it wasn't the sexiest object in a woman's wardrobe, was it?

As I follower of fashion, fascinating to find that these drivers of national solidarity would influence what young people chose to wear

it is interesting to think how much consumers direct design by their buying choices. Or, perhaps the more likely option, how much consumption is shaped by designers.

I am guessing that in the 1940-60s, money was tight in Israel and people wanted long lasting, inexpensive and comfortable clothes. By the 1970s and 80s, there was a definite move to fashionable and modern clothes.

Possibly this very same change was happening in societies across the globe.