Before the French Revolution (1789–99), each gold or silver object was stamped with a] a maker’s mark, b] a charge mark, to say the piece had been declared to the tax authorities and c] a discharge mark, to say that the tax had been paid. The amount of tax charged was of course a function of the weight of the piece. A fourth mark, the warranty, certified the silver content in the object. The warranty took the form of a letter that changed each year, enabling the buyer to determine the precise year of manufacture. 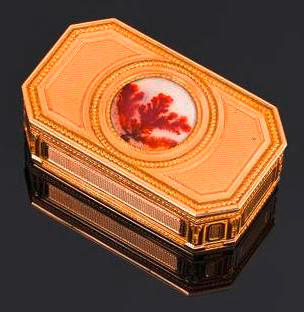 The goldsmith guilds, makers of luxury goods, had been suppressed during the French Revolution. So after peace and normality returned to French life, gold and silver makers had to regain consumer confidence. The new warranty mark was an administrative mark replacing the charge and discharge marks used in pre-Revolutionary times. The Gorgon head mark in a circular reserve was a warranty mark, used to assure buyers that the maker had paid tax on the object and to guarantee that there had been no collusion between the assayer and the tax collector. The Michelangelo head facing right on one side of an object was the silver standard or assay mark for Paris, used until 1838 for 950 silver.

Let me examine one of the last of the pre-revolutionary pieces (dated Paris 1789), marked before the First French Republic was declared in 1792. A gold and moss agate snuff box from Bonhams was made in rectangular form with canted corners. The cover was mounted with a central circular forest agate panel within a fluted and guilloche frame, flanked by panels of engine-turning within a border. The sides had similar engine-turned panels separated by pilasters, and the base was decorated with bright-chased and matted acanthus and feather scrolls. This exquisite object was tiny.

The 1789 snuff box was made by Adrien-Jean-Maximilien Vachette (1753-1839) with Vachette's pre-revolutionary maker's mark, the charge and discharge marks of the Paris warden, and a Paris mark. Fortunately we know quite a lot about Monsieur Vachette from Sotheby’s. He was born in 1746, the 15th child of his tax collector father. The young man completed 8 years apprenticeship and was registered as a master in Paris in 1779. His pre-revolutionary style emphasised classical clean lines and pilasters/flat columns. 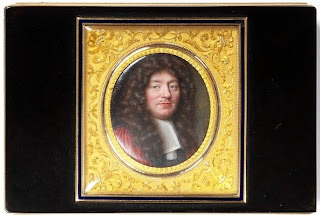 Vachette was one of the lucky artists. He disappeared during the years of The Terror and successfully resumed his profession in 1805, entering into various lucrative partnerships until his death in Paris in 1839. The V & A has an exquisite tortoise-shell box, mounted in gold and set with a miniature portrait of Monsieur de Pontchartreux. The maker's mark for AJM Vachette was signed on the rim as you would expect, but this time there were post-revolutionary Paris marks for 1819-38. Vachette’s tortoise-shell box was also small.

It is clear from the auction houses and museums that Vachette was a prolific artist, concentrating on what he knew best – small gold boxes. So that begs an important question. Did Vachette do his own decorative art works on the lids of his boxes? Assuming he did not, which other artists were responsible for the circular agate panel on the snuff box? and the painted portrait miniature of Monsieur de Pontchartreux? 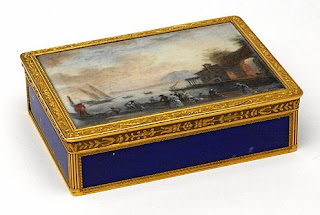 The Victoria and Albert does have a snuff box where the details of the painting are known. The chased and engraved gold work has glazed miniatures top and bottom, and lapis lazuli on the side panels. But note that the minatures had been painted in 1752 and 1753 by Antoine de Marcenay de Ghuy (1724-1811), a French painter and engraver. The miniature on the cover depicts the Bay of Naples while the view on the base shows Tivoli, near Rome.

Where had these two miniature landscape paintings been, between 1752 and 1809?

One painter decorator was very well known. Jean-Baptiste Isabey 1767–1855 went to Paris as a young man, to became a pupil of the incomparible Jacques-Louis David. Later patronised by Josephine and Napoleon, Isabey arranged their royal coronation ceremonies and prepared drawings for the publication intended as the official record of the day's events. 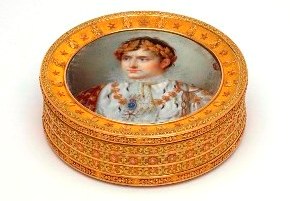 Examine a 1812 gold snuff box that had Napoleon Bonaparte stamped all over it. I love the portrait done by Jean-Baptiste Isabey. Here Isabey painted Napoleon in the coronation regalia he wore when he crowned himself Emperor Napoleon I. Surrounded with a border of alternating Napoleonic stars and bees, the emperor was sporting a gold diadem and royal cross. The snuff box itself, lushly composed of three different tones of gold, was not crafted by a French firm. Instead the job was sent to the Swiss firm: Moulinié, Bautte et Moynier.

Jacques-Félix Viennot also made French snuff boxes out of gold in the Empire era. A rectangular box with canted corners was particularly interesting because the cover and base had panels of an engine-turned cube pattern. For extra contrast, the borders were engraved with foliage on a matted ground. In the central oval is a fine portrait of Napoleon in coronation robes, painted by Isabey. The snuff box (made from 1804 on) is normally in Fondation Napoleon in Paris. Just for winter 2012 this small gold box will be located at the National Gallery of Victoria for the Napoleon: Revolution to Empire exhibition.

I was a big fan of your Napoleonic lectures and will certainly see the NGV exhibition. But the gold box would probably be too small to see, without looking for it in particular. So thank you.

Hello Hels:
We have read all of this with much interest. You are, most obviously, writing about a subject both dear to your heart and one upon which you are, very clearly, an authority.

We shall most certainly look up Vachette when next in the V&A.

We never got to see inside the V&A, but I did take photos of the outside. Excuse me, I need to sneeze, and not a beautiful snuff box in sight to cause it.

Bonhams says that the court jeweller Marguerite received JUST in mid-1806 an order from the Imperial court for 100 gold boxes, decorated with diamonds, ciphers and portraits. The Emperor and his court were on a gold buying binge!

Well worth going to the exhibition!

my art history passion at uni and after was always silver. Each silver art object was expensive, but not outrageously so. Gold on the other hand was, and is very very expensive. One gold snuff box, sold by Bonhams in 2011, fetched £58,850. It was only 9 cms long.

But I cannot help but be excited about how much exquisite work can be squished into 9 cms long.

get into the V & A if you get a chance. But the collection is endlessly huge and varied. Thus create a list before you leave Australia of things you most want to see. After 3 hours inside the V & A in the morning, you will want a large cold white wine to refocus the mind. Then a second wine.

Riveting - knew nothing of any of this.

I used to think the winter blockbusters at the National Gallery of Victoria were cheesy attempts to get hundreds of thousands of extra people through the turnstiles each year.

But sometimes there is some real scholarship involved.

Hi Hels,
I would love to attend that Napoleon exhibtion.
By the way, the Wallace Collection in London also has a small collection of Vachette works.

it goes to show!!! I have admired the paintings, porcelain and the furniture at the Wallace Collection three times in the past, but no one has ever drawn my attention to very small gold art objects.

Great post. I love the intricate work. Some of the boxes remind me of ones that are now lost forever after the Waddesdon manor robbery.

Was this stlye of work the remit of mainly the French, or was it popular over the courts of Europe in general?

great question. My feeling is that gold and silver art objects starred in other European centres, but not necessarily at the same time. Augsburg and Nuremberg had the luxury arts in the 16th century; St Petersburg in the second half of the 19th century etc.

Perhaps it had more to do with royal and noble patronage than it had to do with brilliant artists.

Ted Gott, NGV's senior curator of International Art, said Napoleon and his wife Joesphine were a true power couple, famous and stylish. They had a strong belief in the advancement of knowledge, they welcomed scientists and artists to receptions and to dinners where world affairs were shaped under their rule.

This may explain why from 1796 on, when the makers of luxury goods had been suppressed, Napoleon and Josephine were still living very elegantly.

Hi there, every time i used to check blog posts here early
in the dawn, since i love to gain knowledge of more and more.
Also see my web site > Prawnicy w Dubaju

welcome to the blog. Are you interested in European antiques, especially in precious metals?