Harbin - China's Paris of the Orient

Harbin was once a small snow-bound village, 1000 ks N.E of Beijing. In 1898 a city was established because the Russians needed to build the Chinese Eastern Railway. This railway line was to be an extension of the Trans-Siberian Railway, greatly reducing the travelling time across northern inner Manchuria to the Russian port of Vladivostok. I wonder if the planners saw any problem in having a Russian railway line, using Russian currency, Russian timetable, Russian passports and Russian equipment going through a foreign country!

The Harbin section of the Chinese Eastern Railway was built 1898-1902.

It seems not. In 1896 China gave permission for the railway to be built and for Russia to control a strip of land along both sides of the long railway. In a very short time, some 70,000 Russians and other citizens had moved to Harbin – railway workers, engineers, architects, shop keepers, teachers and road builders. By 1910, they had built a fully functioning, lovely European city de novo. Those who did well built themselves lovely villas and art nouveau apartment houses. 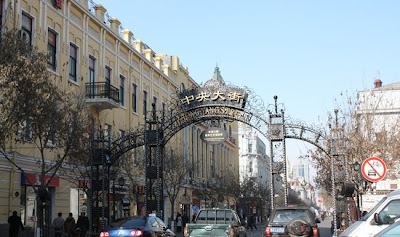 China Travel proudly reports that so many businesses were doing well that Harbin established itself as an international metropolis, a the centre of north eastern China. The Russians established a top class educational system for their citizens and published Russian language journals and newspapers. Other nations set up hundreds of commercial and banking companies in Harbin. The surrounding area had enormous reserves of gold, diamonds and timber, providing a reliable basis for new industries to be developed. 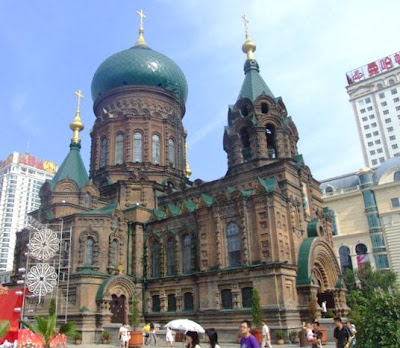 The city became a centre of commerce, of course, but also of religion and culture. The Russian Orthodox Church of Saint Sophia was given a majestic front with large doors and great arches. Completed in 1907, the traditional Russian architecture would have felt at home in Moscow or St Petersburg.

Because of its rich cultural life and ornate, European-inspired architecture, this Paris of the Orient became the City of Music.

Among the people who flocked to Harbin, Russian Jews arrived in their thousands. It is difficult to tell if they arrived because the Russian authorities were encouraging shop keepers, doctors and small business owners to move to Harbin, and so Jews were likely to be recruited. Or if the horrific pogroms in Eastern Europe forced young Jewish families, in particular, to look abroad for safely. What is certain is that in Harbin, Jewish citizens enjoyed all the economic, political and residential rights unavailable in Czarist Russia. And of course these rights were guaranteed (to all citizens) when the Soviet Union acquired the railroad zone later on. 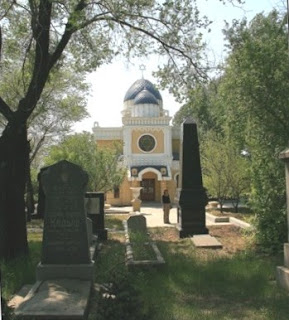 Jews in Harbin were furriers, bakers, shopkeepers, café owners, teachers and musicians, timber mill owners and factory workers. They built a moderate sized prayer centre, Old Synagogue, in 1909. This Synagogue was reopened in June 2014 after 12 months of renovations. The women’s gallery on the second floor, the men’s prayer hall and rabbi’s bimah platform have all been restored, complete with elaborate decorations that combine Jewish and Chinese symbols. It is now a concert theatre.

When the community became bigger after the Russian Revolution, they built a larger prayer centre, New Synagogue, in 1921 (now a museum). The community also built its own school, hospital, music centre, sports organisation and welfare facilities.

By the time of the Russian Revolution in 1917, Harbin started to look like a safe haven for about 150,000 refugees, largely White Russians, making the city the largest Russian community outside the Soviet Union. And the Jewish community grew and grew. Between 1918 and 1930, 20 Jewish newspapers and periodicals were published in Harbin, mostly written in Russian. Russian was the shared language for all ex-pats, as well as for their Chinese business associates and employees.

I don’t know much about Japan’s invasion of Manchuria in Sept 1931. But I do know that the Chinese army were forced to retreat from Harbin after bombing from Japanese aircraft. In 1935, the Soviet Union sold the Chinese Eastern Railway to the Japanese, which resulted in the first exodus of Russian emigres from Manchuria, in general and Harbin, in particular. Many ex-pat Russians went back to the Soviet Union, or to Shanghai. 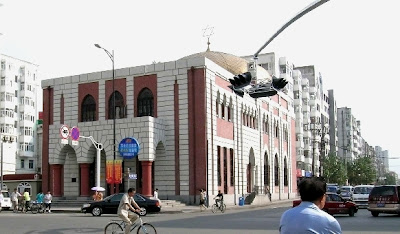 Nor is it clear what happened to Harbin after WW2. Clearly the city's administration was transferred to the Chinese People's Liberation Army in April 1946 and became part of the Peoples Republic of China in 1949. Within a couple of years, the rest of the European community quickly returned to their home countries or emigrated to Australia, the Americas or Israel.

Today Harbin's population is 10 million people, making it China's 8th largest city. Yet despite two generations (1896-1946) of Russian culture and development, nothing remains except the European architecture. Visit Harbin's old quarter today, near the Songhua River,  and you will find many intact baroque and byzantine buildings that were constructed by the Russians.

Useful reading includes: Passage Through China: the Jewish communities of Harbin, Tientsin and Shanghai, written by Irene Eber. This catalogue accompanied the 1986 exhibition held in Tel Aviv’s Museum of the Jewish Diaspora. And The Jews in China by Pan Guang, published by China Inter-continental Press in 2005. This book provides an extensive, mainly photographic record, with one chapter on Harbin. 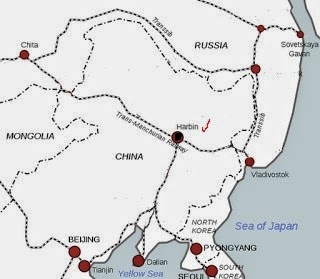 map of the Chinese Eastern Railway
to Vladivostok and Beijing, via Harbin

Good story, well depicted in 1930s postcards in AN AMERICAN IN CHINA: 1936-39 A Memoir. http://www.willysthomas.net/HarbinInfo.htm

I'm not sure how many were Jewish but a lot of Russians left the city in 1945 identified as White Guardists and collaborators with the Japanese, the rest were 'relocated' in the 50's. Quite a few resettled in Australia while many went to South America and formed colonies with traditional Russian beliefs.

GH Thomas
gtreat nick :) Those images are terrific, many thanks. No wonder the architecture was amazing.

"At one time it was the only city
in the Far East with a larger foreign than native population and contained almost as many foreign consulates as Shanghai. Central Street resembled Moscow's Arbat, and there were Russian banks, shops, restaurants and hotels. 22 churches graced the skyline - including the onion-domed St. Nikolai Cathedral, an architectural gem built of wood. It was like a little Moscow or Paris here, We had an opera here. There were so many magazines and newspapers and the cultural life was on a very high level".

isn't that interesting.. and rather tragic. The suggestion is that it was the Soviets who sent all those Harbin Russians (whom they identified as White Guardists) to labour camps. The Russians destroyed the very city that other Russians had built so lovingly for 50 years.

While I often teach about the Japanese attack of 1931 I had no idea that Harbin had such a rich background. Thanks for bringing me up to scratch.

I am not going to post any links but I think readers here should be careful tracking this town as the Japanese infamous unit 731 was based here and thousands of Chinese and Russians were killed around here and more thousands from plague.

Hello Helen:
What a fascinating account of the development of the city of Harbin. We love the title 'Paris of the Orient' and it seems so very apt when on looks at the European architectural styles which are still to be found there.

From time to time we toy with the idea of travelling on the Trans-Siberian railway, although the paperwork involved in travelling from Budapest to Moscow was alarming to say the least!

I have been very aware of Russian China since the early 1960s because some of my friends in high school had parents from Harbin or Shanghai. I've seen their photos and heard their stories many times.

What I do NOT know about is the Chinese history of China. If we read Chinese references instead of Russian references, would a post on Harbin be quite different?

sad, isn't it? I suppose we have to clearly separate Harbin's two great, but unrelated tragedies.

1. Japan’s invasion of Manchuria in Sept 1931 meant that the Chinese army was forced to retreat from Harbin. Many Russian residents of Harbin must have taken the opportunity to go back to the Soviet Union.

2. At the end of WW2, the Soviet Army controlled Harbin only in 1945-6, and this must have been when the rest of the Russian ex-pats starting leaving Harbin. But not to go back to the Soviet Union.

you know what the good people at Nike say: Just Do It! Then write it up for your blog :)

Train trips are definitely the way to visit large countries. I had a 20 year plan to sample every long distance, luxury railway trip in the world. So far I have succeeded in Canada, USA, Australia, India etc but alas the Trans-Siberian railway has been put on the backburner.

It would be interesting to know what a Chinese history of Harbin would be, as you note. Maybe we should always in our schools teach all sides of the story. (Probably no one would actually do that in public schools anyway!)

Very interesting. Everyone SAYS there are at least two sides to every history. Sometimes it is obvious eg The British call the 1857 war in colonial India "The Nasty Sepoy Mutiny". The Indians call it "The First Heroic War of Independence.

But this is different...hidden almost. The Chinese Eastern Railway guaranteed complete Russian sovereignty for 15 ks on both sides of the trainline and in Harbin, even though it was in the middle of another nation.

excellent article and may i add that if in need for affordable hotels in harbin i strongly recommend http://www.harbinchinahotels.com/

Thank you. I never advertise in this blog but I published your comment because the city's history was so important, starting with the building of the railway. I know a number of families who lived there until c1950.

Harbin's Main Synagogue was reopened in June 2014 after 12 months of renovations. There was a festive ceremony featuring a performance by the String Quartet of the State Glazunovs Conservatory.

The women’s gallery on the second floor, the men’s prayer hall and rabbi’s bimah platform have all been restored, complete with elaborate decorations that combine Jewish and Chinese symbols. However the reopened synagogue is not meant to function as a place of worship but as a concert theatre.

thank you. I will add a note in my original post.

Plus it must be said that I would love to visit Harbin (and Shanghai) within the next 12 months.