Ennis House is an impressive home in Los Angeles, designed in 1923 by Frank Lloyd Wright (1867-1959) for Charles and Mabel Ennis, the owners of a men's clothing chain. Built in 1924, the first thing a viewer notices is that the property is spread over half an acre, along a ridge with awesome views of the Hollywood Hills.

The second thing to notice is the design. The structure is the largest of Wright's Los Angeles-based “textile block designs” i.e using thousands of interlocking, pre-cast and patterned concrete blocks. Concrete was still a new material for home construction in the 1920s, so Wright’s materials were certainly cutting edge. But more than that. The detail that immediately stands out is the relief ornamentation on its concrete blocks, inspired by the symmetrical reliefs of ancient Mayan temples. 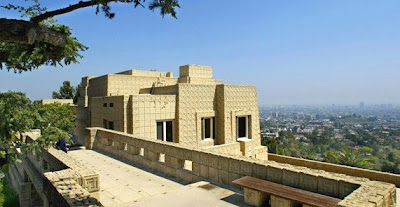 Wright built four houses with the textile block design – La Miniatura/Millard House, Ennis House, Freeman House and Storer House. But I did not think it was attractive. Even Wright himself said “What about the concrete block? It was the cheapest and ugliest thing in the building world. It lived mostly in the architectural gutter as an imitation of rock-faced stone. Why not see what could be done with that gutter rat? Steel rods cast inside the joints of the blocks themselves and the whole brought into some broad, practical scheme of general treatment, why would it not be fit for a new phase of our modern architecture? It might be permanent, noble beautiful.”

Architectural Digest (October, 1979) agreed, saying: "The Ennis House is one of the first residences constructed from concrete block. Wright transforms cold industrial concrete to a warm decorative material used as a frame for interior features like windows and fireplaces as well as columns. His 16” modular blocks with intriguing geometric repeats invite tactile exploration. The art glass windows and doors, reminiscent of examples from the earlier prairie period, here achieve greater colour suddenly as they graduate in intensity from darker at the top to lighter at the bottom. The metal work based on Mayan imagery is not of Wright's design, and may have been included at Mr Ennis' request. Yet from the very large iron grill at the main entrance to such minute details as light switches and lock plates, there is a unity of conception and materials that complements the entire structure."

I wonder why the house was designed by Frank Lloyd Wright, but built and supervised by his son, Lloyd Wright. And I wonder why the early, horizontal Prairie Style was not utilised here. Because California was substantially different, in climate or in taste, from Chicago? Was the Prairie Style too arts & craftsy, and too early C20th for the sophisticated 1920s? It seems that Wright felt typecast as the Prairie house architect so he used the Los Angeles era to broaden his architectural vision.

In any case Mr Ennis was a passionate scholar of Mayan art and architecture, even before he had discussions with the architect.

The house had 2 buildings, the main house and a staff flat, separated by a paved courtyard. Unlike the vertical orientation of the other three textile block houses, the Ennis House has a long horizontal loggia spine on the northern side connecting public and private rooms to the south. 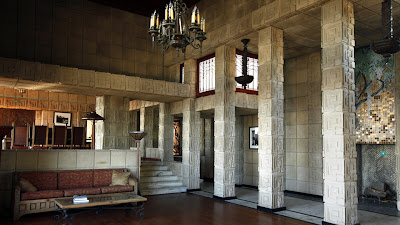 living room, then steps up to the dining room

In 1940 the house was sold to a new family and then altered by Wright, adding a pool and some rooms. Augustus Brown, who owned the property from 1968 to 1980, was the last private owner of the Ennis house. To ensure its safe keeping, Brown created the Trust for Preservation of Cultural Heritage, now the Ennis House Foundation.

There had been structural problems with the Ennis House since the beginning; the concrete blocks had cracked and the lower sections of the walls had moved. The concrete was a combination of gravel, granite and sand from the site, mixed with water and then hand-cast in aluminium moulds to create the blocks. It took 10 days for each block to dry before it could be stacked into position. Perhaps using decom­posed granite from the site, to colour the textile blocks, introduced impurities to the concrete mix. And combined with Los Angeles’ specific air pollution problems, perhaps this had caused the concrete to moulder.

More damage occurred due to the 1994 Northridge earthquake and the record rain in 2004-2005. The Ennis House Foundation was very worried about the millions of dollars it would take for the full restoration project.

In 2005 the house was added to the National Trust for Historic Preservation's list of the Most Endangered Historic Places. In 2006 a Federal Emergency Management Agency grant was issued and the restoration work went ahead. The house has since been declared a Los Angeles Historic-Cultural Monument. 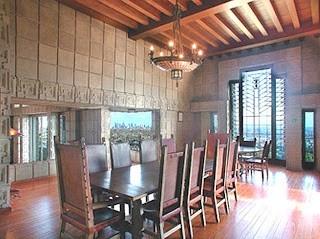 More recently, Frank Lloyd Wright's La Miniatura/Millard House (1923) in Pasadena has come up for sale. For amazing photos of the patterned concrete blocks inside and out, see the Glamour Drops and Rich of Eve blogs. The Millard House is listed on the USA's National Register of Historic Places.

Needless to say, the view is sensational. Frank Lloyd Wright was commissioned to design a house for the best site in all of Los Angeles.. and he certainly made a statement!

Lloyd Wright was landscape designer and architectural manager for his dad's projects in Los Angeles. Young Lloyd Wright had particular responsibility for creating the cast concrete textile-block units you described.

Working with or for his dad could not have been easy.

that makes sense, thank you.

Now we need to ask if Frank LW travelled to Los Angeles, did the architectural plans for the projects there, and left. Or did he live in Los Angeles for the duration? From what I can find, it sounds like his son was in total control of the building works in Frank LW's absence.

resident from the icon said...

Well built house and the spot was close to perfection. I love the design too.

The Los Angeles Times' Home section convened a panel of historians, architects and preservationists in 2008 to vote on the region's best houses of all time. The Ennis house ranked ahead of the Modernist Eames house, the John Lautner spaceship-on-a-hill known as Chemosphere and the Arts & Crafts beauty the Gamble house.

resident from the icon and anonymous,

the experts agreed. As recently as 2008, Ennis House was still thought of as one of the region's best houses of all time! Frank Lloyd Wright would rightfully have been delighted.

The house was different and beautiful in its own way.

*nod* there was something very special about the four FLW houses with the textile block design in Los Angeles. I prefer the Prairie Style aesthetically but the Los Angeles homes are far better adapted to Southern California's climate, light and topography. Just look at the internal spaces!

I have added links to one of FLW's other Los Angeles-based textile block designs, La Miniatura aka Millard House (1923) in Pasadena. Built in the same year as Ennis House, the internal and external photos will remind the reader of Ennis House's materials, style and spaces.