In April 1897 a few Viennese artists formally organised themselves into a group, having the rather ambitious goal of bringing the city into more active contact with progressive art abroad. This Vienna Secession, which consisted of Gustav Klimt (president), Koloman Moser, Josef Hoffmann, Joseph Maria Olbrich and Max Kurzweil, did not intend to make a total break from the mainstream art world. In fact they accepted help from the city government so that the Secession could quickly secure land for an exhibition hall; the building itself was constructed within a few months.

The 8th Secession exhibition was held in Vienna in late 1900. It included rooms filled by the Glasgow School and CR Ashbee's Guild of Handicraft. They presented works of the most important artists from the rest of Europe: Charles Rennie Macintosh, Vincent van Gogh, Edvard Munch, Toulouse-Lautrec and Paul Gauguin.

The 14th exhibition in April 1902, was the best they put on - focusing on Beethoven. In early 1903, the Secessionists presented their 16th exhibition called The Development of Impressionism in Painting and Sculpture. 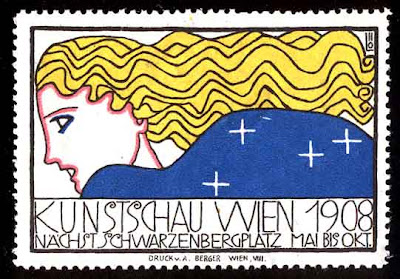 The Wiener Werkstätte/Vienna Workshops, founded in 1903 by Josef Hoffmann and Koloman Moser, wanted the unification of the fine and applied arts. But the presence of these crafts-oriented individuals in the Secession did not warm the hearts of the many members who gave top priority to painting. Disagreements became more vigorous and so the Klimt Group went off on its own, within just two years of the Werkstatte’s formation.

The Kunstschau/Art Show of 1908 was arranged by artists in the Gustav Klimt Group and coincided with the celebrations held in Vienna for the diamond (60th) anniversary of Emperor Francis Joseph I’s reign. The artists were offered the use of vacant land, which had been designated for an eventual Konzerthaus, as an interim exhibition venue. In only a few months, Josef Hoffmann, Gustav Klimt, Otto Prutscher, Koloman Moser and others built and furnished temporary buildings accommodating 54 exhibition rooms, gardens, interior courtyards, café, a summer stage and a completely furnished, two-storey country house.

Painting, sculpture, graphic arts, decorative arts and stage design were combined to create an art programme on exhibition premises covering 6,500 square metres. Indoor and outdoor floor space, walls, and showcases were filled and covered with works by 176 artists and many students from the Vienna School of Arts and Crafts. 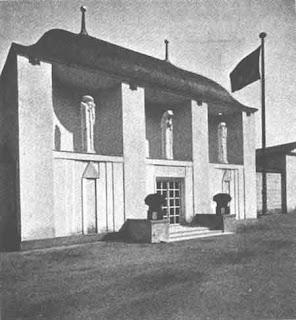 Entrance to the Kunstschau exhibition hall

Whereas the Procession of Emperor Francis Joseph I in the diamond jubilee year showed off the Habsburg monarchy’s long cultural diversity, the Kunstschau was somewhat different. Gustav Klimt (1862-1918) , in an opening speech that apparently was quite moving, declared the Kunstschau was a show of force of Austrian ambitions in art.

For young artists and students like Oskar Kokoschka (1886-1980) and Egon Schiele (1890-1918), the Kunstschau was their first exposure to foreign art, and a brilliant exposure it was. But there was a downside. Despite the enthusiastic press reviews, and the enthusiasm of those who did turn up, the numbers were smaller than hoped for. Perhaps there was a deliberate campaign against the Kunstschau.

How do I know how the exhibition rooms were set up? In October 2008, 100 years after the initial exhibition, the show was recreated at the Lower Belvedere. A large part of the original exhibits was exhibited in replicas of the former exhibition rooms, as well as documentary photographs, models, original plans and films.


One room was allocated to leading members of the Wiener Werkstätte. Another room had reproduced posters, pasted directly onto the walls as they were back in 1908. And yet another room of Theatre Art had glass mosaics and puppets, stage designs and costumes. Perhaps the most important room was dedicated to major works by Gustav Klimt eg Fritza Riedler (1906), Adele Bloch-Bauer I (1907), The Three Ages of Woman (1905), Danaë (1907/08) and his most famous work The Kiss (1908), which was acquired for the collection now housed in the Belvedere. 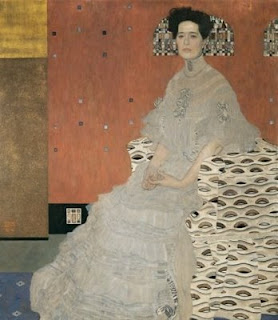 Had I been alive back then, I would have hoped that the Kunstschau of 1908 might improve the reputation of Gustav Klimt in mainstream art circles. But with hindsight, we can see that the good times were not going to last for long. With the deaths of Gustav Klimt, Koloman Moser and Egon Schiele all during WW1, Austria’s flirtation with modernism came to a shuddering halt.

And after the war ended, it was even worse. The post-war economy could not feed its own citizens, let alone support an active art market. Even Kokoschka left Vienna and spent most of his long career outside the country. The Wiener Werkstätte and the Secession WERE still operating, but their impressive years were long gone. 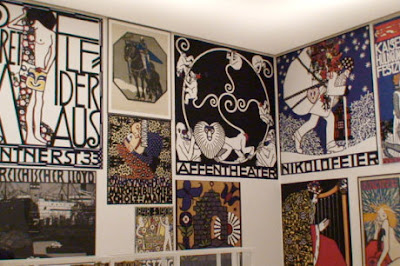 I have a friend who is mad keen on Klimt and I was sure I had seen a picture of this important exhibition. Found it in the end

Hermes,
I have seen many photos of the Kunstschau 1908, but I have never seen the Art and Child Room designed by Adolf Boehm. It shows just how carefully and beautifully designed each of the rooms must have been.

always so educational to read your blog. I go to the Neue Gallery a lot and get to see Klimt there. But I am longing for a stay in Vienna to explore their beauty of the past.

All the Secessionist art exhibitions were impressive.. and happily, there were many of them. But the Kunstschau in 1908 was the most impressive of them all! Partly that was because the show was established to celebrate the all-important, 60th anniversary of Emperor Francis Joseph I’s reign.

My favourite little book for Vienna, Scotland and the European Avant-Garde is called "Vienna 1900". It was written by Peter Vergo.

The posters are the best. I could spend hours in that room.

Chris,
Agreed. I have recently addded poster art as a category for my blog because they are such a beautiful and visually powerful art form.

But at the Kunstschau the posters were right up to the ceiling line and squashed together horizontally. The organisers must have wanted to include every poster published in Europe!