Who was the first successful toilet designer? Not the most important question in modern history, I realise, but interesting nonetheless. My immediate response would have been the plumber Thomas Crapper (1836 - 1910). 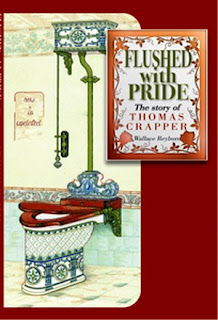 Flushed with pride: The Story of Thomas Crapper, by Wallace Reyburn

Sir John Harrington is credited with inventing the first flushing water closet, "the John", back in the 16th century. He installed one at his country house at Kelston near Bath, and described it in his A New Discourse of a Stale Subject 1596. Wealthy households might have had a close-stool, which had a padded seat with a metal or porcelain container beneath it, but a close-stool still had to be emptied. Harington’s device emptied itself - it had a pan with a seat and water was pumped up into a cistern above. When a handle on the seat was turned, the water swept the pan’s contents into a cesspool underneath. Although Queen Elizabeth I was impressed and ordered a flush toilet from Harrington, his invention did not catch on.

Things did not change quickly until the mid 19th century when the British Public Health Act of 1848 required that every new house had to have a w.c. The Antique Victorian Furniture Blog  noted that a Mr Jennings had already taken out a patent for the flush-out toilet in 1852, when Thomas Crapper was still a teenager in Yorkshire. And a British patent for the "Silent Valveless Water Waste Preventer", a siphon discharge system, was issued to Albert Giblin.

Was the Mr Jennings referred to above the George Jennings (1810-82) who installed his monkey closets in the retiring rooms of Crystal Palace, just in time for The 1851 Great Exhibition at Hyde Park? The Great Exhibition toilets were certainly very popular! People had never seen public facilities like this before, and during the exhibition some 800,000 visitors paid their penny and received clean, efficient services. George Jennings definitely continued to innovate – he also designed the first underground toilets at the Royal Exchange, in the City, in 1854.

So the plumber Thomas Crapper clearly did not invent the toilet. In any case, most people did not have flushing toilets in their homes, even well into the Victorian era. 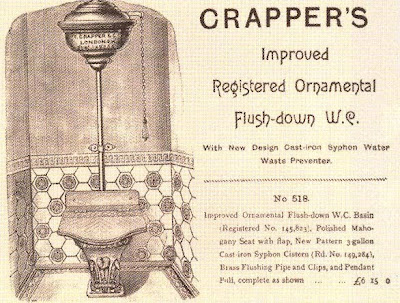 Thomas Crapper advertised in magazines, newspapers and on posters.

Yorkshireman Thomas Crapper was apprenticed to his brother, a master plumber, in 1853 and founded his own plumbing business only 8 years later. It was then, once he moved to London, that Crapper really DID develop some important inventions to made toilet technology run more smoothly. Crapper held nine patents, three of them for water closet improvements such as the floating ballcock, although none were for the flush toilet itself.

Crapper was both an innovator and a big advertiser!

In the 1880s, Prince Edward/later King Edward VII was given Sandringham House in Norfolk by his mother. Prince Edward pulled down the old home and built a new one, asking Thomas Crapper & Co. to supply the plumbing. It was a big project, since there were at least 30 toilets with beautiful cedarwood seats and surrounds; it gave Crapper his first royal warrant and was the turning point in his career. Thomas Crapper and Co. received further warrants from Edward as King and from George V, both as Prince of Wales and as King. Crapper's name quickly appeared on the toilet furniture itself and in advertising using every medium he could think of. 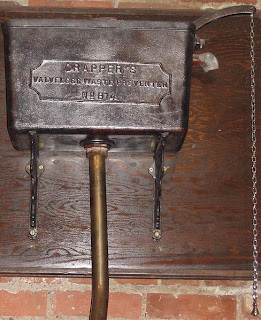 Apparently nephew George Crapper was also important to Thomas Crapper & Co. George was awarded the 1897 patent for improvements in automatic syphonic discharge systems. When Thomas Crapper later retired in 1904, he passed the firm on to this bright young nephew.

Why didn't the royals give Crapper a knighthood? After all, he had many dealings with royalty, all of them very satisfying. And Albert the Prince Consort had certainly presented George Jennings with the Medal of the Society of Arts at the height of Jenning's career. I suppose Crapper will have to rest in peace, knowing that his work helped to bring about a change in public attitude about buying sanitary wares.

One last thought. The word crap is said to have derived from Dutch (krappe meaning to separate), and first came into use in medieval English, centuries earlier. If that is true, it is a remarkable coincidence. It seems that crapping went into the English language, not invented by the Yorkshireman, but in honour of him. Nonetheless, if I was the nephew George Crapper or one of the next generation of Crappers, I would have changed my surname.

Read Lawrence Wright’s book Clean and Decent, published by Viking Adult in 1960 or Wallace Reyburn’s book Flushed with pride: The Story of Thomas Crapper, published by Trafalgar Square in 1998. Then if there is any other question you still have about toilet history, visit an original crapper in The Science Museum in London. 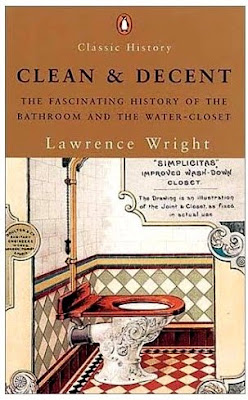 This post was written a year ago, but not scheduled for publication until later this year. Then this morning I found an advertisement for Thomas Crapper and Co's authentic period bathrooms. Having held four royal warrants and having existed through five reigns over 148 years, Thomas Crapper & Co. is once again in business, manufacturing  historically accurate Victorian and Edwardian sanitaryware.

My head is bursting with puns, childish humour and double entendres. Be still my fingers. I will just say most interesting and like you, I thought Crapper invented the wc.

Hello Helen:
As you may imagine, and are most likely aware, antique, salvaged 'Thomas Crapper' items command a very large price in Britain where they are most sought after for restoration projects or even to be installed in new developments which demand period fixtures and fittings. Reclamation is now a very big business - probably also in Australia.

it is inevitable, isn't it? Every bum, buttock, peeing and outdoor dunny joke we heard in primary school comes uninvited into the brain. But imagine going through school with the surname Crapper. Dear god.

Elegance and historical authenticity are two important things, but what about comfort and efficiency?

Good point. It should not surprise us at all that antique, salvaged Thomas Crapper items are highly sought after. They are very desirable collectors' items, almost.

What might surprise everyone is the market for historically accurate, reproduction Victorian and Edwardian Crapper items. People who cannot find, or cannot afford the original pieces, still want top quality fixtures and fittings that look as if they came from Crapper's production line.

at first it wouldn't have mattered if the new indoor toilets were neither efficient or comfortable. The alternatives were far worse.

But as time went on, and competition hotted up, comfort and efficiency became far more important. Thomas Crapper was very good at self-advertising, but he was also a great designer and business man. His royal warrants were evidence of satisfied royal bottoms.

nod. Well to do Roman families had running water and lovely toilet blocks with marble surrounds. Sometimes it takes hundred and hundreds of years before someone reinvents the wheel.

I suppose there was nothing that could be done about the upstairs problem, except put the loo downstairs. At least until the problem got sorted.

thank you for that. I wonder why he wanted to be buried in Beckenham and not in Thorne, where he came from, or London, where he lived for much of his adult life. Perhaps his nephew made the choice.

Jim
agreed. There is no reason why a plumber cannot be a successful designer and business man. We owe a great deal to Thomas Crapper.

These comments are naive anachronisms by copy-cats who cannot cite a single primary source. That goes for the Oxford English Dictionary, too, and its numerous copies. Nary a single crapper joke was known before England's hi-tech Crapper WCs were first frequented by soldiers in the WW-I AEF (American Expeditionary Force). Most doughboys were farm boys used to the US "outhouse", a wooden outdoor privy. That was itself well ahead of farm life elsewhere in the world and still is. Victoria would not have been amused by the Crapper manhole lid at Westminster Abbey, since it was not funny or taboo then. I grew up in a house built in 1880s in a progressive NY state city; it got its indoor toilet in 1913. English Crapper WCs were not exported to the USA. Professor Allen Walker Read published the earliest attestation of the inflected form "crapped" in his "Classic American Graffiti" dating from the post-WWI USA. Davies' Corpora show the earliest uses in the US date from the 193s. Ken Grabowski interviewed all of Thos Crapper's surviving relatives in recent years. They were dumb-founded by the hullaballoo, which was jump-started by Wallace Reyburns' "Flushed with Pride," which was a farce, not a hoax. The 1840s slang "crapping ken, cropping case" cited in the OED is totally mis-interpreted. It was a joke adverting to the "crop/crap" (Scots) of grass for the wipe, not the dump. –Crapper denial is as ignorant as the supposed JFK Berliner jelly doughnut myth.

many thank you for your response.

Being an Australian, I would only have been aware of the British terminology. But it makes sense that EVERY society would create its own language for something as common as toilets.

Criticising the Oxford is a bit like criticising God :) It takes a strong person to do it.

I have added a reference to Sir John Harrington who was credited with inventing the first flushing water closet.

true true.. but it is the clever thinking that counts. I refer you to Discover Britain magazine Jan-Feb 2014. Sir John Harrington's flush toilet was voted as one of the eight all-time great inventions that changed the world.

Wonderful blog! I found it while surfing around on Yahoo News.

Do you have any suggestions on how to get
listed in Yahoo News? I've been trying for a while but
I never seem to get there! Appreciate it

Thanks for reading this blog. Apparently today is World Toilet Day which you might like to check out:

Simon Kirby read Lucinda Lambton's book Temples of Convenience and decided to research why the manufacturer had gone bust. After searching through the archives at Companies House, he was astonished to find that the company was still alive, although dormant. And he just had to have it.

Thomas Crapper & Co is now based just outside Stratford-upon-Avon.

What a strange gift for a mother to give her young son (the book, I mean.. not a toilet). But look what good came out of it :) Thanks.

The blog Spitalfield's Life has an excellent post called At God’s Convenience 31st Jan 2019. The gentle author focused on John Wesley’s Chapel’s in City Rd when he paid a visit to the underground shrine of Thomas Crapper – our champion of the flushing toilet and inventor of the ballcock!

Thanks for the link and the great photos
Hels
http://spitalfieldslife.com/2019/01/31/at-gods-convenience-x/

thank you both. However I don't accept advertising.

Your article is very helpful for me.