I had imagined that Gabrielle Chanel (1883-1971) was a neonate when she and her sib­lings lost their mother. Actually she was a young teenager when her impoverished father dumped them all in a Catholic orphanage, where she lived a rather horrible life until liberated six years later. The only advantage Chanel reported from orphanage life was learning to sew well. 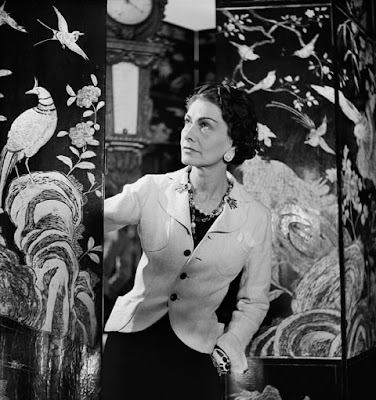 Coco Chanel in her own outfit

Then I read Justine Picardie’s book Coco Chanel: The Legend and the Life which was published by Harper Collins in 2010. Justine Picardie’s is not the first biography of Coco Chanel and each author has faced the same problem: what was the truth about Coco Chanel anyway? Certainly some aspects of Chanel's life were confusing: she herself gave so many different accounts to friends and biographers.  She was so desperate to reinvent herself that she destroyed her own birth certificate and carefully hid her past.

On the other hand, it may not matter. She changed the world for style-conscious women. In 1910 Chanel opened a small business at 31 Rue Cambon, in Paris’ 1st arrondissement, and sold mainly hats. Within a couple of years, and still before WW1 broke out, Chanel expanded to Deauville, where she began selling casual resort outfits, jersey being an intelligent and flexible fabric for the cashed-up working women. Post-war Chanel established her fullblown couture house at the same 31 Rue Cambon, below her old flat and workshop.

Chanel’s lushly decorated flat could not have been more different from the prison-like orphanage in which she grew up. The flat is still famous today and everything is preserved just as it was left (photo below). 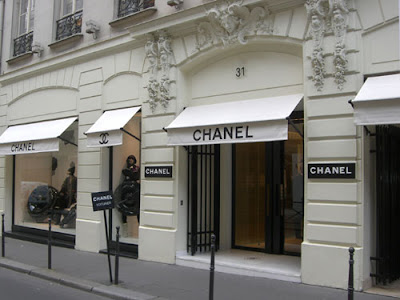 Chanel associated with endless numbers of important people, I am assuming for professional reasons in the first instance and later for more social reasons. But she could not have slept with every aristocrat, film star & musician, male and female, in Europe. From my perspective the most surprising relationship occurred when Chanel and Igor Stravinsky met, for a second time, in 1920. Stravinsky had emigrated to France following the Russian Revolution, with his wife and children, but that didn’t stop him moving the younger woman right into his marital home.

It is interesting to speculate on why Chanel never married. Not from lack of admirers. She seemed to have been attracted to people who could help her career or who were wheelers and dealers in their own lives: the Duke of Westminster, Pablo Picasso, Christian Dior, Elsa Shiaparelli, Yves Saint Laurent, Greta Garbo and Marlene Dietrich.

During the 1920s, Coco Chanel actively promoted further the freedom of women's fashion. She invented or popularised:
-the little black dress,
-arguably the most famous perfume on the planet,
-short hair,
-elegant slacks,
-the rather boxy Chanel suit and jacket, made from wool,
-strings of pearls and
-the most successful fashion brand of the era.

In short Chanel was a designer and dealer of elegance, an individual who helped change the way women wanted to look.

I am not at all clear on why a seamstress and fashion designer became involved with perfume, but she did. In 1922, the Chanel No 5 perfume was launched. Soon Coco needed someone with extensive experience in commerce, international business connections, and access to large amounts of capital to market the perfume professionally. In 1924, businessmen Pierre & Paul Wertheimer became Coco Chanel's partners in the House of Chanel perfume business.  During their partnership, Wertheimer owned 70% of the Chanel perfume company.

Chanel's friendships just before and during WW2 seemed rightwing and very nasty. After the Germans occupied France in 1940, Chanel lived with the Nazi officer Hans Gunther von Dincklage in the Ritz Hotel in Paris. And she became a very close friend of Nazi General Walter Schellenberg. Chanel wanted to benefit from the law banning Jews from owning businesses, in order to take over 100% of the Chanel perfume company. She apparently forgot that the Jewish Wertheimer brothers were the very people who had saved her in the 1920s... or she did remember it perfectly well. Perhaps her friends the Duke and Duchess of Windsor encouraged her anti-Semitism.

Actually Hal Vaughan suggested that she became fiercely anti-Semitic, long before it became a question of pleasing the Germans. Chanel had become rich by catering to the very rich, and shared their dislike of Jews, trade unions, socialism, Freemasons and communism."

Like quite a number of French women, Chanel was later charged as a collaborator with the Germans, but it isn't clear why the case wasn't pursued in court.  It is telling however that post-war, her new collection did not have much success in Paris.  Presumably this was explicitly because of her war-time relationship with the Nazis. The British and American public didn't care; they continued to buy up her new range with fervour.

The world was a different place in the 1950s and 1960s, so my story would have stopped here. But I want to mention two more Chanel success stories. In 1953 she collaborated with French jeweller Robert Goossens to design a special line of jewellery to go with the Chanel suits. He successfully blended artificial jewels with semi-precious gems, and made the outfits look splendid.

And in 1957 Chanel visited Dallas and whilst there, won the Award for Distinguished Service in the Field of Fashion given by Stanley Marcus, owner of Texan retailer Neiman Marcus. Karl Lagerfeld thought the French press had treated Chanel's WW2 activities abominably and was delighted when her career kick started in the USA.

In Dec 2013 there are some reminders of Chanel's happy connection with Dallas - Karl Lagerfeld is showing the latest Chanel Metiers d'Art collection at Dallas' Art Deco exhibition venue Fair Park. It begins with the premiere of a film written and directed by Lagerfeld titled The Return, that retraces the steps of Coco Chanel as she reopened her Paris couture house in the 1950s.

There are many beautiful photos throughout the book, images which told a great deal about the life and times of Coco Chanel. It is difficult to imagine how one scared, lonely 12 year old girl, abandoned in an austere and very tough orphanage, turned into to leading designer of the fashion world and a companion of the rich and famous. But the book and the photos managed the task very well. 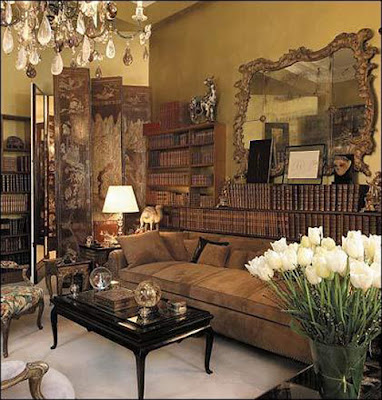 At 87 Coco Chanel was still working as normal, preparing for the spring collection. She died in harness in January 1971.

It certainly is not easy to find out why the case against Chanel wasn't pursued. I never knew about it.

I have a middle-aged(non-Jewish) German born lady colleague at vintage fashion fairs who specialises in costume jewellery. A couple of years ago, at the time the film "Coco Before Chanel" was in the news and I was admiring a Chanel piece she was selling, she hinted darkly that Chanel was a 'collaborator' during WWII. I was quite taken aback at the time but it seemed to be common knowledge as far as she was concerned.

In the newspaper coverage there were hints of royal intervention, but which royals? The Duke of Windsor? the Duke of Westminster? The king and queen of Britain? This all sounds a bit unlikely and a bit conspiratorial to me.

I would have to agree that what it rather shocking and disbelieved information today was probably common knowledge in Paris after 1945. But if people learn history from the cinema, and not from war-time archives, it is to be expected.

You mentioned the film Coco Before Chanel starring the delectable Audrey Tautou. A great film, but not one that mentioned the Second War War at all. Gabrielle Birkner wrote the movie’s official Web site omits from its biography of the designer the 15 years between the eve of the Nazi invasion and Chanel’s comeback fashion show. “In 1939, she closed her Couture house. Then, aged 71, she returned with a legendary fashion show presented on February 5th, 1954". Whooooosh. No war.

Was Chanel worried about her competition? Did she keep an eye on the other famous fashion designers of the era following the first world war.

Objectively speaking, I suppose her hottest competitors were probably Jeanne Lanvin and Jean Patou in the 1920s, Elsa Schiaparelli and Madeleine Vionnet in the 1930s, and Christian Dior after WW2.

But Chanel's may not have seen it as a competition. Her creations were minimal, simple, sleek and unpretentious because she believed that fashion fades; only style remains the same. So while the others created mere fashions, she created style.

I'm with Andrew - completely new to me. How interesting this all is.

a] History can be cleaned up, even relatively recent history when there are still people with living memories; and

b] thank goodness for good quality historical blogs. I am finding bits and pieces all over the blogasphere.

This post have great knowledge an valuable information, the author presents this article in very unique and diiferent way i never read this article before this such a great artcile.

Coco Chanel was a great achiever, from a really humble start in 1910 or so! And over a huge length of time. Most of us would retire at 65 and have a less stressful older age.

I bet they are not worried about their competitors, they have the strong foundation with their businesses and other brand of fashion dresses would find it hard to put Chanel down...

Coco Chanel was being a little bit precious with her comments about other designers, but in one way she was absolutely correct. She worked hard, she collaborated with the best people, and she targeted women who wanted elegant simplicity with perfect accessories.

I have added a reference to the book Sleeping With The Enemy: Coco Chanel's Secret War, by Hal Vaughan. The blog called "Tweedland The Gentlemen's club" has reviewed the book at length.

An old Lagerfeld film is being shown in Dallas. The film covers Chanel's return to the fashion business in 1954, and the part the US media and market played, given the frosty response by the French press.

Thank you. Who knew that Dallas would have an important role in resurrecting Chanel's career after the war? I didn't even realise that Karl Lagerfeld showed the latest Chanel Metiers d'Art collection in Dallas this month (dec 2013).

This was very interesting, Hels? It is strange that Chanel was so influenced by the convent when she hated it so much. Her residences were luxurious but her bedrooms were very stark and simple, apparently.

There is a rumor that she was actually saved from being arrested by Churchill, who used to stay at her house on the Riviera, and her niece confirmed this, according to the book by Caroline Young. Rather disappointing - I think that he should have let her rot in jail!

P.S. When I wanted Mum to watch the movie about the young Chanel, she said that she didn't want to watch a movie about 'that old traitor'.
She did watch it, though - reluctantly!

the entire connection with Winston Churchill was an long and interesting one, normal before WW2 and extraordinary once war broke out. Presumably Churchill himself was still uncertain about the wisdom of launching Britain full force against the Germans, and was prepared at least to listen to Chanel about a peace process. At that early stage, there were many senior German officers who thought Hitler was insane.

Chanel's true nastiness became clear later. As the war bogged down in hideous 1943, Chanel was becoming even more involved. She would act as a messenger to Churchill, and force the UK into an unequal peace treaty.