I don’t know the first thing about electro-magnetic waves, uranium radiation or atomic transmutation. But I did want to examine the life of the most famous of New Zealand’s three Nobel Prize winners.

Ernest Rutherford 1871–1937 was son of a farming family who had emigrated from Scotland to New Zealand for a healthier life style. Ernest was born at Brightwater, near Nelson, the fourth of their twelve children. He studied at the local school and then Nelson College and finally University of New Zealand. In 1895, after graduating and doing two years of research at the cutting edge of New Zealand’s electrical technology, Rutherford sailed for England on a scholarship. He did postgraduate study at the Cavendish Laboratory, Cambridge University during the years 1895–8.

At first Rutherford continued his research on magnetism, but the discovery of X-rays by Wilhelm Conrad Roentgen in November 1895 changed everything. In 1896, Rutherford was invited to share in the research on the induction of ionisation in gases by the Roentgen rays. During the investigation of radioactivity he coined the terms alpha and beta, to describe the two distinct types of radiation emitted by thorium and uranium.

In 1898 Rutherford was offered the chair of physics at McGill University in Montreal. At first Rutherford hesitated about accepting the offer, since he had already put down roots in one of the main centres of the scientific world. Montreal was much less famous. But the Physics Building at McGill had just been opened in 1893 and was one of the best equipped science buildings in the world. And the position offered was essentially a research post, important since Rutherford did not want to spend his days teaching and marking exam papers. 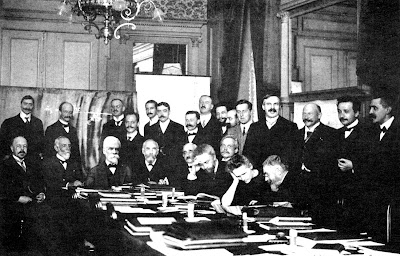 Rutherford never forgot his New Zealand origins. His fiancée, Mary Newton, was the daughter of his landlady at Christchurch in New Zealand. They were married there in 1900, then the honey-mooners returned to Canada.

It was during his nine years at McGill (1898-1907) that Rutherford published 69 papers, either alone or with one of his very fine young colleagues. Canada was very important in his career: the original work that he did at McGill was what later gained him the Nobel Prize in Chemistry 1908.

One of the best of his Montreal colleagues was the young English chemist Frederick Soddy who collaborated with Rutherford on research into the transmutation of elements. They worked together during the years 1900-3 although they probably didn’t realise that twenty years later, Soddy was going to win the Nobel Prize for Chemistry in 1921. It would be for his research in radioactive decay and particularly for his formulation of the theory of isotopes.

Anyhow Rutherford had demonstrated that radio-activity was the spontaneous disintegration of atoms. He noticed that a sample of radio-active material invariably took the same amount of time for half the sample to decay, its half-life. He created a practical application for this phenomenon using this constant rate of decay as a clock. This could then be used to help determine the actual age of the Earth which turned out to be much older than most of the scientists at the time believed.

In 1907 Rutherford took the chair of physics at the University of Manchester. There, along with German Hans Geiger and New Zealander Ernest Marsden, he did the experiments that revealed the nuclear nature of atoms. It was his interpretation of these experiments that led him to the Rutherford Model of the atom having a very small positively charged nucleus orbited by electrons.

A photo from the First Solvay Conference, the first world physics conference held in Brussels in 1911, became something of a legend. Three people will immediately be visible in this photo above: Marie Curie (seated), Ernest Rutherford (standing, 4th from right) and Albert Einstein (standing, 2nd from right). For a complete list of attendees, see Wikipedia. Rutherford was certainly clever, but he was also surrounded by equally clever minds.

Rutherford was knighted in 1914 and spent a long holiday back in New Zealand with his parents and siblings. In 1919 and 1924 he again did long tours of New Zealand, now a world famous scientist. Wherever he went, cities and towns put on civic receptions with packed crowds to listen to illustrated lectures on his work.

Straight after WW1 ended, he returned to the Cavendish as Director. Rutherford became the first person in 1919 to transmute one element into another when he converted nitrogen into oxygen via a nuclear reaction. In 1921 Rutherford worked with Niels Bohr 1885–1962 who postulated that electrons moved in specific orbits. Rutherford theorised about the existence of neutrons, which could somehow compensate for the repelling effect of the positive charges of protons by causing an attractive nuclear force and thus keeping the nuclei from breaking apart.

Bohr was a Danish physicist who made fundamental contributions to understanding atomic structure and quantum mechanics, for which he received the Nobel Prize in Physics in 1922. Bohr mentored and collaborated with many of the top physicists then at his Copenhagen institute. So to be complete, we should really examine the lives of the other brilliant scientists at Cavendish, to see how they interacted with and influenced Rutherford. After all, he didn’t win his Nobel Prize in a vacuum – four of his students and colleagues went on to win their own Nobel Prize.

Rutherford was admitted to the Order of Merit in 1925 and in 1931 was raised to the peerage via a new creation, Baron Rutherford of Nelson, of Cambridge. The title was chosen to honour his New Zealand origins, as did his coat of arms which included a kiwi and a Maori warrior. Baron Rutherford died in 1937 and was buried in Westminster Abbey, surrounded by other great scientific heroes.

The Rutherfords' only child, Eileen, married a mathematical physicist at the Cavendish Laboratory called Ralph Fowler. Alas she died tragically young in 1930.

My main references for scientific information were Rutherford - A Brief Biography by John Campbell and Ernest Rutherford's Life.

Hello:
We are slightly ashamed that there is so much about Rutherford of which, before reading this post, we knew very little. We have found it fascinating, not least the Brussels photograph which includes Marie Curie.

Additionally, we had no idea that Rutherford had been elevated to the peerage nor that his portrait had appeared on New Zealand bank notes. Within the UK we have never heard him referred to other than by his surname!

Jane and Lance,
isn't that the truth? That we know very little about people who used to be international giants in their chosen fields. Thank goodness for quality blogs, I say!

Kiwi
*blush* I must admit to ignoring our nearest neighbour as well. I have heaps of posts on France, Germany, Israel, Britain, Czechoslovakia etc and almost none on New Zealand.

foto
thank you...it is a great story to tell. Mind yoou, I am well out of my comfort zone in the hard sciences, but good history should still be told.

Rutherford was an interesting man.

Ruby
how right you are!

We moderns think that everything worth knowing has been invented, discovered or analysed in the last 10 years. But really the generation of Rutherford, Curie, Einstein, Bohr, Soddy etc was just as brilliant - or more so.

I think that is the youngest I have ever seen Einstein portrayed in a photograph.

Rutherford was obviously a genius, and it's good for the Kiwis to have a hero other than a footballer. Mind you, they DO have plenty of those. :-)

I, an Australian, get that all the time in Europe. You know what I mean... "who has Australia produced of note, other than Dame Nellie Melba, fierce soldiers and heaps of sports idols?"

art supplies
thank you. It would be nice to have a look at the other Nobel prize winners some day.