Johann Friedrich Städel (1728-1816 ) was a Frankfurt banker, a trader and a great art patron. Not having any children of his own, he decided in 1793 to bequeath his growing collection to an art foundation in his own city i.e an art collection for the public to enjoy and an art school for talented young painters. It took a number of years to establish the Städel Museum and Art School, but by 1816, it was starting to assemble a very fine collection of art.

The initial selection of paintings and sculpture was certainly based on Städel’s personal taste. But today the collection has increased to 2800 paintings and 600 sculptures, built up by donations and bequests from the citizens of Frankfurt. These works have moved far beyond the taste of one man, and are said to document the entire development of European art and culture since the late 19th century. 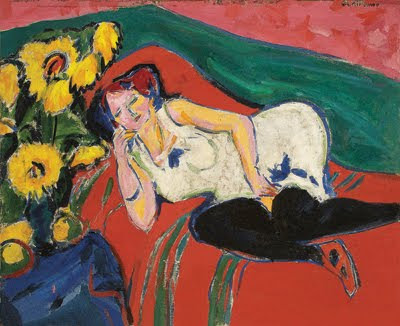 Germany may not have produced an avant-garde of their own in the 19th century, but local artists could see what was going on across the border. They read about it in leading German art magazines, or travelled to Paris on working holidays. And since Frankfurt was a sophisticated and liberal city, the Städel Museum collection could keep up to date in the art world. But it wasn't until after WW1 that  Städel showed a strong preference for German expressionist art. Even then, I wonder if the Städel's new collecting policy was totally popular amongst all German artists and gallery goers.

When the Städel Museum in Frankfurt decided to close its doors and to expand their existing building last year, every gallery in the world must have been keen to borrow all or part of the Städel collection for their own audiences. Luckily for Melbourne, the collection came here. The National Gallery of Victoria’s 2010 Melbourne Winter Masterpieces exhibition is currently showing a blockbuster show called European Masters: Städel Museum 19th-20th Century.

The museum holds a fine collection of German, Italian and Nether­land­ish painting from the 14th to 16th centuries, but Melbourne asked only for German and French works from the 19th century and early 20th century. The goal was to show the development of Western art as it moved towards modernism. Leaving Europe for the first time, this collection of some 100 works will be on display in Melbourne from June to October 2010. 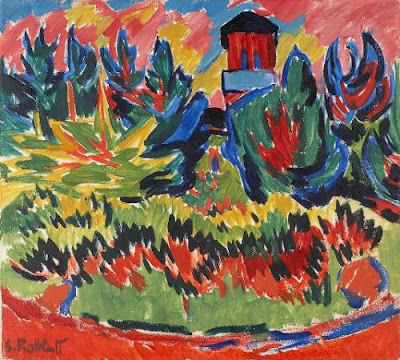 The exhibition has a bit of everything: neo-classicism, realism, impressionism, symbolism, nabism & expressionism are all covered in what must be a museum curator’s dilemma but a viewer’s great opportunity. Nonetheless I moved passed the French Realist and Impressionist artists rather quickly. That is not to say that Edgar Degas’ work on musicians and ballet dancers, the floaty Orchestra Musicians c1873, is not a delight to look at. It is! But I have seen French Impressionists many times before.

The French influence could be seen even into the 20th century; German expressionism emerged in Dresden in 1905 through Die Brucke, whose founders included artists Ernst Ludwig Kirchner and Emil Nolde, both of whom are represented in European Masters. These artists developed a style that was more abstracted, dark and reflective of the artist’s psychological state. They pursued a purity of form and colour, thus creating a truly German way of looking at the world.
* 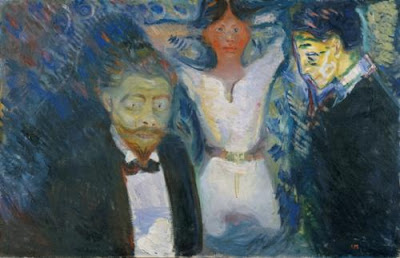 For me, I think the great pleasure in the exhibition came with Der Blaue Reiter/The Blue Rider works. The group was founded in 1911 by Wassily Kandinsky, Alexej von Jawlensky, Paul Klee, Franz Marc and August Macke. If you had to find the connection WITHIN the Blaue Reiter artists, I suppose it would be their seeking a creative spirit concealed within matter, and their belief that forms and colours were the external expression of this creative spirit. Sadly the group came to an abrupt end when soldiers Marc and Macke were killed during the First World War. Despite their close contact with French art earlier in their lives, both men died fighting against the French.

The director of the Städel described the collection as “about Western art with a certain German role”. He is correct; the European Masters exhibition is strongest when it traces the development of German art, introd­ucing Australians to German symbolism and German modernism from Max Slevogt, Max Liebermann, Edvard Munch (ok not German), Lovis Corinth and Karl Schmidt-Rottluff. Even people who go to galleries often will rarely have seen a Max Beckmann painting. 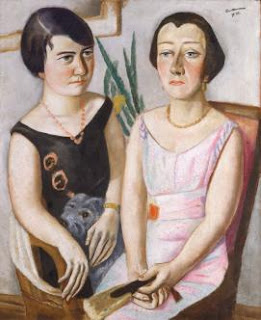 Raymond Gill gave information about one artist I'd not seen before. Hel­mut Kolle was apparently the lover of German art dealer and historian Wilhelm Uhde, who set up a gallery in Paris in 1905, championing the work of Picasso. The French government seized Uhde’s collection when WWI broke out and he was deported to Germany, although he resumed his influence on French art when he moved back to Paris after the war. The story of Kolle and Uhde is a good example of how culturally interconnected Germany and France were, despite their political and territorial differences. There was a long and special friendship between the two countries, particularly in the artistic and literary world.

The exhibition catalogue mentions the seizure of art works, once the Nazis came to power in Germany in 1933. The most outstanding examples of modern art in the Städel collection first disappeared into storage and then 77 paintings and 3 sculptures were confiscated. Some were displayed in the notorious Degenerate Art Exhibition that opened in Munich in 1937, but what was the ultimate fate of these 80 works – burnt? sold at auction? eventually returned to the Städel?

I'm not really a fan of these works but according to Wiki (which has several images of the 1937 exhibition):

After the exhibit, paintings were sorted out for sale and sold in Switzerland at auction; some pieces were acquired by museums, others by private collectors. Nazi officials took many for their private use: for example, Hermann Göring took fourteen valuable pieces, including a Van Gogh and a Cézanne. In March, 1939, the Berlin Fire Brigade burned approximately 4000 works which had little value on the international market.

A large amount of 'degenerate art' by Picasso, Dalí, Ernst, Klee, Léger and Miró was destroyed in a bonfire on the night of July 27, 1942 in the gardens of the Galerie nationale du Jeu de Paume in Paris.

Hels, fascinating I love reading your posts! The first image by Kirchner reminds me of works by a current artist Yvonne Maloney, her woman series. She has a great sense of color and vivre'

Even though I know senior Nazis took some of the paintings for their own private collections, it still strikes me as bizarre. After all, the degenerate art was removed from the public vision because it was WAy too dangerous to risk the minds and souls of decent people across Germany.

I can therefore understand destroying these dangerous works by fire, if they felt they HAD to rid the nation of very decadent material. At least the bonfire would have been consistent with their beliefs.

But taking art objects into their private collections suggested that senior Nazi officials realised it was perfectly fine art, not dangerous at all.

They were lying... imagine that!

Karena, I don't know Yvonne Maloney's work but you have raised one of the big issues in pre-World War One art. Fauvist colours, vibrant and usually not naturalistic, seemed to fade from favour in France but become quite popular in Germany under a different name.

I loved Fauvism, by the way.

You have a nice design and layout of this blogs.home business

Graphics
thanks. The Städel collection is indeed about Western art with a certain German role. Well worth seeing.

I can't believe my luck, actually. Every year the National Gallery of Victoria has a winter block buster and this year's is called:
Vienna: Art & Design Klimt, Schiele, Hoffmann, Loos. All my ships have come in at the same time :)

The exhibition will run from 18th June-9th Oct 2011. If you cannot get to Melbourne, make sure to look for the catalogue.

awesome! it was really excellent work! thanks a lot for sharing..

Nice painting, It gives an inspiration for paintings and in designing to, keep posting this kind of paintings.

Nice design by you and thanking for your post.

Awesome artist. I am watching this and I can’t believe this is art.I'm a beginner trying to learn some new techniques and this was perfect. I am a regular visitor of your web site and appreciate you taking the time to maintain the nice site. I will be a regular visitor for a really long time.Thanks for sharing with us.Keep it up. Clipping Path Service

Wow these arts are really so cool. I'd like to the banner design of my clipping path service website like this. Do you outsource this type service? Thanks and looking forward to hearing from you soon.