Sidi Bou Said sits on the Mediterranean Sea, in the very north of Tunisia. Originally a place of pilgrimage for visitors to the tomb of the C13th Sufi holy man Abou Said ibn Khalef, Tunisia's white and vivid blue town is still very attractive for travellers.

In fact when Lost T-Shirts wrote about the Top 10 things to do in Tunisia, #2 position was given to this town. "Sidi Bou Said, a picturesque blue-and-white-painted artist's town on a cliff overlooking the bay of Tunis. Follow the cobblestone street upward into town and get great views of the blue sea and marina. There are many small streets to wander around, and great places to sit and have a mint tea among a clowder of cats. You can reach Sidi Bou Said with a long metro/train ride from Tunis". 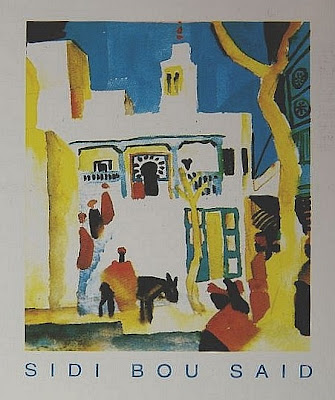 Wassily Kandinsky and Franz Marc were the main figures in the new Expressionist art group called Der Blaue Reiter, formed in 1911. Vigorous forms and colours were the external expressions of their creative spirit, so I was particularly interested in their influence on other, younger men who joined this Munich-centred organisation. Did they enjoy vigorous forms and colours as well?

August Macke (1887-1914) had lived most of his creative life in Bonn, with the exception of a few months spent in Switzerland and various trips to Paris, Italy and Holland. Macke and his friend Paul Klee considered themselves as part of Der Blaue Reiter, exhibiting and publishing together with their more mature colleagues.

Two of Macke's and Klee's art colleagues raved about North Africa - Wassily Kandinsky had been to Tunisia in 1904, and Henri Matisse had travelled to Algeria in 1906, and Morocco in 1912. The results of Kandinsky's and Matisse's North African experiences could be clearly seen in their art work back home in France! Klee and Macke wanted the same experience for themselves. So Paul Klee and August Macke arrived in Sidi Bou Said on Easter Monday in 1914.

Saudi Aramco World noted that in the span of only two weeks in 1914, Klee created nearly 50 watercolours and hundreds of sketches; Macke took many photographs, as well as making hundreds of sketches and watercolours. Macke, more than Klee, was fascinated by Tunisian dress and the Tunisian way of life, and produced a series of sketches that have both ethnographic and artistic value. The two young men made some preliminary studies of sites in Sidi Bou Said, with Macke focusing on a cafe with a white rectangular minaret looming over it. 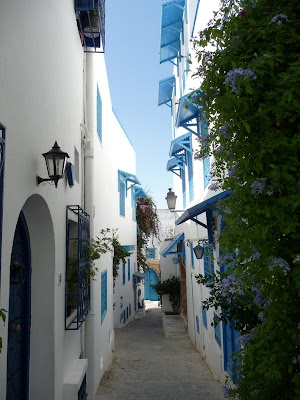 
Half of France and all of Germany had never seen colours like the artists saw in Sidi Bou Said in those bohemian days before WW1. When painting or sketching in the bright light of Sidi Bou Said, the grey and gloomy skies of their home towns must have seen like another world to the young artists. Mrs. Darrow’s Adventures in Tunisia blog and Some landscapes blog specifically examined the different impact of Sidi Bou Said’s colours on Macke’s and Klee’s art. I recommend the two articles to you.

Just two years later Soldier Macke was tragically killed in a WW1 battle, but his version of Sidi Bou Said still interests people decades after his death. Note one discrepancy. While the Macke work was filled with light and colour, there was no  bright blue on the buildings. Apparently a French painter-musicologist called Baron Rodolphe d’Erlanger didn't apply the blue-white theme all over the town until straight after WW1 ended.

Today shiploads of German, French and English tourists arrive, going past the souvenir sellers and photographing Macke's view of Cafe des Nattes. And when people walk inside the town, it was and still is a labyrinth of winding streets, filled with flower-filled courtyards; heavy, vivid blue doorways; verandas closed against the summer heat; and unexpected flights of steps. 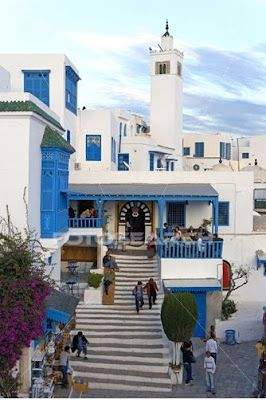 Because I was most interested in Macke in this post, I have almost neglected Klee. So interested readers should read the two bloggers (above) who discussed the impact of Tunisia on Klee's paintings. Klee was passionate about city architecture and landscape paints, and took particular delight in the lush gardens of Tunisia. In fact the palm became one of the central motifs in Klee's Tunisian paintings and drawings. Even more impressively, June Taboroff quoted extensively from Klee's diary, written during his stay in Sidi Bou Said. 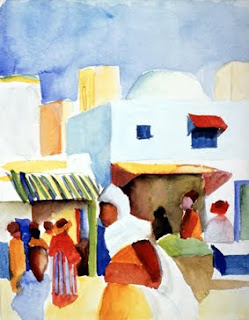 Cafe des Nattes is still lovely, but I recommend that people have their mint teas on the outdoor terraces, overlooking the water. Once the heat of the day has passed, and the citrus trees flood the town with their smell, life is very good.

One of my top five favorite places in the world. And I agree with BigJack about tea spots.

It seems you are in good company, Jack and Giulia :) Simone de Beauvoir really loved the bougainvilleas and the jasmine that were all around town in Sidi Bou Said.

Never been - the heat would be too much for me - but I can see the fascination for an artist.

Must step in from the 100 degree/humidity from Washington, DC to say that I've been in Tunis, Sidi Bou Said, Hammamet, Nabeul, etc. in March & April & it was temperate compared to so many places. I think people see: 'Africa' & think oh god no, the heat.

I popped down from university in France one time & it was 2 weeks of about 75-78 F w/little humidity. Tunisia has the desert to the south, moderate coastal temps further up. A lot mixed into one small place. That's why so many films have been made there. That's more than my two cents...

I'm glad to know that it's temperate at times. It's so beautiful, I do want to go there.

I love Klee's paintings, but do prefer Macke's images of Tunisia.

Love Macke's impression of Tunisia above. It's a place in the world I haven't been, but have wanted to visit.
Roll on early retirement!

Thanks again and looking forward for your post on making more.part time jobs

I love painting...although I'm not a good painter. But my son Jeremiah, 8, can draw well. I posted some of his drawing in my blog. Just lately he tried painting using water color. He was amazed to see after he painted some hermit crabs with yellow, blue and red..and made them his pets! We live near the shore.

Danny, I can see from your work that you are a colourist. Macke and Klee would have admired it, way back before WW1 :)

Thanks for sharing the idea there would be some apprehensions from segment but i am up for it.
trazado de recorte

Intelliblog has a beautiful painting down by Macke early in 1914. Since Macke was killed in war in September 1914, Girls Under Trees must have been one of his last works as a civilian.