I have always had a passion for travel posters. By the late 19th century the art work for travel posters was already very interesting, but at that stage, most ordinary families realised that the promised excitement of Venice or Cairo was not meant for them. 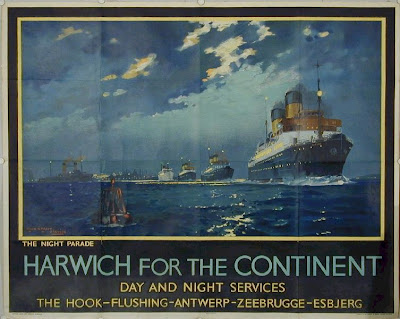 Day and night services on the three sister ferries

It was only just before WW2 broke out and especially after it ended that package holidays opened up travel options for the non-wealthy. So it was very interesting to hear of a travel poster exhibition at the National Railway Museum in York Feb-Sep 2010. Called Once Upon a Tide, North Sea Ferry Tales, this exhibition has focused on the romance and excitement of international travel. In partnership with the National Railway Museum in the Netherlands, York Museum’s excellent poster collection has been used to explore the Harwich-Hook ferry route.

The NRM curators reminded the modern viewer that since 1867, ferries transporting passengers to Holland have been one of Britain’s main links with Europe. The first ferry, the Avalon, took 13 hours to steam from Harwich in Britain to the coast of Holland. But bigger, faster ships soon followed.

And the trip represented more than just a connection to the Dutch coastline. In 1890, the service began calling at Hook; and Hook was itself connected to the rest of Europe by rail in 1904. For the next 60 years, a system of boat trains linked with the day and night sailings from Harwich.

Visitors to the exhibition can explore the personal recollections of travellers throughout over 100 years of North Sea crossings, and from Hook to Europe’s holiday hot spots, including Switzerland, Berlin and Rome. 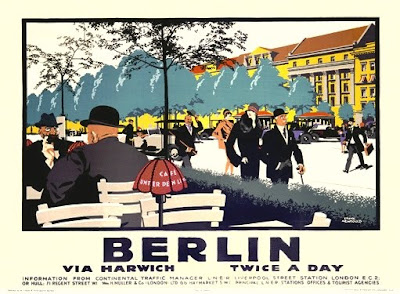 Almost always, the posters relied on powerful graphic design. The images were simple, the posters were not cluttered with too much text and the colours were clear and strong. The poster designers had to assume that they had only 30 seconds of the viewer’s time to impress the eye and to attract his/her closer attention. In the case of modern and efficient transport, the images had to be dynamic; the angled windows and sleek ships gave the posters a feeling of movement.

Once travel became a realistic option for the non-wealthy, a myriad of travel destinations competed for tourists. Posters had to lure tourists to Paris, Amsterdam, Venice and many other places. The poster-mad travel industry elevated advertising to an art form by romanticising and stylising their product, including the methods of transport and the possible destinations. The glamorous world of European café society and wide boulevards was a recurring theme of the advertising campaigns before WW2. Even service on board the ferry looked both modern and attentive. 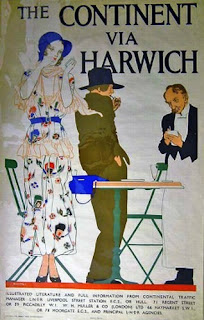 A fine poster showed the three sister ferries (Prague, Vienna and Amsterdam - see above) that were built by John Brown of Clydebank in 1929. The Antwerp 1920 was also visible on the left side of the poster.

The Blue Lantern blog has raised another important point. In parallel to the travel posters, consider the emergence of beautifully illustrated travel magazines in the 1930s, directed at women. New styles in clothing offered freedom of movement and there was the possibility of adventure, especially at slightly exotic beach resorts. Examine the superbly simple graphic design in the travel advertisements that Jane selected.
Posted by Hels at 27.7.10

I love the posters.

I wonder what socio-economic group was travelling after WWII? The aristocracy and wealthy would always have been able to travel, so I suppose there was an emerging middle class of travellers.

Certainly the British & European migrants that were neighbours in the housing commission area I grew up in were not travellers for amusement - they were seeking a better life. Many had assisted passages.

I love the posters, too. Oddly, I feel a kind of nostalgia for these graphics, even though I never really expereinced them.

I too have travelled on the Hook to Harwich trip - in 1977 - on my return from living and working in Frankfurt, (having travelled on the Rheingold Express from Frankfurt to the Hook). I had a slight hitch - overslept upon arrival in the Hook, and missed the ship, so had to stay overnight. All the result of drinking too much wine at dinner.

Thank you everybody. I have been on the Dover-Calais link myself and found it perfectly functional, but definitely not sexy.

These travel posters were definitely targetting families with just enough extra money for a two week holiday on the Continent. It was to be fun, romantic, exciting and novel, but it was only for a short time and it was not ridiculously expensive. After the holiday was over, the families would have to go back to work and school, as usual.

What a lovely post! I love those posters. I went to a French restaurant for breakfast the other day and it was full of Parisian posters of a similar style to these. I would have loved to walk down the streets in the days when that kind of advertising was all around.

If you look hard, you can still find it painted into the sides of buildings in London. I must take a photo of one particular building near my work.

All posters that you post are fascinating. I love it too. I was curious in that first picture. I wonder where it is going to use.

The first poster was the victim of a famous graffiti:
"Harwich for the Continent - Frinton for the Incontinent"