The 1879 Sydney International Exhibition was held under the supervision of NSW’s Agricultural Society. There was initially some discussion about the Exhibition commemorating Cook’s discovery of Australia’s East coast. But a more urgent theme was emerging: a national interest in technical & industrial development, both in tertiary education and in the creation of museums.

After all, the Inter-colonial Exhibition of 1867 in Melbourne had been such a great stimulus that the NSW government bought many of the exhibits to place in the brand new Technological, Industrial and Sanitary Museum (later the Powerhouse Museum of Applied Arts and Sciences). Industrial development was a hot topic.

Furthermore the Sydney International Exhibition of 1879 would be the first World Exhibition in the southern hemisphere, far from the cultural and commercial centres of Europe. So there may have been a bit of national showing off involved.

In 1879, architect James Barnet was put in charge of the Sydney International Exhibition building. It was to be in the grounds of the Royal Botanic Gardens because the harbour frontage was so attractive, but in the end it occupied land that was just outside the Gardens.

The Colonial Architect’s Office completed this huge task in nine months, including preparing the drawings, management of the project accounts and payments, and supervision of the building. The Exhibition Building used the first electric light in Sydney, imported from Britain, to get through the project with around-the-clock shifts. To show you how early in electricity’s history this was, it would be another 25 years before a Lady Mayoress turned on the switch to illuminate Sydney streets, using power from Pyrmont Power Station 1904.

Sydney’s Exhibition Building was similar in design to Crystal Palace in London and similar also to the Royal Exhibition Building in Melbourne.  And it was set in gorgeous garden settings, like these two other cities, thus inspiring the NSW Premier Sir Henry Parkes to call it the Garden Palace. 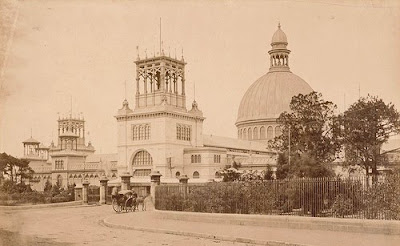 The Italianate building consisted of 3 double storey, turreted wings meeting beneath a central dome which dominated Sydney's harbour skyline. Sydney's first hydraulic lift was contained in the north tower. Directly under its 64m high central dome was a fountain, and a huge statue of Queen Victoria. Inside there were excellent facilities including restaurants, an oyster bar and tea rooms. There was only one structural problem - there had been no time to use permanent and fire-retardant materials. Aside from the brick used in the foundations and the entrance towers, the majority of this vastly enormous building was wood and corrugated iron.
*
Garden Palace had an impressive opening ceremony, in Sep 1879. Paolo Giorza (1832-1914) from Milano moved to Australia in late 1871. Politician Sir Patrick Jennings, a passionate music-lover, chose Giorza as director of music for the exhibition. Giorza was commissioned to compose the grand celebratory opening cantata which was scored for a large chorus and children's choir, soloists and a full orchestra. During the exhibition, Giorza also provided daily concerts, some of them grand orchestral and choral occasions, with Handel's oratorios prominent as well as band and chamber music and piano recitals.

Spectacular pieces from the Sèvres porcelain factory, established in 1738 at Chateau de Vincennes, were among the many decorative art items sent by France for the 1879 Exhibition, to demonstrate France’s rich cultural heritage. One label said: “this vase was a gift from the French commissioner which acknowledged "proof of the lively and sincere sympathy of my Government for your flourishing colony but above all a token of the full appreciation my countrymen have of the energy and freedom of the inhabitants of Australia, freedom extended to all, whatever may be their origin." 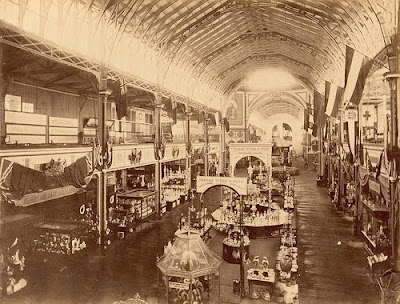 By the time the Sydney Exhibition closed in April 1880, a million visitors had paid to go through the turnstiles. Architect James Barnet might have been criticised in Parliament because the project greatly overran its budget and the Exhibition lost money. Yet the exhibition was judged a determining landmark in the history of the NSW Colony, marking that state's sense of achievement, progress and aspirations on the world stage.

Some collections, put together for the 1879 Exhibition, lasted. The paintings in the fine arts display, for example, became the nucleus of the government’s art collection. The first purpose-built art gallery building was opened in 1884, only 5 years later.

According to Scratching Sydney's Surface, the Garden Palace was originally intended as a temporary structure, but as it had proved such a success, the authorities decided to keep it.  So when the timber Palace was completely engulfed by fire in Sep 1882 and destroyed, it was a total disaster. The newspapers suggested three possible reasons for the blaze. One theory was that wealthy Macquarie St residents, upset their harbour views had been stolen by the giant building, lit the blaze. Another was that it was burnt to destroy the 1881 census. Stored in the Garden Palace, the records apparently exposed embarrassing secrets about the convict origins of many leading families. Or possibly the fire was just an accident. 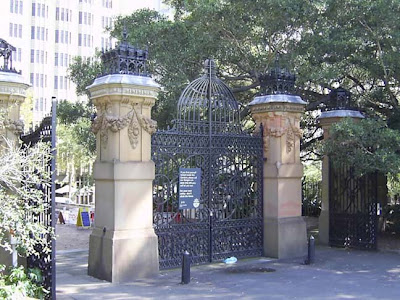 What remains of the Garden Palace today? Nothing, really. Even the beautifully carved sandstone gateposts and wrought iron gates, located on the Macquarie Street entrance to the Royal Botanical Gardens, were built as an entrance to the new gardens in 1888.  And the one artefact from the 1879 Exhibition that did survive the fire - a carved graphite statue of an elephant, from Ceylon - is displayed elsewhere (at the Powerhouse Museum). A 1940s-era sunken garden, and fountain featuring a statue of Cupid, merely mark the location of the Palace's once impressive dome.
Posted by Hels at 23.7.10

A sad story to lose such a fine building.

I have a post on the Cupid fountain on my blog.
http://sydney-city.blogspot.com/2009/05/botanic-gardens-cupid-fountain.html

Hi, I'm sorry to throw water on the fire about the elephant story -but we have been doing some research on this subject recently and it appears that the elephant may not have in fact survived the fire. I hope to post the findings on the Powerhouse blog sometime soon. Will keep you posted. Geoff.

Thanks for the feedback Geoff. The burning of the building and the destruction of many of the objects inside was horrible, so I hope at least some items did survive.

If Scratching Sydney's Surface is correct, and the Garden Palace was truly intended as a temporary structure, then the loss of the building would have been expected. But at least every painting, book, instrument, census record etc could have been cleared out to safety first.

J Bar,
I created a link to your cupid fountain right away, many thanks.

Am I right in believing that there were a number of government archives there? I heard a podcast about the Garden Palace on the ABC and I thought at the time what a loss that must have been.

residentjudge, you are half correct.

The NSW State Records Office certainly said the following: The 1891 census was the first census to survive in substance after the 1841 census. Records of the intervening censuses are believed to have been destroyed in the Garden Palace fire on 22 Sept 1882. What an irreplaceable tragedy.

Now to another loss of documents, alluded to in my post. State Records NSW say a 1880 Colonial Secretary letter documents the recall and disposal of "convict records" between 1869 and 1880, in particular the very significant and carefully planned destruction of Convict records which took place in late 1870. The loss of archival records was indeed huge, but it was NOT an accident.
See http://archivesoutside.records.nsw.gov.au/staff-picks-1870-convict-records-disposal-schedule/

Many of these international and national exhibitions are fascinating insights as to the design capabillities of the particular era. I personally always find the official guides that go with them a great read.

In my own reading, I have concentrated on the International Exhibitions of 1851 until the 1920s and am always impressed by the excitement generated by modern science, technology and design. It was as if each host nation was stating that there was no limit to modernity and progress.

I would like to say this is an excellent blog that I have ever come across. Very informative. Please write more so that we can get more details.

It's always nice when you can not only be informed, but also get knowledge, from these type of blog, nice entry. Thanks

World fairs are amongst my very favourite topics, including their architecture. Sydney's would have been terrific, had it survived. Apart from anything else, its location in the park and overlooking the harbour were top class.

Another great article. I like that you are very honest and direct to the point.

Apron
thanks :)
Was there ever a world fair or international exhibition in the Subcontinent?

It’s glad to see good information being convey. Its a very nice written, and i really like these blog. Thanks for the info.

International Exhibitions were certainly the last word in Victorian progress and learning. They must have been fantastic to visit, including and especially in Sydney's beautiful building.

I always learn something new from your post!Great article. I wish I could write so well.

It’s glad to see good information being convey. Its a very nice written, and i really like these blog. Thanks for the info.

Love the Garden Palace and first wrote about it in the mid-80s for a book on demolished Australian buildings. If you don't mind a plug, I've just posted the first part of a Garden Palace blog at www.davidlatta.org

I created a link straight away to your post about Sydney's Garden Palace. Many thanks.

Thanks for taking the time to discuss this, I feel strongly about it and love learning more on this topic.

Hi, I have just visited your site and the info you have covered has been of great interest to me.

thank you. World fairs are always a great topic, but Sydney in particular because almost no-one knows the history of the destroyed architecture.

In reality your creative writing abilities has inspired me to begin my own Blog website now.

why not, cctv? I hope it is a history-related blog :)