Born in Budapest, Theodore Herzl (1860-1904) identified with the Germanic world of Vienna and its culture. Yet working in government service was problematic for a Jew, even a very educated, secular Jew. So Herzl decided on journalism and moved, in the first instance, to France.

In 1895 the young journalist was assigned to report on the ceremony that publicly stripped French Captain Alfred Dreyfus of his military rank for espionage. The Dreyfus Affair ended Herzl’s dream that any educated, cultivated citizen could partake of the benefits of a cultured nation. 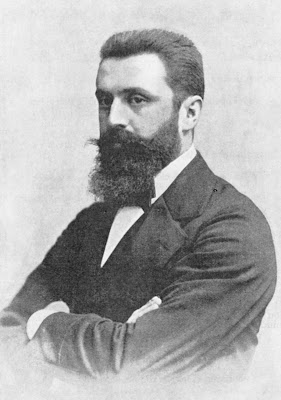 Theodore Herzl, late 1890s
As an enthusiastic product of the Enlightenment, Herzl had been deeply shocked by the Dreyfus affair. He had to confront the fact that rampant European anti-Semitism endangered the secular Jew no less than the religious Jew.

Soon after the Dreyfus trial, Herzl wrote his definitive work: Judenstadt 1896. He had quickly became convinced that the only solution to anti-Semitism was the establishment of a Jewish state.

Jewish leaders were sceptical, especially given Herzl's complete rejection of Jewish religious values. Nevertheless in 1897 Herzl organised the First Zionist Congress in Basel Switzerland. Herzl's keen organisational skills brought together Jews from 16 countries, to debate the creation of a Jewish State. Naturally the biggest delegations came from Eastern Europe which was where most Jews lived. 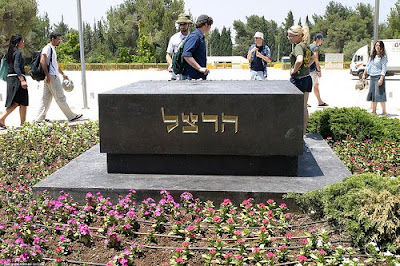 Herzl's grave on Mt Herzl, Jerusalem
Saving the Jewish people might have come as a bolt out of the blue for Herzl, but once he was inspired, he seemed to work tirelessly for his cause until his death in 1904. He visited every politician and decision-maker across Europe and the Middle East, looking for someone to approve his charter for a Jewish State. His project didn’t succeed and worse still, he managed to exhaust his family's fortune in the effort. But Herzl was, above all, dedicated.

Forty four years after Herzl died and three years after the last gas chambers were closed in central and eastern Europe, the State of Israel was declared in 1948. As you would expect from a new nation, streets, currency and institutions were named after its own national heroes. Yet when the Herzl Museum on Mt Herzl in Jerusalem was initially opened in 1960, the hordes of expected visitors did not arrive. And those who did arrive found the presentation of the material too old fashioned. Eventually the museum closed up. 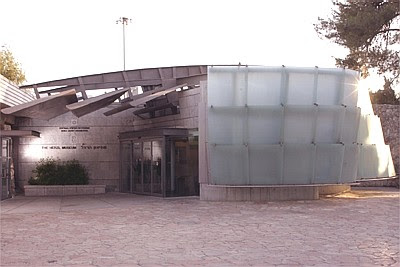 Herzl Museum, re-opened 2005
Herzl wasn't forgotten, of course. Mt Herzl continued to grow as a military cemetery and was the burial site of many great Israeli leaders including Yitzhak Rabin and Golda Meir. Theodor Herzl's tomb was at the very centre of visitors’ attraction.

In the new century, The Herzl Museum has been modernised (in terms of museology) and rebuilt, still located just inside the entrance to Mt Herzl Jerusalem. This museum, which reopened in 2005, included a replica of Herzl's study and library.

But now the Herzl Museum has created a multi-media presentation that will help students (and adults) immerse themselves in late 19th century Europe. An hour-long video creatively portrays Herzl’s motivations and visions, in Hebrew, Russian (the second most common language in Israel), English and three other languages. 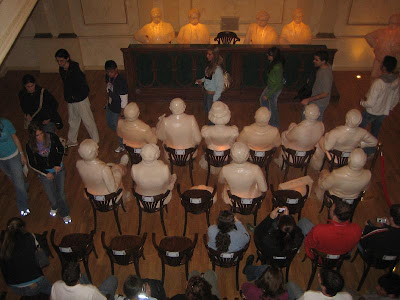 1897 Congress in Basel (Room 2)
The museum is divided into four rooms where modern visitors literally sit alongside 1890s Europeans.
*Room One is 19th century Europe, recreating the anti-Semitism of the streets of large cities and small towns. Visitors watch distressing glimpses of the Dreyfus Affair and the trial’s impact on Herzl the journalist, writer and Jew.
*Room Two is a stylish reenactment of the Zionist Congresses held in Basel and a recreation of Herzl’s activities throughout the decade.
*Room Three is a replica of Herzl’s study, in the last years of his eventful life and of Herzl’s writing for a future Jewish state.
*Room Four is an imagined comparison between Herzl’s dream for a state as expressed in his writings, and the reality of the modern state. 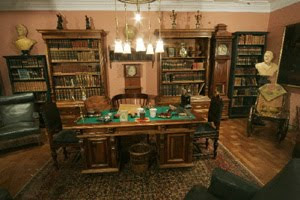 Herzl's library (Room 3)
The Herzl Museum is trying to bridge 19th century Europe with the future of the Jewish state, especially for people not even born when the state was created in 1948. I have been trying to discover if this method of museum experience helps the modern viewer get into the mind and times of Herzl, but almost no reviews of the museum have been helpful in this regard. Only Finding Felafel said the Theodore Herzl Museum is a multimedia experience that puts visitors in Herzl's place in late 1800s Vienna... it is where we can feel the anti-Semitism that he once did. We can trace his steps in establishing the World Zionist Congress that led to the State of Israel 50 years later.
Posted by Hels at 19.7.10

I'd heard of him but never read further. The Dreyfus case was a turning point for many intelligent Jews of the time, a terrible hint of what was to come.

Another great example. Pissarro had given his all to the French art world, supported and acted as father to all the young impressionists, wrote art theory books, organised the Salon des Refusés etc etc yet he too was devastated by the Dreyfus travesty of justice. I think educated, cultivated Jewish Europeans believed they were part of general European culture... until they found out they were not!

"I think educated, cultivated Jewish Europeans believed they were part of general European culture... until they found out they were not!"

No doubt about it. You can find this everywhere in letters, diaries, & so forth.

Thanks for the post. I went to school & lived in (Strasbourg) France from 17-19 years old (too long ago to say) & then Jerusalem in the mid-80s, also at university.(As a non-Jew, so that was it's own interesting experience, I can say -- anecdotally -- that I knew more about this than most Jewish students. It was shocking & disheartening). It pains me still how little people know about the earlier history in Europe & Herzl's journey. (Pissaro was a good example to use.)

Perhaps the most international person in the world was Sarah Bernhardt. She was French and European of course, but was very comfortable all over the world. Yet when the Dreyfus trials and imprisonments dragged on, Sarah Bernhardt had to face virulent anti-Semitism in her own career.

The irony was... Bernhardt had converted to Catholicism years and years earlier, so she wasn't even Jewish.

Yes,about Bernhardt. But it doesn't matter to anti-Semites if someone has converted, as you know.

The SS command at Auschwitz faced a bureaucratic quandary as the Allies were making their (difficult) way across France towards Berlin & beyond. Should they move my great-grandfather from the political prisoner block to the Jewish block? What to do? Seriously.

This was a matter for memoranda & meeting minutes. He had one Jewish grandparent.

The idea that a relatively low-level Resistance member's camp block "assignment" would be a matter of discussion, much less bureaucratic dithering, would be hilarious if not so tragic. It is funny on an absurdist level.

It's also difficult to fathom on a purely existential basis--as in those officers & their existence. "We must have a meeting about this most important matter, though the Allies are gaining on us." Shows you the extremity & bizarre nature of anti-Semitism & the "blood" matter business. To me, it seems a psychosis.

(In the end, they left him in the political prisoner block at Auschwitz. I never met him, so that tells you his ending.)

Irène Némirovsky, for instance, knew all about this "blood" business. I admire her writing but I do see the anti-Semitism. You probably know this, but the introduction in the French edition of Suite Française that refers to her as a self-hating Jew was cut in the English/American editions. Claiming convert status did not save her, sadly.

Well, I've taken up too much of your time & am now running behind. I enjoy your blog very much.

You have made a nice website,very well organized ,i let you a few links to mi websites,have a nice day,i will visit you again soon to see if you post something new,Raul Gonzales from Madrid
Nehoiu online Marketing Asesinos seriales Directorio web SEO

This is really interesting read about museum.
work from home

Hels, I love your posts on Jewish history as they are always so fascinating and I always learn something new. I had friends who went to Herzlia school in Cape Town - now I know where the name came from.

This museum looking really interesting and I would love to visit it one day. When I went to the Ellis Island exhibit, it was similar in that you walked into rooms where scenes had been laid out and the whole thing was quite interactive on a number of levels. It is not the same, obviously, but I think people would find it quite engaging.

Emm, I think it IS a good comparison. Museums have often been static displays of objects that people could look at, but not necessarily engage with.

The new Herzl Museum, the Ellis Island exhibition and the Titanic Exhibition on in Melbourne at this very moment are successful attempts to immerse the modern viewer in long gone experiences. As the visitor enters the Titanic Exhibition, he is given the name of a real passenger. Only at the very end of the experience does the visitor discover whether his character survived or drowned.

That is a great idea with the passenger name!!! I must say, I found the exhibit in Liverpool to be quite chilling. I stood for hours looking at an apron / pinafore that someone had been wearing and I could just about imagine it in the icy ocean waters.

its a great pleasure to listen about museum.This museum looking really interesting and I would love to visit it one day. When I went to the Ellis Island exhibit, it was similar in that you walked into rooms where scenes had been laid out and the whole thing was quite interactive on a number of levels. It is not the same, obviously, but I think people would find it quite engaging.