Marianne North (1830-1890) was the eldest child of an MP in the British Parliament. She had shown an interest in painting and writing, proper accomplishments for a young Victorian lady and suitable hobbies, but not career, for the daughter of an upper middle class family. 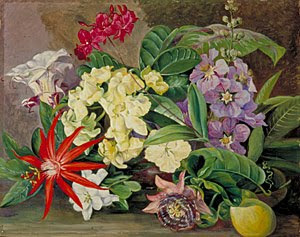 Her father Frederick North certainly introduced her to the great and the good in the world of politics and of science. Frederick travelled throughout Europe and the Middle East, on both business and pleasure, and Marianne would often accompany him. On these trips, she learned to improve her skills as an artist, being taught first by a Dutch woman artist, and later by Valentine Bartholomew, a flower painter connected to the royal court. While visiting Kew, she met Sir William Hooker who presented her with specimens to sketch. But she had little formal training in drawing and painting. 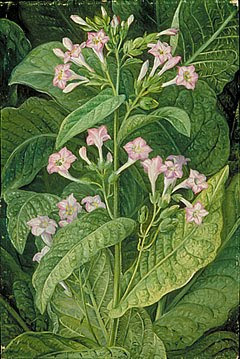 And, as Edwardian Promenade has shown, there was new wave of lady explorers travelling the globe not as mere appendages to their male kinfolk, but as scholars in their own right. This blog also lists some wonderful books on Victorian lady travellers and scholars.

Her first journey alone was in 1871, when she travelled via Jamaica to the United States and Canada. Being well connected from birth, she of course had suitable letters of introduction, so initially it would seem that her travels were comfortably looked after. However sometimes she had to make her way through rough landscape, scaling cliffs and enduring swarms of insects.

North learned to paint in a fast, impressionistic style that was seen as either a feminine weakness or a scientific triumph, full of vitality. She understood plant taxonomy, being a keen naturalist herself, and had a number of species named after her.

Her second solo journey took her to the jungles of Brasil, where she stayed for 8 months and completed 100+ paintings. Then in 1875 she travelled across America on her way to Japan and Ceylon, then she returned home. In a very short time, she was on her way again, this time to India. She remained in India for 15 months and produced a remarkable 200 paintings of mostly plants, but also of the local buildings she liked. Upon her return to London in 1879 she exhibited her work at The Conduit Street Galleries, where visitors seemed to enjoy her work.  LITTLE AUGURY, Heather on her travels and Squidoo blogs have image after image of North’s beautiful work 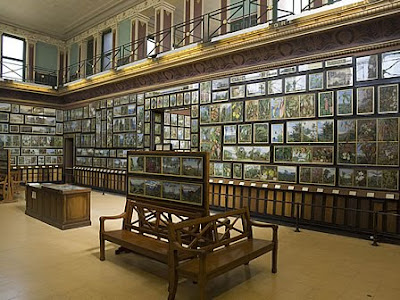 
In 1879 she wrote to the Director of the Royal Botanic Gardens Sir Joseph Hooker, suggesting that she bequeath her collected works, along with a building suitable to house them, to his Gardens at Kew. There was only one extra request: that this site should serve as place for garden visitors to rest. Her donation was accepted and Kew gained one of it most significant components, The Marianne North Gallery. Her friend, architectural historian James Fergusson, designed the building after her favourite Indian colonial sites. Later (in the 1880s) she carefully arranged all her 832 paintings in a dense mosaic on the walls, sorted according to geographical location of subject.

Charles Darwin, a close friend of old Mr North, encouraged Marianne to travel to Australia and New Zealand, to paint Antipodean native plants in oils. In that expedition she met and befriended the younger artist, Marian Ellis Rowan, an important meeting, as we will see next post. In the meantime it is of interest to note, according to Laura Ponsonby, that North considered Darwin the greatest man living and had hoped that he would open her Gallery in 1882. Sadly he died some weeks before the event.

In 1883 North was in the Seychelles and in 1884 in Chile, still painting. After a life time of travel, no mean feat for a woman of that era, having led an adventurous, productive life. She retired to Gloucestershire, where she died in Aug 1890. 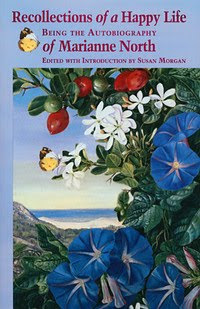 Her book, published 1892, two years after her death

After her death, Marianne’s extensive journals were edited and cleaned up by her sister, Catherine North Symonds, and published in two volumes in 1892 as Recollections of a Happy Life: Being the Autobiography of Marianne North, London, Macmillan, 1892.

Marianne North was the best connected and the most intrepid woman artist of this era, but was her oeuvre considered popular and talented during her own life time? I can find a few contemporary references to her work by admiring women activists, but none by male artists.

Florilegia, collections of flower paintings, have been done since Sir Joseph Banks depicted and published images of plants he collected on the Endeavour in the 1760s. Yet it is only now (1995) that Chelsea Physic Garden established its own Florilegium Society whose primary aim is the portrayal of the Garden's entire collection. These modern scientific artists would have loved having North as part of their team.

In the next post, I will write Amazing botanical artist II - Marian Ellis Rowan.

Marianne North's collection is one place I always make sure to visit when I'm at Kew Gardens. The dense, colourful display she created is almost more impressive than the paintings themselves!

I am always struck by just how much women achieve when given the independence, financial and othrwise, with which to follow their dreams.

What a wonderful collection of this master artist's work. I wish I could see it in person.

Thanks everyone. I wish I could find some contemporary reviews of North's art, by other artists, collectors or art critics. Knowing that writer George Eliot admired North's paintings is interesting in feminist circles, but not very helpful in art circles.

Any contemporary references to her art would be gratefully received.

Sue said...
My first introduction to Marianne North was through a book I picked up in Santiago Chile at the gallery. It is “Chilean Flora Through the Eyes of Marianne North.” It is a beautifully illustrated book and very informative as well. From the moment I opened the book I was enthralled by this amazing woman and her adventurous spirit.

As an amateur painter I was also very taken with her in-situ style of painting, which said so much more about her as an observer and chronicler than as a painter. As you can see below I am involved in the area of ecotourism and have studied extensively in this field. What a thrill to discover a woman who was so ahead of her time I feel as though I have found a kindred spirit.

Now why am I writing to you? Because I get the impression that you have the same admiration for Marianne and other similarly interesting women of the past.

I have a desire to further explore anything written about women explorers of the period and have done some internet research into this. But I was hoping that you may be able to suggest a good starting point.

My ultimate desire is still a bit vague but was even thinking of trying to retrace the journeys of Ms. North within Australia and In Chile. This idea is very much at the concept stage.

I would be very interested in any information you may be able to give me, be it book references or web sites or essays.

Hels said...
What an amazing project - I hope it comes off for you :)

1]North, M Recollections of a Happy Life, Being the Autobiography of Marianne North, Biolife LLC, 2009. This was my main reference.

3]North, M and Symonds, Janet Some further recollections of a happy life, selected from the journals of Marianne North, chiefly between the years 1859 and 1869, London, Macmillan, 1893.

Hello Helen
Found your website regarding Marianne North - she truly was an amazing artist - so much talent & a woman way before her time.

Marianne's father, Frederick North, had a brother named Dudley. Dudley married my GG Grandmother's Sister, Sarah Lockyer in Sydney in 1835. Sarah Lockyer's Father (Major Edmund Lockyer) contributed a great deal to Australia's History - he was also an Artist, there is 1 or 2 of his paintings/sketches in our National Library - the remainder are in Private Collections in the UK.

Both families, the Lockyers & the Norths, have a heritage to be admired..Marianne is now linked to the early days of Australian Pioneers.


Helen said...
Pamela you are a champion :) And you come from a fine family.

I have kept your reference urls, should anyone want to pursue their research further. Many thanks

You have missed out one interesting point. When Marianne learned from the artists you mention, she was working in watercolour. She was introduced to Oil Painting by the famous Australian artist Robert Dowling, and took to it 'as a Scotsman does to dram-drinking'.

Anon
How fantastic! Robert Dowling was known for many subjects: portraits, elegant estates, genre and social history themes... but not botanical images. So I am delighted they got together, at least in an artistic collaboration :)

I am doing my PhD dissertation on Marianne North at Cambridge. Love to see so much interest in North and her work and appreciate your post very much.

Could you point me to a source regarding Geo. Eliot's admiration for North. I know from the correspondences kept at Kew that North read the author during her travels, I never knew the feelings were mutual.

Moe
what a great thesis topic. I hope it goes well.

I cannot help you, except to give you the reference I read in which Eliot's name was used in passing.
Abundant Beauty: The Adventurous Travels of Marianne North, Botanical Artist, by Marianne North with an introduction by Laura Ponsonby.

Even then, I wasn't confident enough to refer to Eliot in the body of the text. Just in the Comments section.

Thanks, Hels - I've just now got it on my Kindle - I'll have a look. Warmest wishes, Moe.

I have added a link to Hermes' article on Kew Gardens and Marianne North.

THE RADICAL VICTORIAN LADY BEHIND AN ESSENTIAL COLLECTION OF BOTANICAL ART has some beautiful images of Ms Morth's paintings.

Thank you. That is a great reference.