Gillian Forwood prepared the excellent catalogue, The Babe is Wise: Lina Bryans and her Portraits, the Ian Potter Gallery’s retrospective exhibition in 1995. And she wrote the 2003 book Lina Bryans, Rare Modern 1909-2000, excellent references for this post. So was Modern Australian Women: Paintings and prints 1925-1945, held in the Art Gallery of South Australia in 2000-1. 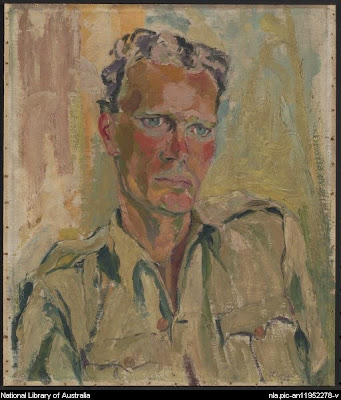 Lina Hallenstein was born in Hamburg in 1909 then the family moved to Australia. Forwood showed some of the conflicting and complementary parts of Bryan’s unusual life: part of an established Australian Jewish family, yet exposed to Europe’s non Jewish treasures; raised in a privileged, upper middle class family yet friends with impoverished immigrants; growing up in an era of stable Edwardian values, but belonging to the post-WW1 era of experimentation.

I’d loved to have known more about her relationships with her both sides of her well documented family, the Hallensteins and the Benjamins. We know of their connections in Australia and New Zealand, but we have no sense of their influence. Cousin Charles Brasch seemed to be the only relative with something to say about Lina’s career. There was even less information about husband Baynham Bryans, father of her only child. What happened to him? And what happened about the raising of Edward, who boarded at Geelong Grammar? 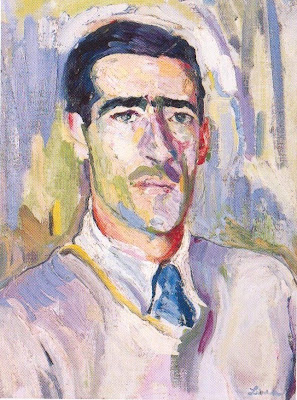 Bryans art career didn’t involve formal enrolment in art school. She was probably influenced in the early years by Iain MacKinnon, the Scottish watercolour artist. He opened up the world of modern French art to her, and took her to galleries and exhibitions.

Then she met William Jock Frater, the man who had the greatest influence on her career. Frater had studied art in Glasgow, London and Paris, then came to Australia to assist at the modern art school. He was the father of Post-Impressionist, Cezannesque art in Australia. Frater’s modernism liberated his own work from convention and in turn influenced younger artists, above all Bryans.

She worked for some time in his Little Collins St studio, and finally decided to become an artist herself. One of his most famous and beautiful NGV works was the Red Hat 1937, a study of Bryans! Look it up so you picture Bryans as a young, modern woman with an eye for looking sharp. But also to see Frater’s fine use of colour in modelling that so influenced Bryans in her own work. Frater also did a larger and cooler Portrait of Lina Bryans 1940. Excellent portraits by Bryans can be found in Figuration Féminine blog

Artists Adrian Lawlor and his wife Eva Nodrum had lived in Warrandyte, and during the late 1930s were hosts to Bryans, Frater and Alan Summer.

Lina was a risk taker, and not just in her Bohemian life style. Of course all modernists took risks; they may not have found patrons amongst conservative art buyers. But Forwood showed that women artists took even greater risks: travelling overseas, using modernist styles disliked by critics; pursuing career at the expense of family. Even then, Bryans' personal life was marked by upheavals: relationships were hot then cold; she moved around the state; her family was shocked. She was what was called a New Woman, a free spirit. Bryans lived in the city, spent much time with a man not her husband (Frater), socialised with newly arrived immigrants, shocked her parents, and wrote, painted and partied whenever she chose. 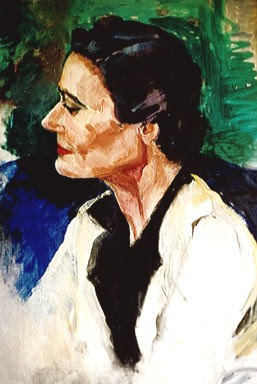 These behaviours may have been a problem for an artist whose sole income came from selling art, but Bryans was financially independent. Patronage might have been a problem, considering her status as both an untrained woman artist and as a modernist. Yet she did have patrons! Her canvases were sold to keen buyers, donated to public collections or given to friends.

Lina’s first public success was at the Heidelberg Town Hall in 1937, then Warrandyte and the Herald Exhibition of Outstanding Pictures. And in 1940 she joined the Melbourne Society of Women Painters and Sculptors, exhibiting with them for decades. Women artists worked together, dealing with workplace and family commitments, economic survival and sexism. Here Bryans met Australia’s best women artists: Clara Southern, Ethel Carrick Fox, Dora Serle, Janet Cumbrae-Stewart, Isabel Hunter Tweddle, Ada May Plante.

Then artist Norman Macgeorge and his circle started inviting younger artists to the Heidelberg area to paint. Bryans and her friend Ian Fairweather were pleased to accept. Soon Bryans bought an old hotel, Darebin Bridge House, which became a cultural hub for artists and intellectuals. Like the Reeds at Heide, she played an important nurturing role in Melbourne’s art world.

Bryan’s portrait of Jean Campbell was named after Campbell’s novel, The Babe is Wise. The title was appropriate. Firstly Campbell’s novel studied the responses of a European family who had emigrated to Australia, as the Hallensteins had done. Secondly the portrait was witty, cool and full of female independence. These values were as applicable to Bryans herself as they were to Campbell. Her paintings had flat shapes and strong impressionistic colours.

Prof Jock Marshall, distinguished Australian botanist and writer, became noted as an advocate for environmental and conservation issues. When the war with Japan was over and Jock Marshall had been demobilised, he came to Melbourne. Lina quickly did a very probing portrait of him, still sick from the war in New Guinea but energetic.

Post WW2 Bryans became very busy again. She went back to her beloved portraits, including those of important creative and scientific Australians. She did a wonderful portrait of the philosopher Bruce Benjamin. Queensland Gallery Director, Robert Haines c1955, was another significant but small painting. And there is a good portrait of writer Nettie Palmer 1959 in the National Library. Nettie had been an important literary reviewer before the war, and continued her work as an editor, diarist and woman of letters. The two women admired each other’s work. Barbara Falk was an educationalist who Bryans admired enormously.

My favourite portrait is of Lina's oldtime friend Laurie Thomas, painted in the year he was appointed Deputy Director of the National Gallery of Victoria. Thomas was very grateful to Bryans for introducing him to Daryl Lindsay and for helping him on his art career. Thomas' next position was as Director of the Art Gallery of Western Australia.

The National Library has acquired a Bryans portrait of the Melbourne artist and writer Adrian Lawlor, painted in 1964. This portrait was shown at the Ian Potter Gallery in Melbourne University, as part of an exhibition devoted to the portraits of Lina Bryans. Lawlor was done in the Fauvist style, with strong colours such as red and yellow reflecting the personality of the sitter. 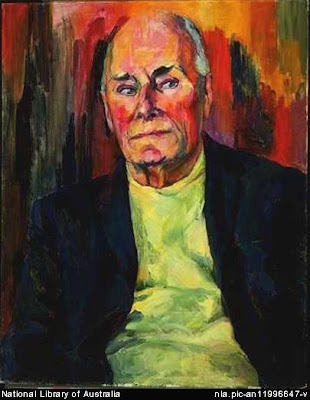 To understand her real contribution to Australian cultural life, I have focussed exclusively on Bryans’ 70+ portraits, painted between 1937 and 1974. These portraits of her friends formed an impressive visual record of Melbourne's cultural glitterati. In any case, I did not enjoy her landscapes nearly as much.

Obviously Edward is alive and well

Dear Helen,
I love our portrait! Sur that Lina Bryans had love to peint you...
(aïe aïe aïe...my english!!)
I wish to you a good day

The portraits are wonderful, but the woman seems completely fascinating - witty, cool and full of female independence, indeed (a great sentence in its own right!).

I love to hear about such women; they are an example to us all.

Like Melissa I also knew about Alex Jelinek's very long standing relationship with Lina Bryans. And it seems that they were both friends with Wolfgang Sievers, another European modernist who arrived in Australia during the war.

melissa
what a great obituary... full of information. I was looking for Jelinek in another context and found your excellent comment.

Apart from the connection to Edward, I found this information interesting. "Jelinek's remodelling of Lina Bryans's home in Albert Street, East Melbourne (1956), and an extension for her at Erin Street, Richmond (1958), were his other built works". Now that is what I call a close working relationship :)

palace
look at this - a photo by Jelinek of Lina Bryans painting Brita Sievers' portrait. It was taken in Melbourne in 1958.

In 1940, I know that Lina Bryans rented a room in Darebin Bridge House, where artist Ada May Plante also lived. Darebin Bridge House became a bit of a meeting place for the very literary Meanjin group. You can easily find Bryans' portraits of author Alan Marshal, for example.

I am so sorry about your dad's painting. The only comments I found about it were, as I am sure you know, in Darebin Bridge House and the Art
Establishment 1940-1945
http://chloebrien.files.wordpress.com/2012/04/picturebook_layout.pdf

re the reference I found on Darebin Bridge House, have a look at how modern, independent women created a supportive community for themselves.